The training to become a certified crust expert is difficult. One of the unsuspected consequences of Terminal Sound Nuisance is that many young, and arguably worthy, punks were actually inspired by my immense knowledgeabililty and the respectability that it confers one. I expected hordes of fans simply bowing before my greatness, kissing my oversized flashy Antisect signet ring and overall feeling a cultish adoration toward this enterprise. And instead, I see too many kids with a bright future but slowly losing faith upon realizing what it truly takes to become a crust superstar. The training is hard and requires a heavy discipline not quite unlike a Jedi's in terms of dedication, daily humiliation and dodgy-looking greenish geezers. Also it is very reminiscent of the Tough Enough show, only you've got me instead of Stone Cold Steve Austin and you listen to the Hiatus discography instead of slamming cocky bastards on a mat. 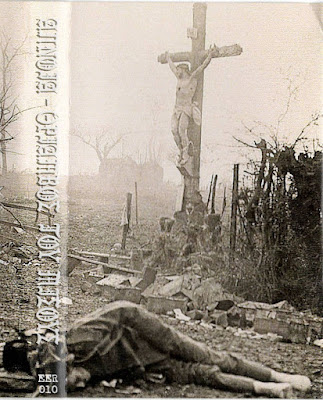 During a particularly demanding physical lesson with my crust sensei years ago (I still had flamboyant hair, so that was a while back indeed), he told me sternly after I had just completed a thorough analytical essay called "Visual Bristolness in the Work of Early Osaka Crasher Crusties: a Critical Perspective on Crust Pants Referentiality" that, sometimes, "less is more and more is less". Now, that is exactly what my laziest bandmate would say when they cannot be arsed to do something properly and have to hide that they have no idea or inspiration about that riff they were supposed to bring to practice. I guess many people feel witty with such a mantra as it makes them look like they have a grasp on aesthetics theory and on the first Doom demos. That is pretty much what I said to my sensei. He told me "too impetuous and arrogant you are, you French bastard" and then passed out in a pool of his own vomit as part of the next lesson about finding the right recipe for your special brew.

Άπνοια perfectly embodies the concept of "less is more" when it comes to crust music. Simple, fast and loud and always tasteful 90's style eurocrust with a raw production and a lot of anger to show. No fancy elaborate distortion or fuzz or overwhelming effects on the vocals or epic narration, just direct, honest, pissed crusty hardcore punk. And you need this kind of bands in the crust game and I, for one, always welcome them whole-heartedly when they display that straight-forward crust vibe, not out of intent or a sense of eurocrust intertextuality, but just because it is basically good and a perfectly valid way to do the crust. In that unpretentious way, they remind me of Đornata not because they necessarily sound like them but because they keep things simple. 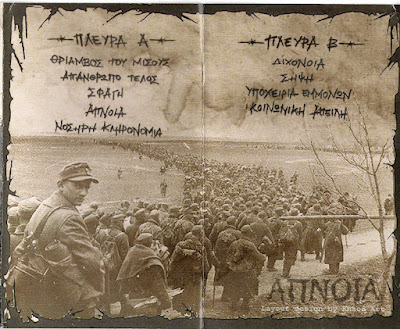 The band apparently formed in 2004 but did not record anything before 2014, which is a little odd indeed and one could venture that Άπνοια might have taken the "less is more" philosophy too literally and heartfully waiting ten years to release their first demo. They are from Kozani not so far from North Macedonia - as they now call it - and if you are a reader of the blog you are well aware of how much of a sucker I am for Greek crust (see my study of the genre here) so that Άπνοια were bound to catch my attention. However, and rather paradoxically, Άπνοια are not really a "Greek crust" band. Of course, they are from Greece and playing crust punk, but their music cannot be said to sound like traditional Greek crust stylistically. In fact, if the band did not sing in Greek, I probably would not have been able to discern their origins (clearly continental Europe and not Scandinavia though), but then perhaps my sensei would have. Άπνοια remind me a lot of 90's Polish crust punk in fact, of classic bands like Silna Wola or Sanctus Iuda, also of '93 era Hiatus and even of Tijuana crust punk act Coaccion for the crude directness and aggression (but maybe I'm still a bit drunk from last night). They are not exactly heavy and hyperbolic - although the music is certainly dark, pummeling and angry and the riffs are aptly Scandi-inspired - so I suppose the cavemen crust tag would not fit. In any case, they do not sound at all like Χαοτικό Τέλος (even if they did cover them in their early days), Ναυτία or Ψύχωση.

Their clear dis-hardcore sonic basis is improved by a brilliant vocal works pointing to the classic crust school with a main vocalist, whose raspy and very angry tone reminds me heavily of Πανδημία's amazing singer (not many can claim to be able to make the listener feel that he or she is being grasped by the proverbial collar and given a proper bollocking in a pure demonstration of anger), and a second one who is more on the grizzli-crust side of things. A good pairing that especially since Greek sounds so seriously furious and desperate when applied to heavy punk music. Θρίαμβος Του Μίσους is a real album clocking at 25 minutes made up of 8 songs of raw eurocrusty discore and one number, "Διχόνοια", that is an absolute gem of classic 90's Greek metal-crust with brooding apocalyptic epics and a great sense of storytelling that sees Άπνοια showing that they also can pull out Χαοτικό Τέλος-inspired crust, the multitalented bastards. This recording would easily deserve to be reissued on vinyl. This is raw and genuine pissed crust punk. 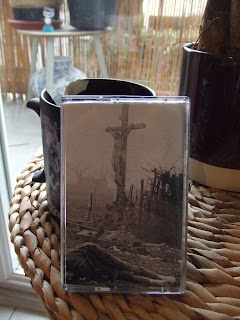 Θρίαμβος Του Μίσους was released in 2018 and is undeniably the band's strongest - and crustiest - work. Do check out the rest of their discography if you are craving for raw dis hardcore with a bit of thrash punk. It was put out on tape by Extreme Earslaughter the label of Vagelis from the mighty Παροξυσμός and literally tons of other hard-hitting bands (he is actually rumoured to be a robot). If you are not familiar with his work with the label, let's just say that it is magnificent resource for rare obscure old-school Greek crust (finger heart) and extreme metal bands, but also contemporary DIY hardcore punk. The tapes are always very limited, 100 copies, but they are uploaded onto youtube. Do check them out as it is clearly a labour of love. 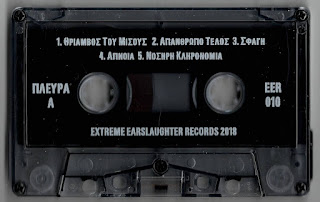 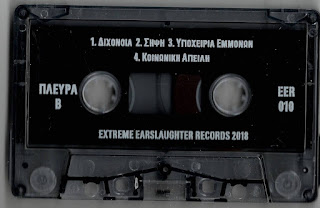 Posted by The Earslaughterers at 14:44