If one was to conceptualize the various creative artistic dynamics as well as the conceptual theory underlining the d-beat genre as praxis and philosophy, one could say that the D is endlessly self-sufficient. One cannot bring anything truly new to d-beat nowadays, as it is in the constant reworking of the original material and simple formula and in the intensity of the delivery (amount of distortion, vocal flow, rawness and so on) that a solid d-beat performance must emerge. However, what can be achieved through Discharge love is more difficult and rarer to do with other punk bands which has a lot to do with the systematicness of Discharge. Still, strict Doom cosplay has been a rather consistent practice for almost three decades, although the number of candidates is limited when compared to Discharge or even Disclose, and more particular instances like SDS who passionately emulated Antisect (and Disturd emulating the emulators in turn) do show that bands can conceive indeed an utterly consuming love for a classic band. And if anything, Amebix can be said to be an absolute classic, therefore prone to be carefully imitated. 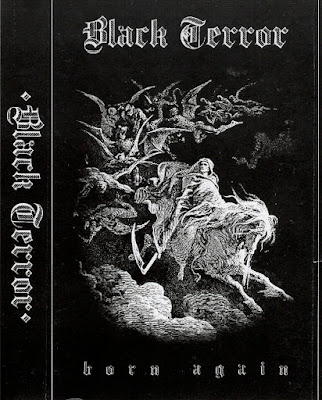 Enter Black Terror from Singapore, an obscure band from the mid-10's bent on worshipping Amebix with all their heart and whatever musicianship they were able to muster in order to reach that noble goal. Of course, Amebix has had a massive influence on so many bands that a careless reader could be inclined to think that Black Terror band were not in any way unique or different as hundreds of Amebix-inspired bands can be listed, even renowned bands like Misery or Axegrinder for example. And that careless reader, in spite of such insolence that would normally get him or her dismissed from class, is not wrong. But here we are not just talking of an Amebix influence or inspiration, we are dealing with an Amebix impression. Even in this very restricted filed, BT have not been the only ones. In the early 00's Zoe from Osaka walked the same walk with even greater determination (see my magnificent piece about The Last Axe Beat Lp) by merging both Amebix and post-Amebix (the legacy of Zygote) in an act of synthesis, early Acrostix very much worked in a synth-driven Amebixian crust as well while the project Axeman was an act of Amebix worship coming from the underground metal world rather than the punk scene. BT must be seen in a similar light. But to a certain extent only, not because their Amebix reenactment is less accurate or powerful than Acrostix or Zoe's, but because on Born Again it appears to be a part-time activity. I know. 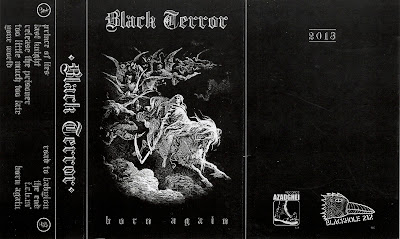 BT were an obscure band and I cannot find much information about them or the members, which is not so common in the age of hegemonic availability. They are a bit mysterious if you like. To be fair, the name "Black terror" does not exactly help on that level and I will leave to your imagination what typing "black terror singapore" in the Google or Youtube search bars result in. In fact, the name may be considered as a rather bad idea, not the worst possible idea - great bands going for much worse names are easy to come by - but probably too metal-sounding for their own good. Discogs tells me that there are at least three other bands called Black Terror. Two are unsurprisingly black-metal bands, one from Peru armed with corpse paint, an inverted cross and a song entitled "Sodomy and extermination" which sounds a little extreme and an other from Czech with a shite undecipherable logo and a demo called Let's Annihilate the Whole World, Fucker!. Needless to say I'd rather have a drink with the second one. Things get stranger name-wise with the London-based indie rock band called Fifty Tons of Black Terror (?) and the hip-hop singer Sgt Black Terror a character that sounds more like a 90's wrestler than a street gangster. So you see, the task was herculean. 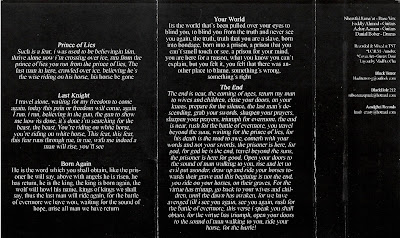 But let's get back to the music. As I mentioned, BT can be said to be working half-time at the Amebix factory. And they do work hard. The brilliant rocking, groovy but raw and organic production gives the recording a genuine old-school feel that fits the Amebix style perfectly. "Prince of lies" freely borrows riffs and lyrics from "Largactyl", "Last knight" opens with a piece of delicate singing (and kinda shamelessly tuneless although I appreciate the effort) just like on "Sunshine ward", "Born again" starts with typical Monolith-ish arpeggios and has a darkest heavy "Coming home" meets "Beyond the sun" vibe and of course, it feels redundant and almost silly to have to point it out, there is a cover of "ICBM". If Born Again was only made up of those four songs, it would be the ultimate performance of Amebixness. But there are five other songs on the tape that sound noticeably different - no ska though. Heaviness is still of the essence but the influences vary. On the whole there is a strong Celtic Frost influence running through them, especially in the vocals at times, but the song "Too little much too late" is clearly a loving nod to Inepsy and the dirty old-school crust feel of "The end" and "Your world" strongly reminds me of the great Coitus (who were themselves a blend of Celtic Frost, crust-era Antisect and punk-as-fuck 90's squats so it does make sense). 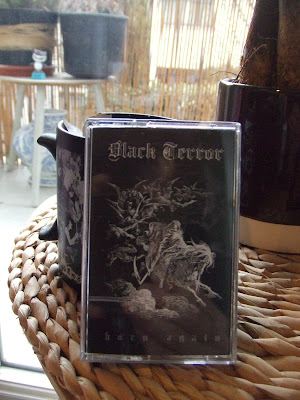 There is a certain sense of disparateness at times, especially when the "motörcrust" influence becomes too strong (fortunately it does not happen often), but the tape is definitely good in terms of songwriting, sound (reminiscent of 90's crust) and metal-punk energy. The fact that it is not more widely known is quite astonishing but it may have to do with their country of origin and the difficulty to widely distribute recordings from bands located in South-East Asia despite very active and qualitative labels from this part of the world. Who knows, maybe BT are considered as the classic Singaporean crust band over there? I must confess I am quite unknowledgeable about that scene although I greatly enjoy cracking bands like Blinded Humanity (who appeared on the great Singapore Punk Holocaust compilation cd) or Lifelock and hopefully I will be able to write at length about such bands in the future before I am old, lonely, embittered and deaf. Born Again was released on Azadghei records, a reliable Singapore-based label that has released some solid materials from Blinded Humanity, General Enemy or Zudas Krust. 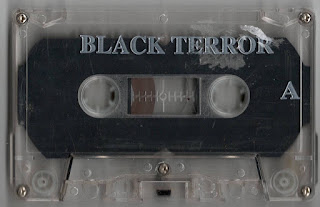 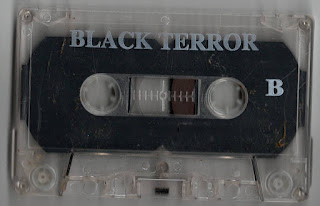 The visual is a little underwhelming and a more striking cover, or just a crustier one maybe, would have probably encouraged more people to give it a try and realize BT are really good at what they do, that unique raw and rocking blend of orthodox Amebix love, Frost and Coitus. And I give them credit for crediting Gustave Doré. I'm sure he'd have enjoyed that.
Amebix born again
Posted by The Earslaughterers at 09:55