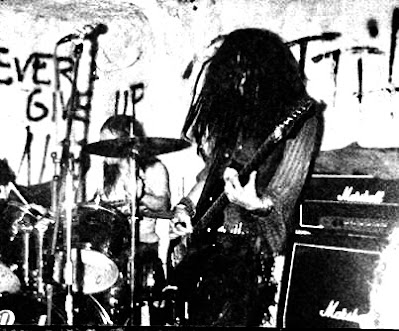 If you must know the truth, I spent the last month in a secret crust monastery which accounts for my temporary absence from this respectable - without mentioning influential - blog. Not unlike in Karate Kid, but with high-brow punk shirts and tragically more pronounced receding hairlines, I needed guidance about the next step that had to be taken in my quest for the meaning of life, and by "life" I mean "crust", again. In the temple of crust, discipline is strict. Drinking water is banned and has been replaced with cider and anyone caught showering is severely punished, while the hideous sin of listening to neocrust systematically results in public flogging and lifelong excommunication from the Crust Society (you don't want to know what happens if you're caught enjoying shoegaze). During the retreat, one is expected to listen exclusively to old-school crust music - be it of the stenchcore or cavemen variety - and it is required that you pray for long hours each day in the traditional crust position of meditation: barely sitting on a filthy floor with your back against a wall while holding on to a half-empty bottle of special brew and muttering the lyrics of "Relief" or "Drink and be merry" ("Stormcrow" or "Grind the enemy" are also perfectly acceptable alternatives). Only then may the Revelation occur and only the chosen few are able to attain real illumination before prematurely dying of cirrhosis. I came home exhausted but enlightened, with a halo of flies around my head determined to zealously spread the Word of Crust and to convert as many doubters as possible through impeccably curated compilations of UK crust music.
The elaboration of those UK crust compilations was the logical step after our intense coaching session in mastering the proper crust lifestyle, Ten Steps to Make your Life CRUSTIER Starting Today (by the way, I hope you have all become decent soap-dodging noize freaks). The idea behind their making is to offer a fairly comprehensive view of a specific time and place in order to establish and define some descriptive criteria and approach this punk subgenre that has come to be known as "crust" from a contextualised, diachronic perspective that both stresses significant stylistic similarities and reflects a common vibe and tension while also illustrating a diversity in paces, textures and intents that you will not fail to notice. A walk in the fucking park. The selecting process was not an easy one. Actually, the last version of the compilations (several failed attempts preceded, I'm sorry to say) has been ready for two weeks now but I wanted to make sure that, not only did they sound powerful and balanced, but also that they told the right story, that, through my narrative choices, you could get a relevant idea of what crust really is and what it expresses, what cultural moment it embodies, namely the collision of anarchopunk, hardcore and extreme metal in the British soundscape of the mid-80's. The task was extremely fun but also somewhat ambitious and you would be surprised to know how hard I thought about the inclusion or exclusion of some of the bands (Bolt Thrower to give you an example).
In the end, you get two compilations of 95 minutes each, thus roughly respecting the classic mixtape format, with 58 bands in total (including bands from the Republic of Ireland) and 62 songs, spanning a decade, from 1985 to 1995. Working with both 80's and 90's bands made sense for several reasons. First, it illustrates how the genre survived and evolved after all the founders called it a day, how the new generation of bands considered and reworked the original crust sound. Second, too often we tend to erect a wall between the 80's and the 90's, retroactively glorifying the former and discarding the latter, as if there were major epistemological differences in the making of punk after 1989, and I believe the transition between the late 80's and the early 90's was very fluid, the major change being the rise of the cd format at the expense of vinyl in the music industry. 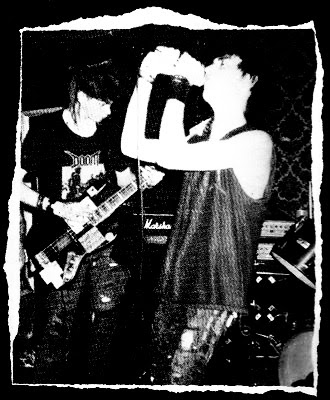 Some choices were delightfully comfortable and picking songs from the undisputed classics of the genre felt strangely rewarding. On Echoes of Crust you will of course enjoy a display of the official canons of UK apocalyptic metallic crust in all their glorious power (Deviated Instinct, Hellbastard, Axegrinder and the likes) that have built the genre on the sound of the two founding fathers, Antisect and Amebix (however, I chose to leave out the Bristol style of noize, though bands like Chaos UK and Disorder certainly played an important role in the rise of crust). The school of cavemen impersonation of raw and furious hardcore punk is also well represented through Doom, Extreme Noise Terror and their enthusiastic followers. You will also find bands that do not really fall under the crust umbrella on this exploratory celebration of crust music such as fast political hardcore acts like Generic or Electro Hippies, metal-punk crossover ones like Sacrilege and Concrete Sox or obscure grindcore units like Grunge or Drudge, all of them delivering songs that nonetheless exemplify that crunchy heavy crust vibe that I am always looking for, hence their inclusion of these compilations. Some would even probably argue that the metallic industrial sound of Sonic Violence or the groovy straight-edge hardcore take of Ironside have no place in the selection, which I can understand, but even unintentional, a crusty vibe does permeate some of their works and, at the end of the day, it also provides some interesting variety to the mix.
The sound quality varies a lot as there are rough live or sloppy rehearsal recordings as well as rather clear near professional production and although I have done my best to equalise and even up the levels (without mentioning that many rips come from my own collection), it was near impossible an endeavour at times even for a computer genius like me. Some songs are actually hard to listen to, but it would feel incomplete to have a crust compilation without a proper sonic challenge (I'm thinking really hard about Violent Phobia and the enigmatic Angry Worta Melonz here), right? I tried as much as possible to select songs or versions of songs that were not too obvious in order to keep things interesting and, perhaps, even surprising.
Massive thanks go to all the bands for writing such great (and, well, even objectively not so great) music. Crust music has always been a massive part of my life and hopefully, through these humble compilations, I managed to convey a real sense of crustness and meaningfully tell the story of the genre. As for you dear listeners, I hope you enjoy this journey into the first ten years of the genre, inside the cradle of crust. 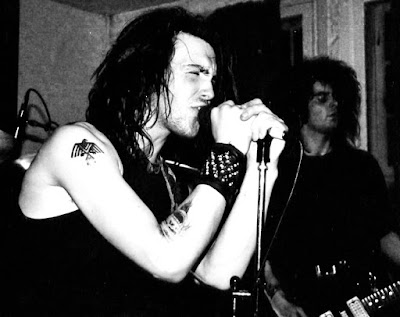 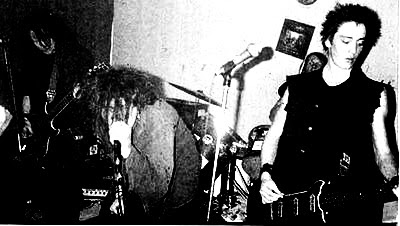