This is the last stop of The Tumult of a Decad, it has been a pleasure as usual, thank you all for coming and please make sure to sign the guest book on your way out. Ta. I honestly could not think of a better band than Terminus to end the series, first because of the band's name (pretty subtle, right?), second and more importantly because Terminus were one of the most unique bands of their time. Like Indian Dream, Terminus are no newcomers to Terminal Sound Nuisance since I have already raved about them on two occasions, for the Eight Years Too Late article (here) and the Endless Struggle compilation double Lp (here). 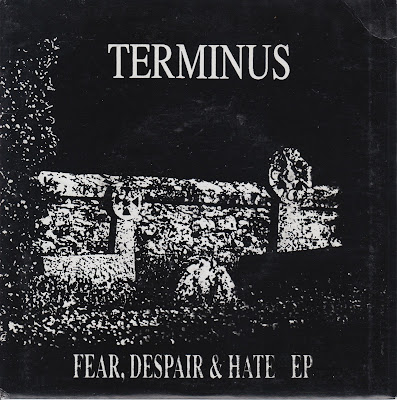 I know the term "unique" is being used so often and in such a lazy way when discussing music that it has become almost meaningless and, ironically, a bad sign. When I am being told that a band is "unique", I instantly think that it must sound like all the other ones similarly characterized as being "unique", as if the adjective was purely descriptive and a reference to a preconceived set of specific traits that - for some reason - were deemed reflective of "uniqueness", as if bands could claim to play "unique punk-rock". Know what I mean? It is all very silly and bourgeois in the end since being "unique" is possibly the most pregnant obsession of the middle-class that is always so terrified to be perceived as being "like everybody else". But then, you can be "unique" and terrible at the same time... Anyway, Terminus were genuinely unique and like most unique bands, they were pretty much a Marmite band which you either loved or hated. I remember a particularly nasty review of The Graveyard of Dreams cd in an issue of Gadgie which stated (from memory) that it was "shite on toast". There were also very positive reviews of Terminus' works, of course, but the good as well as the bad ones all had one thing in common in that they struggled to define the band's sound and find relevant points of comparison. Terminus have been compared to The Damned, The Mob, Motörhead, Anti-Nowhere League, Bad Religion, Naked Raygun, The Stranglers, Subhumans, Hawkwind, Bauhaus, Amebix... And as endless as this list might be, I would gladly add Leatherface, Social Distortion, Cult Maniax, The Dark, Ritual and The Misfit to it. 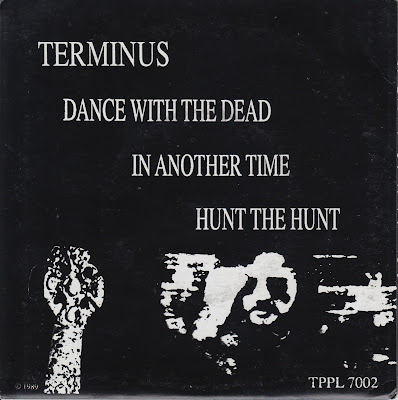 The trouble to aptly locate the band in a relevant frame of references and influences teaches us three important things. First, that the music of Terminus escapes easy categorization. Second, that we often project our own musical background and reference system onto a band we struggle with. And third, that, in spite of the apparent difficulty to correctly grasp Terminus, the band still reminded all the reviewers of a familiar band (even very unlikely ones sometimes). This last point makes Terminus a band that sounds both familiar to an experienced amateur of punk music and yet remains strangely undefinable and out of reach because it resists easy musical parallels. The best thing about all this was that Terminus did not consciously set out with the idea to sound like no one and everyone at the same time (quite a feat if you think about it), like your run of the mill, ordinarily mediocre, self-absorbed arty indie rock band from a university city would have. They just did their own thing and wrote music while keeping in mind the diverse tastes of the band members (and there have been quite a few of them in the band's history). Another element crucial to the making of Terminus was that the band took its time. Very far from the quick prolificity that was usual in the 80's (with the short-livedness that often came with it), the band waited almost four years after they formed in 1983 before releasing their first Ep, which would be unthinkable for most bands by today's standards.

Terminus were from Scunthorpe, a steel town in the North-East, a place I know so little about that I cannot think of another punk band from there. They recorded three demos before the first Ep: a self-titled one in 1984, then Catalog of Crimes in '85 and finally Body Count in '86. They are interesting listens, quite low-fi and cover a large musical scope in terms of genres, from '77 punk-rock, to fast and tuneful hardcore, goth-punk, folk music, heavy rock and psychedelic punk, while remaining cohesive works at the same time, without that patchwork feel I always dread, all tied up with great dark tunes, a rocky vibe and a sense of warm melancholy and combative pessimism. I am tempted to bombard you with parallels and comparisons right now but it would be a pointless effort so let's just say it sounds like heartfelt, rocking but dark anarchist punk-rock. 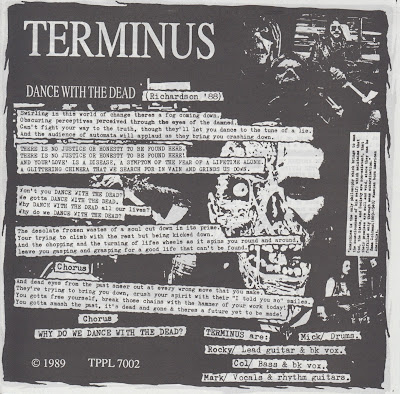 The Star Born Thing Ep, self-released in 1987, confirmed the band's potential and gift for catchy hooks and cracking tunes. It also epitomized what Terminus did best, writing paradoxical songs that sound dark and rather desperate but still retain some human warmth and organicity. In that sense, they are completely romantic and the lyrics certainly reinforce that feeling with "Star born thing" being about social otherworldliness and "(Waiting for the) purge" telling the story of a revolutionary waiting for his executioners to take him. The evocatively named second Ep that interests us today, Fear, Despair & Hate, was released in 1989 on Terminus' own TPPL Records. It has a rockier production than its earthy-sounding predecessor and is a strong, powerful follow-up. I suppose you could compare it with that strange, loner kid from school, the odd one out that still somehow belongs. When compared to what British punk sounded like in the late 80's, Terminus had no equivalent but still managed to fit in the punk-rock family, albeit on the edge of it (not unlike Crow People perhaps?).

The Ep starts with a rather macabre metal-tinged ballad (yes, you read that right) called "Dance with the dead". It is a long, heavy and epic number which stands out in the band's discography with over-the-top guitar solos and borderline cheesy riffs. And although I would not listen to a whole album of such songs, it works remarkably here thanks to the intense singing of Mark Richardson, full of passion, melancholy and indignation, and great, moving lyrics about the power of illusion and the doctrine of unavoidable defeat that the powers that be impose on us. It contains some memorable lines like: "Your 'love' is a disease, a symptom of the fear of a lifetime alone. / A glittering chimera that we search for in vain and grinds us down." The second song (my favourite) is "In another time" and is a faster, rocking one, with a depressive, atavistic and eerie The-Mob-meets-Motörhead-and-GBH feel. Despite the dark, hopeless lyrics about the impossible fantasy of a better, more fulfilling world, the song feels warm, uplifting even, like a bizarrely desperate feelgood song. The last one, "Hunt the hunt", is an anti-hunt fast hardcore number that sounds like Bad Religion having a drink with Leatherface (but probably not, they are just so frustratingly impossible to categorize). 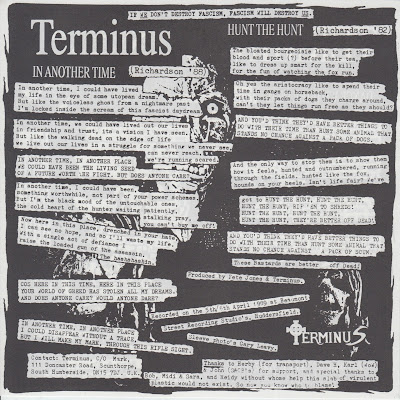 Terminus released two brilliant albums and three more Ep's after Dear, Despair & Hate that are all highly recommended if you need a revolutionary romantic punk band with working-class politics, fantastic tunes, deep moving vocals and - gasp - variety in their songwriting. The review of this Ep that was published in NME in 1989 said this: "Back to basics, dole boy rock, unimpressed, primitive and powerful". Pretty fitting.

Terminus have a thorough website that I encourage you to visit. 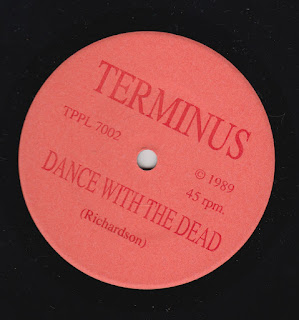 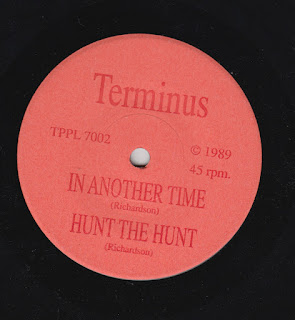 Fear, despair & Terminus
Posted by The Earslaughterers at 18:23 3 comments: