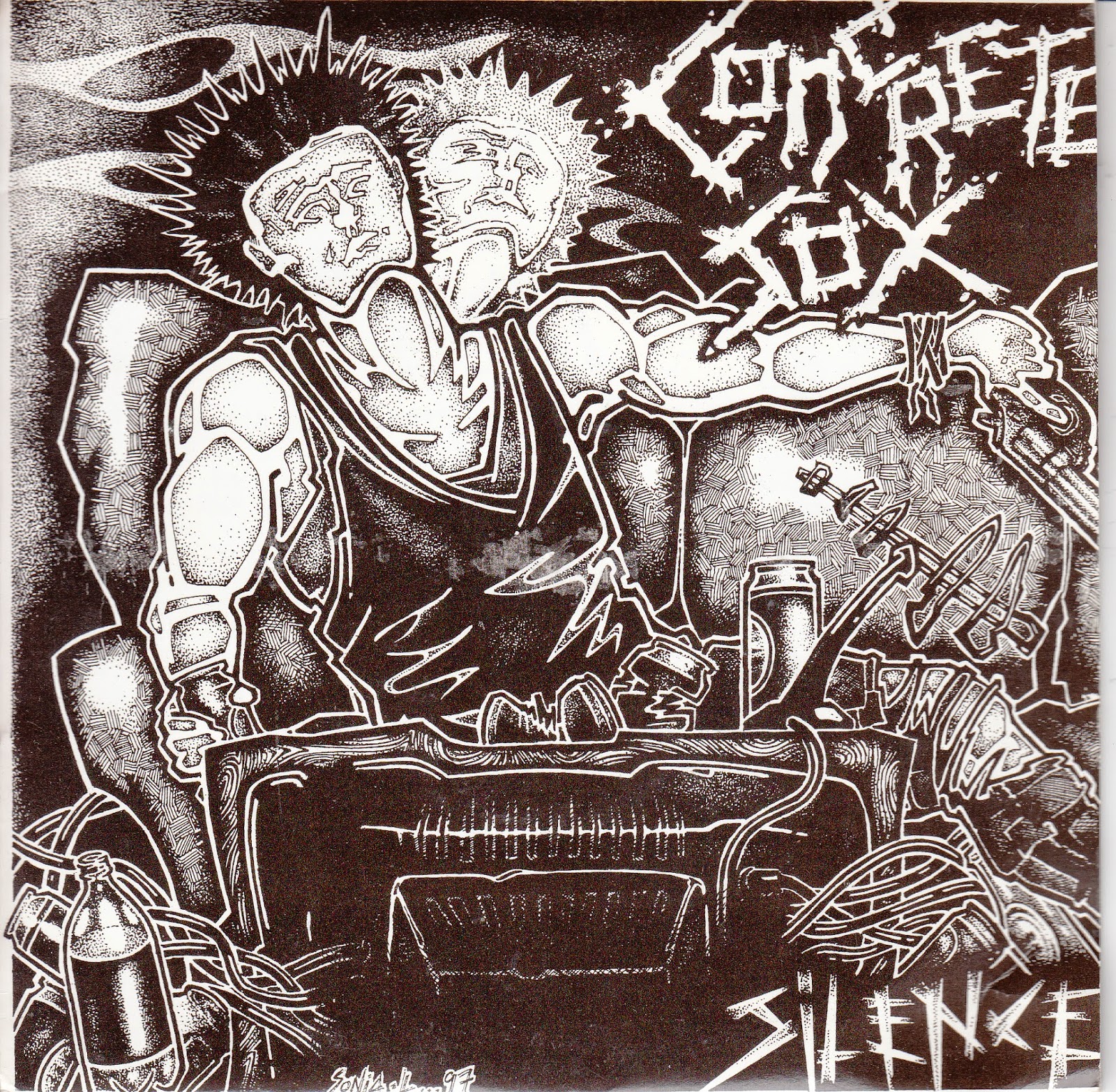 It's been more than two weeks since the last post and I won't probably be able to post much in the next couple of weeks either, with summer being the time for boozing outdoors rather than being all nerdy behind a computer screen. But then, I might also be summoned by the unholy god of punk geeks and wake up in the middle of night, instructed to rant over some obscure songs no one really cares about. So who knows? I'm a man on a mission after all. 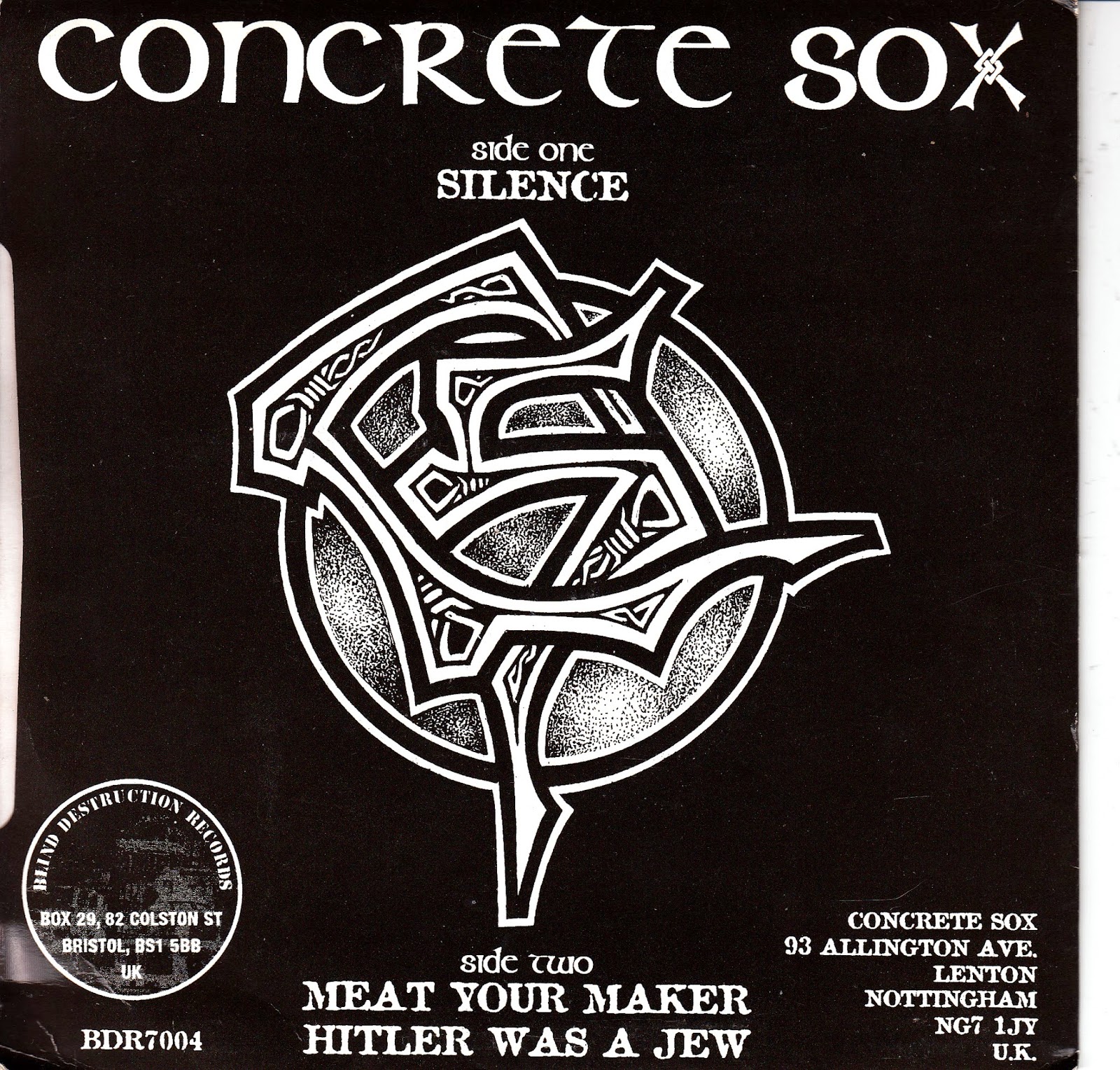 I already posted an Ep from the mighty Sox a while ago, a live recording from the late 80's that saw the band at the apex of their power in that decade. Although the band's best work remains arguably "Sewerside", it should not be forgotten that the Notts band kept playing and releasing good records in the 90's. "No world order" is a solid album despite a couple of fillers and "Silence", the Ep we are dealing with today, can be seen, in the light of the 90's British hardcore-punk wave, as a potent punk record too. 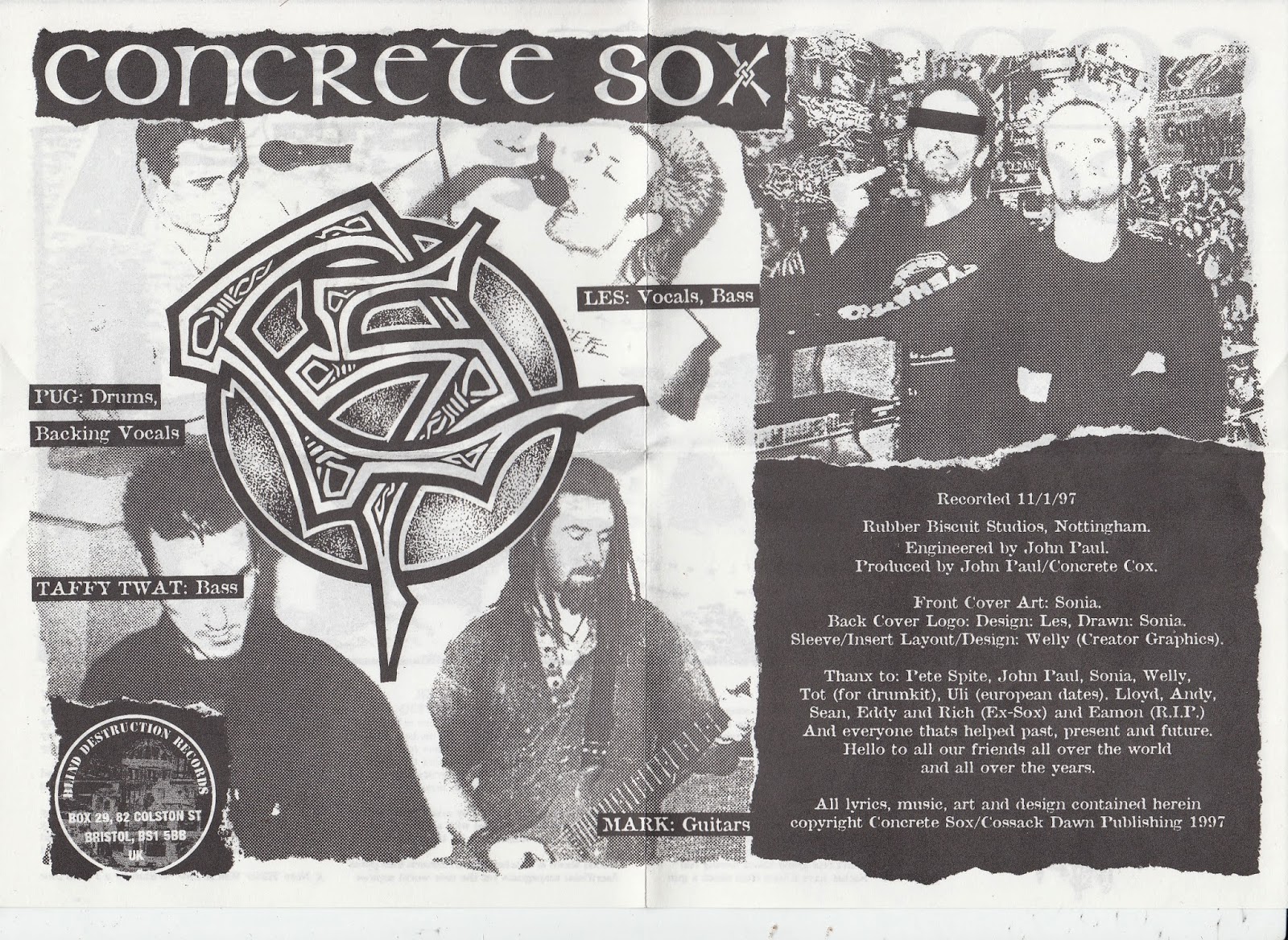 For some reason, "Silence" seems to be one of the lesser-known records by Concrete Sox. Indeed, it is not even mentioned in the band's chapter in "Trapped in a scene". I am guessing that they were no longer playing many gigs by 1997, though the internet mentions that they did some dates in the UK around 1997 and 1998. In any case, the line-up playing on this Ep did not last long and it is the only Sox record in which Les (usually on bass) does the vocals. In fact, by 1999, the only remaining member of this line-up would be Mark on guitar. The fact that it was recorded by a brief line-up that did not really play live at the time could be the reason why "Silence" is not often mentioned or even known. Although certainly not a crucial record in the band's history, "Silence" remains a solid effort and exemplifies what hardcore-punk sounded like at the time in the UK. It is hard-hitting, heavy and fast, and unpretentious. The bass is upfront and has a beefy distorted sound, the guitar parts demonstrate how metal-punk should be played, the drummer does a fine job in the "powerful pummelling" section and the vocals are aggressive and snotty, with heavy nods to classic mid/late 80's metallic punk. There are of course elements of the vintage Concrete Sox sound but I'd say that it is more relevant to listen to this record as a piece of the more global 90's DIY punk sound that prevailed at the time, with bands like Spite, Substandard or, even more so actually, 90's-era Final Conflict on the other side of the pond. 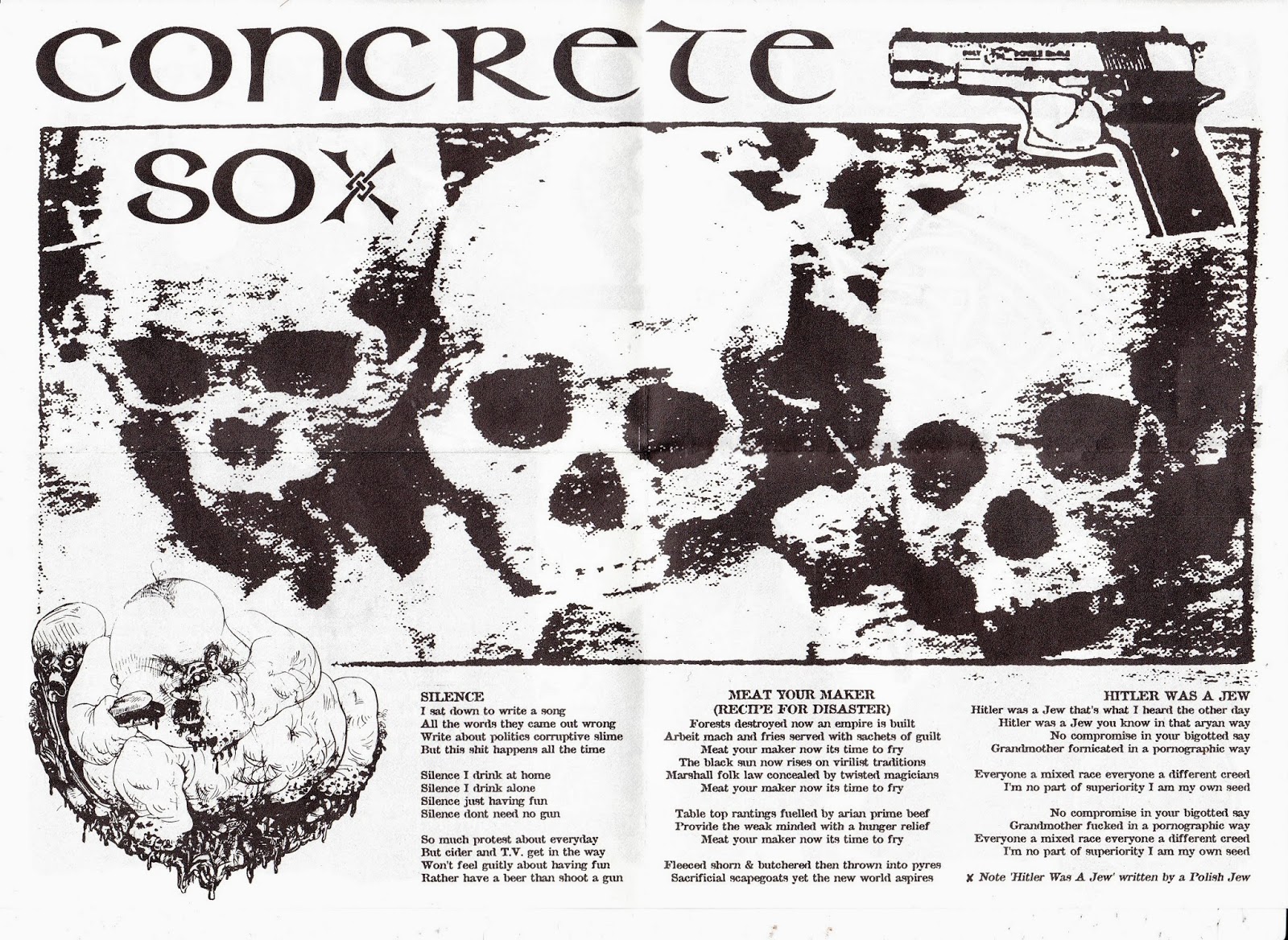 Lyrically, the three songs are pretty interesting too with "Silence" being about apathy and the relief one may find in TV or drinking; "Meat you maker" being about the meat industry and the symbolism that surrounds the consumption of meat; and finally "Hitler was a Jew", that was apparently written by a Polish Jew and is a song against prejudices and racism. The Ep was released on Blind Destruction Records, a still active label based in sunny Bristol and run by a bloke from Spite that also put out records of the Restarts, In The Shit, Spite (obviously) or more recently Bring to Ruin and Poundaflesh. 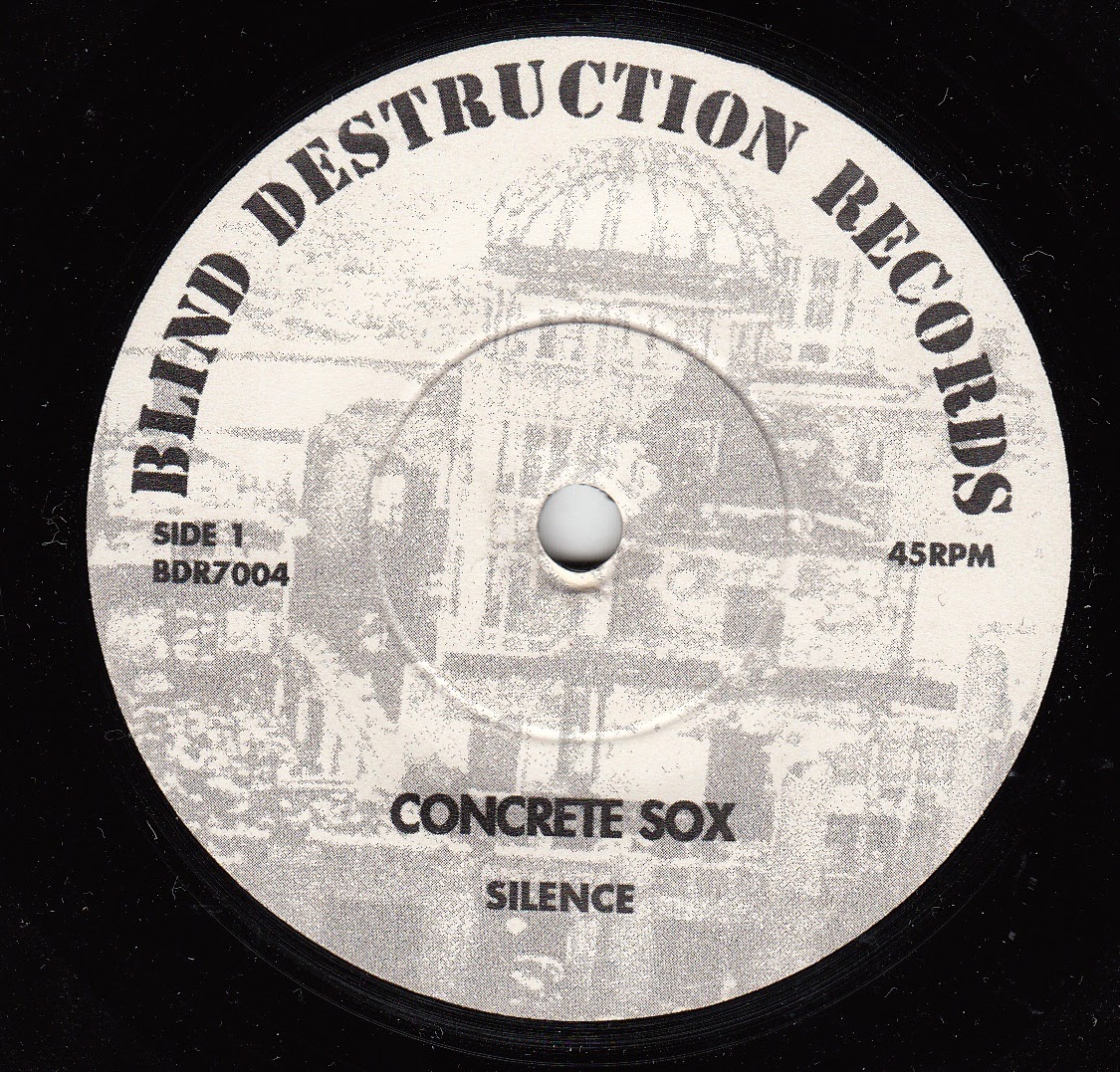 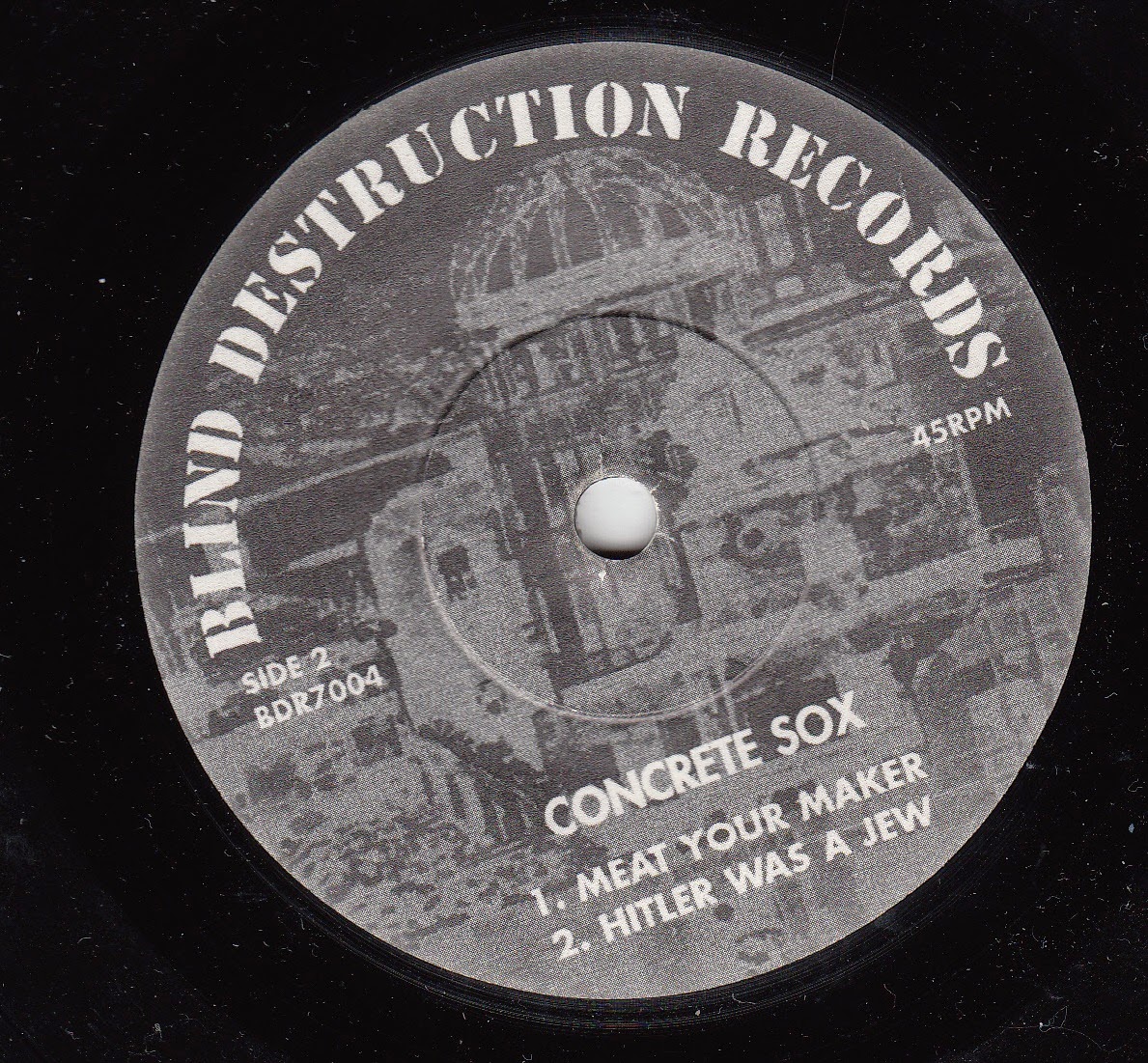 
Posted by The Earslaughterers at 17:03 No comments:

Acoustic Grinder / Turmoil "If you feel right you have to do it: suicide / Wanted" split Ep 1994

Great art is often tied to a specific time and place so that, in order to grasp its meaning, you first have to understand where it comes from. Indeed, there are records of which you can tell the year of recording or the place of birth in a heartbeat, or rather, in the context of this blog, in a drum-beat. Is the Acoustic Grinder/Turmoil split Ep great art? Fuck no and thanks fuck for that too. But nonetheless, from the very first chords, you can tell its sound reeks of the true political DIY crust/grind/whatever spirit of the early 90's then prevailing in Europe and on a rainy sunday, it is really all you need sometimes. For those of you who'd rather play American-influenced middle-class indie-rock, the emergency exit is on your left. And please never come back here. 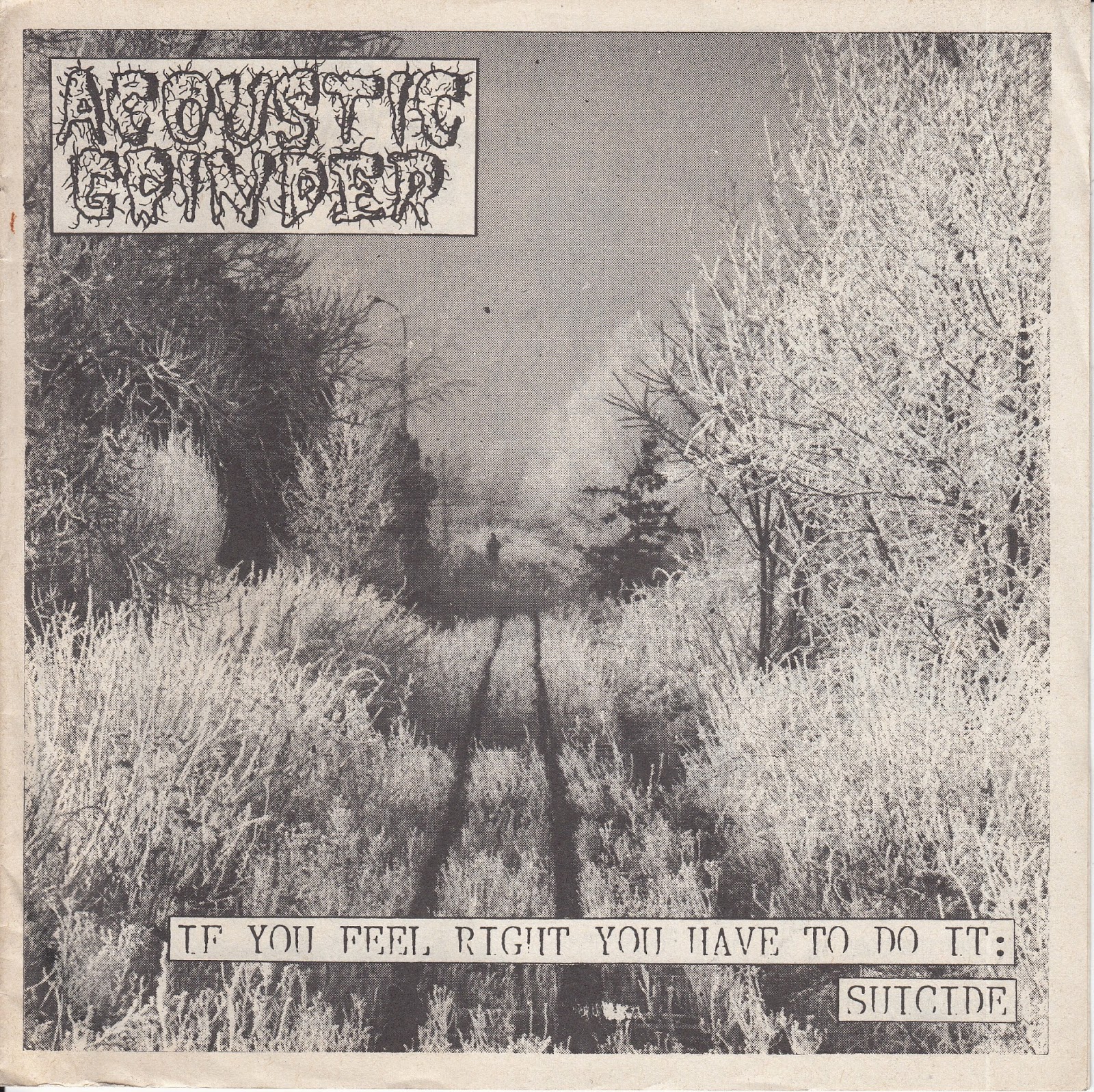 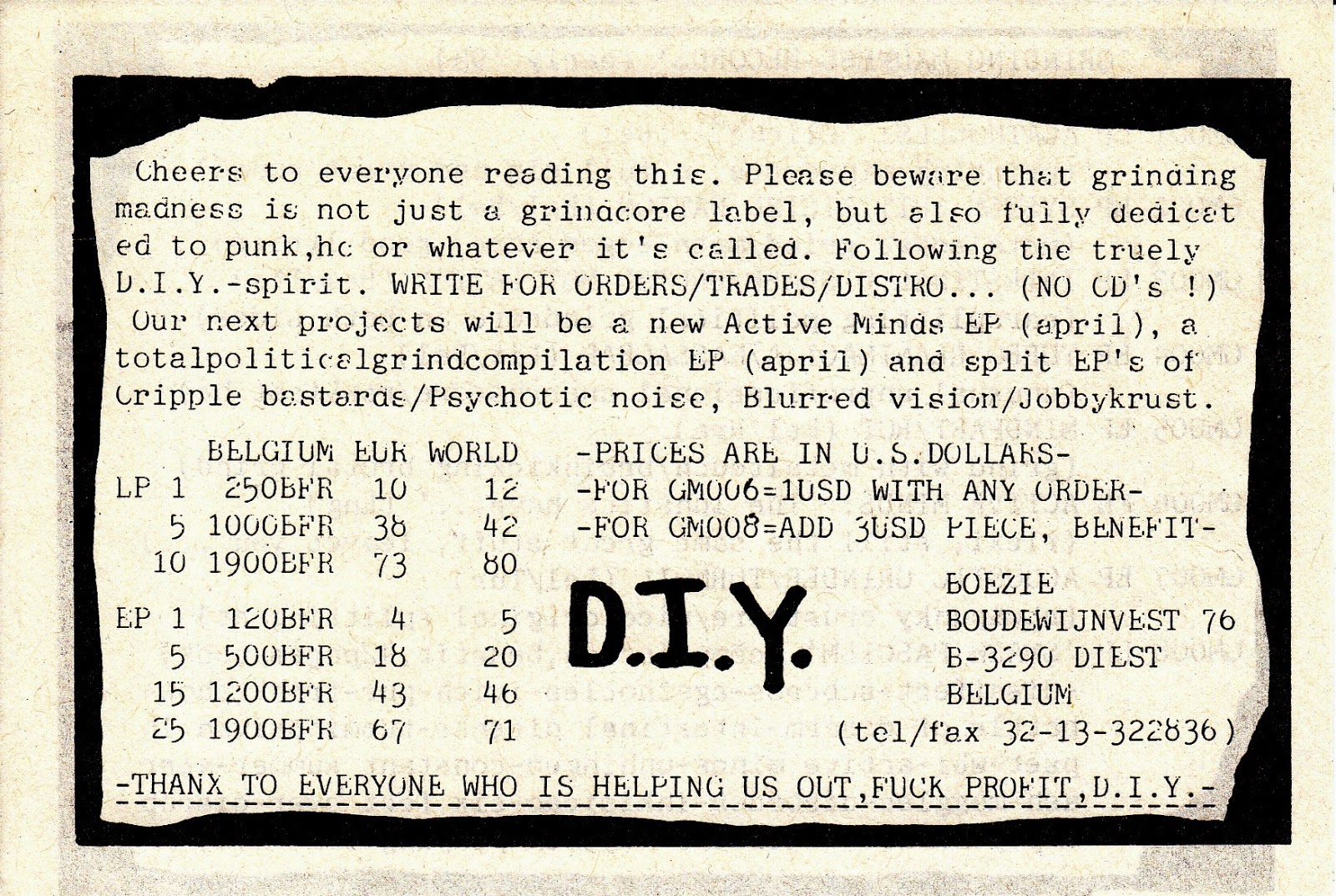 Beside having a bloody great name, Acoustic Grinder emerged from the amazing late 80's/early 90's Belgian crust/grind scene. I couldn't find their actual date of birth, but I'd say 1990. Now, when you hear "Belgium", "crust" and "grindcore", there are only two words that can possibly come to mind: Hiatus and Agathocles (and if they don't, you now know where the exit is). Acoustic Grinder very much started off as an Agathocles-type band and in fact they even did Agathocles covers in their early days. On this record however, they dropped the blast-beat and opted for a "Private Jesus Detector meets Hiatus during an Intestinal Disease show at the Vort'n' Vis festival" approach. They offer three songs of raw and powerful, gruffy crust punk, that may be unoriginal but are of their time and are very well done. The neanderthal nature of the production (also called "no production at all") makes the songs sound even more energetic and adds to their sense of urgency. This is fucking brilliant and just what you needed for your cousin's wedding next month. As was often the case, lyrics are short, political and to the point: one song against the violent right-wing Flemish block, one against the 500th anniversary of the "discovery" of the Americas and the Native American holocaust, and finally one about suicide (I think!). Cut'n'paste artwork aptly reflects the lyrical content, in case English is completely lost on you. Although the record was released in 1994, these three songs were recorded in late 1992. Acoustic Grinder also had a split Ep with Entrails Massacre from Germany, a full Ep, as well as a split live tape with Extinction of Mankind. The band has been back together for a few years now and released a split Ep in 2011 with... Agathocles! 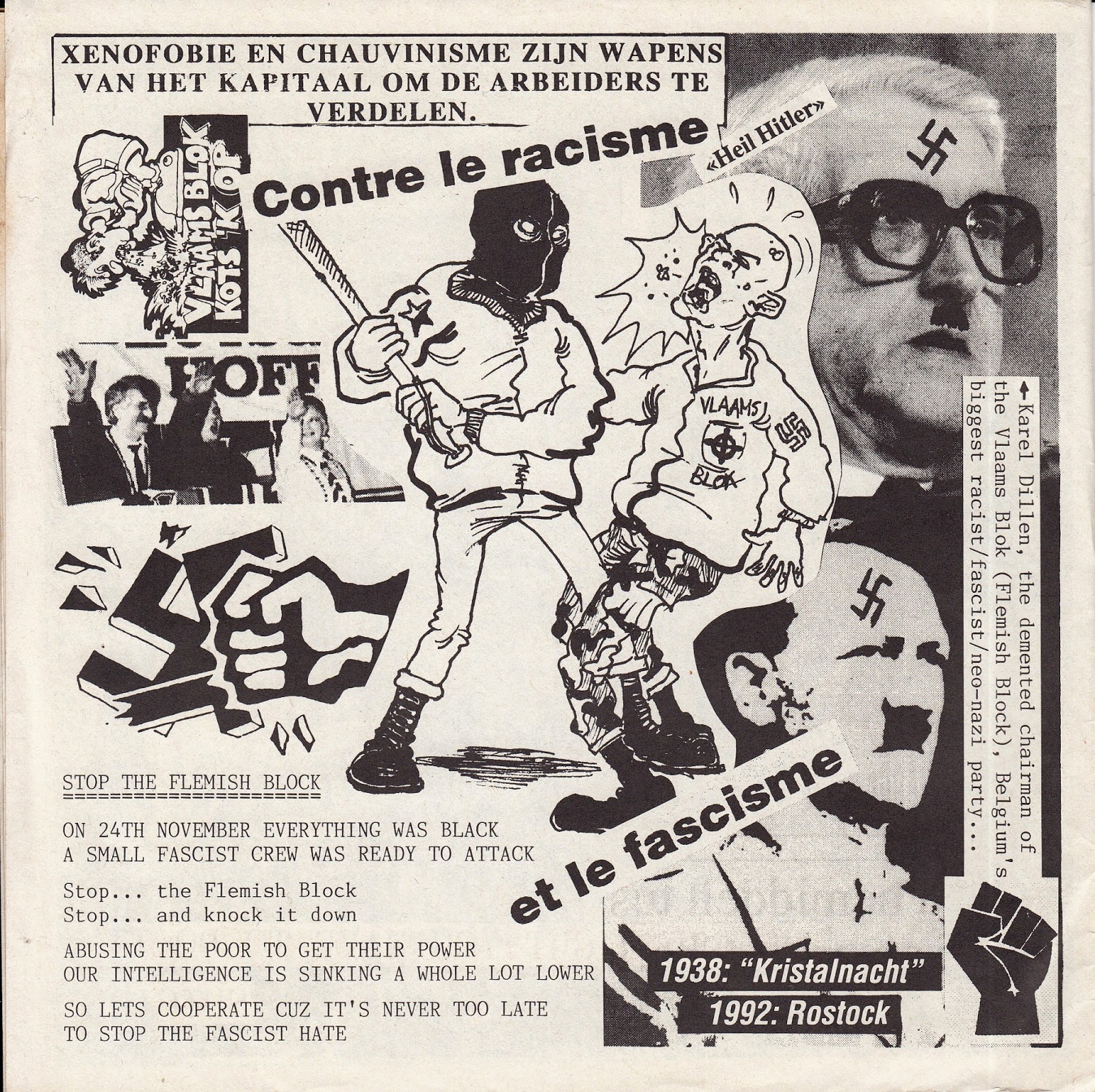 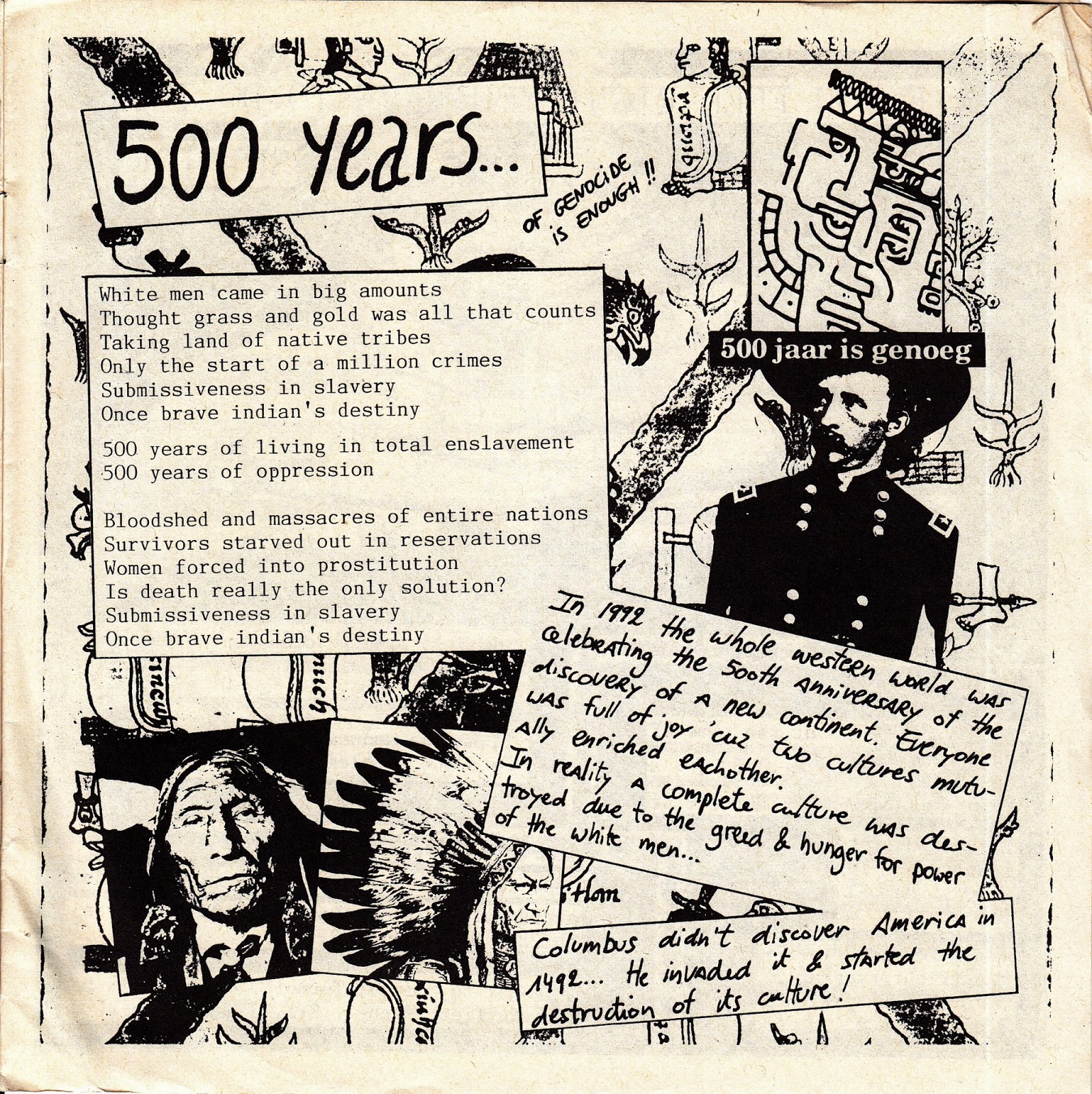 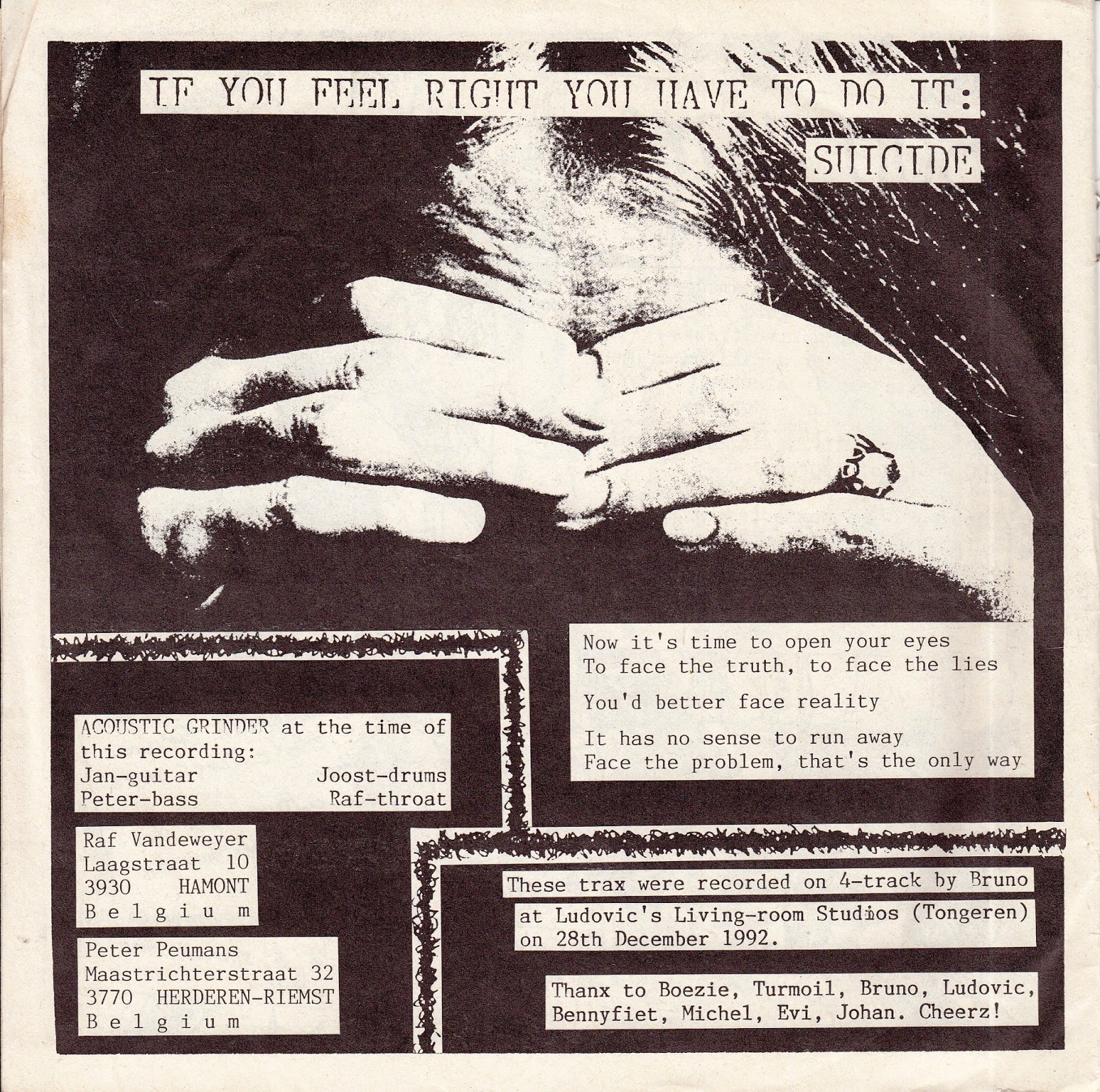 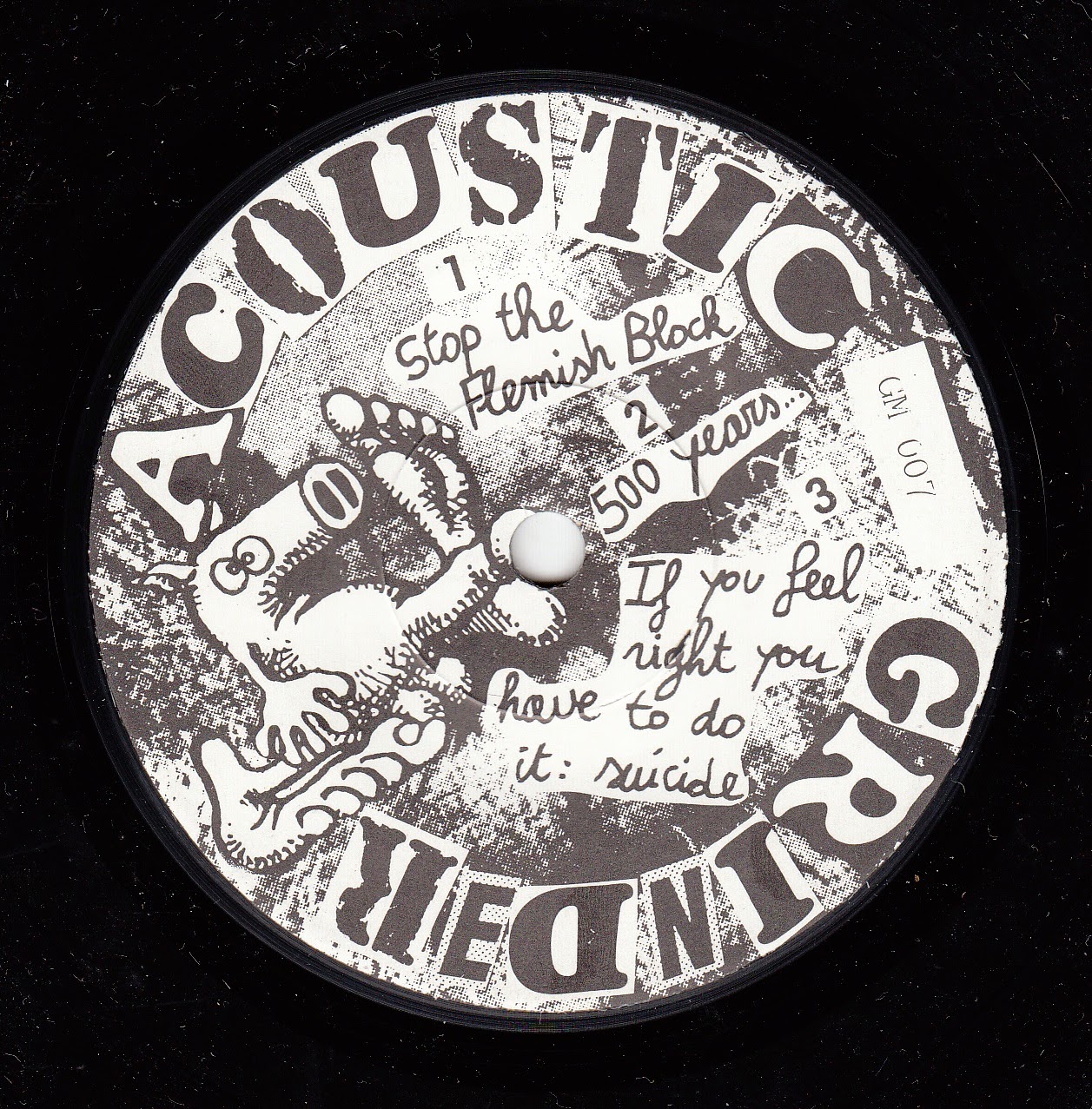 On the other side, you find Turmoil, an anarchopunk band from Istanbul, Turkey. I have to confess that I am not very familiar with the Turkish punk scene and when I listen to these tracks, I realize that's a crying shame. Apparently, Turmoil rose from the ashes of another band called Moribund Youth that was active in the early 90's and recorded two demos. While Moribund Youth lay on the US hardcore side of things, Turmoil was a more chaotic and noisy affair. There is certainly the influence of the fastest brand of worldwide hardcore in the music, but because it is a bit all over the place and especially because the vocals are very upfront and snotty, it reminds me of some British bands like Insurrection, early 90's Disorder, Dirge, or faster bands like Satananic Malfunctions, Atavistic or even Active Minds, although I doubt these were Turmoil's points of reference, with the possible exception of Active Minds, who were around by 1994 and, like Turmoil, used short songs with different paces and sharp breaks. If someone had told me that Turmoil were from Huddersfield and recorded a demo in april 1989, I might have believed it (after all they have a 10-second song like Sore Throat). Basically, fast and sloppy hardcore thrash with political lyrics and a DIY to the bones attitude. Songs about finding the real you and fighting back against religious alienation, against vivisection and animal abuse, against the military and the corrupt political system. 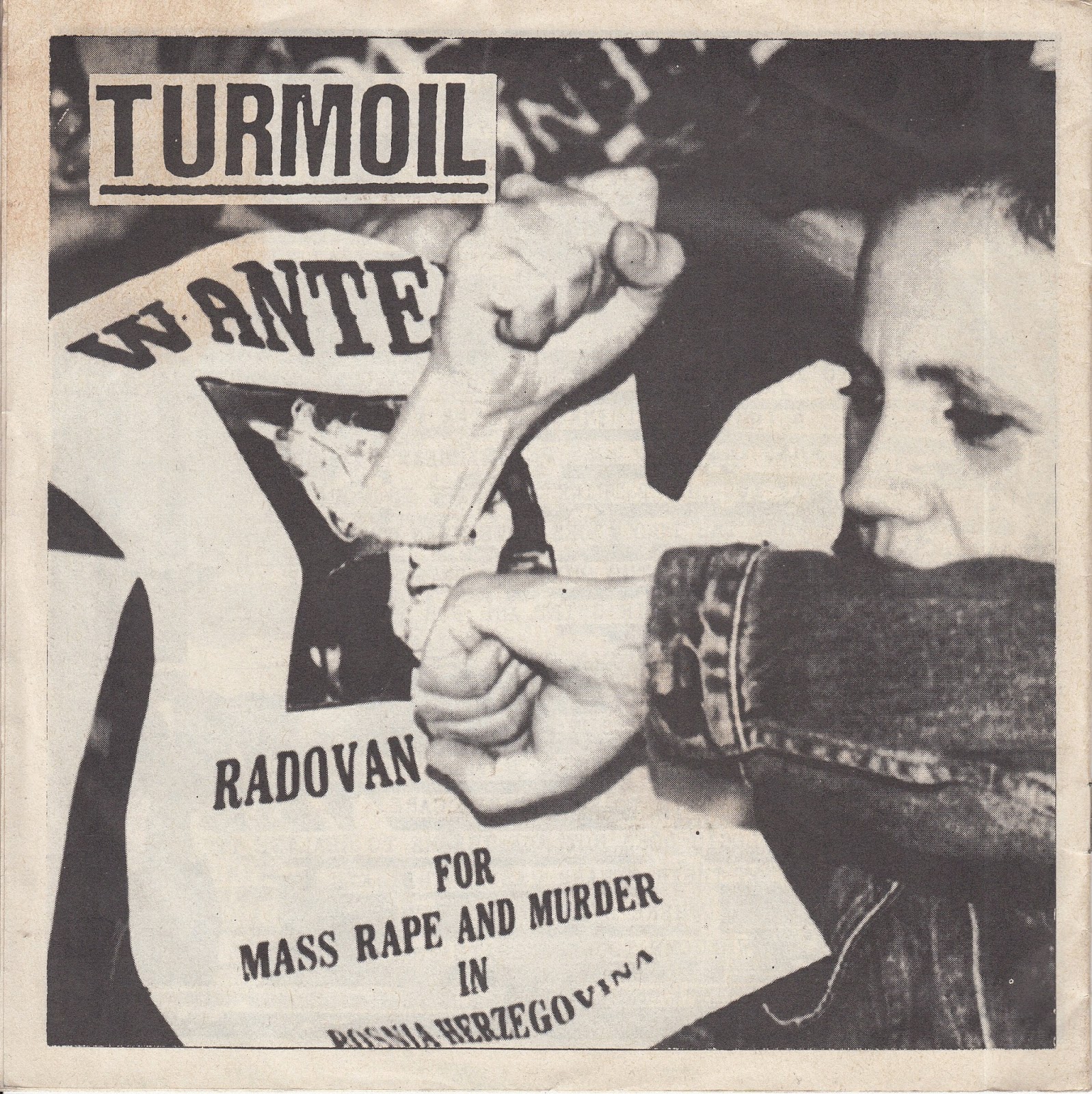 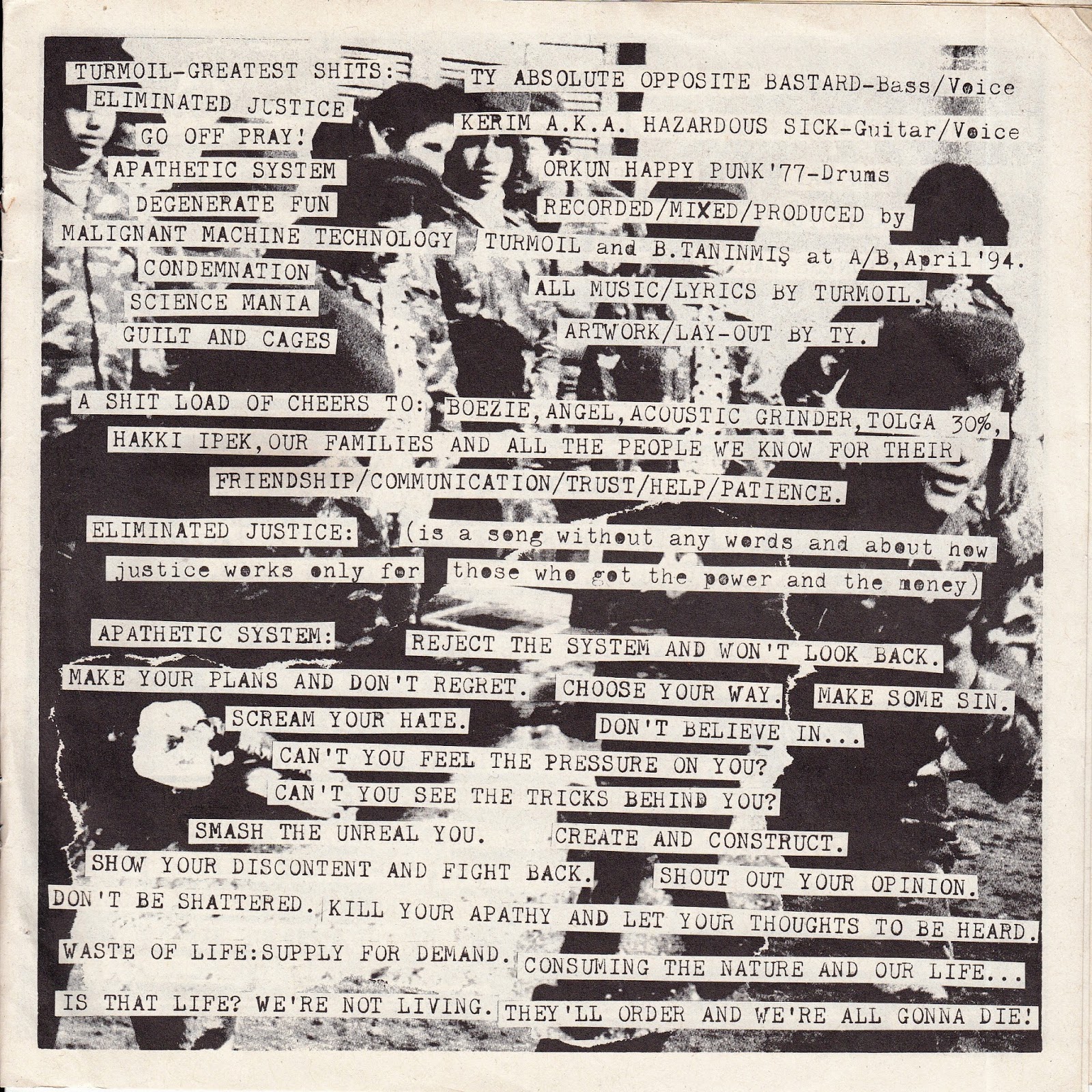 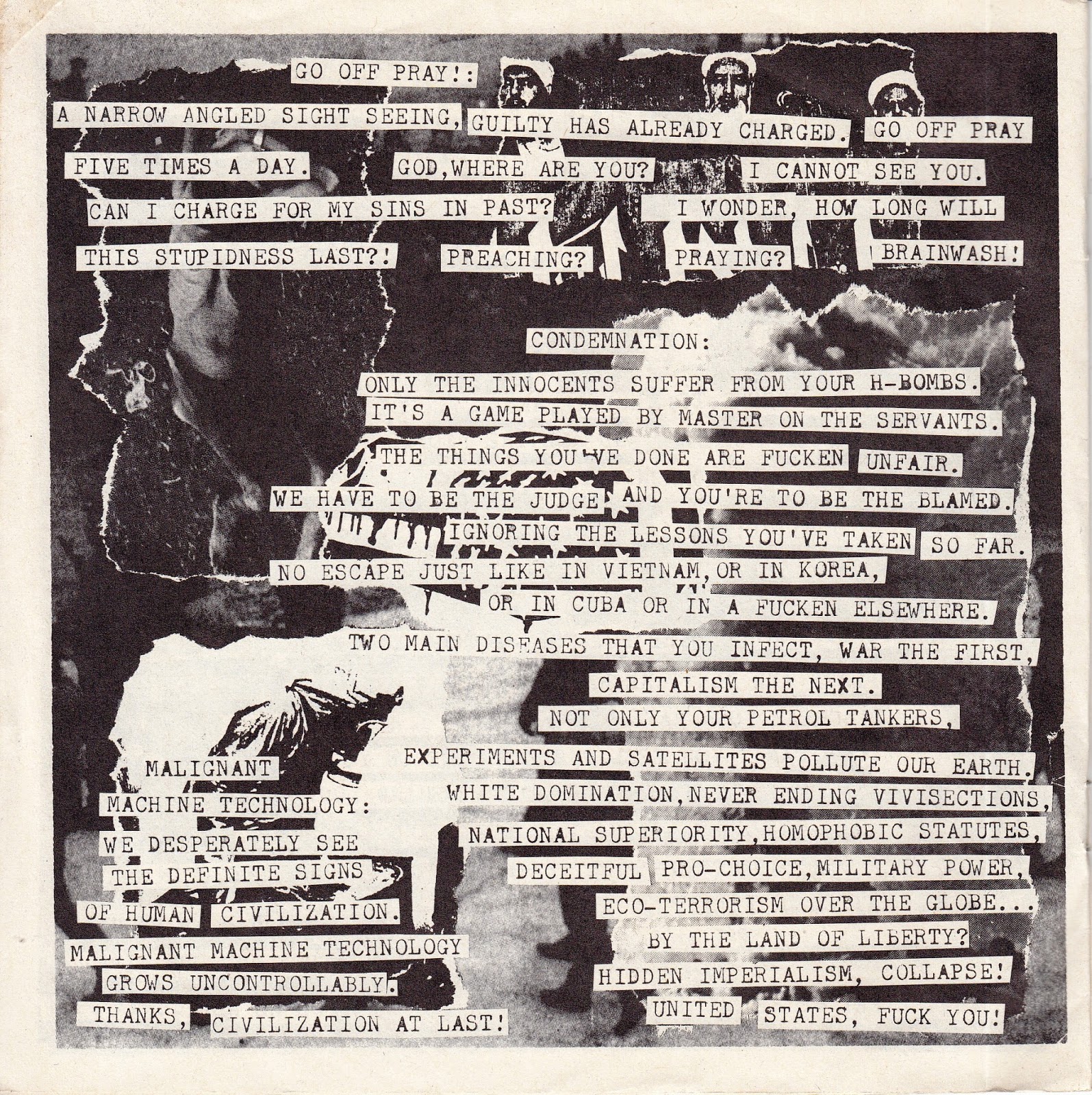 Turmoil seemed to be really into international cooperation since they also did split releases with Inkisição from Portugal, with the similarly shambolic Regeneracion from Mexico (I already talked about this lot in a previous post) and Depress from Malaysia. As I mentioned earlier, I don't know much about the 90's Turkish DIY punk scene but when you add Turmoil to the few other good bands I know of like Spinners, Dispute or Necrosis, it makes me thinks that there might be other hidden nuggets to be discovered. Suggestions anyone? 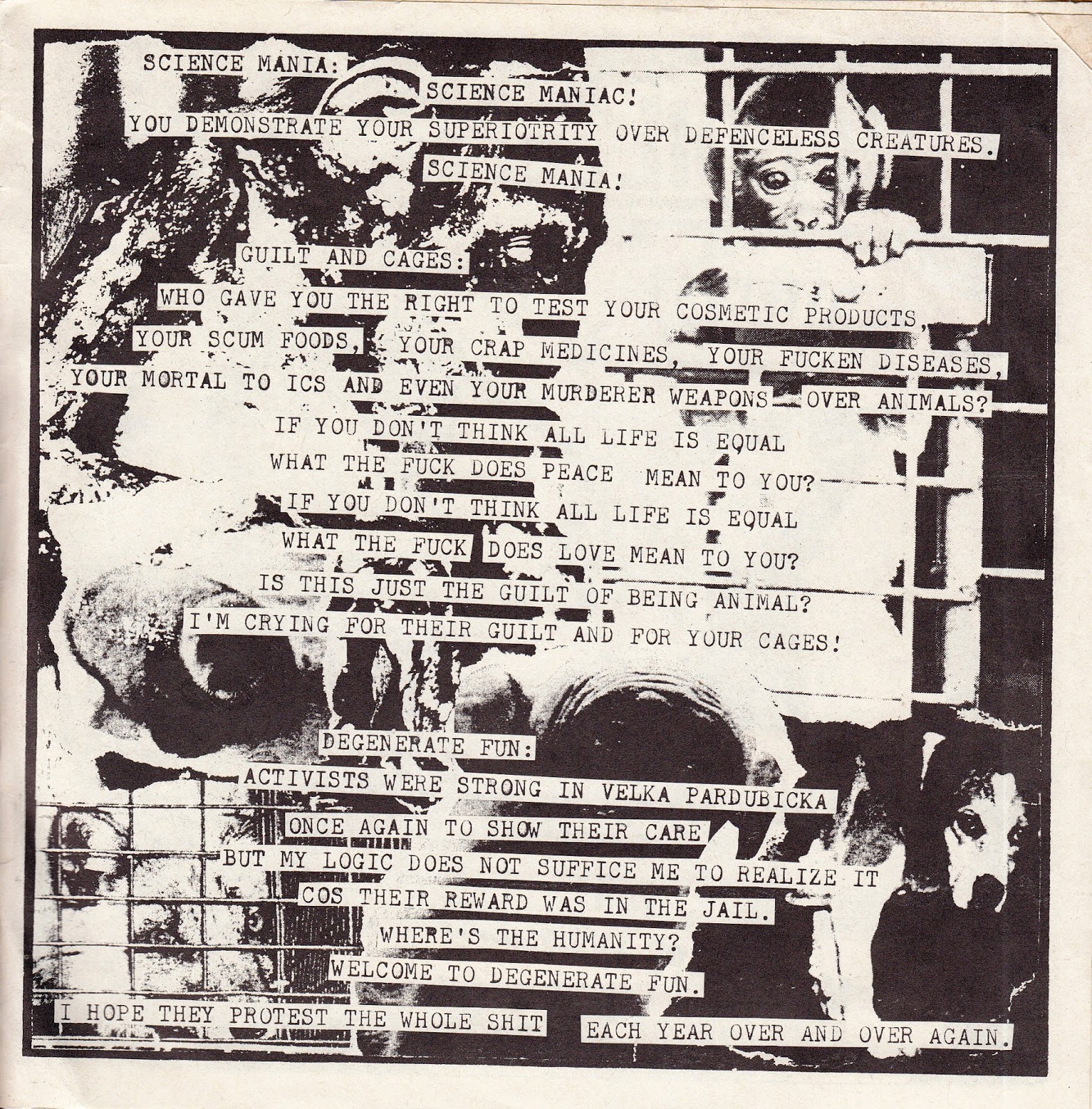 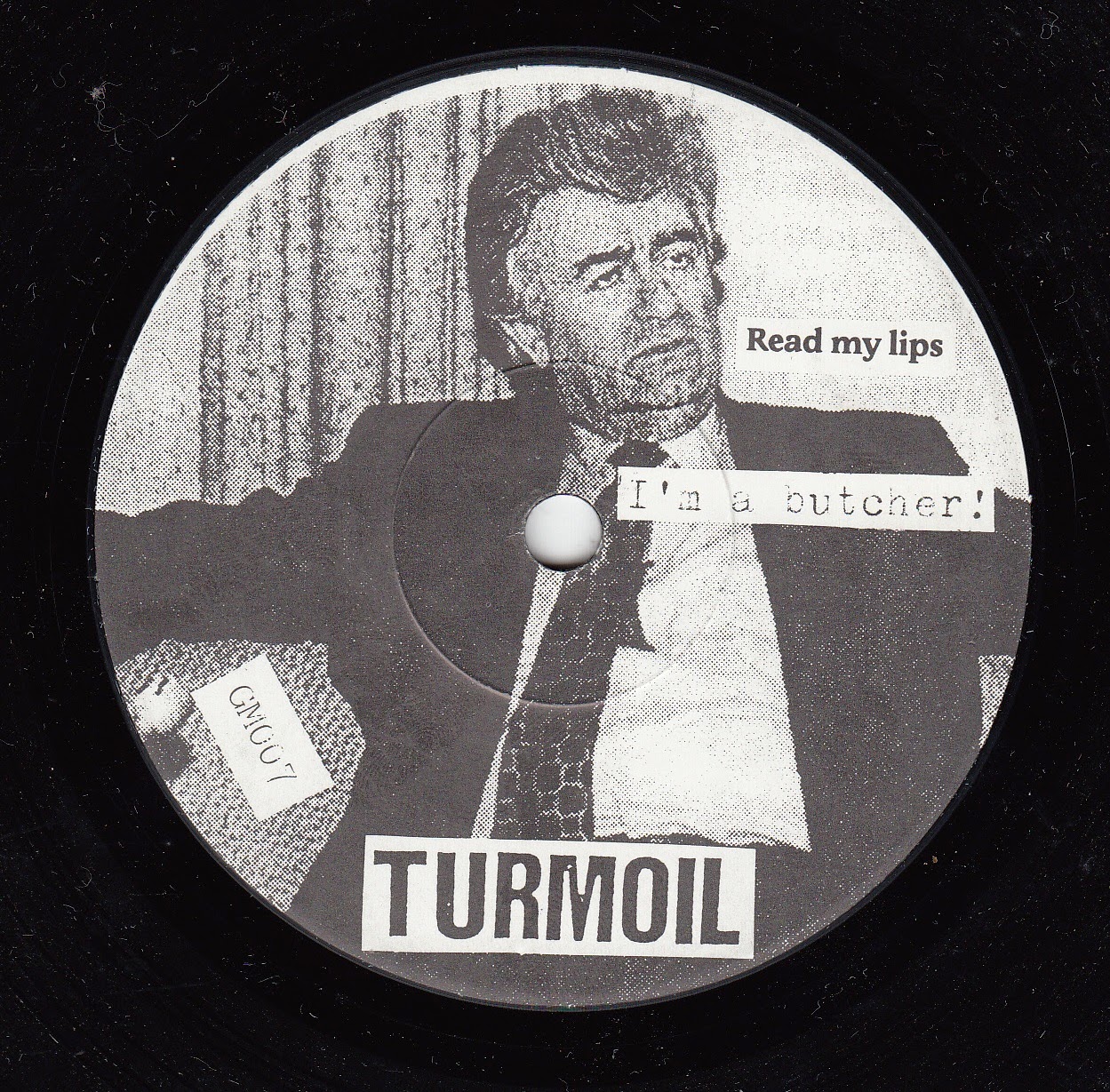 This Ep was released in 1994 on Grinding Madness records, a label that rather unsurprisingly was also responsible for records from Agathocles, Rot, Intestinal Disease or Active Minds. Reading the label's message in the record, I realized that Grinding Madness was meant to release a benefit compilation Lp called "Smash fascism" in 1995 with a cracking line-up: Disaffect, Disrupt, Subcaos, Agathocles, Disorder among others. Too bad it never saw the light of day. 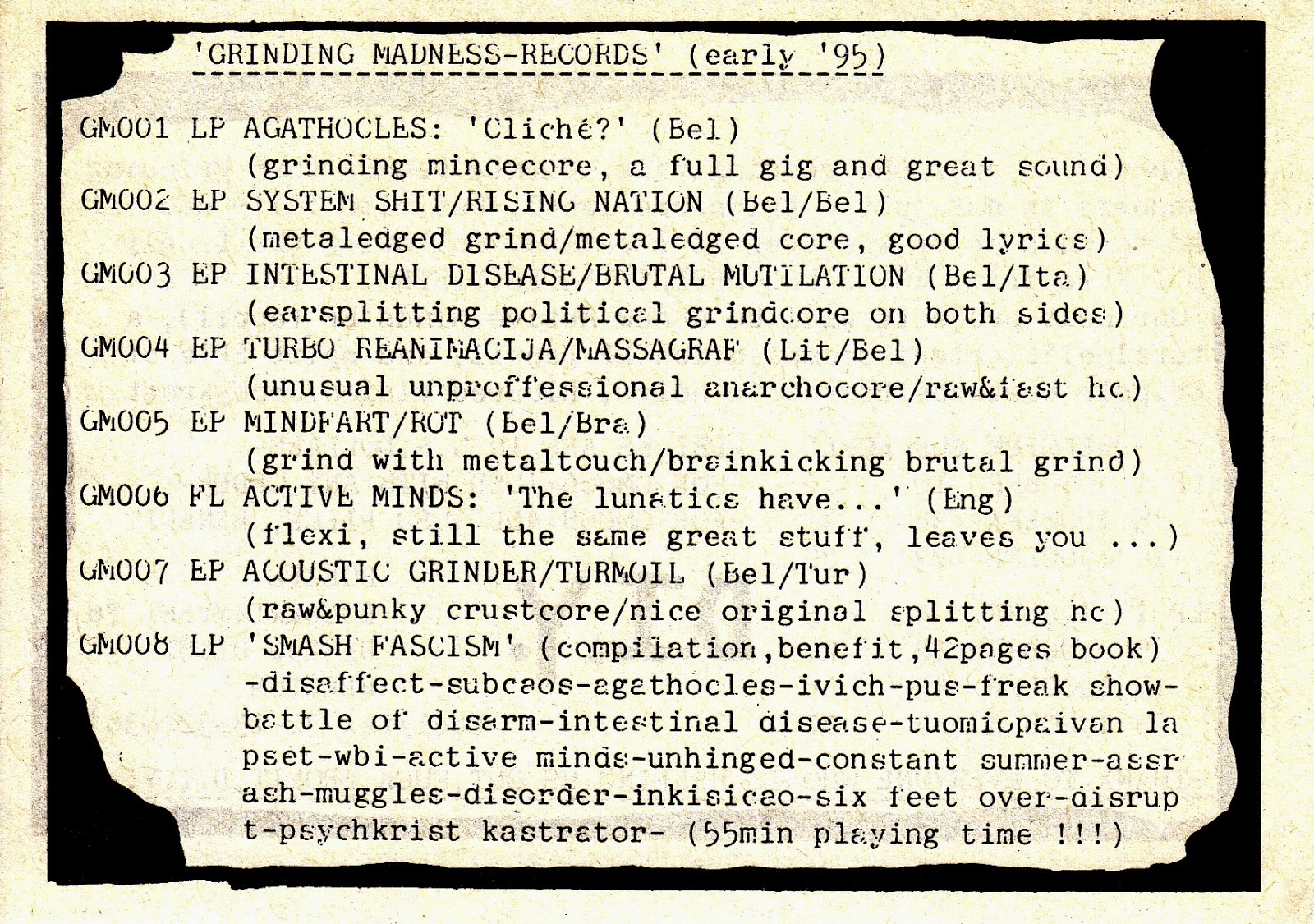 You should be able to get this record in any one euro bin at decent gigs.


Acoustic Turmoil
Posted by The Earslaughterers at 15:20 No comments: