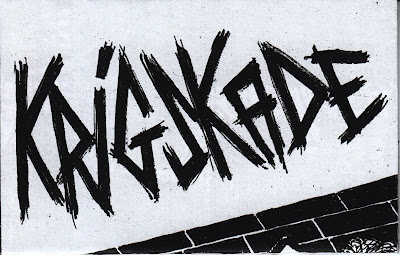 My point is that you should give Krigskade a shot as it is Paris' premier - and only - scandi-influenced hardcore punk band. "Krigskade" means "war damages" in Danish and actually all the lyrics are written in this language. But don't jump to the conclusion that Krigskade is to Danish what Isterismo is to Italian: a fucking disgrace. In fact, Krigskade's singer is fluent in Danish, his native language. Basically, this is the Scandinavian punk experience in Paris: a great, aggressive-sounding language AND plenty of dogs as well as filthy toilets at gigs.

In terms of music, the boys definitely know what they are doing. It has the raspy, rocking vibe of Totalitär, the fury of Krigshot and the raw quality of early Diskonto. You would be mistaken however to think Sweden is the only point of reference here as several breaks in the songs, tempo changes and chorus are strongly reminiscent of US hardcore (and indeed the lads are no stranger to this genre). The vocals are antagonistic and angry but, assuming you speak Danish, you can actually understand what the geezer is on about as they are shouted in a distinct fashion (as opposed to being growled). The bass is really up front and has a fitting distorted sound. The guitar sound has a slightly buzzing quality but remains relatively clear and is not distorted out of proportion, not unlike Italian bands like EU's Arse or even some Wretched records. The drumming is on a par with the rest, the breaks are performed with efficiency and a sense of purpose, and the D is lovingly beaten in tribute to Anti-Cimex. On the whole, you can tell the band had a clear idea of what they wanted to achieve in terms of sound and song-writing. 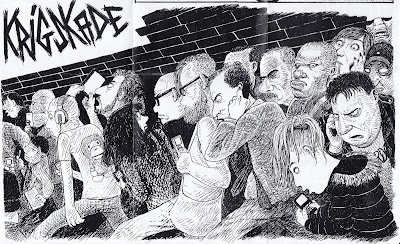 This tape was recorded last year but only came out a few weeks ago. As you can see, the artwork is stunning and aptly reflects the day's most alienating moment: the rush hour, when everyone goes from nowhere to nowhere (Anti-Nowhere League reference for ya!). The lyrics are of a political nature and are delivered with ferocity on stage. Though in Danish, English explanations are provided. "Blod pa Christianborg" points out the absurdity of Denmark's involvement in US imperialistic wars; "Heroin" is about smack; "Dansk folkecirkus" is about the rise of the far-right in Denmark and the image of respectability it seems to gain (but let's not be mistaken here, the shit still stinks!); "Kontortid" deals with alienation and anger; "Aldrig" is a song about Ungdomshuset and how it has become a meaningful symbol of resistance for us; "TV sekt" is a call for the turning off of the various shiny screens that make up our daily lives; "Dumt sporgsmal?!" is the necessary statement that meat is still murder (and yes that includes fish and people); "Cadekamp" is about time theft (also known in modern society as "work"); finally "Social krig" is a description of our brave new world, a dehumanized, controlled, plutocratic, ruthless world. 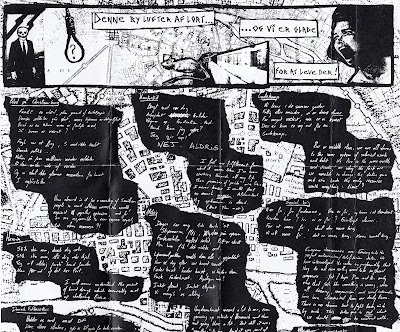 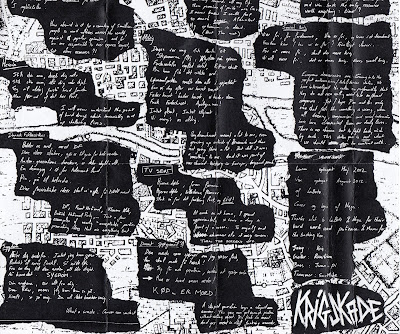 Like Peur Panique with whom they share a member (Fukushimike is incredibly the same dude as Suomike), Krigskade is a great live band and when on stage they do covers of Blitz' "I don't need you" (they actually had to take glue-sniffing lessons in order to do it properly) and that one creepy No Hope For the Kids song. 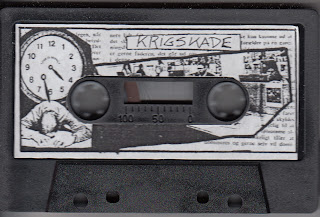 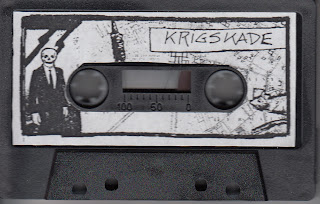 Posted by The Earslaughterers at 17:54 3 comments:

Last week, I ranted about the ambivalence and the relevance of doing tapes in this day and age. Today, I am going to post not one, but two demo tapes. Though it might seem a bit incoherent considering my tumultuous relationship with tapes, my present motivation is to be understood in terms of place. Meaning: the two bands are local and good mates of mine. Let's start with Peur Panique. 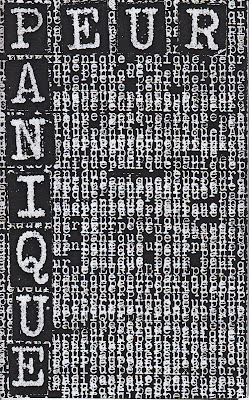 Peur Panique (they will be refered to as PP from now on for the sake of convenience) is a rather young hardcore band from Paris. 2011 saw the band forming, recording and releasing this demo tape. If you have been to a hardcore gig in Paris in the last 10 years, you are likely to have seen some of their ugly mugs at some point. If you have been to a hardcore gig in the last year, you are likely to have witnessed the aural assault that PP unleashes on stage. The band is made up of ex-members of SkitYouthArmy (a band that received the much-coveted "Sloppiest And Yet Best Hardcore Band Of The Parisian Southern Suburbs Award" twice in a row, in 2005 and 2006), Grippe Aviaire Terror (noisy bollocks for the sake of it), Youssouf Today, current members of Youth Avoiders (Paris' most glamourous hardcore band), Krigskade (Paris' nerdiest hardcore band) as well as the local pride of punk publishing, responsible for such respected and established reads as Pollution Capitale (an exhaustive newsletter about the Parisian DIY punk scene) and Underwood. Quite frankly, PP is to local hardcore what the Dream Team was to basketball in 1992.

Now that I got your attention, let's talk a bit about the music. If you ever want to see PP play live, you'd better be on time, because the lads only play for 12 minutes (and that's only because they usually play their set twice). As you have probably noticed, I am hardly the expert in US hardcore-influenced music and the term powerviolence makes me think of a wrestling move. Still, it is accurate to say that most of the genre's conventions are respected in PP's music: short and really fast songs, manic, frantic tempo changes and high-pitched, screamt vocals. There are a couple of very effective old-school hardcore breakdowns as well which shows that the lads haven't forgotten their classics and have an ear for catchy riffs, a crucial element if you want to offer the listener with something more than a wall of speed. In fact, you could argue that the energy and the agression of the genre is emphasized by and even depends on the addition of slower, memorable parts. 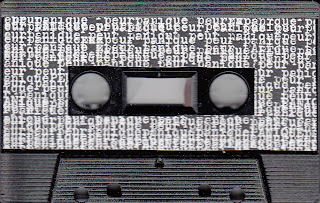 You will find eight songs in six minutes on this tape. The recording is suitably raw and the band is tight. The absence of gaps between the songs adds to the intensity of the music and is quite close to the live experience. The lyrics are all in French and deserve some notice. "Terreurs nocturnes", "Migraine chronique", "Violence totale" and "Echec et mort" reflect an obsession with the inner violence, the pain inside (Peni quote) leading to physical pain that daily life give birth to. "Dictateurs morts" is about the lust for blood in the Western mass media following the death of blood-thirsty dictators. "Populace" is about social control and how the individual is taught to obey and crawl in order to survive in this ruthless world. "Veine cave" is arguably an accurately schyzophrenic description of a squat gig in Paris. Finally, "Relation prison" is possibly the darkest song of all as it tackles the superficiality, if not the artificiality of relationships. We have all had colleagues who absolutely want to know what you think about something (the worse is probably when they ask what you are into). For all I know, this song could also be about relationships inside the punk scene. Does a common love for Anti-Cimex, Infest, Amebix or whatever necessarily makes us close?

While you meditate on this question, I suggest you play PP's demo really loud. It might help. You can contact PP through the email that is included in the tape or through the Official Unholy Grave French Fanclub which PP's singer founded years ago (by the way, donations are welcome). 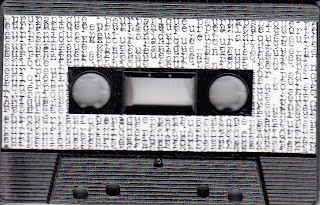 Echec et mort
Posted by The Earslaughterers at 15:53 No comments: