Lately, we have been talking a lot - it is a royal "we" obviously - about names and how they can convey an idea of what a punk band is about in terms of sound and influences. Sometimes a rather unusual moniker can work great for a given genre or on the contrary prove to be a very unfortunate choice, the quality of the band notwithstanding (see the Genital Deformities case). But generally, especially since the unstoppable and ungovernable rise of the internet, names are pretty straight-forward and transparent, unequivocal, although exceptions like Disface do force even the learned listeners to be careful, alert and humble. Otherwise you will end up with a (rather good) melodic punk-rock band instead of an unremarkable d-beat band. So even though the old saying "don't judge a book by its cover" remains true, if you bump into a band called Stenchkrusher exhibiting axes, disgruntled orcs and gutter crusties, the chance that they play indie-rock is virtually nil, unless it is your mate Gary trolling you again with his imaginary bands. Get a life Gary. The name Repression Attack does not really conjure up images of hyperbolic Russian stenchcore and yet that's exactly what they were in the 2010's. It has to be said that the band started as early as 2007 back when they were a punkier-sounding outfit, influenced mostly by Anti-Cimex, Extreme Noise Terror and Disclose (as revealed in a recent interview for the excellent and highly recommended Disastro Sonoro blog) and when the whole Russian d-beat/crust wave was still very much embryonic. And indeed, upon listening to their first proper recording in late 2009, a split tape with pan Zlobek, RA - based in Ryazan, South of Moscow - were still metal-free and a solid and savage example of ENT-styled dual-vocal crustcore. I had not played the songs for a while and I was pleasantly surprised at how good they are. So I suppose the name "Repression Attack" is not out of place if you originally settle for that kind of political crust punk vibe and I suppose it felt a little pointless to change name after they embarked on the 2010 stenchcore revival cruise. The one thing that definitely looks incongruous on that initial tape is the "Good night white pride" cover from Loikaemie, a rather tragic German oi band, even though I wholeheartedly agree with the sentiment. But then, I presume that the idea to cover that particular number had a lot to do with the strong presence of local far-right hooligans and skinheads in those years more than the actual music. And on that level the name Repression Attack also feels like a political comment in itself in relation with the repressive politics of the Russian government. Sometimes you do not chose the name, the name choses you. 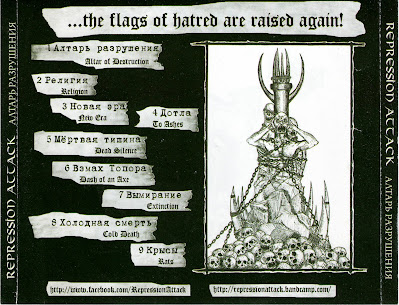 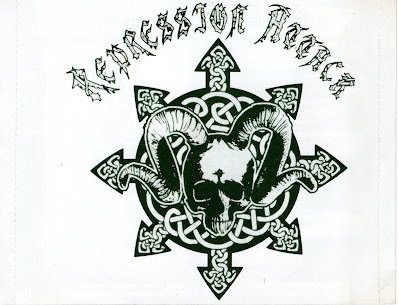 I have already written about my love story with Russian crust several times, notably very recently through my post about Kärzer, so I am not going to bother you one more time with how much I love Fatum or how I first came across Distress in 2006 when a roommate brought back their demo tape after a trip to Russia. My brain resembling more and more a giant crust gridlock - my doctor actually described it as the most severe instance of the Rush Hour of the Crust Syndrome she had ever come across but I am still struggling to know if it was a compliment - I do not remember how I became familiar with RA but I suspect it was through a blog back when the whole punk blog thing was at its peak and before people got addicted to selfies and their own image and I am quite sure it was with the early split tape because I do remember identifying RA as a stenchcore unit only afterwards. While the early incarnation of the band had dual male vocals, the Алтарь Разрушения cd have prominent female lead vocals, which I have to say surprised me even more, in a good way as I have always been a sucker for female-fronted crust music. That RA's music changed a lot between both recordings is an understatement, not just in terms of style and where they moved to on the crust spectrum but also in terms of musicianship. In 2009 they were enjoyably raw and in-your-face but in 2013 they were truly a tight unit and, had they changed their name, I don't think I would have been able to recognize them. 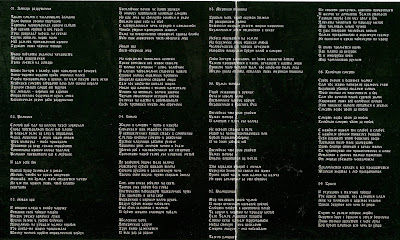 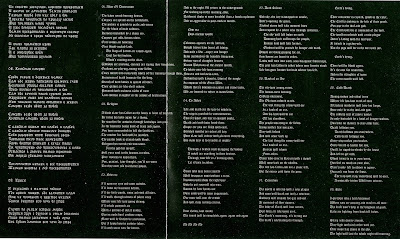 Алтарь Разрушения came out in 2013 at a time when Russian crust was becoming a real thing and it is a work that clearly matters from that national perspective but even on an international level this album clearly held it own at that point in time and can be said to be a highlight of the early 2010's. The sound is pretty raw and unostentatious, a bit thin and sloppy sometimes (it was recorded live in late 2012), but still very powerful and it aptly conveys that sense of dirty anger pervading the band's music and a crust-as-fuck soundscape. It would be far-fetched to claim that RA is an openly referential band although they can't pretend to be reinventing crust pants on that one. The attentive listener will be able to spot a couple of literal Deviated Instinct riffs on some songs but they are not really used as nerdy nods, they just fit very well and serve the purpose of the songwriting. RA know and love the formula, you have heavy and filthy, stenchy metallic mid-paced moments as well as fast relentless thrashing d-beat with mean, hoarse and raspy female vocals supported by a second male vocalist dealing with the lower Antisect-grinder pitch. The interplay between the two guitars works very well and allows for the cracking hooks and the dirty bends that can take a modern stenchcore act from good to great. The variety of beats is important, at times too much so as a single song can have four distinct tempo changes and accompanying riffs which can be a little distracting narratively and overwhelming given the length of the album. But that's a minor criticism. The band gets extra points for their eerie synth driven introduction on "Холодная Смерть" and transition on "Мёртвая Тишина" (with the exact same tune as Effigy's "From Hell"). Brilliant old-school call. 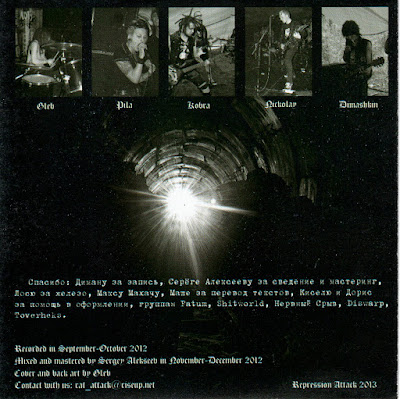 RA can be relevantly be seen as a second-generation stenchcore revivalist band and should be mentioned in the same breath as Cancer Spreading, Last Legion Alive and Fatum as they share common influences (the UK greats and the 00's stenchcore revival), aesthetics and intents and let's throw some AGE and Ναυτία in there too. Pila's vocals do set the band apart on Алтарь Разрушения, very aggressive and spiteful not unlike Agnes from Homomilitia/Lost and I like that she firmly keeps RA on punk grounds. The cd was actually self-released, which is pretty preposterous considering its quality, and goes on to show that sometimes class bands are unfairly ignored. In early 2014 the band recorded a proper Ep with a better sound (and a love for Deviated Instinct riffs again) that would only be released in 2016 thanks to a collaboration between seven labels among which Neanderthal Stench, Insane Society and Totalpunk. Return to Instincts was made up of two long old-school crust anthems and was an improvement, it saw the band further work on the narrative dimension of crust thanks to longer songs that allowed for a real story to develop and an atmosphere to settle. It's an excellent Ep. Tragically, one member, Dimashkin, passed away that year and it must have been a massive blow to RA and I did not hear anything from the band until earlier this year. 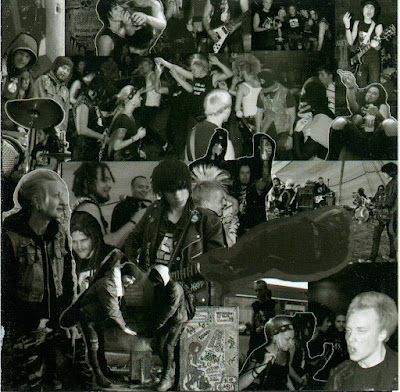 I was delighted to see that the band was still going but since they never were too keen to show off on the internet or social media, I guess I just did not do my homeworks - since youtube reveals that RA did play live in recent years - and thought they had split up. The 2022 version of RA is different as only the drummer Gleb and guitar player Kobra are still in the band and I must say, and I am not exaggerating for once, that never did RA sound as good as on their new album An Endless Landscape of Ugly Shapes. The band now claim to play "psychedelicrust" (it reminds me of Akrasia and their "cataclysmic space crust") and, while they are still rooted in the stenchcore world, this time with a greater emphasis on the apocalyptic groove of the Axegrinder branch of the family tree, they have infused their crust with psychedelic influences, danceable tribal beats and progressive elements. On paper, the idea of having a saxophone on a crust album is akin to blasphemy to me and would have you decapitated but it is, I have to admit, really good. Brilliant, excellent even. RA use these new sonorities and vibes to tell a different crust story that still makes sense. It is still definitely an old-school crust work but undeniably very original and unique, which is not something one is able to say often when it comes to crust. I am reminded of 90's bands like Bad Influence, Iowaska and Πανικός. It is like Swordwielder on shrooms or something. Cracking stuff. For the moment, a physical release is not planned but I really hope it will materialize at some point because An Endless Landscape of Ugly Shapes is bound to become a genuine crust classic and already one of the best of the 2020's. 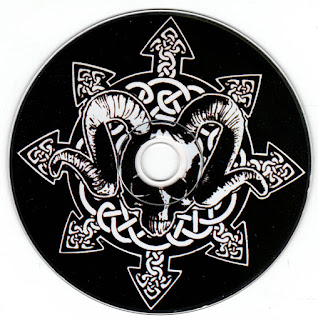 There is an interesting interview of the band on the Disastro Sonoro blog (here) where they talk about Russian crust, crust songwriting and the current situation in Russia with the war and Putin's iron fist. A good, albeit depressing, read. This is precisely the moment when Russian punk bands, especially those who have something to say and work in genuine DIY fashion, need support. Grind the enemy.

Posted by The Earslaughterers at 10:11