That is another one I completely forgot about although seeing it again, lost in the Dis section, instantly brought a childish smile to my face.

I was aware I had one or two Demisor records so was not too surprised with their presence on one side of the split Ep, but I have to say I didn't really remember how they sounded like here. When I looked at the Discontrol side, on the other hand, the name itself did not really ring any bell (they could just as well have been called Hellcontrol, Diswarning or any other clumsy assemblages of teenage Discharge worship), but accurate memories of their sound quickly came back to my rusting brain, thanks to the rather glorious title they picked for their side, Neanderthal Crust - the Primitive Way, one that I remember finding particularly enjoyable and humorous and still actually do.

Crust is often said to be a pretty grim and dark punk subgenre, and for good reasons, since, after all, most of the songs deal with war, decay, the end of the world and a large array of gruesome injustices and depressing facts of life, so that, although you can always find numbers about obnoxious boozing and teh subsequent partying, even they will often be seen as palliative or self-destructive ("Relief" being the prime example). But still, the fun-loving element in crust cannot be denied and I think Discontrol are genuinely funny. Of course, if you are not into crust or d-beat to begin with, you will think that they suck on many levels and that there is nothing even remotely amusing to their music and their philosophy. Humour is highly cultural and relies on a web of collective references. Getting the proper cultural references involved will make a joke funny, or at least intelligible, while not getting the references means that one is not even aware that the joke refers to a particular cultural datum and, therefore, not only does the joke inevitably fall flat but it becomes deprived of its joke status by the non-initiated. Nothing is funny out of context. It's like trying to laugh with Thisclose when you have never heard Discharge. It just cannot work.

I am not completely sure of the story of this split Ep and how it landed in my collection. I have a mate who often gives me obscure and improbably rough and mean crusty grindcore records he has spare copies of (you know, that kind of friend) so that I often end up with bands I know little about. The records are usually from the late 90's and early 00's, the bands have terrible names and the covers are atrociously pixelated because at that time, and for a good few years, people apparently thought that pixels did not really matter or that no one would notice or pay attention or that even the most primitive digital imaging would age better than old-fashioned drawings or cut'n'paste. Of course, history proved that it was a very wrong and flawed way of thinking (like skacore for example), but I personally think that such overpixelated covers are unintentionally funny and almost touching (and from an archeologist perspective it makes the dating of a punk artifact easier to gauge). The Discontrol/Demisor split Ep is such a late 90's record: it looks ugly but sounds lovable. Let's start with my favourite and smile-inducing side: Discontrol from Sweden. 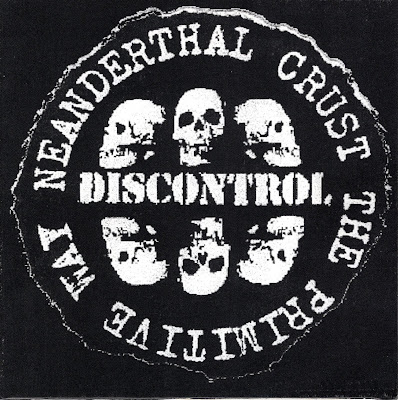 
Discontrol is the humourous band of the record. Now, trying to be funny with punk can be a very tricky endeavour, arguably now more than ever. I generally do not like "joke bands" and never got bands like that use intentionally crude, offensive humour just for the sake of "pissing people off". I suppose it is fine if you're 16 and it is your first band but quickly becomes embarrassing when you're a balding wanker in your forties. From my perspective punk and a sense of humour can match when it is done out of passion, a snotty sense of irony and as a tribute and I feel Discontrol do it well. Of course, your tummy will not be aching with laughter but if it does not get a few giggle from you then you are possibly on the wrong blog.

The band could have been nominated in the "Most Unoriginal Dis Moniker of the Year" category with a name such as Discontrol but then it was the 90's after all (there were dozens of Disbands in Sweden) and I suppose that it fits them well in the end. They were from Ockelbo, a small town north of Uppsala, and unsurprisingly played unabashed raw, fast and loud Swedish mangel that nods heavily towards the local greats from the 80's. The band was active between 1994 and 1999, a time when D-beat and dischargey hardcore was very strong and prevailed in Scandinavia, and this split was their only vinyl appearance as well as their last recording. A Discontrol tape entitled 1998-1995 and released on ALP Tapes (a small tape label responsible for the great Attack! scandicore mixtapes and a Mob 47 tribute) tells clever me that they also had some practice or demo recordings hanging about). There are not many pieces of information floating around about the band but apparently the drummer went on to play in Usurpress and Panikattack. But let's talk about the music. Discontrol were - very - heavily into Shitlickers. Not only did they cover "Leader of the fucking arseholes" on the split but they also did their best to mimic the Shitlickers' nihilistic, and aggressive lyrics, a drive which led to such amazing poetic creations as "Weak escape" ("Sick off shit so you fuck off / What a weak escape") and "Fucking arse" ("Your state of mind is fucked / Arsehole fucking arse"). As I said earlier, if you don't know Shitlickers, you will find the lyrics and the music silly and exaggeratedly negative, if not cryptically dumb. If you do, I guess you will get it and enjoy the playfulness. 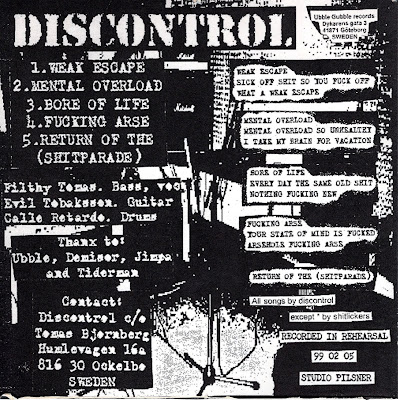 Twenty years after this recording, there are far more bands doing the Shitlickers worship than there used to be. The internet made turned the band into a punk reference while I think it is safe to say they were mostly an obscure classic for hardcore diehards before. When a current band goes for that sound, it will usually rely on pedals, effects and as much pose as possible in order to re-create. Discontrol's music however was simple, direct, mean, tuneless, raw, deprived of any sonic sophistication (or originality), and somehow managed to capture the threatening simplicity and basic, vile, relentless aggression of the Shitlickers sound. I'm not saying the textures are exactly the same but the vibe is here, the simple but mean scando riffs are played like there's no tomorrow and you can tell that it was recorded fast and loud. The vocals are particularly hoarse and gruff and utterly deserve the "Neanderthal crust" tag that aptly conjures up images of primitive, rough, heavy hardcore played by soap-dodging punks, nightmarish visions that should be enough to send hardcore posers home. In spite of the title, there is technically not much crust in Discontrol - though I can imagine them loving the impact of Doom and finding Sore Throat structurally inspirational - as they were into the dirtiest and most direct form of aggressive Swedish hardcore like the aforementioned Shitlickers, Crudity, Svart Parad, Bombanfall or Anti-Bofors. 6 songs in 5 minutes. This is the most primitive, barest hardcore punk music you'll be hearing this month, I can tell you that. 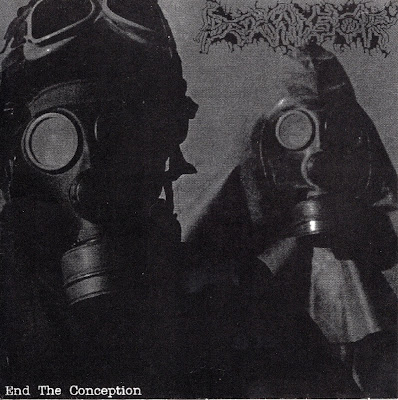 On the other side are Demisor, a rather cult grindcore band from Singapore that has been going since 1987 and is still very much active to this day. I cannot pretend to be an expert in grindcore and I am not that familiar with Demisor. Fortunately, they don't fall in the modern technical grind category (a subgenre that always blasts me to sleep) or the metal grind one (who needs lengthy grindcore numbers???) and, in fact, they sound delightfully crusty on this record. The tempos are diverse and even if the songs mostly revolve around the time-approved and honourable "blast beats followed by a fast pummeling d-beat" binary structure, there are some crunchy mid-paced moments and even one gloomy melodic intro to show you that Demisor are not into monotonous grindcore. One things that works particularly well here is the polyphonic element. There is of course a prevailing growling voice but it is adequately balanced with screaming vocals and even some shouted female ones on "End the conception". The production is pretty raw but then overproduced grinding punk is not something I usually look forward to and the whole sounds very energetic and angry. I would describe the songs as lying somewhere between Disrupt and Unholy Grave which is an excellent thing. Quality crusty grindcore for sure. 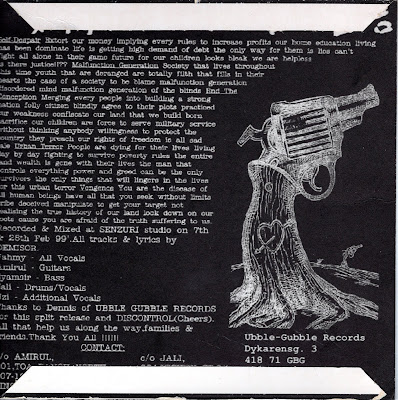 
This split Ep was released on the short-lived Swedish label Ubble-Gubble and, in true DIY fashion, there was an unfortunate mishap as the covers were glued together so that you couldn't see what was on the inside. Well, shit happens and if anything I suppose it further adds to the charm of this humble record of genuinely raw hardcore punk music. 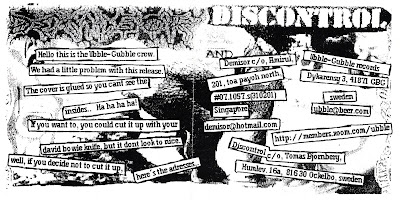 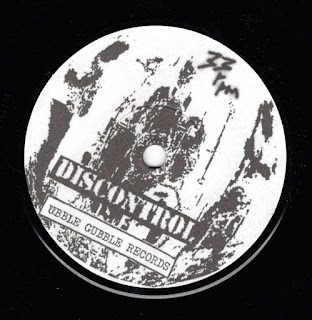 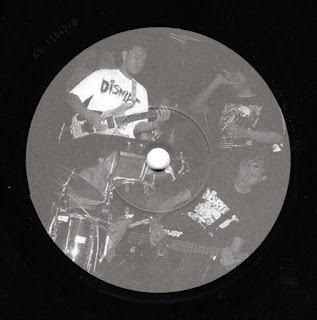 Primitive Ways
Posted by The Earslaughterers at 19:47 No comments: