A few months ago (well, almost a year really...), Dave from Self-Abuse stumbled across my awe-inspiring review of The Mad Are Sane's demo Lp that resulted from the collaboration between Puke'n Vomit and Abused Records (Self-Abuse's own label). He kindly proceeded to send me another Abused Records release, this cd, that includes the recorded works of Self-Abuse between 2004 and 2014. Needless to say that the deserving staff at the Terminal Sound Nuisance HQ was quite pleased. 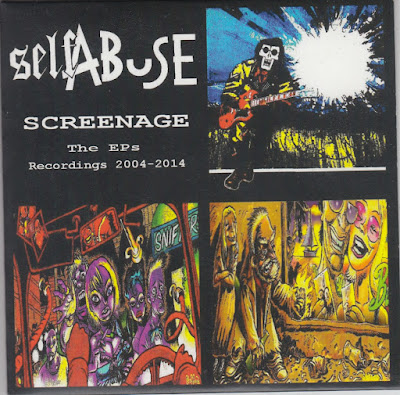 In fact, the connection between The Mad Are Sane and Self-Abuse isn't solely based on a common label. Indeed, both bands were from Bournemouth, were part of the anarcho scene of the early 80's and, as I understood it, Self-Abuse's singer Andy was part of one of TMAS' late line-ups (the member turnover was apparently quite heavy after the release of the "Reality" demo which accounts for the very different sound of the 1985 "Look further than vengeance" demo). Both bands used to share a rehearsal space and gigged together, notably with The Amebix (back when they still had the "The").

Self-Abuse story is not uncommon for a young punk band with something to say in the 80's. They were around between 1982 and 1985, recorded a couple of demos, had a few comp tracks, did one solid Ep, were supposed to release another one that never materialized and eventually split up without achieving their true potential. SA's first demo, "State of mind", recorded in 1982, merely hinted at its much superior follow-up, the 1983 "Teenage" demo, that laid the foundations of their sound. It is not that easy to describe Self-Abuse. They were not what you would call an original band, their music was (and still is) solidly anchored in traditional punk music, and yet they still manage to get the listener's attention through the additions of catchy chorus, or guitar leads, or some particularly tuneful vocal parts. I love listening to this kind of bands because it is "feel-good punk-rock". It sounds familiar, it is very well-executed for what it is, it has heart and enough smart songwriting to keep it fresh and enjoyable. It breaths genuine punk-rock with attitude, nothing more, nothing less. It is a bit like drinking a good cup of coffee, comfort punk if you will. But I digress... 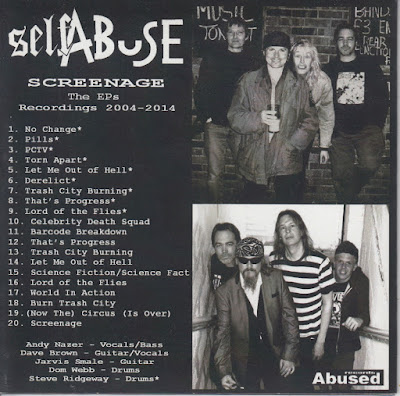 Following, this strong demo, Radical Change (Disrupters' label) released the glorious "Soldier" Ep. Even if you are not a sucker for British punk music (in which case you merely suck), the fact that the title track is an instant hit deserving of inclusion on any vintage anarcho mixtape is undeniable with its singalong chorus and its infectious guitar riff. Sadly, apart from two songs on the Xcentric Records compilation Lp "Party pooping punk provocations" that also had the Stupids and Anihilated, it was to be SA's final vinyl output in the 80's.

In 2004, the band reformed with the exact same line-up, which is pretty rare to say the least, and started gigging and recording again and that's what "Screenage" is about. Now here is an interesting case of the same people playing together again 20 years after and, for the better I must say, they are still doing old-school punk-rock with a tune and something to say. While many reformed bands kind of miss the mark by trying to sound too modern and by overproducing often average songs, Self-Abuse focused on what they always did well: penning top-notch catchy punk-rock songs. The band has often been compared to Chron Gen, Newtown Neurotics or Demob, which makes sense, although with these new recordings I feel there is also an American influence creeping in, especially in the vocals, that reminds me of Social Distortion or even Bad Religion at times, and in the strong presence of the guitar. I must admit that I miss the strong English-accented vocals but then the new style of singing works very well with the music.

The cd contains three Eps, 2004's "No change", 2007's "Celebrity death squad" and 2014's "Burn trash city" (a new drummer, formerly of the Demonic Upchucks, had been recruited for these two last Ep's), as well as unreleased tracks from the respective recording sessions. Out of the three records, my favourite is "No change", a truly impressive effort with effortlessly catchy and tuneful songs, two of which are brilliant re-recordings of old songs that appeared on "Teenage". I was not so keen on "Celebrity death squad"'s production and some of the songs might be too rock-sounding to my Discharge-abused ears, but their last Ep, "Burn trash city", has a clearer, simpler and more energetic sound that fit their brand of punk-rock much better. The lyrics are not included in the cd but from I can gather the texts are both smart and punk: songs about life in our modern societies, the madness of the powers that be and "self-medication" in the face of the daily grind.

The icing on the cake is a cover of "World in action" by... The Mad Are Sane! I love the idea of covering a fellow local punk band and the result is pretty good too, although you can tell that Self-Abuse's field of expertise isn't exactly the same as The Mad Are Sane's.

There is another very good review of "Screenage" on the Louder Than War website (here). Now, to wrap it up, if you bump into Self-Abuse at a gig, get that cd, it is the perfect introduction to what the band sounds like now. And while you are at it try to find their 80's discography as well, Grand Theft Audio released just that in 2006 and it's called "(I didn't wanna be a) soldier". And since everyone knows that vinyls are so much classier than cd's, also try to put your grubby hands on the Lp reissue of the amazing "Teenage" demo on Loud Punk Records (they know what they are doing, they also released some External Menace, Virus and Germ Attak). It is one of the unsung great demos of the second wave of British anarchopunk. 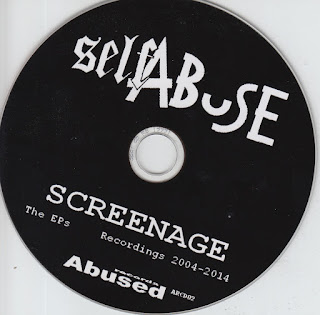 
Posted by The Earslaughterers at 18:27 6 comments: