Genital Deformities / Subcaos "Who did this to my sister?" split cd, 1994

I honestly feel a bit sorry for the snobs who have an aristocratic disdain for the cd format, especially since most, if not all, of them didn't grow up with vinyls. Like any self-respecting punk geek, I largely prefer vinyls, but I certainly don't despise cd's. They may not be as cool (but then, nothing is quite as uncool as cd's these days) but let's remember that they are sometimes the only way to get some recordings with a decent sound (for some reason, the vinyl elite doesn't seem to mind listening to youtube or shitty mp3's) like discographies including demos or unreleased tracks or whatever. 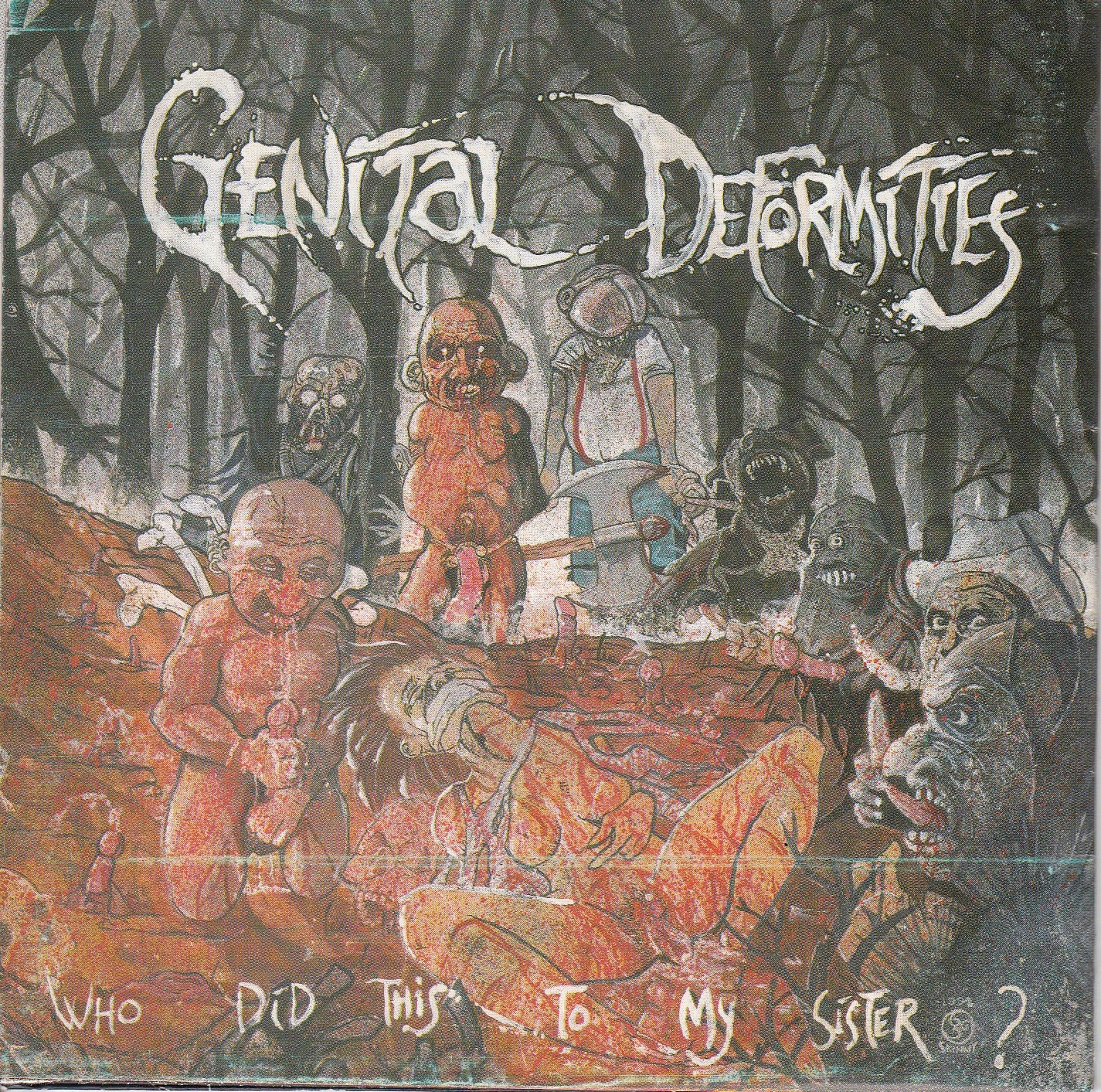 And sometimes, even 20 years ago, some records were only available on cd, which must have been rather unusual in the DIY punk realms then. In fact, with this one cd you could have released two full Lp's of Genital Deformities and Subcaos. Ataque Sonoro, the label, must have loved the concept of the packed split cd since they released another very worthy one one year later with Policebastard and Defiance (who were no Punkcore infidels then). 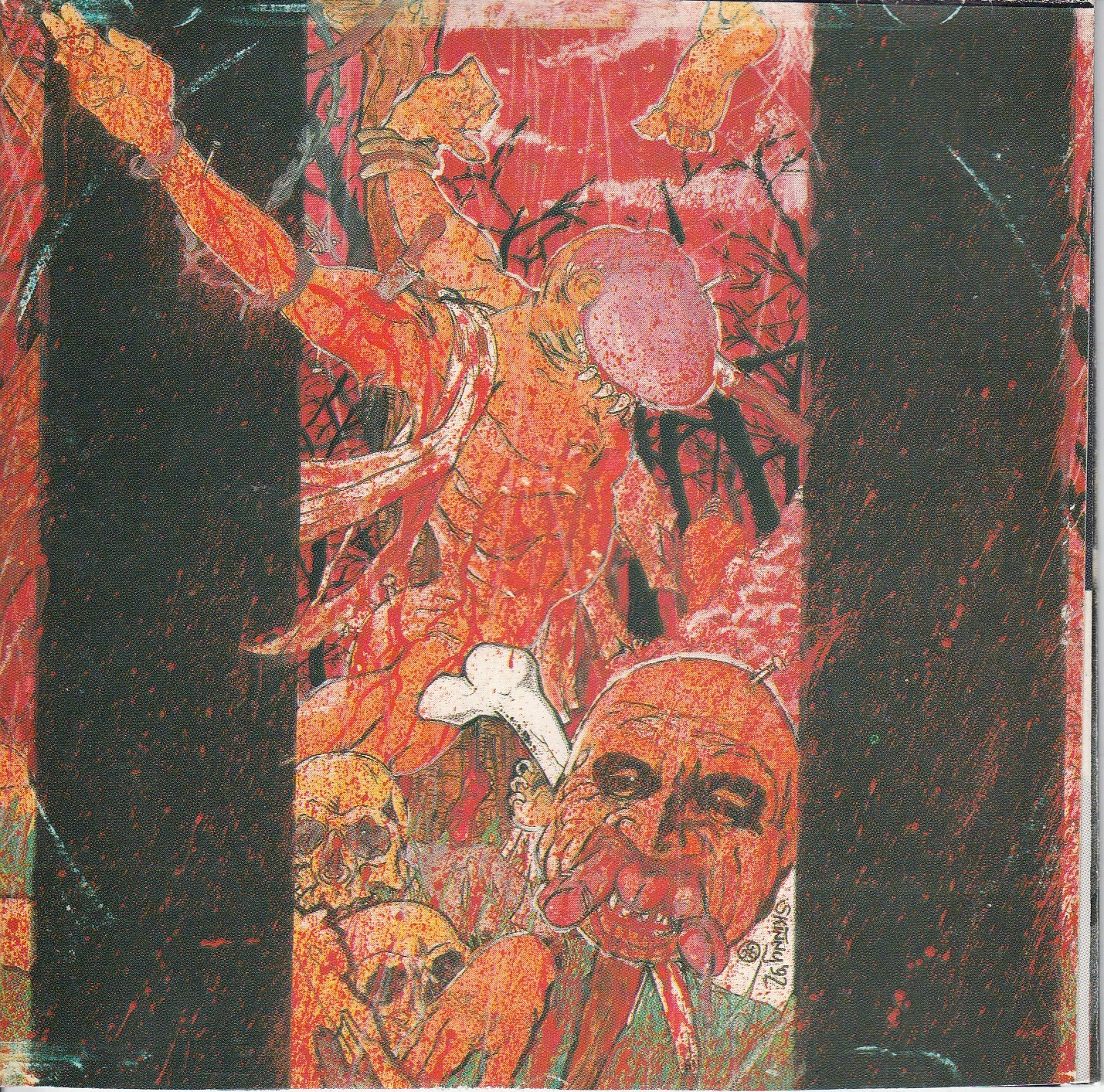 I see this record as a genuine 90's crust classic, albeit a largely unsung one, with, to my right, the almighty Genital Deformities from the Birmingham area, and, to my left, the Lisbon crust heroes, Subcaos. As knowledgeable as I may be in UK crust, one of my main obsessions in my exhilarating life, GD remain a bit of a mystery to me. I know they started out as an unlistenable all-out-noisy-bollocks grindcore band similar to Sore Throat and I dare you to listen to their 1987 demo without fainting. In 1989 they released the fantastic "Shag nasty Oi!"Lp, a crucial record that blends old-school filthy metallic crust and shambolic grindcore with over-the-top, even goofy at times, vocals. It has to be said that the Lp cover is possibly one of the ugliest one, if not the most embarrassing, I own. I must admit that I don't wear my GD shirt everyday. Although my copy of that Lp doesn't have an insert (was there even one?) I am pretty sure that there must have been some significant line-up changes along with the new musical direction in the early 90's. In 1992, the demo "Profession of violence" (which would be released as a split Lp with Nuclear Death a year later) indicated that the band had truly found its own sound, an impression confirmed with this split cd with Subcaos. It is unclear whether GD played a lot of gigs when they were active in the 80's and 90's and sadly they are not included in Ian Glasper's book (from what I recall, they didn't reply to the questions in time... what a shame). What I can say is that Tom Croft, who joined Excrement of War and Doom in the early 90's, doesn't appear to play on any of GD's 90's recordings, although he does take part in the newly reformed GD.

Q: What can I expect in terms of sound?
A: Top of the shelf UK crusty metal-punk.
Q: Great! Could you be more specific?
A: Of course my son. You remember the cheesy "metal-punk death squad" debacle from a few years ago?
Q: Sadly, I do.
A: Well, GD did it a thousand times better without the lame posing. Just picture a bunch of original crusties playing Celtic Frost-influenced hardcore punk with a 90's British punk flair and a crunchy metal sound. It is beefy, powerful and mean with guttural, threatening vocals. Know what I mean? Not unlike Coitus or Corpus Vile, or even recent bands like Gurkha or Warprayer, but with a distinct twist that makes GD remarkable.
Q: Thanks! You're so awesome!
A: Don't mention it. I'm only doing my job.

Despite a name that probably played no small part in the relatively small amount of GD patches in existence (unless it was pisstake of gory metal? just some silly and juvenile punk humour like the Pax compilations? who knows...), GD was a serious band with decent, angry anti-government, anti-religion, anti-system lyrics (as the genre requires I suppose) but you can also find a couple of songs about dark characters lurking in street corners as the cover suggests. Really good shit indeed. 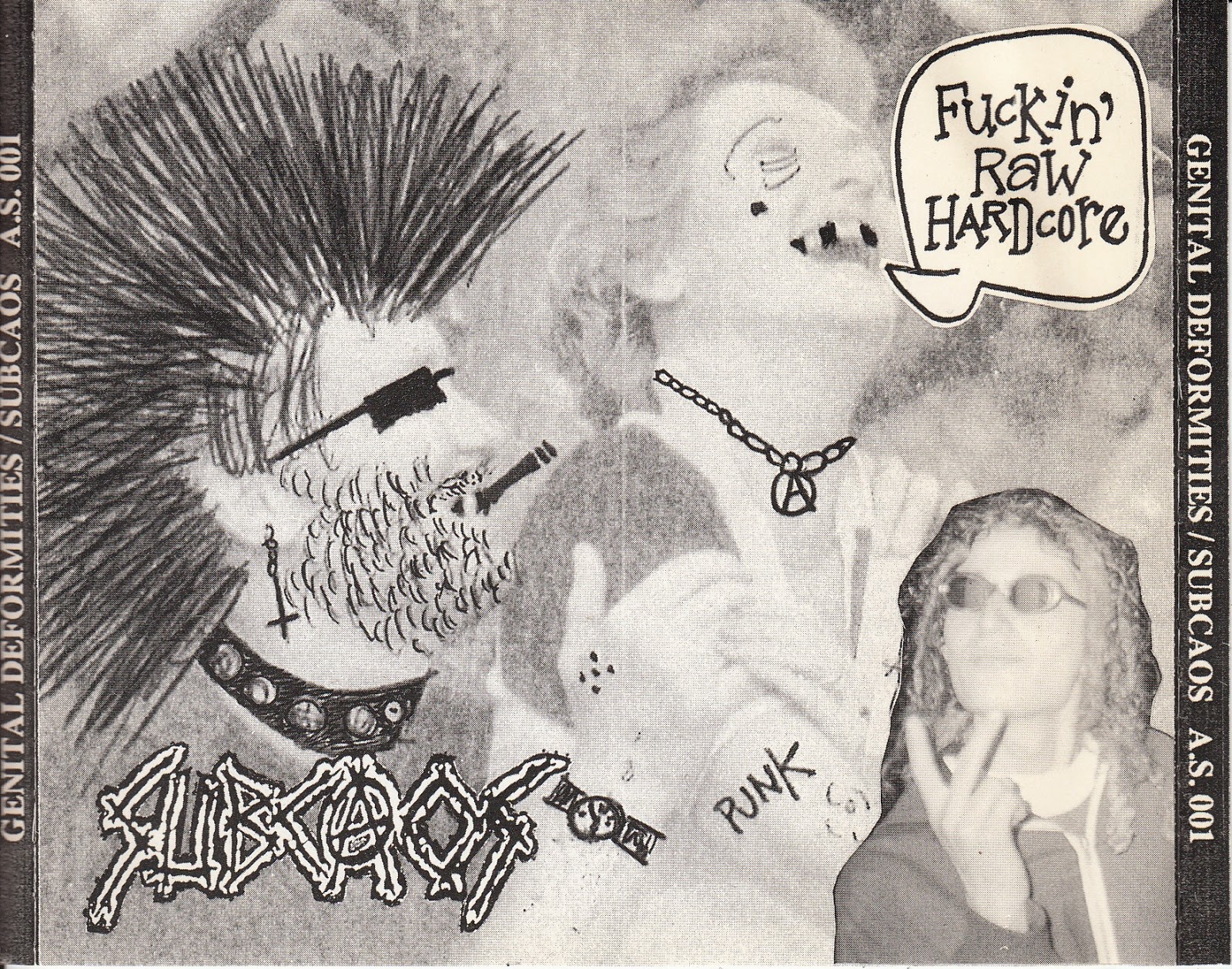 If you are into crust music, and assuming you have any self-respect, Subcaos should be no stranger to you. However, more realistically, I suppose most of you are not all that familiar with them. Along with Simbiose, they are Portugal's crust warriors, and their 90's output is definitely worth an earbleed. In fact, I personally rate Subcaos very high on the always reliable Hiatus music scale. By 1994, when they also released the great "Revolution" Ep, the band was at the top of its game and easily one of the best crustcore band in Europe. Granted there were a lot of bands doing the Doom/Hiatus thing in the mid 90's but Subcaos did it particularly well and this split cd is certainly their best work. Expect an intense dual vocal anarcho crustcore attack bringing to mind Disrupt, Hiatus and Extreme Noise Terror. The production is absolutely perfect for the genre: effortlessly raw and powerful. The addition of a female singer on some songs (just like on Disrupt's "Unrest"... Coincidence?) and the fact that most of the songs are shouted in Portuguese definitely make Subcaos stand out. What I particularly enjoy is the punk-as-fuck feel of the songwriting: pummeling Swedish-style drums, good, simple riffs, aggressive and biting crusty vocals that are not too forceful, some spoken parts and carefully chosen samples to show that they were an angry bunch with something to say... It feels spiky, genuine, sloppy, youthful and pissed off which is everything you are entitled to expect from this wonderful genre. It is almost as groovy as Stàte of Feär, which is no mean feat if you truly think about it. Lyrics about police violence, animal abuse, political corruption, the uselessness of voting and, of course, war will remind you of the decade of production. Icing on the cake, they have an anti-Rupture song and they cover Doom's "Relief" which was a prerequisite of crust back then. 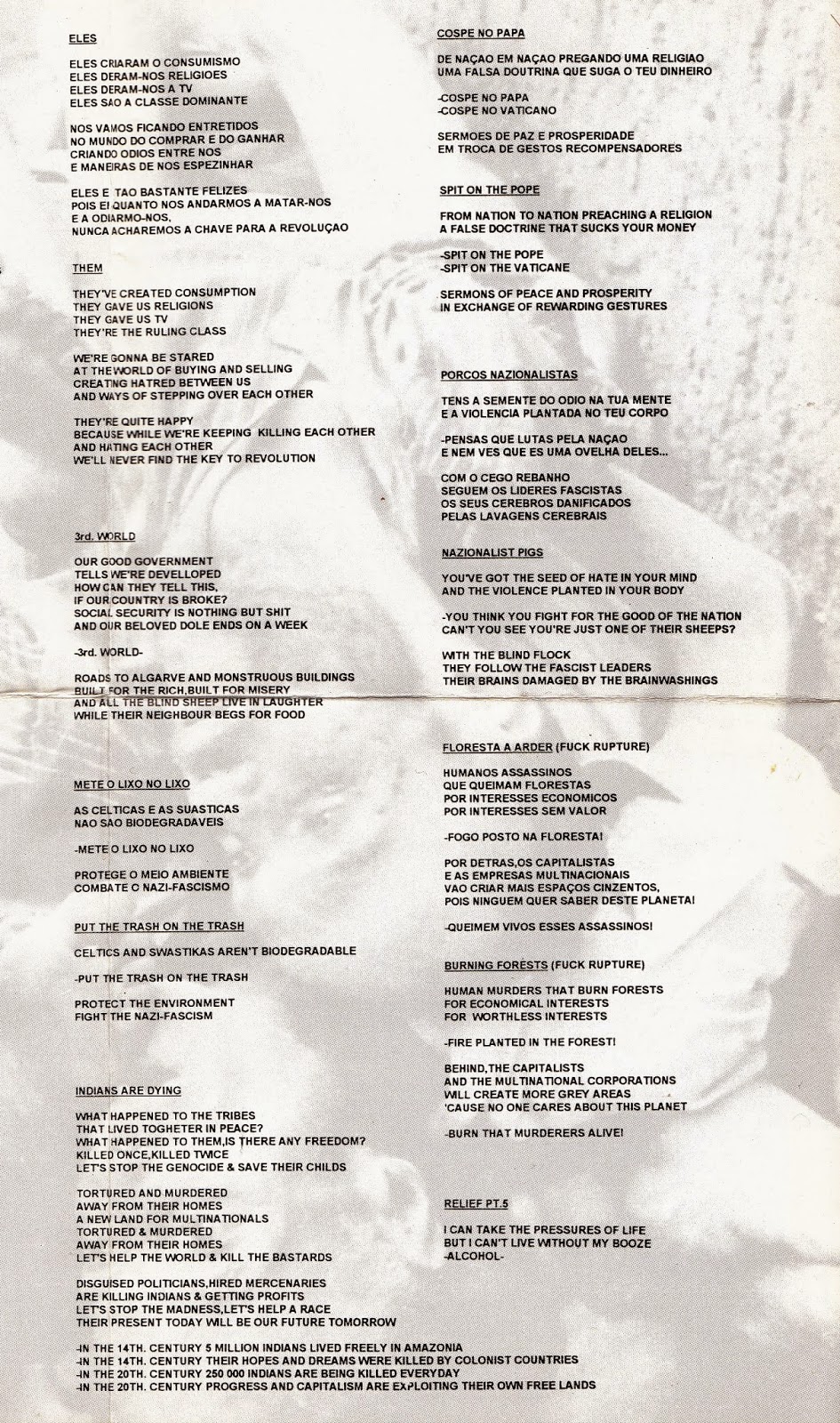 To celebrate the 20th anniversary of this split cd, the recently reformed Genital Deformities and the surviving Subcaos (who now look like the Portuguese chapter of the Mad Max fanclub and play solid metal-punk) did a split Ep in 2013. Pretty good to be fair but nevertheless miles away from this top quality record that deserves a respectable spot in the 90's crust legend. 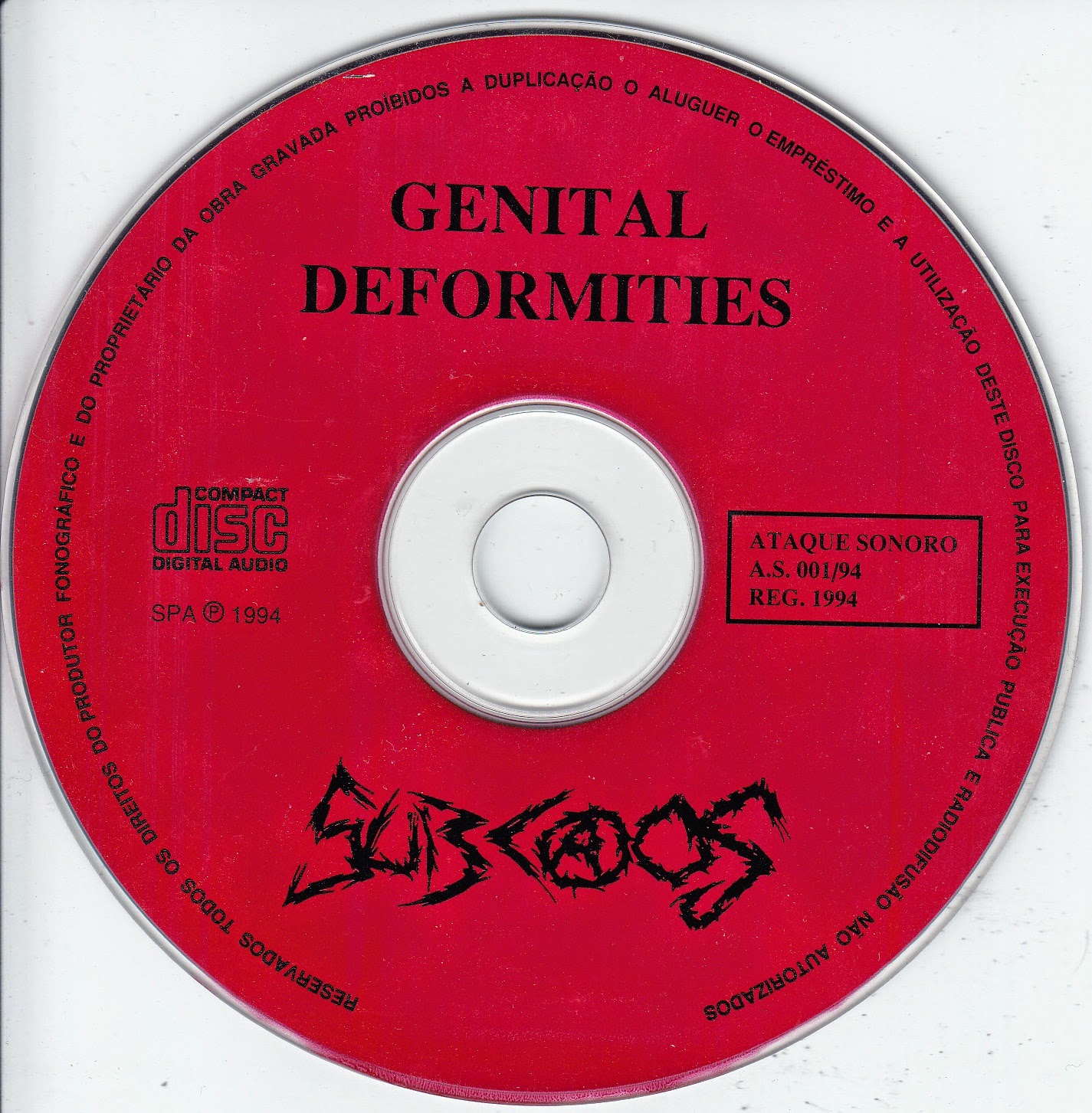 Posted by The Earslaughterers at 16:04 5 comments: