Portland. A town that has made young - and not so young - punks dream for decades. I first realized that PDX (that's what cool kids call Portland) was one of the major places to be about twenty years ago, a distant time when I was seriously getting into the d-beat and crust thing. I don't think I could actually locate it on a map. To me, Portland was just that town that apparently hosted a team called "the Blazers" like in the Bulls vs Blazers 1992 video game I owned on Sega Genesis indicated. Good game that though I don't care for basketball. But quickly, "they're from Portland" became a recurring descriptive notice that was often eruditely applied to bands that I liked. "Tragedy? Oh yeah they're based in Portland". "Atrocious Madness? Ace Japanese-styled crasher noize from Portland" "Axiom? To me one of the best crust bands of the 90's to come out of Portland." "Hellshock? If you kids only knew the former classic Portland bands the members used to be play in". I could go on and on. Portland was like a magnet for class bands while Paris felt like a magnet for tasteless wankers. Of course, this caused more than just a little envy but in retrospect, now that I am a wiser, more serene person who have replaced constant self-deprecation with unabated egomania and conceitedness, I am at peace with the fact that PDX has consistently delivered solid punk bands since the birth of punk-rock and we have not.

The stormy emergence of global music streaming and the constant availability of an almost complete catalogue of every punk records may have diminished a bit the glamour that PDX punk used to enjoy and with a much wider - albeit more superficial - knowledge of the world punk history it is not rare to read twenty-something wish they had lived in Osaka in the mid-90's for the Final Noise Attack concerts - a sensible fantasy indeed - or, more much deranged, in France in the early 80's in the Chaos en France era instead of PDX, a clear sign that some marbles have been lost. In the early 00's, I vaguely entertained the dream to one day play in a crust band there, misled into thinking I would be a better musician at the other end of the globe. Let's face it, I would still have been rubbish but in a town where it is constantly pissing rain. 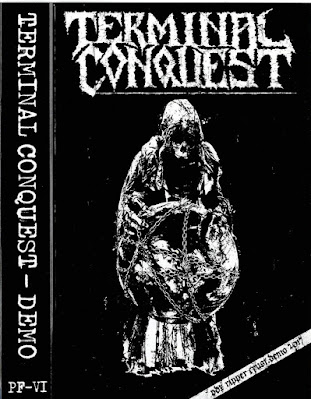 My always alert crust sense (not unlike an eighth sense or a punk version of the Force, only I don't feel the presence of Earth spirits or associated hippie bollocks but of good crust) has often focused on PDX, by tradition but also because the last few years have been prolific over there. Terminal Conquest is a band that immediately caught my attention, first because the band included - I assume they are no longer active and rather short-lived but I could be mistaken - members involved in other bands (guitar player, Brandon, was in Vastation at that time and former or current members of Krang, Night Nurse and Black September were also invited to the party) some works of which I rate quite high. And second because I am a massive, some would say immoderate, fan of vintage Sacrilege and TC can be described as a definite, unequivocal Sacrilege-loving band, like the brilliant After the Bombs before them or their contemporary Lifeless Dark. 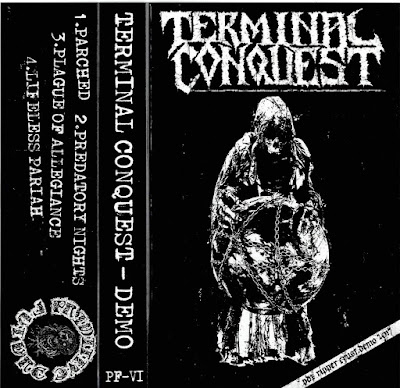 The worship of Sacrilege can take several shapes. For instance, Boston's Death Evocation and the aformentioned Lifeless Dark, for their unabated love of the Brits, must be considered as other Sacrilege-loving acts. However, DE and LD focus on '85/'87-era Sacrilege (Behind the Realms of Madness, the '86 demos and Within the Prophecy) whereas TC work primarily on the '84/'85 years (the first two demos and Behind the Realms of Madness, aka Sacrilege's undisputed masterpiece). These may seem like hair-splitting details and overfine distinctions but that's what Terminal Sound Nuisance is all about and I am being paid by the word so I do have to fill the pages. I would argue that the raw organic sound of TC's demo tape enhances that early Sacrilege feel which I personal prefer to their more thrash/UK crossover style. Thank fuck no band has tried to copy Turn Back Trilobite yet but let's just keep our collective fingers well crossed and be ready to cancel those who will. The other major influence has to be Montreal's After the Bombs, arguably the first band to go full-on vintage Sacrilege. The comparison makes much sense here as TC do share that epic heavy metal-punk groove, crunchy guitar sound, not to mention the hyperbolic soloing at times, as well as those great reverbed vocals that ATB's were known for. Singer Natanya does a brilliant job at replicating Tam's vocal style and her accentuation, scancion and overall delivery are impressive indeed, especially considering the fact that she is not - I suspect - a British native. I am also reminded of Pink Turds in Space's Greatest Shits in terms of vocal tone, which is clearly another compliment. 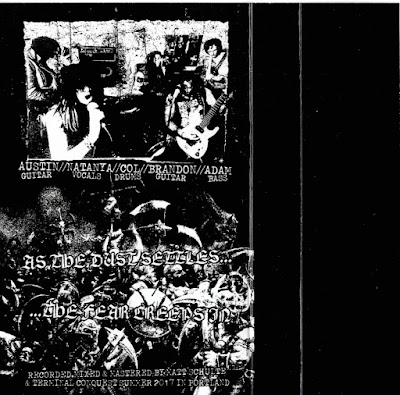 Without question, this 2017 demo does a great job at displaying pure Sacrilege love and, through their focus on the '84/'85 era - clearly metallic but still heavily influenced by DIY hardcore punk and not yet too thrash-metal oriented - I think they may very well be my favourite Sacrilegious band of the decade. Come get your prize you naughty bastards. It has to be pointed out that this recordings is just a demo and while the production is fine, it is quite raw which I very much enjoy, one cannot help wondering what the band could have achieved on a full album with more time and space for the songwriting and narrative possibilities (more ambient moments or instrumental interludes?) and the visuals. But since I don't think the band is still active, such musing will forever remain wishful thinking. In case the listener is not quite sure about the band's artistic stance with the cover depicting a Reaper grimly touching a chained planet Earth, TC wisely added the illuminating Hellbastard reference "PDX Ripper Crust Demo 2017" at the bottom. The tape was released on Primitive Future from Phoenix, a label responsible for records from Cancer Spreading, Stagnation and Nightgaun (it's run by someone from this band I think). Members of TC are still active in bands with Matt doing metal things (Sangre de la Luna, Oppressive Descent, Death Fetishist and other skacore bands) and Mike (he doesn't play on the demo) playing in the brilliant Genogeist and Decomp. 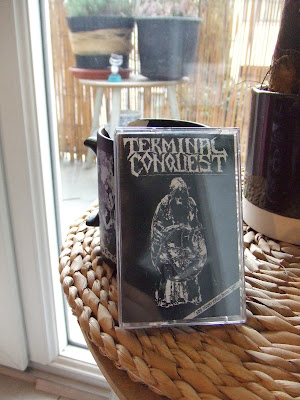 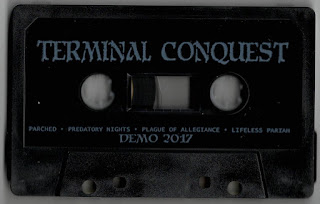 Posted by The Earslaughterers at 11:16