There we go again after a short break during which I went on tour with one of my bands. In addition to being a world renowned crust reporter, recipient of five Stench of the Year awards, I also happen to entertain wild punk crowds of about 30 to 40 people on weekdays and up to 80 on saturday nights if the weather is alright. Arena punk-rock if you like. This assortment of human qualities never ceases to amaze my friends and family and even I have trouble realizing how much of a genius I am in the eyes of many (apart from my boss for reasons that probably have to do with me wearing my Genital Deformities shirt at work although I never asked the tasteless twat). I mean, we did draw 43 people on a cloudy wednesday night. But all good things come to an end and here I stand before my computer screen trying to decide if the description "horrendous terminal filth stench crustcore" coined by Osaka's marvelous Revenge Records - run by Jacky Framtid/Crust War - is actually relevant to qualify Zikade's artistic endeavours or if the "terminal filth" might not be considered as something of a deliciously purposeful but still a little misguiding stretch. I am back to philosophizing.

This Ep is the second split record of the Live by the Crust, Die by the Crust series after the NIS/Warpath Ep. I have always loved split record as they epitomize the idea of collaboration, togetherness and friendship that DIY punk is supposed to be about. While the first split Ep can be said to be an accurate illustration of the early 2010's Italian crust scene and is therefore rooted locally, the Braincëll/Zikade Ep is an international initiative. Both types of split records are equally relevant and part of the traditional fabric of punk music: the local dimension is as meaningful as the international one. You can call me a naive romantic fool - although not to my face as I am hypersensitive when it comes to subjects tied to crust split Ep's - but I love the idea of breaking down barriers and, even if it is just a humble punk record, it is also, and I would argue primarily so, the network of friends in action.

Because I am a shameless Japanese crust nerd - admittedly an acquired taste as it took me some time to properly relate to its inner dynamics - my attention was immediately set in motion the first time Zikade was mentioned to me and when I saw that they borrowed the Sacrilege font for their own name, like Sacrifice before them, my senses were on full alert. I was ready to jump on my prey like a graceful tiger awaiting for its meal or more realistically like a drooping smug geek staring at rubbish and mushy live videos of Zikade on youtube. In the end, I did get to listen to Zikade properly and they delivered exactly what I expected and wanted them to: Japanese-styled old-school Mermaid cavemen crust. I did not want to be disconcerted or challenged in the least. My thirst for crust needed to be assuaged and this record more than made up for it. But let's start with the first side and Braincëll. 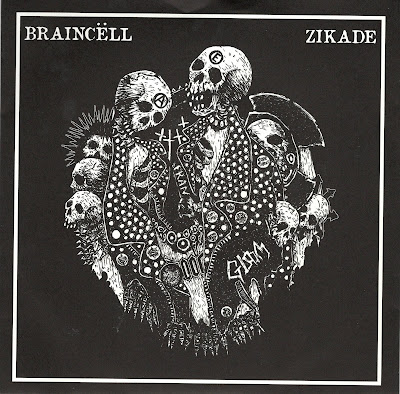 I was familiar with this Kuala Lumpur crust unit since their Mindlock tape Ep in 2016 and although I did not scout for the vinyl version of the recording, it did stick as a solid 90's käng crust effort which was very pleasing as this type of sound is sadly not as widespread and popular as it used to be (because of indie punk and shit). Unsurprisingly the members of Braincëll are old-timers of the Malaysian hardcore punk scene who have been involved in bands like Antiprotokol or Appäratus since the early/mid 00's. You can tell they know what they are doing that is to say, as they proudly state on their bandcamp page, "90's crust up your arse!". And who doesn't want that? The three songs on the Zikade split were mastered by Bri Doom and have that 90's Distortion Records crust käng vibe that I am a sucker for, with a pummeling dis-beat that is at the forefront of the mix. This is direct and brutal crustcore done with mastery and super gruff vocals, a bit like a Distortion-era blend of Phonophobia era Extreme Noise Terror, the mighty 3-Way Cum and mid-90's Doom, with an added flavour of early Driller Killer. Nothing new per se but in those dire times, I will go along Braincëll's 90's trip any day. Undeniably one of the best bands in the Swedish käng crust style. 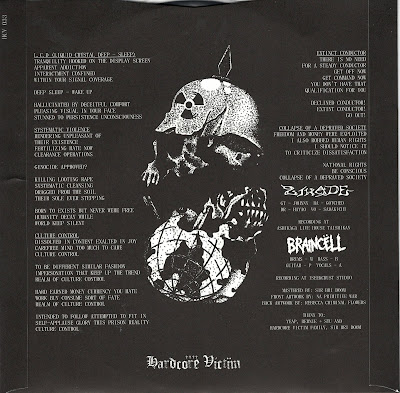 On the flip side Zikade, from Ashikaga, provides two songs with a dirtier, rawer production that meaningfully belongs to the extended crust family but is part of a particular branch that religiously reveres crust pants. Zikade don't offer anything new and proudly place themselves in the grand Japanese crust tradition of utter unabated Doom/Sore Throat-love, a sentiment that started with Macrofarge and peaked with Abraham Cross and early Reality Crisis in the 90's. Zikade do have a more old-school metallic crust to their sound, especially the guitar that is not unlike '87 Deviated Instinct, '86 Antisect and, I cannot help thinking, an SDS influence as well, not in terms of tones - at all - but in the songwriting, and whether is is intentional or just unavoidable, since SDS stands as this ultimate Japanese crust classic, remains an open question that won't probably make anyone lose sleep although I did struggle for at least five minutes yesterday night. If you are into that type of crust sound that glorifies emphatic early cavemen crust gruff vocals then Zikade will definitely be your dodgy-looking bottle of smelly homebrew that will have you sleep in the gutter of crust in no time. Prior to this Ep, the band has released two demo cdr's in 2016 and 2017, the first of which sounds like a rough primitive version of their sound, you have been warned. Singer Sadakichi also played in Pokkoider, a rather - intentionally? - unlistenable noisecore-drenched dual vocal cavemen crust band that I can only recommend for well-trained listeners of crust as a beginner might possibly go irremediably mad. It can also be used to repel rodents.

This split Ep cannot be said to be a classic, however it is a very solid slice of tasty brutal crust representing two different but complementary schools, the käng-influenced 90's crustcore sound for Braincëll and the traditional Japanese Doom-loving stench crusher take of Zikade. It was released in 2019 on Hardcore Victim, a top-notch Melbourne label active since 2008 that has been putting out class records from the likes of Zyanose, Enzyme or Sistema en Decadencia to name some of the most recent ones. What could possibly have gone wrong? 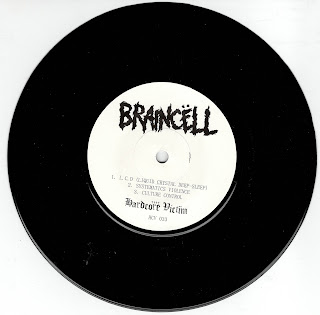 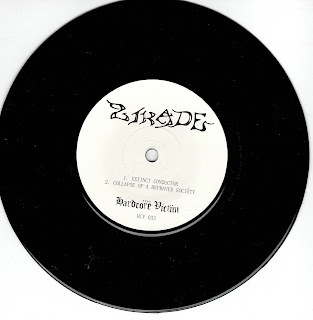