The formidable abundance of readily available punk music, online just as much as in physical formats (which we used to call, in the old days, "a record" or "a tape" or even, for the embarrassingly unfashionable ones among us " a cd") can be rather vicious. On the one hand every single new recording - even the shite ones it has to be said - can be streamed, digested, stored in a corner of the brain and digested instantly, on the other, well, it has become impossible to even give a chance to many potentially worthy bands. Just listening to the first song of every new d-beat recording in a month would take you a whole afternoon, and I'm only talking about 90 second long bursts of noise. Imagine what doom metal fans and their eight minute long songs must go through because of the sheer profusion of new music, the endless flux of novelty. Poor bastards.

Even I struggle to give a go to bands playing subgenres that I hold close to my heart even though I do spend a lot of time clearing my personal soundscape from pretentious egg punk and shoegaze abominations. Tragically, despite my Sauron-like capacity to spot good crust from miles away, some top bands do escape my awesome attention and die trying in the luxurious mountains of Mordor while terrible hobbity postpunk acts manage to crawl through the epicenter of the Crustdom. I almost did not notice Helsinki's Keretik and only gave them a listen because the Lp had been released on Urinal Vinyl, an old-school UK anarchopunk label that I always keep an eye on, and I can't praise the Dark Lord enough since Terra Mater is an unsung jewel of gloomy metallic crust. And you know what? By which I mean you probably don't but are about to because I am going to tell you what you don't know, yet, but will be happy and surprised to and possibly thinking, aloud or not, "fuck me". In fact, you probably know Keretik under another name, Viimeinen Kolonna. 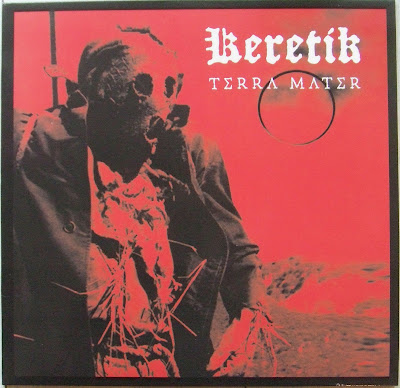 VK have been around since the early 00's and have released quite a few records on Agipunk, Hardcore Holocaust and of course Fight Records (who also have a hand in Terra Mater) so you have probably at least bumped into their name. I suppose the change of name - and the symbolical burial it implies -  signified the band's intent to try new things musically as Keretik has much more of an old-school crust feel than what VK's were famous for, that is to say thick, fast relentless thrashing Finnish hardcore. To be honest, and I am not trying to boast needlessly here, the first time I heard Keretik I thought that it was the new project of VK's singer as he has always had easily recognizable vocals. In fact, you could describe him as sounding like a crazy drunk on the street chasing you while aggressively yelling insults as loud as possible. But in a good, Finnish hardcore styled way, a genre renowned for its extremely hostile and pissed vocal aesthetics. The three members making up Keretik are not exactly novices in hard-hitting punk music as they previously made some noise in Rythmihäiriö, Agenda or the grossly underappreciated Amen. So they definitely have bad backs. 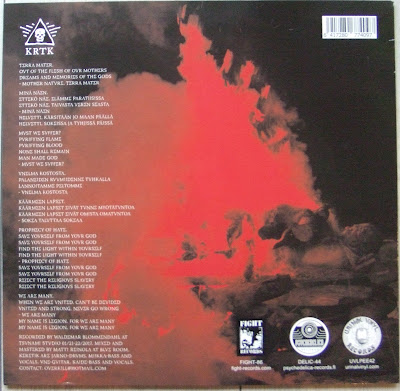 Keretik play raw, dark and direct old-school metallic crust with mean dual vocals - gruff and hoarse shouts versus evil and desperate yells - reminiscent of the Finnish hardcore tradition but that also has a lot to do with the language itself and its particular prosodics. Along with the genuinely torturous and aggressively punk dual vocals (one of the record's strongest point, they sound like a massive bollocking of biblical proportions, a "you're being grounded, no Discharge for two weeks" kind of punishment). Finnish does confer an original vibe to the music as few old-school crust bands sang in Finnish, apart from the aforementioned mighty Amen and proto-crust legends Painajainen. Keretik did not try to go for a massive crushing sound and kept it raw and primitive which fits with the record's rather short length for the genre, seven songs in eighteen minutes. The music could be described as primal and there is a certain Amebix influence in the songwriting. There are other elements brought to the table as gloomy pagan crust punk acts like Dazd also comes to mind (especially in some creepy melodies), as well Coitus for the dark and rocking thrashing squat-crust mosh-inducing riffs and the dual vocal post-stenchcore sound of A//Solution could easily be invoked too. The record itself is a little disappointing as there is no insert included and the visual does not really appeal to me. It was released on three labels, Urinal Vinyls, Psychedelica Records and, unsurprisingly the immortal Fight Records. And as a testament of the old-school DIY punk spirit the band decided to add a patch with the record. Thanks for that. 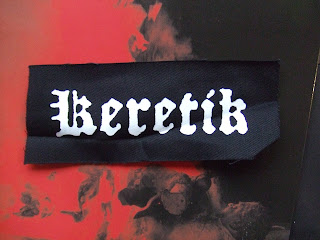 Keretik have another recording under their bullet belts entitled Tomorrow's Worst Enemy. It was recorded in 2021 and I am not afraid to say it pretty much stands as one of the best crust works of the past few years. Building on their raw and primitive metal punk vibe, thanks to a better sound and more articulate songwriting, Keretik have added a sense of crust epics and atmospherics without giving up on the aggression. Beside the aforementioned culprits I am reminded of Axegrinder and Misery as well. Top drawer old-school crust that I cannot believe went unnoticed. In fact, if I had not done some research about Keretik for this post, I probably would not have even known about the existence of Tomorrow's Worst Enemy while it is right up my stenchcrust alley. There is tape version of it, but the band is looking for a label for a vinyl release. You know what to do: support the band.

Posted by The Earslaughterers at 11:50