First, just a word to say that all downloads are technically working again now. I re-uploaded them all on mediabollocks so I guess it can only be a temporary solution anyway but hopefully I will have sorted something out before they kick me out - again. 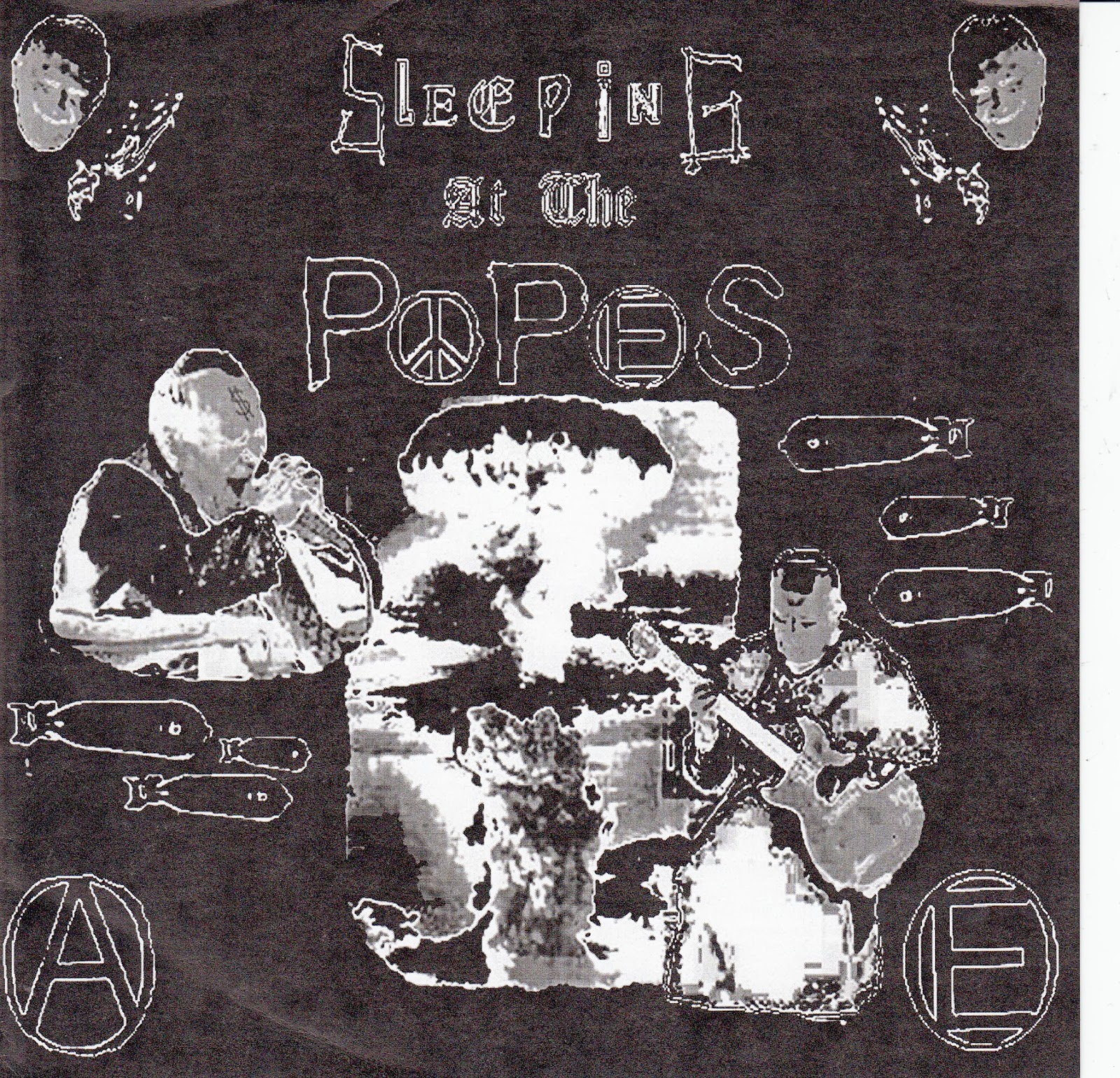 If you can read - for the sake of the argument let's assume you can - you will have noticed that this blog revolves mostly around my obsessive love for some particular brands of punk-rock (some would say "narrow" actually). However, nothing gives me more faith in punk than a loveable band coming from a scene I know nothing about. Not only is this intellectually stimulatin, but demonstrates punk's formidable ability to creep into unexpected places. Well, at least when I bought this Ep in 2006, I had no idea that there was, or had been, a punk-rock scene in South Africa. Mind you, this was very much a pre-internet age for me and no one had ever bothered to tell me that, indeed, there were and had been cracking bands over there. Now, 8 years later, thanks to some amazing blogs and truly dedicated old-timers, I know that South Africa produced some terrific punk bands in the 80's like Powerage, Screaming Foetus, Wild Youth, Chaos SA or (early) Voice of Destruction, and I am aware of a couple of more recent bands worthy of everyone's attention like Brafcharge, Touched by Nausea, Outrage, Anti-All or TDKM. If you want to know more about the scene there, I strongly recommend this blog South African Punk Downloads. If anything, and whatever your shitty tastes can be, it proves that punk-rock's driving force lies in its fundamental internationalism and if you are curious-minded, you will be able to find that there is quality punk-rock in Syria and noisy grinding hardcore in Pakistan (not for the faint-hearted this one!). But back to the actual music. 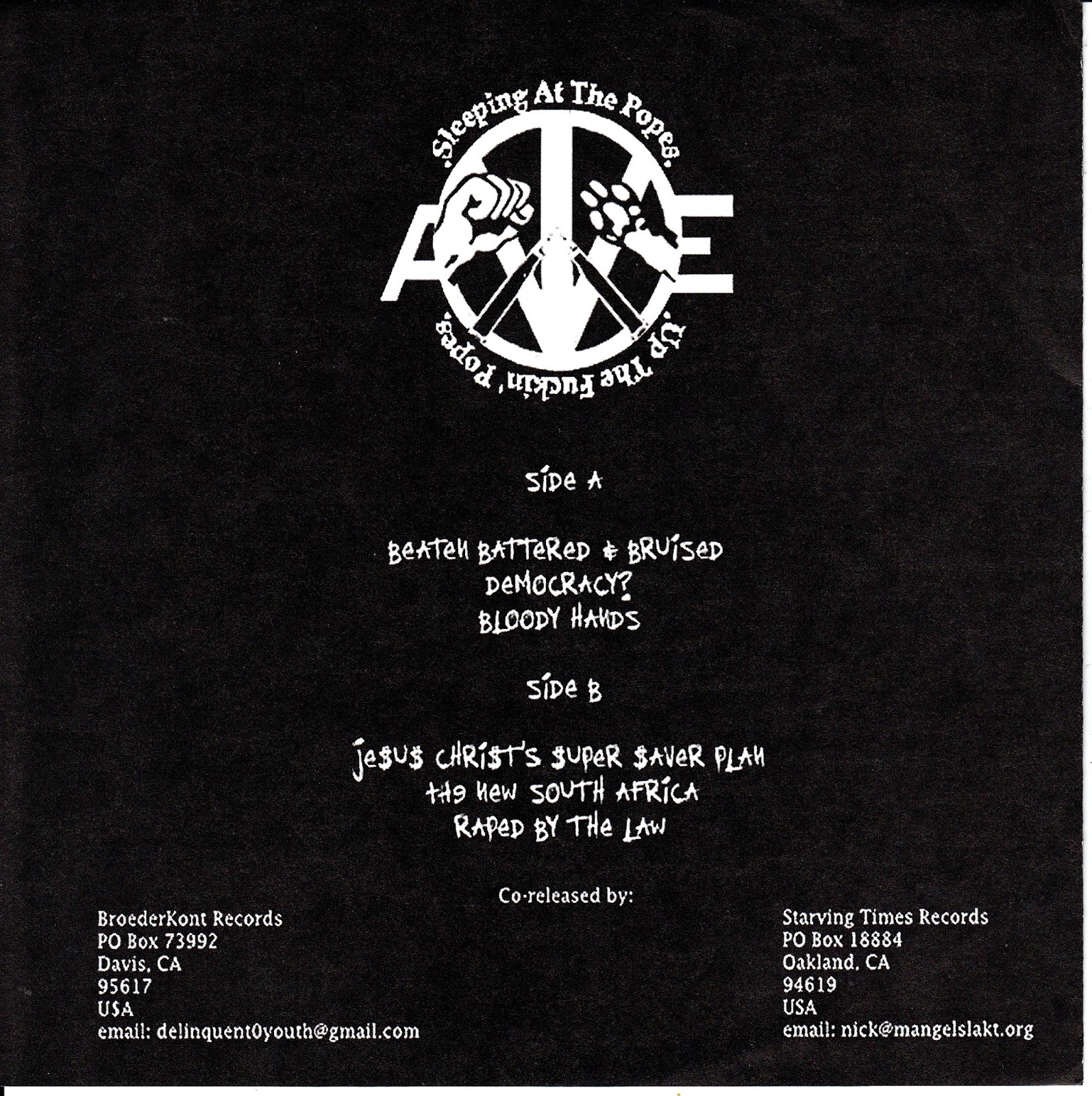 Sleeping At The Popes. What the hell lads? Really? Picking such a cryptic name for a band often means that few people will even make the effort of listening to you. Sad but true (recently I witnessed an amazing Italian band called Intothebaobab, really top stuff in the spirit of Nerorgasmo and Pioggia Nera, and I can't help thinking that a name with a baobab reference is an hindrance... oh well). But having grown up in the French scene, where choosing ridiculous names for bands is not only a common practice but almost a golden rule, I wasn't even scared when I ordered their Ep. SATP formed in Cape Town in 2004, recorded two demo cdr's, released that one Ep and split up in 2006. I would argue that SATP was part of a generation of punks which brought another set of influences to the South-African punk table. I hear a lot of 90's-early 00's US anarchopunk in their music, which is almost ironical since that type of sound was certainly on its last leg by 2005. But petty and futile considerations about trends notwithstanding, the Ep is really good in its own right. Fast and passionate hardcore-punk with two pissed vocalists (and, I understand, the additional voice of a screaming drummer), one doing the high-pitched yells in a rather fast hardcore fashion (all the rage in the early 00's, right?) while the other takes care of the more traditional Conflict-type vocals. The sound is not particularly heavy as SATP relies more on heart-felt, spontaneous anger than crushing power. This is only a guess, but this is the kind of bands that rule live: political punk music that is angry and to the point. As previously mentioned, this brings to mind bands like Civil Disobedience, Resist, Brother Inferior, or even the brilliant Counter-Attack, with a dash of 00's hardcore-thrash revival. 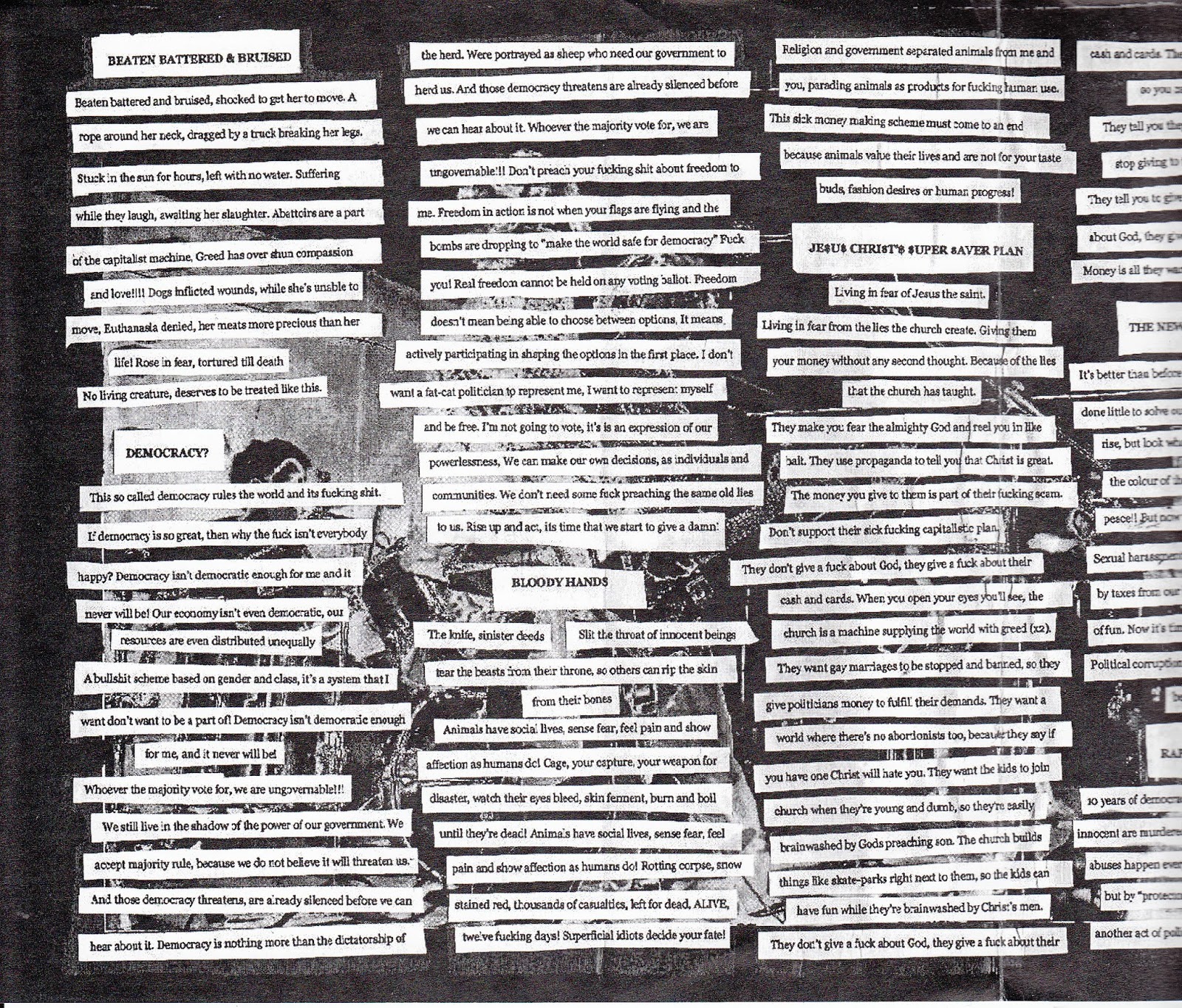 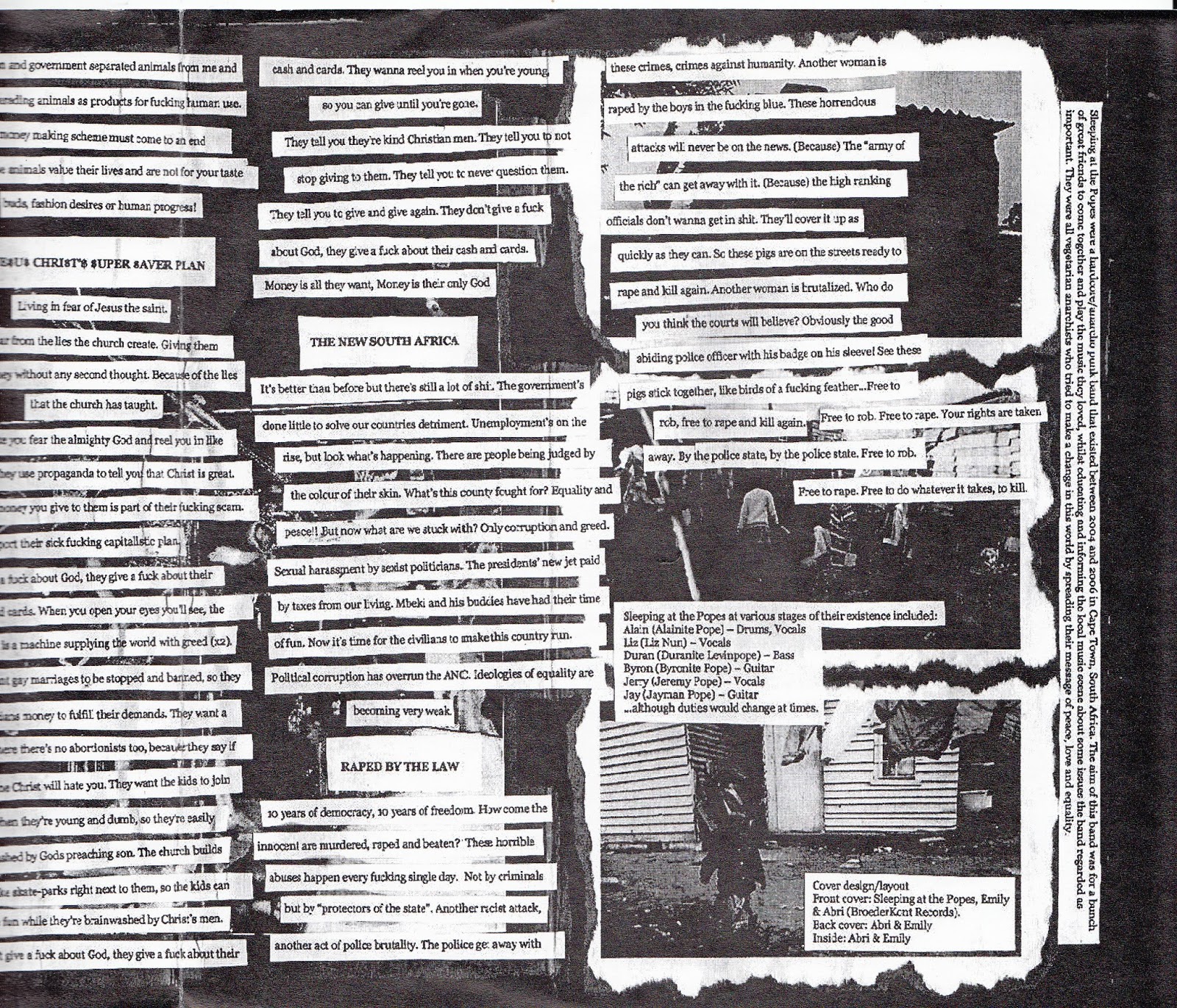 Lyrically, the band tackled issues embedded in the South-African context, with songs about the democratic illusions, the racist crimes and the sexual violence of the police, the corruption of the new "democratic" leaders... All told from a youthful anarchist perspective. In true anarchopunk spirit, this Ep just reeks of indignation and anger. Because of their moniker, I am pretty sure you'll be able to get it from the infamous "2 euro record bin" and honestly, you really should. 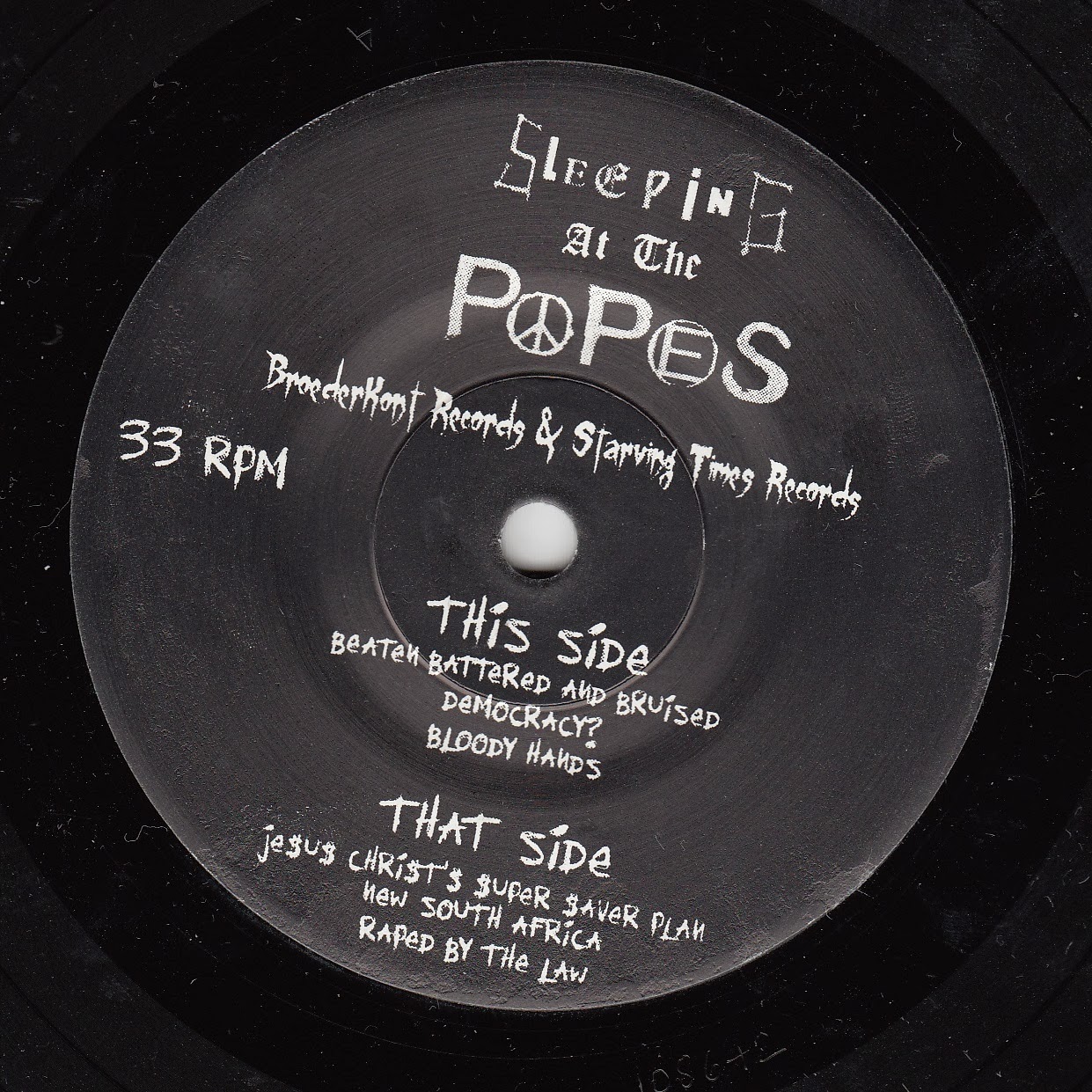 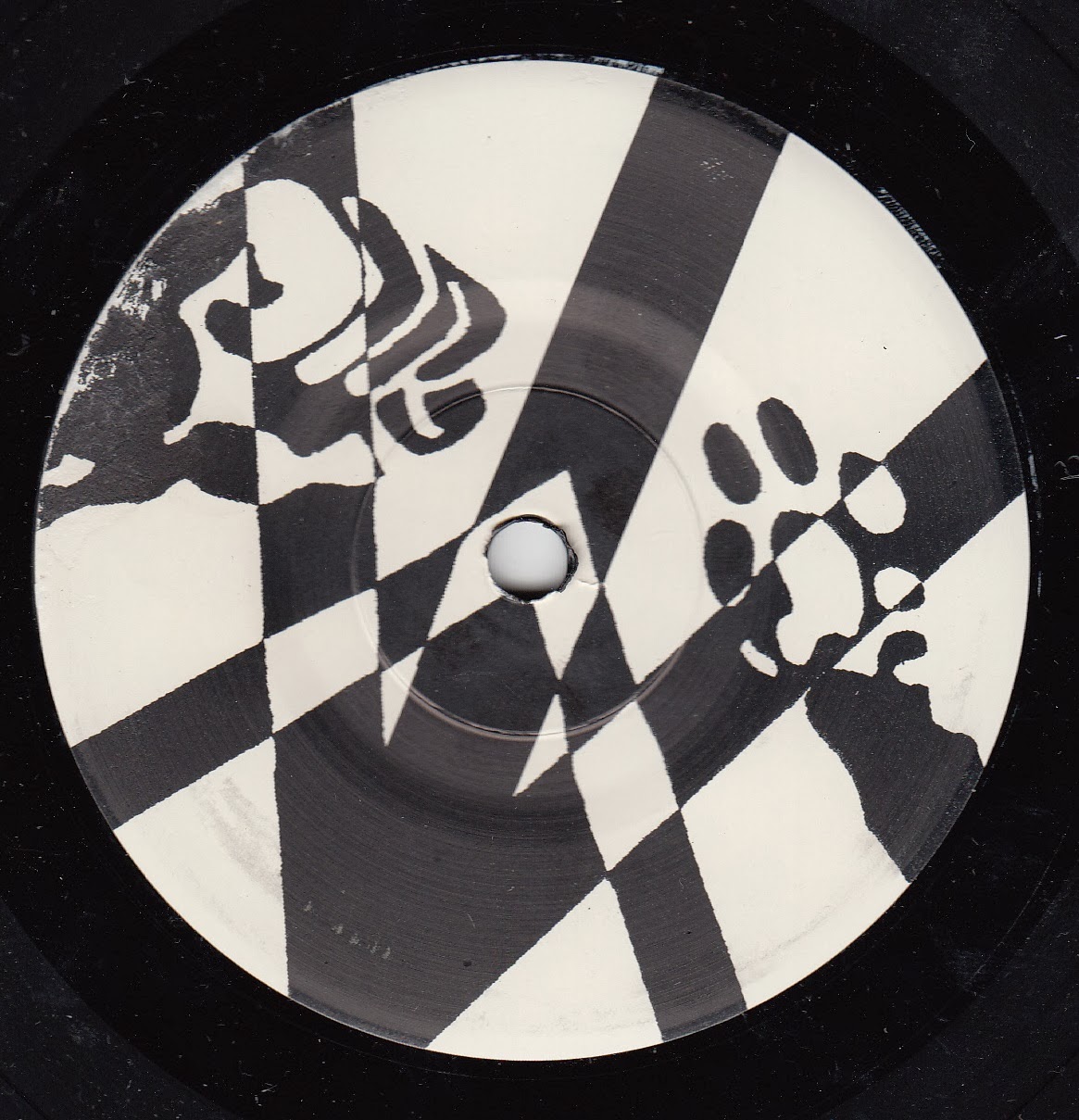 Sleeping at the popes!

Posted by The Earslaughterers at 19:17