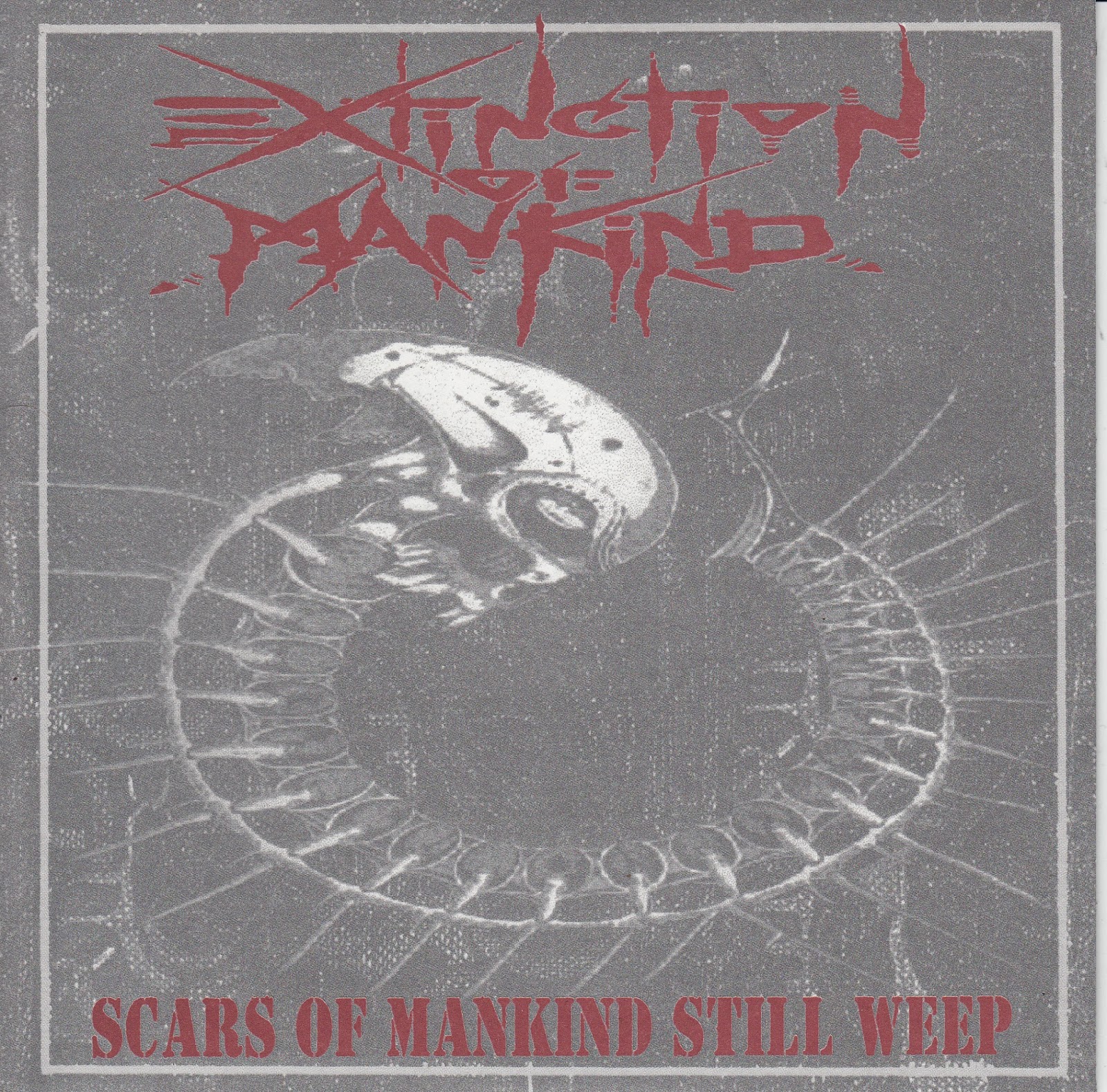 The fourth and possibly last seat at the "bands-you-shall-not-take-for-granted" table, just next to Misery, Hellkrusher and Warcollapse, had to be given to them, the second longest-running old-school crust band: Extinction of Mankind. To say that I hold EOM close to my heart would be an understatement. I am not sure anyone really cares (and if you don't, why don't you go download some indie-rock on another fancy blog) but EOM was the first proper English crust band I got into. I bought their "Weakness" Ep at a Severed Head Of State gig in Paris in 2002 (that same night I also got Hellksrusher's "Doomsday hour"). I actually hesitated befor buying it on that German distro (SHOS played with Protest Stagnation that night hence a huge distro full of Skuld Releases records) because the Ep looked quite different from I was used to. I was heavily getting into anarchopunk at the time, bands like Disaffect, Substandard, Coitus or classics like Icons of Filth or the almighty Antisect. I felt visually that there was a connection but still it looked darker, gloomier but not cheesy in the way that actual metal bands looked to me. Seeing they were from Manchester (that data reassuring me about the potential quality of the band for some reason), I took the plunge... 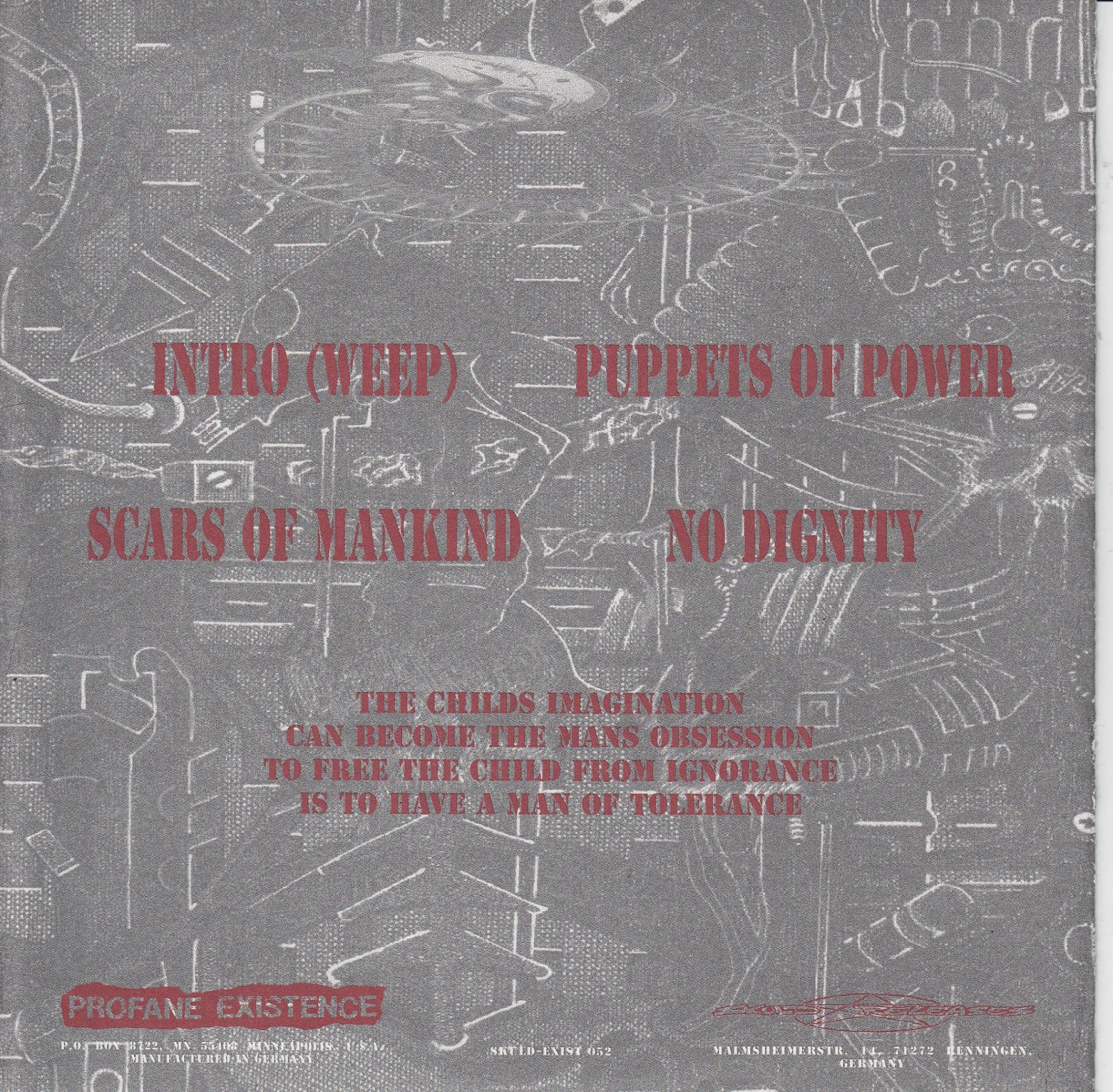 Twelve years later, I am still listening to EOM and still wondering why people in my corner of the punk world are not as much into them as I am (you can substitute EOM with any of the bands invited to my aforementioned table)... After all, they are the real legacy of Antisect. They don't try to emulate them as much as SDS though, rather, in the 90's, EOM merged both periods of Antisect to create their own sonic landscape. However, I don't think that, had Antisect gone on playing, they would have actually sounded like EOM. In fact, I am pretty sure that, given the clues we have with Kulturo, they wouldn't have landed too far from Coitus, with a more rocking sound. It's a pretty pointless argument I suppose but I'd be lying to say that it doesn't cross my mind from time to time. 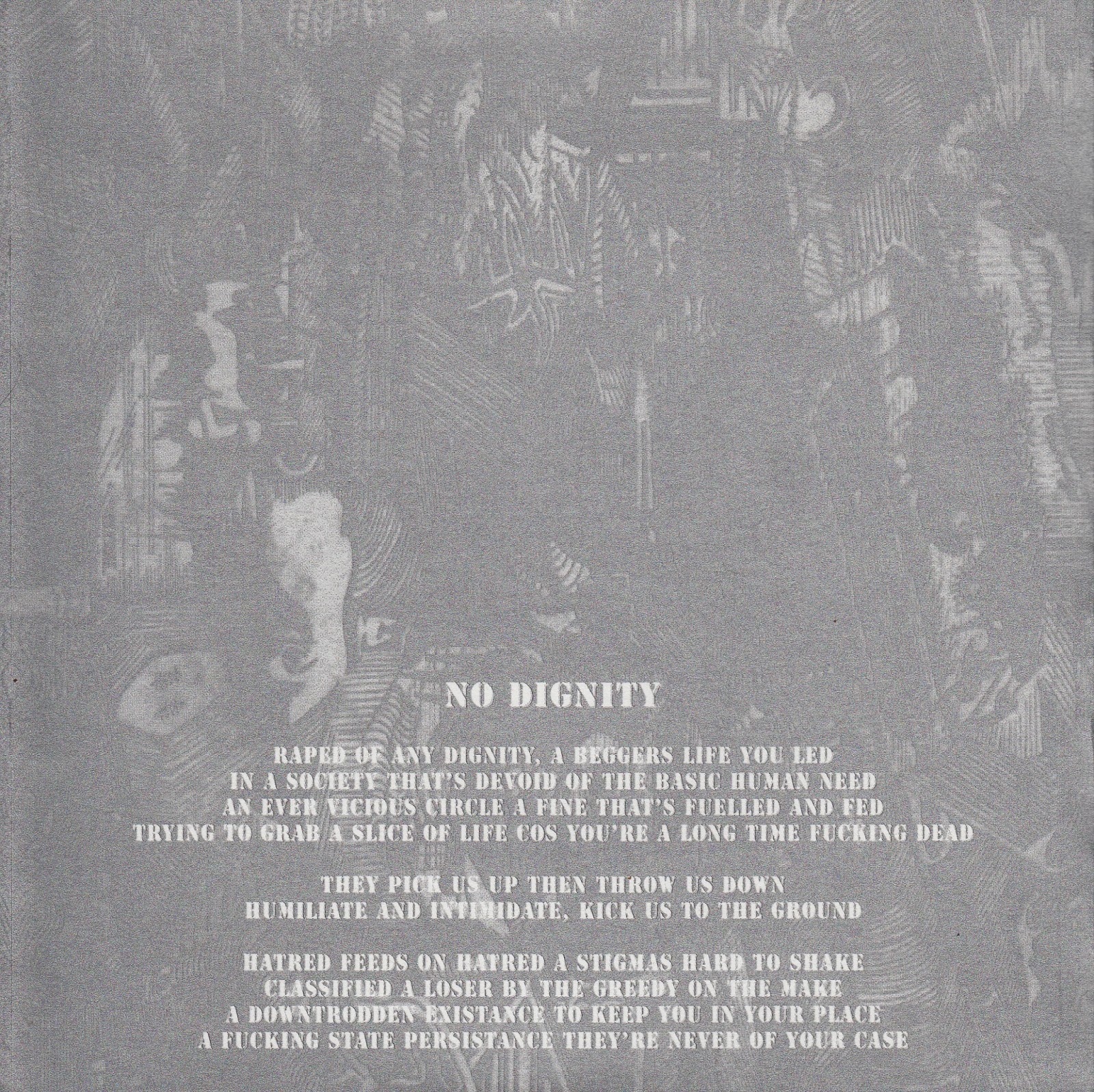 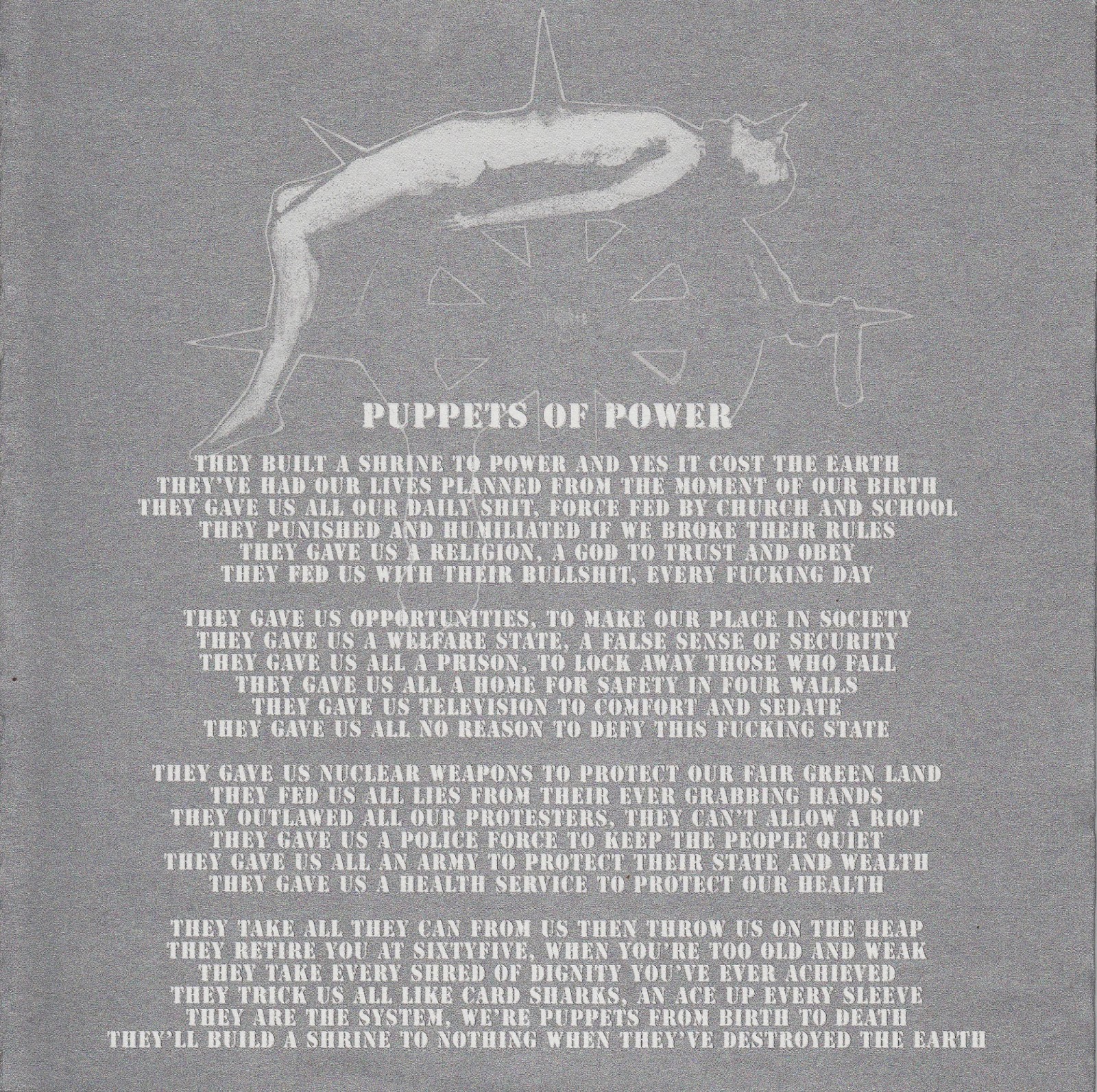 There are two distinct periods to EOM that can be circumscribed to two different line-ups and a change of drummer and guitarist that occured just after the release of the Ep we are going to talk about, a record that therefore can be seen as the apex of EOM's first life, with Foz and Mass still in the band, before Tony and Scoot joined in. I really enjoy both periods of the band but the changes in terms of sound are undeniable. On "Scars of mankind", the drumming is still ripe with drum rolls and tempo changes that, to me, defined the early EOM, while afterwards it became more metal in the traditional sense of the word, harder-hitting probably, more accurate certainly, but further from the original crust bands. The evolution in the guitar is the second great change, with Mass having a dark and dirty, gloomy, slimy, at times quite intricate style and Scoot with a more powerful, crunchier, thicker sound. 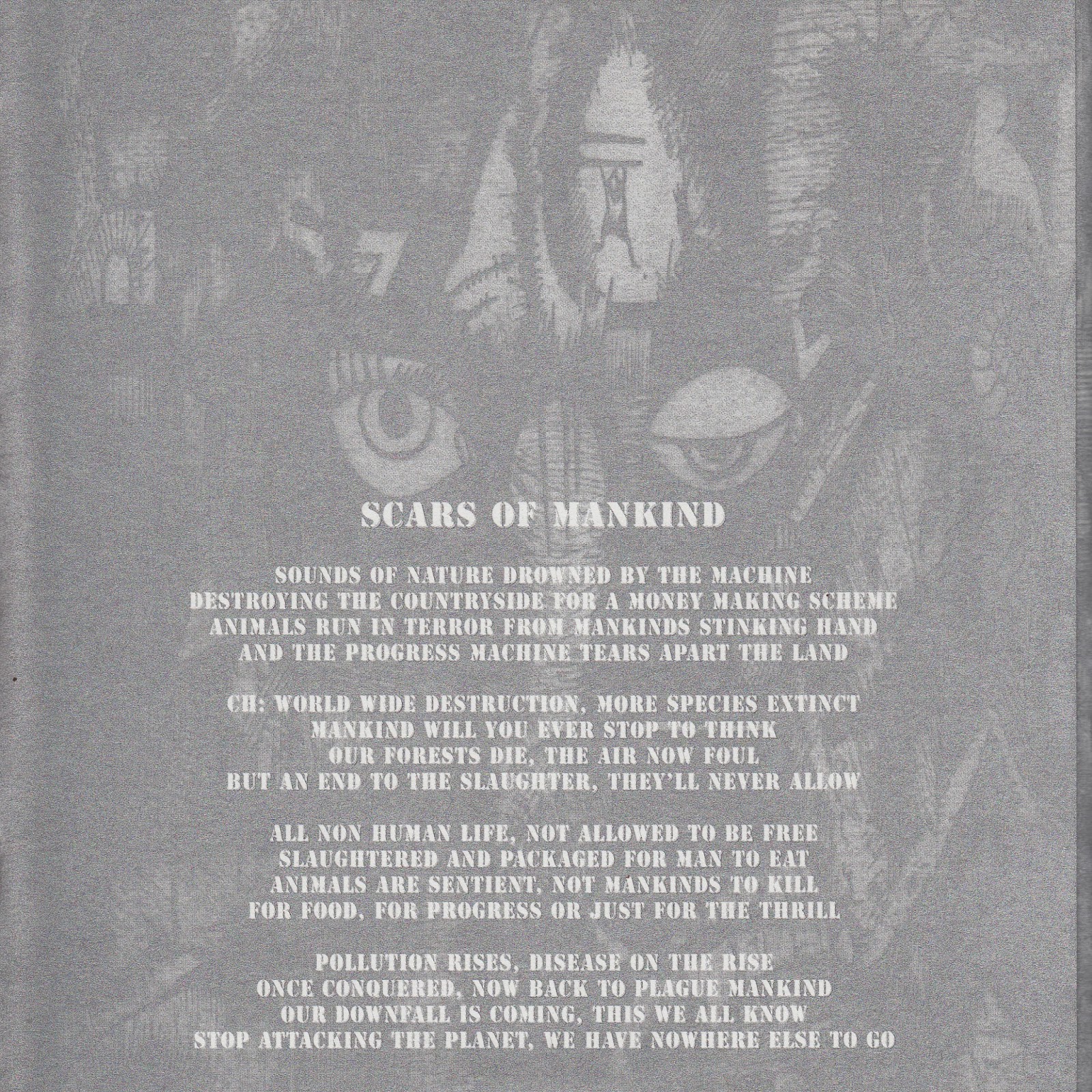 Undeniably, "Scars of mankind' is EOM's best 90's record. The songwriting is solid, the sound is better than on the first Lp but remains organic and damp (a bit like an Alien egg), the guitar is haunting and threatening, the distorted bass buzzes, the drumming is also more focused and powerful than previously and well, the vocals are as great as ever, with a singer that doesn't try to growl but on the contrary uses his actual - deep and powerful to say the least - voice, something that is often missing in that genre and that's a bloody shame, because that particular singing style is one of the things that makes EOM instantly recognizable and, well, unique. The perfect blend of Antisect and Nausea with a dash of Chaotic End? I'll drink to that. 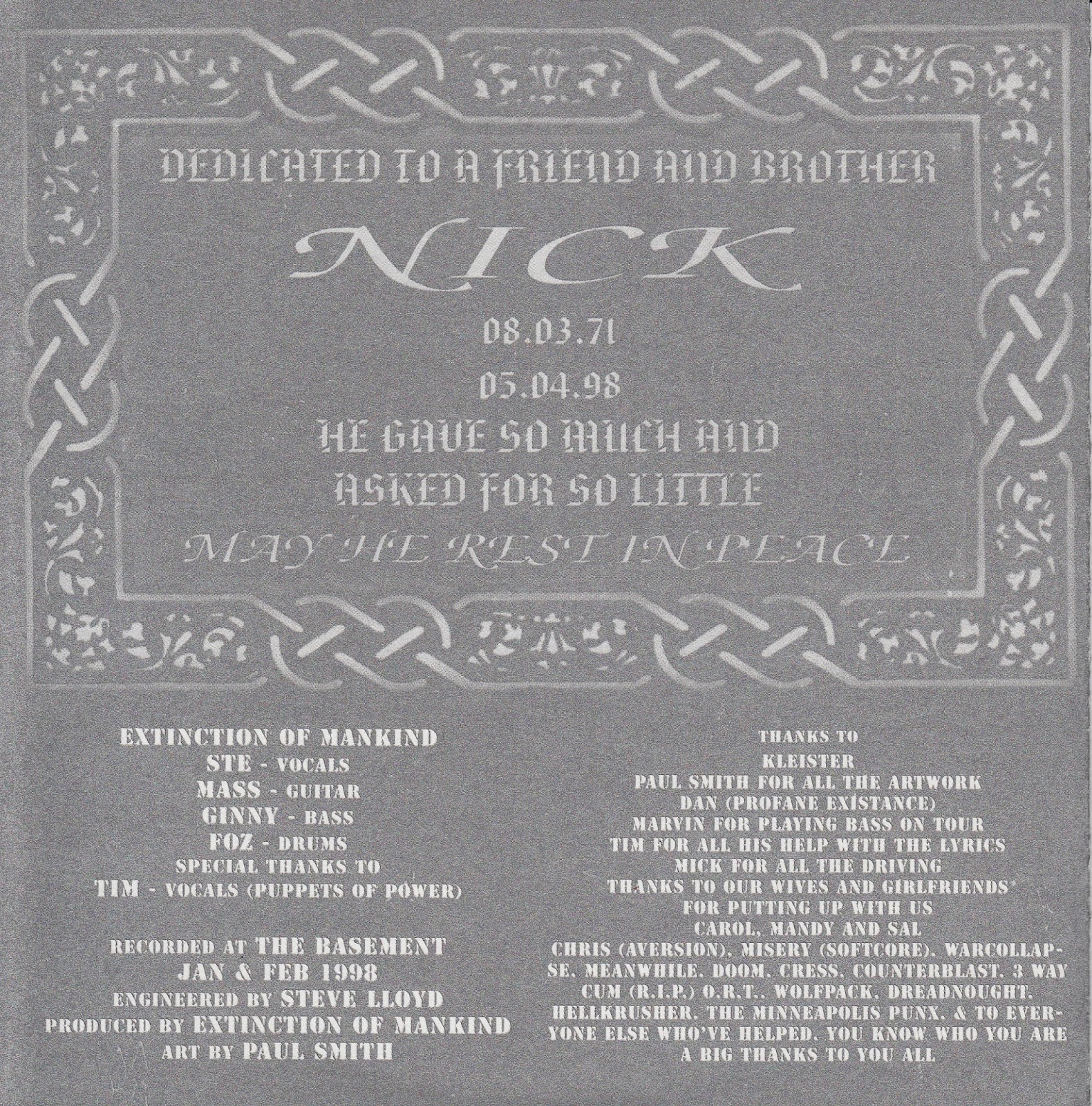 The artwork is stunning although I am afraid my shitty scans don't do justice to the drawings here. They are actually dark, by which I mean that they convey a sense of doom, of anguish, of fear and alienation and the Alien motif is just the perfect metaphor of the threatening unknown that is both inside and outside the human body and mind. And it shows that you don't need to use fucking orcs and nuclear explosions all the time. The lyrics are on a par with the great songwriting too: "No dignity" depicting the pitiful, lifeless existence that we are offered by the bleak wasteland that we call society; "Puppets of power" is about power and how we are sedated, conditioned to accept our lot from the cradle to the grave (this is one of the best EOM song ever, a crushing, nightmarish mid-tempo number with an additional singer, a real classic); finally "Scars of mankind" is about human destruction and disrespect of the environment and the natural world. 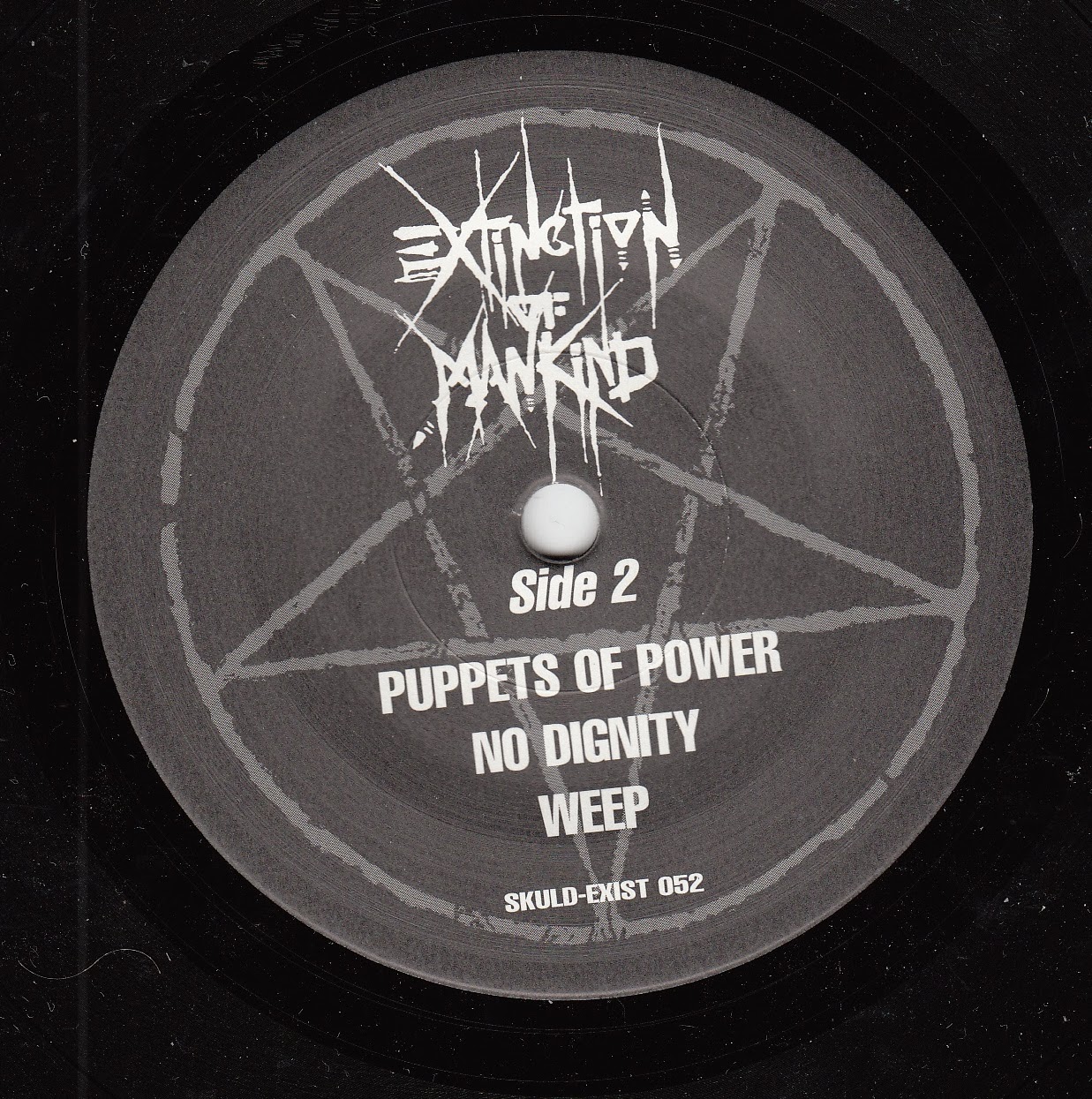 This Ep was a joint release between Profane Existence and Skuld Releases and it is a record that I have seen floating in distros even recently. So you'd better get it before the 90's become officially trendy. The next EOM record would be the split Lp with Misery which is, for me, a tragic missed opportunity. A collaboration between the two bands that epitomised crust music (and I mean CRUST music) the best should have been the ultimate record, some sort of new classic. Sadly, because of a terrible production, the EOM side sounds weak and even sloppy. So, I think, and I am pretty sure that it is the best idea I have had for a long time, that both bands, especially now that they are both at the top of their game again, should do another split record together, with a proper sound for both this time. How great would that be?

Scars of mankind still fucking weep
f
Posted by The Earslaughterers at 21:39