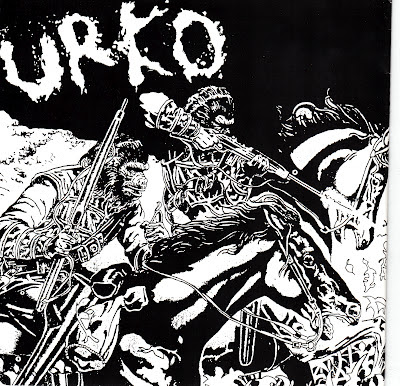 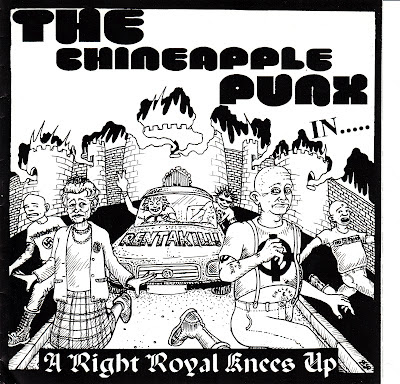 I like split Ep's. I think they are a great format, especially when the two bands don't sound alike but share a common punk spirit. This record is fine example of what a good split should be about. This was Inflammable Material's fifth release and in fact I don't think this label has ever put out one bad record. Although none of the two bands included here, Urko and Chineapple Punx, marked the history of punk-rock on a global scale, they certainly illustrate the variety of the 90's British punk scene and show that musical differences don't really matter. In the end, it's all good punk-rock.

Urko were from Boston (UK not US) a city that has had a couple of great bands and zines throughout the years. They actually did a couple of other very good records and morphed into a ragingly fast and angry hardcore outfit in their later years (powerviolence anyone?). This was their first record and possibly their crustier-sounding offering too. In "Armed with anger" the band says that they were originally influenced by Deathside, Swedish crust (think Tolshock, Scumbrigade, Skitsystem) and mid-90's Doom, so you are probably already getting an idea. To my ears however, the four tracks on this Ep are more reminiscent of Disrupt and Deformed Conscience as it has that 90's US crust sound. Ian Glasper suggests Septic Death as another point of comparison and I see what he means too. Anyway, this is fast, very pissed off, crusty hardcore-punk with two singers. The songs are short and quite hectic, not quite as heavy as full-on caveman crust but still heavier than the fast hardcore bands. The sound is pretty raw which gives the songs a real punk taste, something that the nasty, angry and confrontational lyrics but confirm. "Seven ways to die" (my fave) describes seven different methods of death penalties and it adequately reflects not only how horrible death penalty but also how vicious and cruel the people who administer it are. "Fuck your shit" is about prejudices against people who look "different". "Deadstock" is an attack against the new Woodstock festival and how it is just a bloody rip-off and "Consuming apathetics" points out the consumerism and materialism of modern society and how we "seem to occupy our days thinking of the goods that we can't afford to pay . Thinking of the lifestyle that we'll never ever need. Craving new commodities our balance cannot feed". Clever stuff and I can't agree more with that. Urko is the name of a general ape in "Planet of the apes" and a lot of the band's artwork toys with, well, mean-looking apes taking over human society. It must have had something to do with Boston as a brilliant zine of the town, Gadgie, was also obsessed with our hairy enemies. 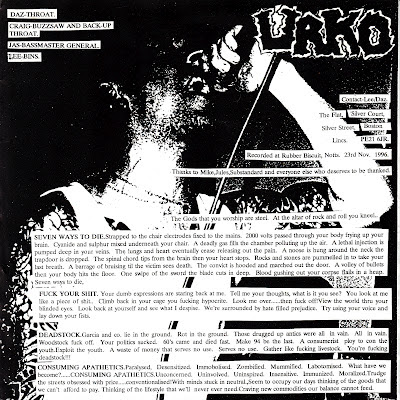 Chineapple Punx were a much more old-school punk-rock affair who combined fun, good politics and vintage bouncy punk music. The Punx seemed to have that cheeky sense of humour typical of many British punk bands. They weren't quite ass silly as the Toy Dolls, as crazy as Doctor and the Crippens or as obnoxious as Peter and the Test Tube Babies, but the drawing of the Queen litterally shitting boneheads in her palace might give you a clue as where the laughs lie. Anyway, the band offers two songs. The first one, "Braindead" is of a mid-tempo nature, almost oi influenced really, somewhere between the Test Tubes, Uk Subs and Zero Tolerance. The second one is faster and has a Subhumans feel to it. I have to say the songs are rather lo-fi as the guitar is low in the mix but they still work thanks to added snot and tunes in the vocals that I really enjoy. The cover on Chineapple's side reflects the topics of these two songs: boneheads and aristocrats. "Braindead" is depicts how stupid and thick nazi skinheads are and I confess the line "I don't know which is uglier, your dog's arse or your face" had me laugh. "Parasite" is a priceless song encouraging to burn down the royal family's homes, also known as the parasites' nest, the Punx posing here as Rentokill employees. 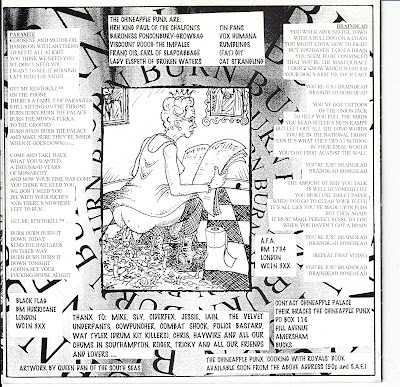 
Urko / Chineapple Punx split Ep
Posted by The Earslaughterers at 16:29