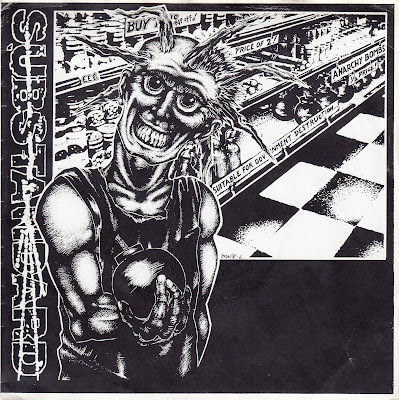 I got this record for a mere 2 euros a couple of years ago. It seems the distro had had it for years and basically wanted to get rid of it. Now, record collectors are an odd bunch. They can spend insane amounts of money on any trendy Japanese or Scandinavian band that have nothing of interest to say and purposely play derivative and referential music, and yet they can completely ignore and discard a cracking record like this one. Oh well, that's more good punk-rock for me I suppose. 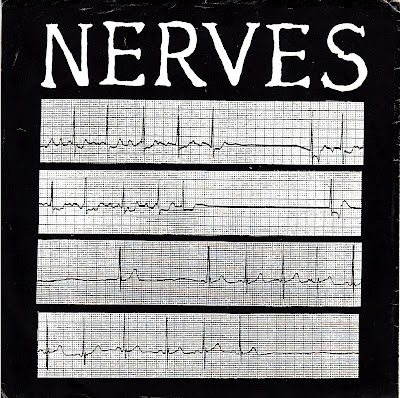 This split is just furious and, for lack of a more civilised term, punk as fuck. Be warned though: it's not the "punk as fuck" from fancy "raw punk" or "noisepunk" I am talking about, with all their cheesy bullet belts, studs, flatly overdone distorsions and corny references to Chaos UK/Confuse/Disorder/whatever band MRR is suddenly into now. Here we have six songs of genuinely pissed off punk-rock, Substandard being fast and whirlwind-like, while Nerves relie more on tunefulness and catchy, but still beefy, punk-rock riffs. This Ep was released on Inflammable Material, a label created by Substandard's singer, Jules and Mike from Decadent Few (another overlooked band if there is one) that would go on to offer the world other great records of Coitus, Urko, Kuru, and in later years Constant State of Terror and Permaculture. 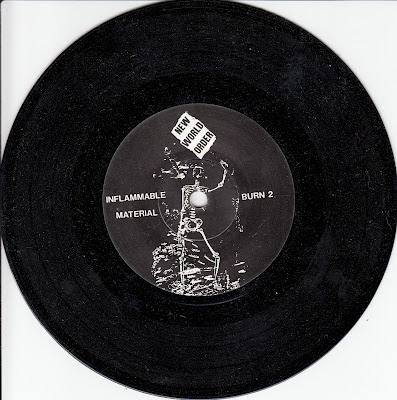 Despite many worthy competitors, Substandard could very well be the most underrated British hardcore-punk band ever. In fact, I have just seen that the excellent German distro and label Ruin Nation, that had issued the Substandard discography in the first place, is offering aforementioned Lp for 5 euros. Anyway, enough bitterness already. Substandard were an anarchopunk band from Nottingham who were active throughout the 90's. This is actually both bands' first vinyl appearance and it is an impressive first time indeed. Substandard played fast and powerful harcore-punk influenced by Antisect, Anti-System, AOA, some Conflict and One Way System as well. The band had two different singers, just like Antisect and Anti-System (actually the arrangement of the vocals is not dissimilar to the first side of "Peace is better than a place in history" and Dirge or Insurrection), one with a lower voice, the other snottier and higher-pitched and they perfectly complement each other, especially with the inclusion of spoken parts. The fury unleashed in Substandard's three songs is just unbelievable, the pace is frantic and pummelling, there are some great guitar leads, the sound is raw but powerful and the whole band sound like they are on the edge of rioting. And more importantly, there is a definite Substandard sound, in the sense that you can't possibly confuse them with another band. Even though you can identify the bands they love, they manage to create a sound of their own. Lyrically, this is as angry as you can get. The first song "Rostock" was actually written by Bjorn from Recharge and the Losers (more on the latter in the next post) and deal with the series of criminal fires that targeted immigrants' homes in Germany, notably in Rostock (French band Heyoka also had a song about those tragic events); then "Discount" is about shopping at Aldi and eating shitty food because you can't afford any better (the title is actually a pisstake out of some of the most unoriginal d-beat bands like Disgust); finally, "Two nations - Panic stations" is a spit at the face of the Criminal Justice Bill that was aimed at political activists and implemented heavier prison sentences and overall repression. Three songs and five minutes of unadulterated rage. 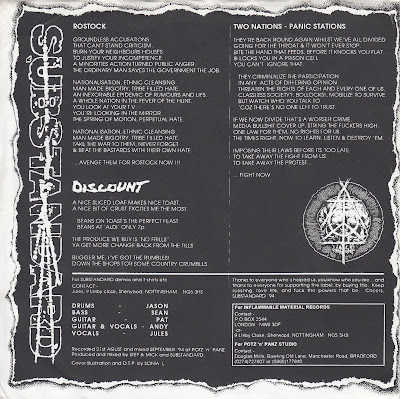 On the flipside, you have Nerves from Leicester, a town that also gave birth to the excellent Sarcasm and Wankys. From what I read in "Armed with anger" (both bands are interviewed in it), Nerves are supposed to sound like the New Bomb Turks and to be fair, I don't really know the NBT so I cannot really comment on the comparison. To my ears, Nerves played punchy and catchy punk-rock with great chorus. The rythmic section is mostly in the "fast" position, the sound is rather clear but keeps a raw edge that enhances the intensity of the songs. I really like the vocal delivery as well, angry-sounding but with some tunes you can sing along to. Though, Nerves are nothing really special in terms of originality and musicianship, they effortlessly achieve to pen three simple, powerful and anthemic punk-songs (they actually remind me a little of early Broken for that). Take some vintage UK bands like the English Dogs, Picture Frame Seduction or Abrasive Wheels, add some Poison Idea for the extra heaviness and some Slum Gang for the great tunes and you'll get an idea. Nevres did another Ep but unfortunately, it wasn't as effective as this one. Oh well, beginners' luck maybe? On the lyrical front, Nerves sing about not being able to handle the pressure of life (alcohol anyone?), people with oppressive egos and fake punks. 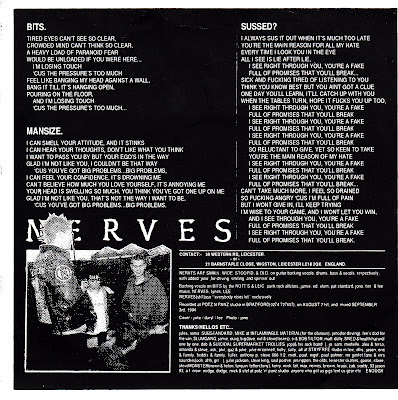 So if you happen to see this record in a two euro bin, please, do the right thing.


Substandard vs Nerves
Posted by The Earslaughterers at 19:14