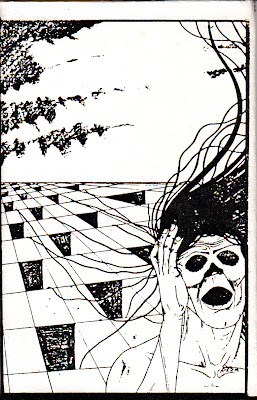 I am not going lie: I used to absolutely hate the Astronauts. I thought they were just ridiculous and fell under the terrifying category of "non-punk bands". But then, we didn't really meet under the best circumstances.

In 2003, I spent a year in Manchester where I got introduced to the marvellous world of crust-punk music. I had heard of a band called Hellbastard and I soon became obsessed with finding one of their records so that I could at last listen to them. I found the website of "Acid Stings", a label that had actually put out a Hellbastard cd subtly entitled "In grind we crust". So I wrote the label an email to see if they still had it. Two months after (or something equally ridiculous by today's standards), I finally got a reply and I ordered the cd. When I received the parcel, I noticed that there was a tape accompanying the Hellbastard cd. A tape of an unknown band called "The Astronauts".

Needless to say that I overplayed the Hellbastard cd, carefully skipping the "Natural order"'s songs though, and that my obsession with UK crust was only increased by the record. So when I played the Astronauts for the first time, I was appalled. I thought it was absolute rubbish compared to the filthy and heavy sound of Hellbastard (getting both at the same time, I couldn't really help comparing them). I mean, THERE WAS NO DRUMMER!!!! What kind of punk band doesn't have a drummer?? I was almost outraged and quickly proceeded to confine the Astronauts' tape to the "shitty music I don't care about" realms.

Years later, La Vida Es Un Mus reissued the Astronauts' Lp, a name until then tied with the notion of musical nightmare. But I gave them another shot and I found myself liking the music. It must have been because by that time I had listened to a lot of early anarchopunk bands who were keen on experimenting with music (Poison Girls, The Mob, Zounds, Apostles, Flowers in the Dustbin, Chumba, The Ex, Blyth Power...).

In fact, technically, this tape is not even a proper Astronauts' recording. The two songs "Getting things done" and "Still living in a car crash" were recorded in 1979 under the name Restricted Hours, who were the Astronauts under a different name, and were originally released as a split Ep with The Syndicate on RARecords, a label that also released an Ep by the fantastic Alien Kulture. The label Acid Stings, probably an Apostles-run label which also explains the Hellbastard connection (one of HB used to play in the Apostles as unbelievable as this might sound), reissued the two songs on tape along with two other songs recorded in 1980, a live version of "Protest song" and the brilliant "Moderation is boring". 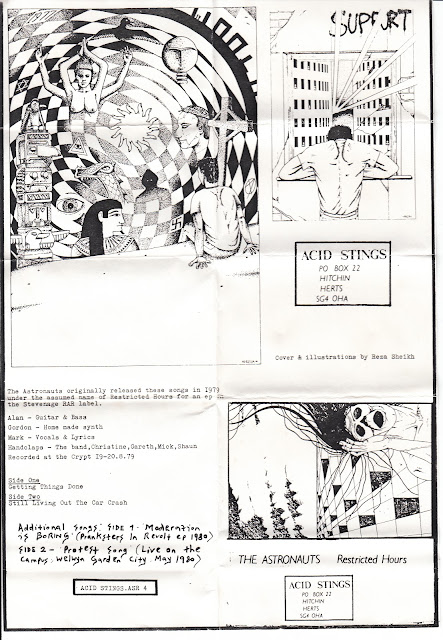 As you can see, the artwork is really beautiful and illustrates the psychedelic nature of the Astronauts. Musically, they are certainly hard to pinpoint, but experimental music of an acid-fuelled, psychedelic nature (you know, Hawkwind and all that) blended with some mid-tempo punk-rock and an anarcho perspective might be close. I must admit that I don't know many bands in the punk world who sound like them though it can be said that some bands had the same kind of ideas and drive to make unique and different music. The lyrics are smart as well and you can understand what's the singer is on about without too much effort, which is a nice change from the usual racket.

I eventually got to see the reformed Astronauts a few months ago and I really enjoyed the music live, probably more so than on records (funnily enough, it is the exact opposite with Hellbastard) so give it a try, especially if you are on shrooms.


Astronauts!
Posted by The Earslaughterers at 17:41