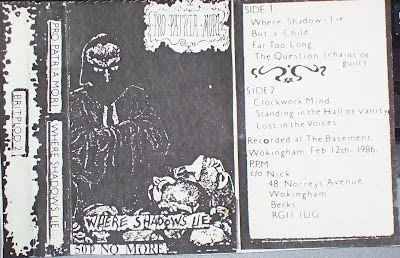 Pro Patria Mori, meaning "to die for your country", formed in Wokingham, Southeast of England in 1984. Though they never released any proper records, they still recorded two demos of which "Where shadows lie" is the second and this is just unbelievably good. In fact, and I am not even exaggerating here, I had two reactions the first time I heard this tape: I couldn't believe how good it was and I was angry that no one had told me about this band before and how good it was.

Being a huge sucker for the British anarcho punk sound, I can say without hesitation that this demo is a jewel and would have deserved the record treatment. While the political lyrics (from what I can understand) and the overall atmosphere of the songs are distinctively rooted in the anarcho tradition (you'll find haunting spoken words and dual vocals), the atmosphere of the songs is much darker and gloomier than the first wave of anarcho bands, an impression reinforced by the cover depicting a part-wizzard, part-judge dodgy-looking geezer staring at skulls and screaming heads. This imagery is also paralled by a great, dirty metal influence typical of mid-late 80's UK bands. But if metal was indeed influential here, the anger and rage are firmly ensconsed in pissed-off punk tradition (you probably won't be disappointed to hear that Odin, the hammer of Thor or black magics aren't on the Pro Patria Mori programm). The guitar sound is aggressive and mean, the dual vocals reminds me of an angrier, harsher version of Anti-System or Antisect's. The pace is fast with heavy mid-tempo parts. Awesome stuff to be sure, strongly reminiscent of the mighty Antisect, Anti-System, AOA or mid-late 80's Oi Polloi, with a bit of Concrete Sox and Anihilated for the riffage. Yes, it really is that good.

It is a shame that these brilliant songs haven't made it to vinyl (yet? If one is to believe their interview in the excellent book "Trapped in a scene", in which Pro Patria Mori has a section, the demo might hopefully be reissued at some point).

Where Pro Patria Mori lie
Posted by The Earslaughterers at 15:42