Books. Yes, books. More often than not, you can read alarming reports claiming that "the youth of today" no longer read, that the whole book industry and its physical outputs are therefore condemned to collapse and that tomorrow's teenagers won't be able to know Virginia Woolf from Billie Eilish (I have been told she's very famous on Instagram but am absolutely clueless as to what she actually does for a living) and will think Dickens is just a category of dick pic. It would also necessarily entail that the whole publishing industry might become useless which will send a significant portion of the middle-class to the job centre and may even force some of them into selling their second homes in Italy. A dire prospect indeed but let's pray that it won't come to such extremities.

Nothing says "things were better in my days" quite like this sort of doomful predictions. I suppose such "kids these days" theories often formulated by pub oracles have always existed and I would not be surprised to read that Mozart in his time was blamed by the old guards (also known as professional twats) for betraying his roots and cater for a new generation that can't be arsed to love proper music. So while I believe that we should not be stupidly optimistic about the state of things and remain critical and alert about social evolutions, notably when alternative cultures are concerned, there is no point in moaning about how the youth of today supposedly do everything wrong and let's not forget that, in spite of our bad backs, poor eyesights and receding hairlines currently plaguing our daily lives, we all used to be them. Let's get real, this not a reason to pretend to enjoy Turnstile, even ironically. It won't make you 16 again and do you really want to spend a whole gig holding up your phone in the air? Fuck no, the proper way to enjoy a punk gig is to quietly nod and tap your feet to a random d-beat band and sing along to the Discharge covers.

But yes, books. I read that a thing called BookTok might be able to save the industry so I checked the wikipedia page (yes, it has one). It is pretty sad that it takes a ruthless capitalist company that promotes "online content consumption" (how sad is that concept) to get younger people to read and from what I gather the most popular genre is "young adult literature", whatever that is (is there an old adult literature? Or a middle-aged adult one?). But let's not be smug or feel aggrieved, after all reading Madeline Miller might lead some to get into real authors like Wayne Rooney or myself - by the way my autobiography, entitled In Smartness There is No Choice, will soon hit the shelves but sadly I am apparently too old to join the BookToker community.

Why am I boring you with such tedious, cloying digressions. Well, I actually first heard of Vitriolic Response through Ian Glasper's The Scene that Would Not Die that was published two years ago. I have always loved his writing and I cannot stress enough how inspiring and educational his comprehensive books about 80's and 90's UK punk have been for me. Would have I shamelessly bought an Antisect blanket out of subcultural pride without him? Probably not. His latter book about British punk tackled the last two decades and, as he said in the introduction, it had to be a very tricky endeavour that was bound to generate undeservedly harsh criticism, cynicism, snobbishness and the usual negativity that has always been plaguing punk. I am surprised that the armchair critics did not coalesce into a mob to protest again the book. That's a lot of energy wasted they could, and should, have been put into, and this is just a random example, writing their own articles about the bands they feel have been left out instead of posting bitter comments. There are bands that I don't necessarily like or even care about in the book but the amount of work and heart put into it is, as always with the man, impressive and worthy. 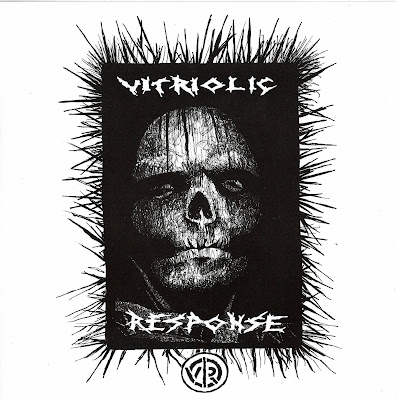 If anything, I am actually grateful for The Scene that Would Not Die because it brought a good band to my attention, Vitriolic Response. I don't want to be discourteous but I had never heard of them before and the pleasure I felt when I read the article about them was genuine as it reminded of the time when punk fanzines or even former Glasper's books were a great source to get into new bands, a process that has been severely undermined by social media. On the other hand, I was a little upset too. How could an English band claiming to play old-school metallic crust slip under my radar? Maybe the mojo is gone and I should accept this position as a part-time reiki consultant that my stepsister told me about after all.

So what about the band then? The Manchester-based Vitriolic Response (admittedly a bit of a mouthful of a name) started out in 2012 and its early lineup was made up of people who had all been involved in quite a few bands before: drummer D-Fekt was in the great Kismet HC, guitar hero Rob in Raised by Drunks and briefly in Spite, vocalist Rob in Burn All Flags and Anxiety Attack (among others) and bass player Flek in Poundaflesh and Declaration of War. Not exactly rookies. A first recording session resulted in five songs landing on an Ep entitled Follow the Herd in 2013 and four on a split Ep with System Shit in 2014 which is the record I am interested on this sunny Monday. 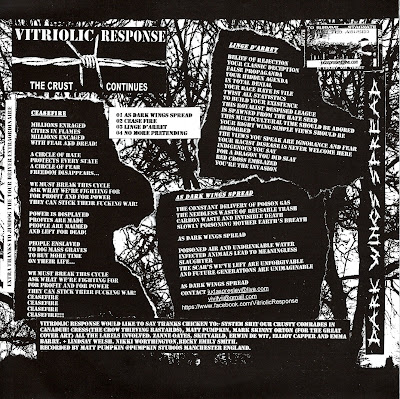 To expect some sort of modern post-00's stenchcore sound would be a mistake asVR have a distinct UK 90's metallic hardcore punk feel on this record pervaded with strong old-school crust influences. I particularly enjoy the very direct punk-sounding production here which contrasts with the superheavy down-tuned sound of many contemporary bands in the crust game. Oddly - given the template - VR sound fresh. The vocals clearly point to 90's spiky hardcore and I would describe the crusty metal crusher mosh as punk-oriented (in an Extinction of Mankind-meet-Misery-in-1995 kind of way) rather than Bolt Thrower-worshipping. As hinted above, mid-90's Extinction of Mankind is the most relevant comparison in terms of apocalyptic metallic punk and VR's songwriting (especially their eery introduction and the nasty mid-paced moments) certainly owes a lot to the iconic local band. But as I pointed out, VR can also be seen as that hard-hitting political UK punk unit especially reminiscent of the mighty Substandard and Constant State of Terror and even bands like Fleas and Lice or Aus-Rotten can be brought to the table. This sounds effortlessly old-school and I am not saying that because the participants are old experienced. The one thing bugging me about the songs is the song title "Linge d'arret" which literally means "Laundry line" in French. Did they mean "Ligne d'arrêt" which translates as "Stop line"? I mean, what kind of punks even do the laundry anyway?

VR then changed drummer with the arrival of Will from Warcoma and a second guitar player, Jay, also joined. Songs were recorded in 2015 for a split 10'' but the project unfortunately did not materialize. A further lineup change was needed and Keith and Beanhead replaced Will and Jay. The songs recorded for the aforementioned 10'' were finally released on a split cd with Chain of Dissent and let me tell you that they are brilliant, a bit more elaborate and well worth the attention of crust-lovers. 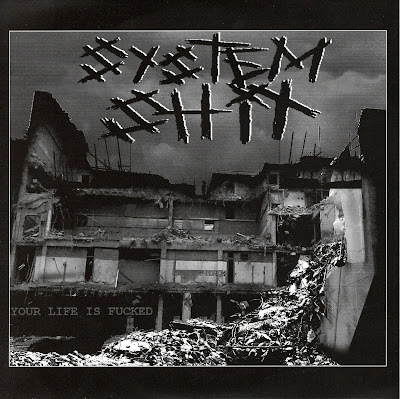 On the other side of the Ep are System Shit. This Halifax lot are like a school mate that you like and regularly bump into but don't actually know that much about and never really phone although he appears on quite a few pictures with you and it feels like he has always been around (but not on a creepy way). SS have been going since 1988 which is a respectable feat and if you are into crust or grindcore, you are more than likely to own a SS record or at least a compilation with them on it. A bit like an ugly jumper that an aunt got you at some point. It is definitely there. The songs that the band contributed to this split are absolutely crushing, old-school protest grinding crustcore or crusty grindcore (depending on your musical sensibilities) with a punk attitude at its best. Vintage Disrupt, Destroy! and Extreme Noise Error, or Massgrave for a more recent parallel, are useful tools if you need to build SS songs according to the instruction manual. 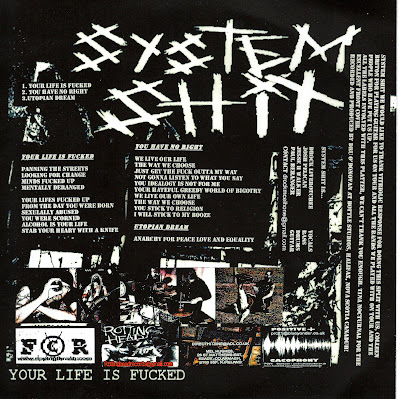 This cannot be said to be a classic record but one that fans of genuine and honest crust punk are bound to really enjoy. This was released on FCR, Rotting Head Records, Direct Hit Records and Positive Cacophony. Maybe I should try to CrustTok this shit. 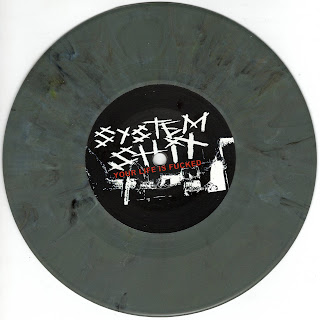 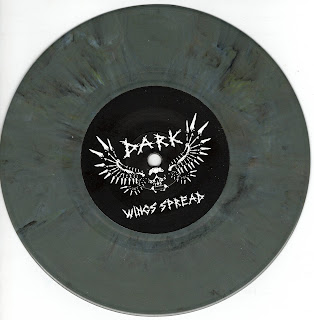 Posted by The Earslaughterers at 16:15