Germany has always been a bit of an enigma for me. I am not just talking about the success of Rawside or some of the transcendentally cheesy haircuts that many famous athletes wore well into the late 90's. By any standards, Germany has the best network of alternative punk venues anywhere in the world. Even smaller towns have their own autonomous centers provided with cheap rents, actual stages, sound systems and bars (and pissed punters of course). And I won't even get into Berlin's Hausprojekte or Leipzig's insane concentration of alternative spaces hosting gigs and political activities. If Leipzig was turned into abs, it would be Cristiano Ronaldo's: rock-hard. Obviously German towns, especially the ones mentioned above but also Hamburg or Bremen and others (not including München, who would like to live in a golden right-wing magnet?) attract large numbers of foreign punks looking for cheap places to live and great punk action. Some Berlin gigs don't have any actual German-born punks and it does not even affect lager sales. No wonder punks from all around the world move over there instead of Paris where it is horribly expensive, dirty and where punk gigs take place in shitty bars selling stale beers run by landlords who don't give a damn about any music, let alone punk. If you asked the twats, you could just as well be putting on Drungeon and Dragon events as long as the nerds get drinks (arguably people don't really get pissed when playing the game but what do I know). At least, I presume they won't take speed in the bogs. 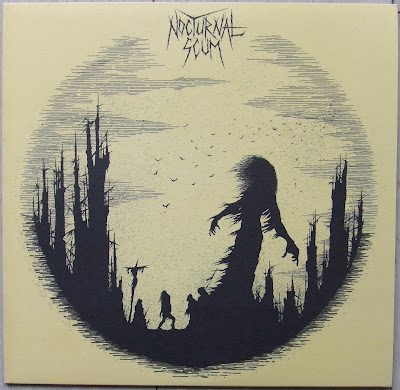 As a result, because of the amazing venues (sometimes getting subsidies to pay the bands, even shit ones like mines) and hordes of punks living there it is little wonder that touring bands often favour Germany. More often than not what is called "European tour" is basically six gigs out of twelve in Germany, two in Switzerland and sometimes one in glamorous Paris, but that's pretty much because we have selfie-friendly spots and we are on the way toward Barcelona and other much cooler places. This combination of ace spaces, punks from all over the place and countless bands touring should create dozens upon dozens of amazing local bands that should be able to export themselves. You would expect Berlin to be looking down on Portland and put Sweden to shame. Making Paris look like a kindergarten is not nearly enough Berlin.

In fact, I cannot think of that many remarkable German bands in the field of d-beat/crust in the 00's and 10's. Perhaps most of the good shit remained local and did not reach the shores of Terminal Sound Nuisance but one would logically expect to be overrun with great bands. Even street musicians should be doing covers of Amebix and Anti-Cimex and not abominable covers of "Bella ciao" or, even worse, Manu fucking Chao. I am not claiming that there have not been good bands in those decades (Instinct of Survival are undeniably one of the best crust bands ever and I can think of a couple of genuinely enjoyable other acts), just that there have not been many considering the ratio of punks that are into crust and d-beat raw punk over there. I mean, there are more studs at German punk gigs than there are in Earth's sex dungeons. Are they just too busy looking good or too spoiled with great music to bother? Are Berlin punks just lazy bums? Am I just a shameless ignoramus? Will they retaliate against me? To crust or not to crust? 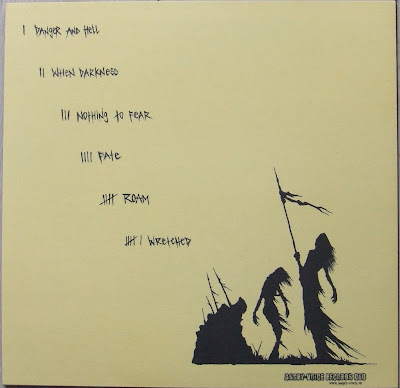 But anyway. Whenever I hear about a solid crust band from these parts, I therefore get very curious, not to mention relieved, because of the potential, and it seems only fair to include a Berlin band in the Live by the Crust, Die by the Crust series, a motto that is probably tattooed on many a punk's arse in that very peculiar town. Enter Nocturnal Scum. Something of an odd choice for a name, not that I dislike it and "scum" is after all not an unusual substantive in a punk band's name (see Scum Noise, Scum of Society, Scumbrigade or Scum System Kill), but there was - and still is - already a crust band called Moribund Scum around so that it makes one feel there is a lot of scum in Germany. It is not like they were in a Highlander movie and there could only be one crust scum around I guess. There was room for two types of scum, the nocturnal and the moribund. That's diversity after all. 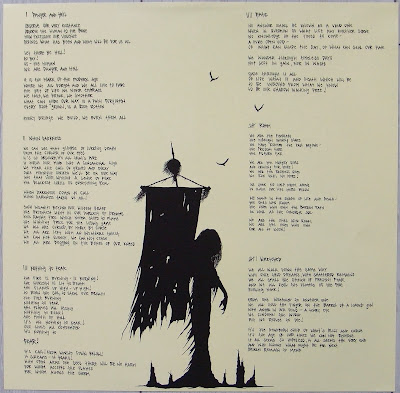 NS formed in 2015 and, as is often the case, it was not a first attempt at punk music for the members. Singer Katrien used to growl in the well-respected second stenchcore revival band Last Legion Alive, Isa and Janse played in Chorea Huntington and the very good Kriminal, Lassi also played in Kriminal and Gitshi was part of Katyusha, a local metal crust band, in the early 2010's. Back when they were still active (they stopped playing around 2018), NS was often referred to as "that band with Last Legion Alive's singer" and by "often referred to" I mean that I might have read it twice on the internet, one of which was actually my own doing. The connection cannot be said to be unintelligible. After all Katrien's vocals were particularly memorable in LLA, a well liked band in itself, and, without disrespect to the other worthy musicians, it makes sense that people mostly remember the band for her. 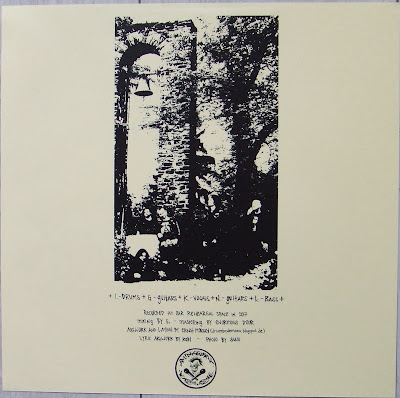 This being said, NS and LLA don't sound alike, the former being more energetic and not as doom-oriented. The sound is purposefully raw as the six songs were recorded in the band's practice space so that the recording has that primitive, wild, feral quality (I am reminded of the early so-called "proto" years of extreme metal) and what the music may lack in heaviness is largely compensated with the crude energy and furious drive permeating the record. In terms of style, NS are pretty pummeling and certainly love their fast and epic thrashing stenchcore balanced with headbanging mid-paced moments with double drum and some death-metal leads. Good shit. They are not reinventing the wheel and don't claim to be. They give the impression that they play crust for crust's sake and love doing it in a genuine way. I am heavily reminded of bands like Limb From Limb, early Krang and Fatum (definitely, post-2015). I like the fact that they rely on energy more than on their pedal boards or effects. The music has that very spontaneous vibe, it is basically very direct and unpretentious and, while it cannot be said to be a major crust work, it is one that can be easily recommended. Especially with Katrien's demented vocals, the actual elephant in the room. I cannot really think of a similar vocal style in crust music and the closest comparisons I can think of on a Tuesday afternoon in November is a cross between Order of the Vulture's mad and evil singer and Meg's gruff throaty vocals in Excrement of War. She hellishly barks, gnarls and growls her way through the songs and manages to sound threatening and very dynamic. If my very mean scary maths teacher had been possessed by evil, she would have sounded just like her. The vocals in NS are impressive even if you are not into crust music (although it does help). 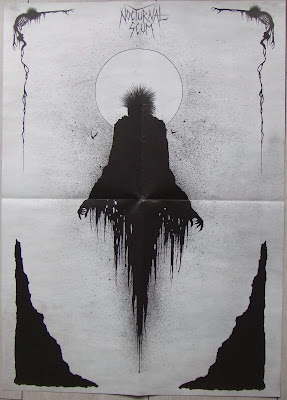 I don't think the band was still active when this 12'' Ep came out through Angry-Voice Records in 2018. The artwork is simple but evocative enough and I like its pagan Amebix-like eeriness. And there is even a poster included. That is so retro. I love it. After the demise of the band, some members formed Terminal Filth, a 100% satisfaction guaranteed stenchcore band that has been one my favourite punk records of 2022. And while you are it, give Electric Masochist a go if you are looking for an over-the-top howling crust-pants-fueled distorted d-beat band to play at around 4am at your aunt's New Year's Eve party.

Big thanks go to top geezer Martin for his help in the collection of information. Merci mec! 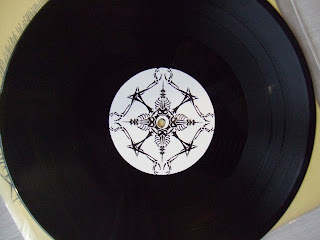 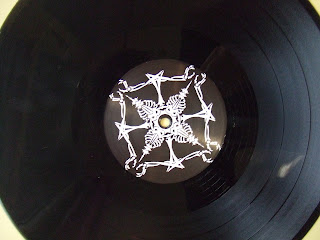 Posted by The Earslaughterers at 10:23