As I mentioned at the start of the series, selecting records that could, taken diachronically as a story and synchronically as a whole, give a sense of what Japanese crust was all about felt like something akin to a Herculean task. Not unlike the Hydra of Lerna, you pick one record and then another crucial one just pops up from your memory. It is bloody endless but cuts had to be made and top bands like Crocodile Skink, Guillotine Terror or Argue Damnation were eventually left out (but I will come back for you, I promise). The five year gap between SDS' "Ameber" and the present record does not imply that there was no significant Japanese crust record released between 1998 and 2003, but let's say that I wanted to write meaningfully about the noughties because it was a very rich decade on that level and I had to start somewhere. So there, Defector it is. 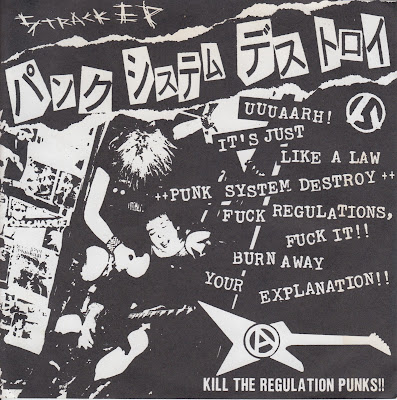 Writing about Osaka's Defector just a month after my extravagant ravings about Gloom might sound a little pointless, if not redundant, and I do think that the various hyperbolic mumbles that are to follow should be read while keeping in mind Gloom's creative perspective (if you are too lazy to do more than three clicks, meaning you were probably born after 1992, here it is). There are bands wishing they were judged on their own actual production rather than that of the members' former bands. But I do not think that Defector belongs to that category of bands since, beside having former Gloom people, the band kept building openly on their predecessor's legacy.

I first heard Defector in 2005. Of course, I had seen their name on distros but the "noize" tag kinda frightened me (even more so because it was written with a "z" instead of an "s", thus suggesting that it would be even noisier than that Gloom Lp or that Confuse live side I had so much trouble listening to... and can you really blame me?) and I did not really care to give them a shot. Until the summer of 2005 when I stayed in Dublin for a couple of weeks with my best mate. I have great memories of those crazy days but I guess this is not really the place and you will have to wait for my autobiography for details. We were staying at some friends' house in a neighbourhood called Phibsboro, where a good few punks lived. And painted on a derelict wall in the hood there was a slogan that I bloody enjoyed: "Punk system destroy". Of course, it was a tongue-in-cheek thing (you know, Irish humour and that) but I loved it. It sounded both silly and witty. So I asked where the slogan came from and learnt that it was the name of a Defector Ep, which was then promptly played at the house. I cannot say I liked it though because Defector's (noize not) music is not really one that you can really grasp fully when drinking and chatting with mates, but I still made a mental note that said, roughly, "it's alright that, a bit shambolic and fuzzy but I'll remember to give it a proper go". Truth be told, I really needed to understand Gloom first in order to get what Defector were up to but I eventually did, although it did take me a few years to achieve (but really, you just cannot focus on everything). 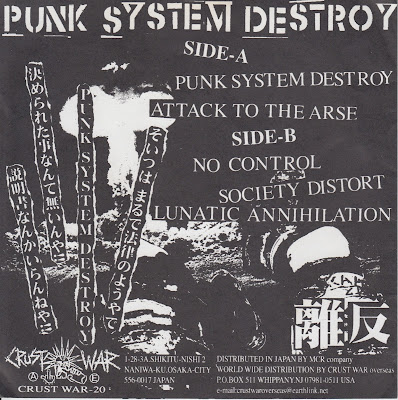 Defector formed after Gloom's final split (there were three of them apparently), following the release of "Mentally achronistic". The band had Jhonio on the bass and Habi on the drums (both of whom had always been in Gloom), Jorge on vocals and two guitar players, Taki (Gloom's first guitar player) and Toyo. The name "Defector" was itself taken from the 16-second Gloom song I love so much (from "Recomendation of perdition") and I suppose both bands can be said to play a similar genre. So that's a lot of Gloom in one single band. Do Defector sound like Gloom? Absolutely and definitely not. Although you do find the same structural basis, Defector were far more noise-oriented as the title of their first Ep, "Ultra noize violence" (there's a new subgenre for ya), can attest. They were noizier but not necessarily noisier than Gloom, noizy but not noisy. Am I being cryptic? Let's put it that way. Defector, like Gloom, saw the noise aspect of punk music as a creative statement and an aesthetic trope. As it was rightly pointed out to me about my review of "Recomendation of perdition", Gloom's assertion that "All answer it chaos!" was also a comment on the mid/late 90's trend of cleaner production, sound and texture in crust punk and hardcore. The chaos they referred to was precisely their intent to go back to a hardcore essence where noise and rawness prevail. Although there is no denying that the noisiness of mid-90's Gloom and Defector were completely intentional and denoted some crafty and tight musicianship, as opposed to a lot of 80's bands whose noisiness had a lot to do with limited skills and/or shitty gears (though the noise intentionality should certainly not be discarded either), these Osaka bands embraced and advocated the noisy textures of Confuse, Gai and the likes. This is how I read Defector's use of the word "noize", as the stance of "noise as a creative choice". 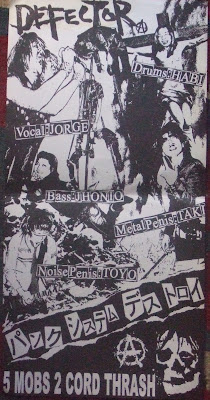 However, Defector did not use "noize" in the same way as Gloom and not to the same effect either. In fact, you can almost grasp Defector's perspective just by looking at the cover and the insert of "Punk system destroy" since they are ripe with information. In 2003, Defector's message was the following: "It's just like a law / Punk system destroy / Fuck regulations, fuck it!! / Burn away your explanation!! Kill the regulation punks!!". Now, that sounds a bit harsh, innit? You could probably read it in the same light as Gloom's, meaning that it could be a critique of the drive for a better, more polished sound displayed by the hardcore world then. I would argue that it also had a lot to do with the growing musical restrictions and closed-mindedness, not only in terms of sound but also of genre, that the band felt. This Defector's Ep (more so than the first one) could be listened to as a purposefully noizy and versatile work that endeavoured to be free from the constraints generated from punk trends and limited expectations. It is like a big proverbial "fuck off!" if you will. Of course, it is also "just" a good crasher crust (or noize violence or however you want to call it) and even as such, it is a worthy one. But then, well, we do have two guitars, don't we? 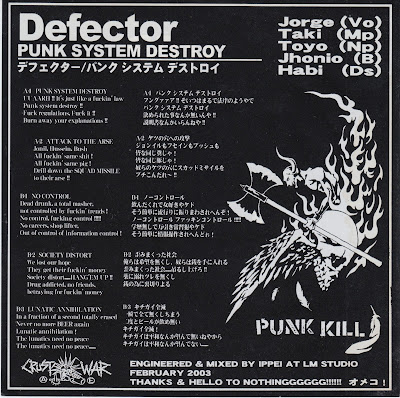 Two guitars in Japanese crust is very unusual, to say the least, and seeing that Defector were made up of rather experienced punks, it must have meant something. While the drumming and bass parts are not that different from Gloom's in terms of intent (understand, they are insanely tight and effective), the guitar work is something else. While Toyo deals with the blown-out, distorted, fuzzy guitar texture and piercing feedbacks, Taki is responsible for the monstrous crunchy metallic crust riffing. And, despite the obvious difficulty to make the two guitars work together, especially when they seem to go in different directions, they do work perfectly but nevertheless tensely, they managed to complement each other but are still somehow frictional. You have that extremely distorted sound that is used almost as a layer of noize on the one hand and then groovy old-school crust riffs on the top of it and the crux of the Ep lies in the conflicting yet pregnant songwriting relation between both. I am not a particularly good musician, but I am pretty sure that cannot be easy to do right and tastefully. The two songs on the B side ("No control" and "Lunatic annihilation") demonstrate fantastically a very unusual blend of Confuse/State Children texture with SDS/Effigy metallic crunch. But if the blend is so successful, it is also because of the songwriting vibe of Defector and what they intended to create as an atmosphere. While I argued that Gloom were going for a representation of the brutal insanity of modern life, Defector picked another side of insanity, one that is clearly deranged and emerges from a desire for the loss of strict meanings. Defector's music sometimes does not just represent insanity, it just sounds insane and demented. It stems from the unexpected changes and moments in the songs (the opening of the "Lunatic annihilation" sounds like a madman's dream), the drooling ferocity of the songwriting and also the constant presence of that distorted guitar that gives the impression that the songs were recorded over an old tape and that some of what you hear belongs to completely different songs. It was a conscious creative effort from the band (quite postmodernist actually) to convey the sense of a dislocation of meaning that still produces liberating artistic cohesion. Fuck regulations, right? 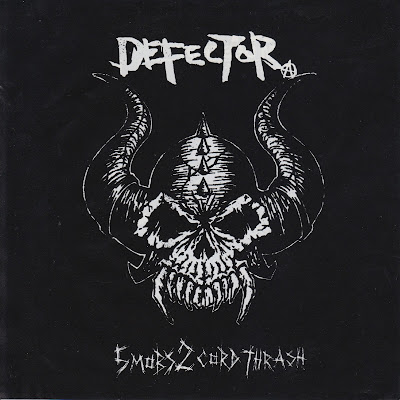 On a strict musical level, this is a crust hardcore tornado you are facing. The Japanese Bristol sound is here, the Doom/ENT/Sore Throat tradition too, some Hellbastard/SDS metal riffs, I hear some Anti-Cimex worship here and there and Discharge also plays a central role (there are several visual references to them on the cover)... This is a very intense, aggressive, over-the-top, noizy punk as fuck record but also one that I think is very interesting to listen to carefully. A proper "Noize not music" effort is always more than just that and in this case, it is certainly more subtle than the primitive "5 mobs 2 cord thrash" suggests, like an articulate primitiveness. Similarly to Gloom's "Recomendation of perdition", you can find dead crusties on "Punk system destroy", this time impaled rather than hung and the slightly deranged cheesy montage with the band members indicates that fun was had indeed. "Punk system destroy" was released on Crust War in 2003 and the band also appeared on the label's 2005 compilation Lp "混沌難聴大虐殺 Konton Damaging Ear Massacre" alongside Framtid or Poikkeus. Interestingly, the two guitar players kept doing what they did, with "Metal penis" Taki playing in Zoe and "Noise penis" Toyo fronting ZyanosE a few years later. 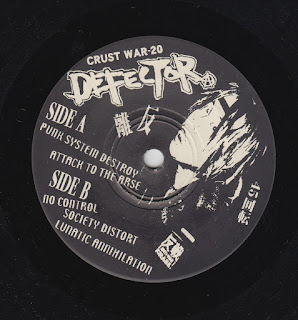 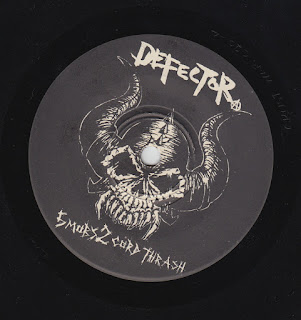 Posted by The Earslaughterers at 18:55