I wish to express my sincerest apologies for the short break I had to take (I wish I had an alright excuse but it is mostly because I am a disorganized lazy bum) and truly hope that no breath was held. But let's not dwell on this and let's get back to Japanese crust, shall we? 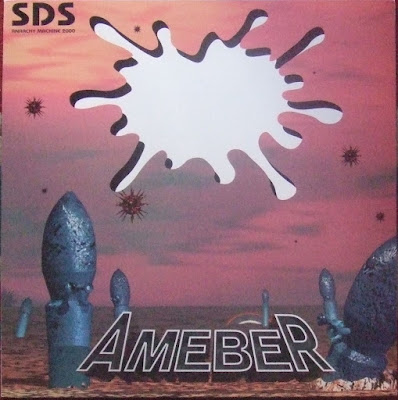 Today I am extremely pleased to rave, once again, about a band that has become a regular guest on Terminal Sound Nuisance (they deserve to have their own parking space at that point), the mighty SDS. Since it feels pointless to make the introductions, I refer you to earlier posts (Future stays in darkness fog, Crust and anguished life and Meaningful consolidation) if you want to know more (and why wouldn't you really?) about the band's pre-"Ameber" period. Probably more than any other act, SDS embodies the essence of Japanese crust, although the band never defined itself as "crust". This is not as paradoxical as it might seem since they belonged to the first generation and, under the moniker Sic Death Slaughter, appeared on the "Suck my dick" compilation tape as early as 1987, which not only made them contemporaries of the UK crust explosion but, more importantly, located the band in a timeframe when the term "crust" was not yet consolidated as a genre-signifier. Basically, SDS, like many early crust bands, witnessed the retroactive use of the concept of "crust" applied to their work, even though their influences were to be found in protocrust bands like Discharge, Amebix and, above all, Antisect. A much more relevant way to look at SDS would be to see them as a "UK sound band" (the notion was discussed in the introduction to the series) since the recreation of the classic British hardcore punk sound - understood here more as a specific sound and vibe rather than a strict geographical space - was always at the core of the band's songwriting. This peculiar drive in the broader Japanese punk context of the late 80's made SDS a somewhat unique band, despite their overt referentiality which should not be mistaken as a lack of originality in this specific context. While the Bristol sound had been very popular for the largest part of the 80's, SDS were the pivotal ones who, also thanks to the earlier impetus of Crow, significantly shaped the love for the UK sound of Discharge, Discharge-loving bands (not to be confused with "Discharge-influenced bands", as it is all a matter of degree and template) and the Discharge-fueled metal-punk breed that they generated that would prevail in the 90's and spawn a new genre in Japan. 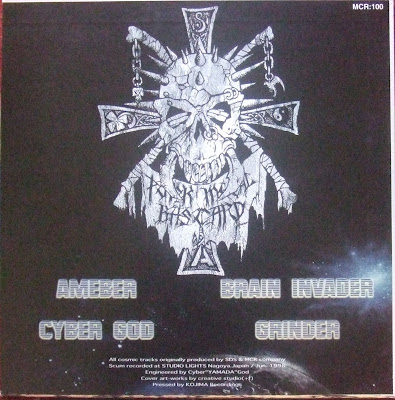 As mentioned in them fancy sentences above, SDS were a unique band and their originality lied as much in the music itself as in the concept underlying the music. They took what they saw as "the UK sound" and used it as a meaningful clay in order to create cohesive works that are much more intricate and subtle than a mere superficial glance would suggest. And this is why I have always loved SDS records, they all have a creative direction while simultaneously echoing with each other through the UK sound chamber. That and because they are about as intense as a charging rhino. I chose "Ameber" for two reasons. The first one is cheesy. "Ameber" was the first SDS record I bought as the cd version could still be located on some distros when I got it (that'd be in 2004 methinks). But I also wanted to write about it because I feel it is the SDS record that is the least discussed (if at all) and the most misconceived. And I just won't have that. Not on my watch. 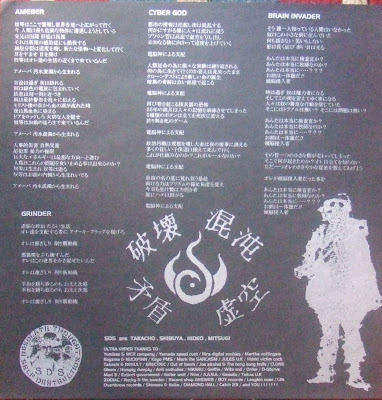 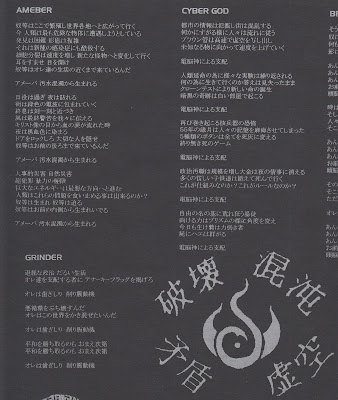 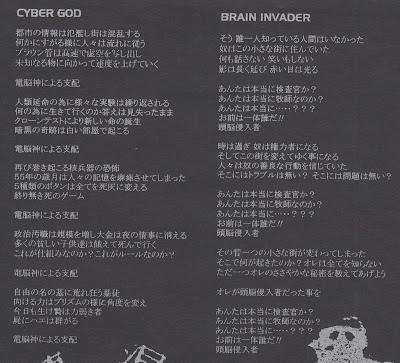 "Ameber" was recorded in Nagoya, in June, 1998 and released on MCR Company in September on vinyl and in December on cd (it was actually the label's 100th release). "Ameber" was the follow-up to the "Scum system kill" 1996 Ep that marked the start of the band's "Punk metal bastard" era which revolved around insanity, musically and aesthetically. With a twelve-year long existence, SDS had already been around for a while when "Scum system kill" came out and for any crust band to survive, they have to evolve and add new things to their recipe (Misery is a prime example of that). To a relevant extent, the last four SDS records can be seen from a narrative perspective, each of them a retelling of a similar madness story but from a different point of view in time. "Ameber" is about shapelessness and polymorphism. Far from being just a nod toward Amebix, the name "Ameber" (meaning the parasitic amoeba) actually pointed to the many forms or indeed, to the absence of form, that evil and alienation can take. The cover is purposefully unsettling as the band aimed at breaking from the traditional black and white visual on the vinyl version. If the name "SDS" wasn't written at the top of the cover, I would think it was some sort of heavy psychedelic space-rock record. The idea behind the drawing was one of a threat without definite boundaries and matter and, given the very futuristic design, I would tend to think that it also expressed the coming of an alienating and discarnate digital age that causes a directionless insanity (a theme that would appear again on 2000's "Digital evil in your life"). The trope of a threatening shapelessness can be found in several instances in "Ameber", notably with the ominously blurred drawings of a soldier and of the circular design. Interestingly, the cd version introduced a new cover that looked very different but expressed a similar idea. Even though the threat has the shape of a monster made of electricity, it is still immaterial, fluid and subject to change, just like a modern amoeba that would be the child of the swamp technology feeding on dead matter rather than the product of a natural process.

Out from the cyber void

If the music of "Ameber" was meant to reflect this idea of a madness-inducing, shapeless technological society, it does not imply that it is without direction or focus, quite the contrary. It is one tight and powerful storm of a record. It is certainly SDS' most atmospheric and versatile work. The four songs are blended with each other through the use of creepy, psychedelic noises and ambient textures which confers "Ameber" a sense of narrative wholeness and storytelling. Although the songs themselves are pummeling fast-paced numbers, the different layers of sounds that tie them together, the changes in vocal tones (from gruff possession to evilly high-pitched), the presence of heavy epic mid-tempo transitions and the looped, stretched guitar riffs gives "Ameber" a strange and deranged organic quality. Antisect's "In darkness" era is of course an important reference point here, especially in the emphatic riffing and in the structural fluidity of the record, Anti-System also comes to mind and I distinctively hear some Zygote (for the heavy psychedelic vibe) and Amebix as well (for the incantatory mood) but it is clearly, first and foremost, SDS creatively at work. The bass lines are insanely groovy as they provide the backbone to and enhance the deceptively simple guitar riffs the impact of which relies on their circularity; the drumming is focused and super tight; there are some over-the-top aggressive guitar solos and the vocals are aptly insane-sounding and convey that sense of techno dementia. It is like Antisect had been caught in an electric storm and were battling in cyberspace. There is a relentlessness, an inevitability in the songwriting as the songs crash like waves. In its precise play between form and content, "Ameber" is almost a concept album, although I dislike the term, there is a sense of an organicity conflicting with technology and about to clash with it (as song titles like "Brain invader" and "Cyber god" suggest), on the brink of losing the battle, which is actually a recurring motif in crust if you think about it. "Digital evil in your life" would finish the story of this tension by offering a savage glimpse into an actual insanity that has finally come. 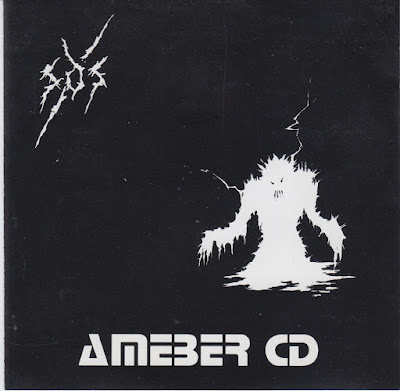 Mega hyper super thanks to Kenichi who took the time to answer my questions for this post and gave me some interesting insight into "Ameber". 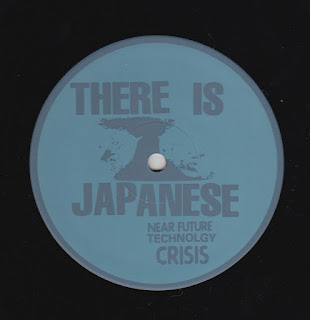 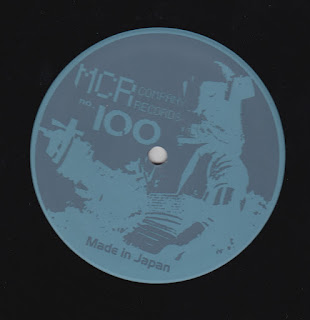 Posted by The Earslaughterers at 19:52