This was a tough one to select. Undecisiveness struck the Terminal Sound Nuisance's headquarters like never before, plundging my already lazy staff into a state of existential stupour. I asked the Gods of Punk for advice and wisdom but they remained silent, despite me sacrificing a couple of Discharge records to please them (reissues though, I have never been that religious). So helpless was I that I even asked that nice woman at the supermarket about it, but alas, she threatened to call security for some reason. I was on my own, on the verge of insanity, not unlike the nameless protagonist of Zweig's "Schachnovelle".

I honestly did spend a couple of hours listening to AGE's "Inside darkness"and Hakuchi's "Gods disturb" back to back because I just could not make up my mind. They are both excellent records, but for different reasons. Despite the fact that Hakuchi and AGE have three members in common (only the drummer is different) and that the latter can be seen, to a relevant extent, as the sequel (rather than the follow-up) to the former, their respective production emerged in different contexts, hence the difficulty. Although late Hakuchi shared significant similarities with early AGE, there was a two-year gap (a bit more actually) between the end of Hakuchi and the formation of AGE and close to four years between the recording of "Gods disturb" and "Inside darkness". So basically, while the records' musical content are not that far away from one another, their context much more so. If "Gods disturb" definitely marks the apex of Hakuchi, "Inside darkness" does feel like a band's first record. Just on a visual level, the discrepancy is remarkable. As an object, "Gods disturb" is much more refined, with an additional insert, additional artwork, translations, even the quality of the cover is superior, while "Inside darkness"'s lyrics sheet is basically a cheap photocopy. The first one was released on Overthrow Records, a label subsequently renowned for putting out some amazing records, while the second was the first production of Dewa Records (a label that released nine records in total). I am not saying that "Gods disturb" is a better record than "Inside darkness", just that, for all their likeness, as records, they cannot really be seen in the same light. And that's what made the decision so bloody difficult. But in the end, I went for AGE, a band I am much more familiar with, whose records I have a first-hand experience with and therefore means more to me on a personal level. 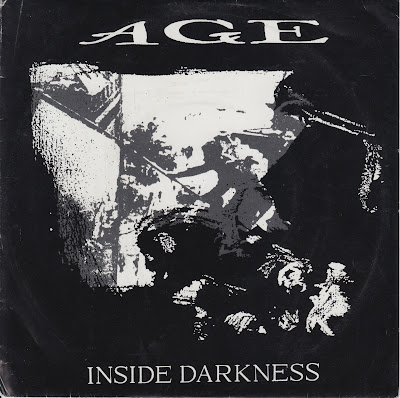 Still, let's talk a little more about Hakuchi first. This pre-AGE band was from Niigata and existed from 1991 to 1994. Originally, their sound was deeply rooted in traditional Japanese hardcore and their first 1991 Ep, "Fall a sacrifice to delightness", was a fine example of this singularly uplifting and triumphant genre. Little by little, they turned to the crust side of thing, and their last two works, the aforementioned 1993 Ep and 1994's "Last demo" (a live recording I know only one song of, but let me tell you that it is an anthemic, mid-tempo apocalyptic crust number to die for), clearly embodied the new sound the band had been moving toward: old-school crust with a Japanese hardcore edge. "Gods disturb" was unlike any other Japanese crust records at the time and despite falling under the same stylistic umbrella as SDS, it sounded nothing like SDS as both bands had significantly different songwriting intents. The song "Disturb" is, to this day, one of the best old-school crust songs written in the early 90's and I am not saying this lightly. From the thick, dark, organic production reminiscent of Swedish death-metal at times and even of Terrorizer (for some odd reason, I am reminded of them), the tribal Amebix beats, the crunchy, groovy riffs, the powerfully scorching vocals, the great somber anarcho visuals, the solid lyrics to the genuine nocturnal sense of doom permeating the songwriting... Everything just works on this Ep, which sounds incredibly modern from a retrospective point of view and probably doesn't get the credit it deserves, and had the band kept these dynamics, I can only imagine how brilliant a full Hakuchi Lp would have sounded in 1994... 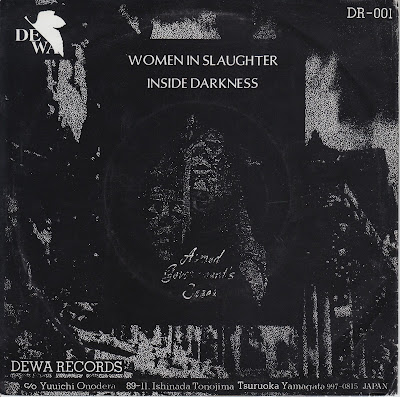 Fast forward to 1996 and AGE, a moniker that was meant to be the acronym for Armed Government's Error although I have never heard anyone call them like that (it would just sound silly, wouldn't it? Like saying "Liberty Independence Freedom Equality" instead of LIFE). Looking closely at "Gods disturb"'s insert, you can actually find two separate occurrences of the word "age" ("The age of confusion" written with the Crass font in their anarcho visual and in the sentence "We know life disappears / This age is alive to muster up courage!" which is at the top of the Japanese lyrics sheet), which could be seen as subtly linking the two bands through lexicon (an idea that I like) or I am just reading far too much into this because I am hungover... 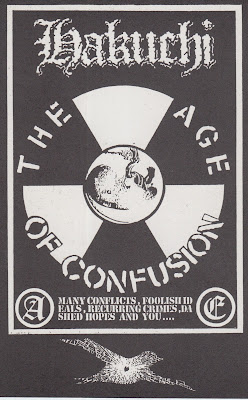 
I first came across the band through Tribal War Asia, the Japanese division of Neil's Tribal War Records run by a Crocodile Skink dude, and the label's 1999 cd version of "Exploding insanity" that also included "Inside darkness" and the split Ep with Deride. For some reason, the record could still be found easily and for cheap in the early/mid 00's and I trusted the Tribal War tag with my life, so I jumped on it, completely unaware of the Hakuchi connection at the time (but as I mentioned, I had more than enough to do with current bands then to really bother about older ones). While there is an undeniable musical linkage with "Gods disturb" and indeed, you can hear similar ideas in terms of songwriting, "Inside darkness" is nonetheless a discrete record, that I personally see as very influential, if not responsible for, in the reopening of the metal crust gates in Japan that bands like Effigy, Disturd or Acrostix would go through. The production is thinner and rawer, which gives the songs a very primal, almost animalistic, quality. Gone are the death-metal tones and the Japanese hardcore traces (which would be back a few years later) as AGE gave room to specifically crust influences and sonorities on this first record. The Amebix influence is stronger than ever on this one and this lot was probably the first to openly incorporate Amebix worship into their music. The first song, "Women in slaughter", opens with ominous feedbacks, the very same bass chord as that of the beginning of "The moor" and the singer is madly shouting "Slaughteeeeeeeeeer", so you really cannot be more straight-forward than this (well, I am wrong, you can if your band is Zoe). The ensuing epic and filthy metal riff, played on a groovy mid-paced beat, brings to mind Sacrilege and Deviated Instinct as much as Black Sabbath, before descending into Antisect soloing and bursting into a beefy, "Out from the void"-meet-late-Nausea-at-an-SDS-garden-party, faster-paced crunchy metal punk number with emphasized, desperate-sounding vocals. The second one, "Inside darkness", uses heavy Axegrinder riffing - but played harsher, SDS-like, for AGE were sonically closer to the Japanese crust pioneers than Hakuchi were - combined with groovy Amebix beats (amebeats?) and includes a typically crusty, even orthodoxally so, eerie moment with dark intricate bass lines, bleak guitar arpeggios and haunting gruff vocal works that gloriously points to Nausea and Misery. It is all a serenade to me to be truthful. 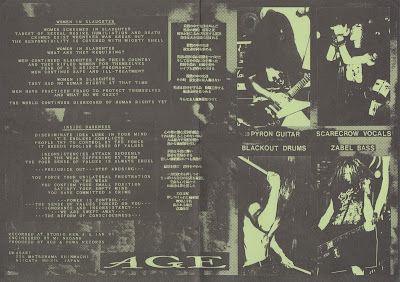 The aesthetics of "Inside darkness" fit well with the tunes, aptly bleak, suggestive ominously rather than directly. I especially love the Armed Government Error's logo with the two obscured faces on the backcover as they could not represent the vibe and mood of the music better. Lyrically, "Women in slaughter" deal with the sexual slavery imposed on women by Japanese troops during WW2, which is not a common topic for a crust band but is definitely a great idea, while "Inside darkness" is about mind control, self-alienation and how hateful ideas are instilled in our brains. Good stuff. On this Ep, the boys all picked aliases, two of which may refer to classic UK crust (or may not, I am in full "wild guess" mode right now), with singer Asari renamed as Sacrecrow (Deviated Instinct?) and guitarist Hoshi picking Pyron (now, this is far-fetched, but could it hint at Hellbastard's "Pylons"??? And isn't "Inside darkness" basically a reformulation of "Heading for internal darkness"????). Following "Inside darkness", AGE released a split Ep with Deride in 1998 that was very much in the same vein, and then, one year later, the minialbum "Exploding insanity", with a new guitar player, Tsuzy. His arrival in AGE coincided with a shift in terms of musical direction as the band, from 2001's "Four wings" on, went for a more technical and abrasive brand of Japcore-infused crusty metal-punk, that was not quite unlike late SDS. I cannot say I relate quite as much to AGE's late materials as to their early stuff (I know, I know, it is a common cliché but I desperately need the punk points right now) but a record like "The scar of lead" still puts me in a jubilant mood whenever I play it.

My copy of "Inside darkness" has clearly seen better days, but hopefully the files and scans are good enough. 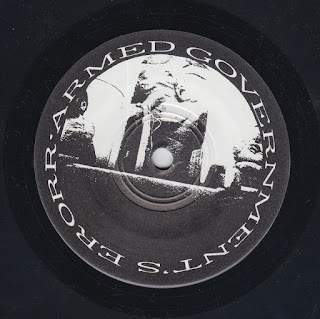 Posted by The Earslaughterers at 17:28