I already briefly discussed "Antibands" in the Antiproduct post and this one provides me yet again with an opportunity to rant and rave about one of punk's most beloved prefix. Antiauthorize. 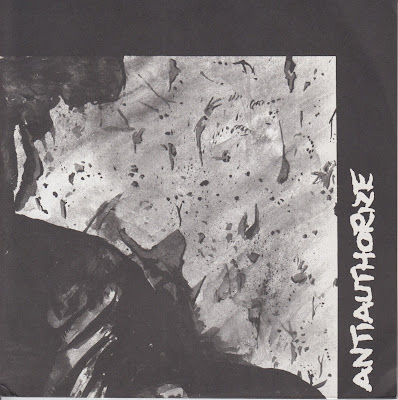 Or is it Anti Authorize? I mean, it appears as "Anti Authorize" on the backcover of the "Meaningful Consolidation" double Ep compilation, although the band's artwork does indicate the "Antiauthorize" spelling. I think we can rule out "Anti-Authorize" but the mystery remains. Now, you may think I am nitpicking but it does matter as the meaning is slightly altered, although the nuance was probably lost on the band at the time. Going with "Antiauthorize" would make sense for a reason that has little to with lexical semantics but everything with logical ones. Given the band's obvious obsession with Antisect, it wouldn't be unreasonable to read their used of the "anti" prefix as yet another nod toward the Brits, who positioned their own "anti" right before the substantive (it is "Antisect" and not "Anti Sect", that'd just look ridiculous, although truth be told, I have read occurrences of "Anti-Sect" in quite a few zines from the 80's). However, the name is actually spelt "Anti Authorize" in the photobook "Inferno Punx" and in the official video of a live performance recorded in Tokyo in 1994. I am therefore assuming that, if the name variation "Antiauthorize" was indeed used on some of the band's visuals (on this particular Ep for instance), it was for aesthetic and not semantic reasons, and that the correct spelling was "Anti Authorize". Therefore, I will be using the latter throughout this write-up or, more likely, since I am a bit of lazy bugger, just "AA" which makes this paragraph a little pointless but then I am paid by the word. 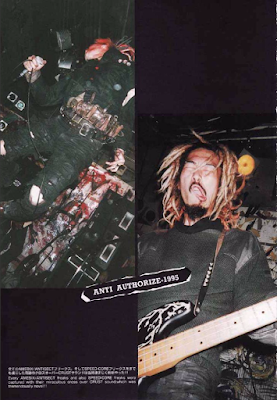 Is that an Antisect-themed bass decoration? Yes it is. Meet my new role model.


Now, I hope I haven't put everyone to sleep with my linguistic divagation especially since I do not feel Anti Authorize is such a great name after all. It is a bit of a mouthful, although I can relate with the intended meaning behind it... But let's get to business. I actually only got into the band recently through "Meaningful Consolidation", which I bought on a drunken Discogs night. I had heard Anti Authorize before of course but never really paid attention to them for some reason. And even their two songs on the compilation, despite being solid tracks, did not particularly enthuse me. It was only when I decided to have an all-Japanese series for Terminal Sound Nuisance a few months ago that I gave this Ep another shot and thanks fuck I did because it is an ace record that offers an interesting insight into the creative imbrications of Japanese crust. 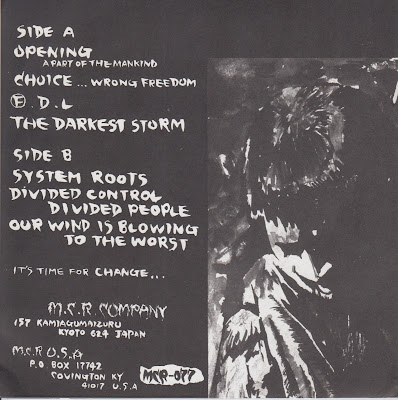 Anti Authorize were from Tokyo and must have formed - at the latest - in 1992. They appeared on a Punk And Destroy vhs that also included live sets from SDS, CFDL and Battle of Disarm (what an amazing line-up...), all recorded at Huck Finn, in Nagoya, on May 15th, 1993 and they just could not sound that good in less than a year. The band seemed to have been active between 1993 and 1997 and only appeared - but for our present Ep - on compilations like the rather good (if bizarrely named) "Kamikaze attacked America / Yankees bombed Hiroshima, Nagasaki" jointly released on MCR and Sound Pollution in 1995 or the mastodonic "Chaos of Destruction volume 3" triple Lp (!) compiled by Kawakami in 1997. Anti Authorize's Ep was recorded in 1995 at Studio Penta, a network of studios used by quite a few bands (like LSD, Beyond Description or even Envy) to record, and is entitled...

... and we're back to postmodernist meaning instability. Is it called "Our wind..." or "It's time for change..."? Discogs rooted for "Our wind..." but I have seen occurrences for "It's time for change..." too. The foldout structure of the Ep does not particularly help on that level as the front cover is actually just one part of a larger - and quite stunning - drawing so that, when looking at just the cover, you can't really tell what it is and you actually have to unfold the thing to get a grasp of it. At the bottom of the drawing, "Our wind..." is written but you only notice it when you unfold the cover completely, so it looks like a self-titled Ep at first glance. But then, "It's time for change..." is mentioned just below the tracklist on the backcover as well as on the A side's label. Cornelian dilemma AGAIN. I went for "Our wind..." because the overall visual organization, despite its confusing aspect (without mentioning the cheesy fart jokes that "Our wind..." can entail), still points in this semantic direction and because "It's time for change..." is actually the name of an Anti Authorize's song included on the aforementioned "Kamikaze" comp but absent from this Ep. Now, you really have to engage with that band's work to make sense of it all, don't you? 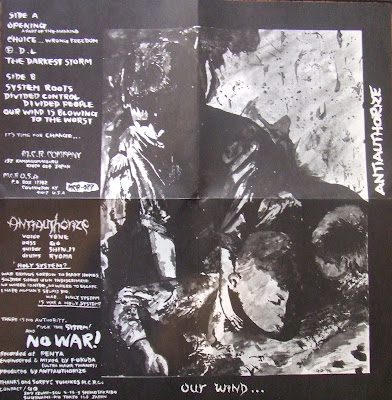 "Our wind..." (or however it is really called) from Anti Authorize (or whatever their name really was) is an early example of self-referential Japanese crust. Let me rephrase that: SDS. Anti Authorize borrowed SDS's crucial antisectian referentiality and intertextuality, on both musical and visual levels, in order to create one storm of a record. Of course, AA referred heavily and very directly to Antisect themselves, but the way in which they did it left little doubt about the identity of their methodological mentors. Just like SDS paid tribute to the Antisect worldview during their early 90's period, Anti Authorize reworked this very particular, peculiar referential sense for this Ep. "Our wind..." was a bit like an homage to the drive behind "the ghost of Antisect" (although SDS were, of course, still very much alive and kicking at that time). Although certainly never as metallic as SDS, AA's dischargy moments, in terms of musicality, are heavily reminiscent of the Japanese crust originators. As such, "Our wind..." appears to be one of the earliest examples (but definitely not the last) of influential circularity within the national crust scene, but rather than explicitly referring to SDS, the band chose to refer to SDS's brand of referentiality. 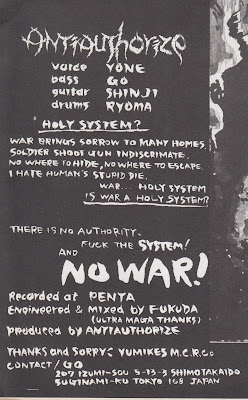 The Ep almost reads and sounds like an Antisect bingo at times. The 83/84 Antisect font is everywhere (they even used it, not once, but twice for the label's name) and a variation on the 86/87 one can be found on the label. For good measure, the Discharge font is on the cover and the classic Crass one on the label of side B (the lettering of the tracklist being basically a blend of Discharge and Antisect fonts). The titles of the songs are rather unequivocal with, again, a reference to Antisect ("A part of mankind" and the possible Ep title, "It's time for change...", obviously hinting at "Hallo there! How's life?"), Amebix ("The darkest storm") and possibly CFDL ("(F).D.L." with the circled "F"). Musically, Antisect is a haunting presence purposely summoned by the band. The introductory song uses the same declamatory repetition of the word "Change" found on the song "Hallo there!", the sound of the wind (which acts as a trope) refers to "The ghost of mankind" and "A midsummer's night dream", the darkly insistent guitar riffs and the spoken parts (up to the effect used on some of them) cannot fail to remind one of "In darkness, there is no choice".

But does "Our wind..." sound like Antisect? Absolutely not. The influence and the overall referring only serve as props and not as basis (unlike Disclose and Discharge for example). Anti Authorize was a Japanese crust band through and through. "Our wind..." was their contribution to the work done by SDS from 1990 to 1992 upon which they staunchly built, inviting extra guests to the table. It is on the whole a tad faster than SDS (but it does have the same tight grooviness and rocking power) and the opening song (basically a Ghost of Antisect's take on Extreme Noise Terror's "Statement") ends with a blown-out, lightning fast noisy crust song with harsh vocals. The use of feedback and distortion on this one (and indeed on the whole first side) points toward Confuse and the likes, although it is nowhere as systematic. The vocals are harsh and have a raucous desperate tone that work very well and I particularly like the occasional, but always clever, use of several voices to add some extra crust edge à la ENT/Disrupt/Mortal Terror. As expected for the (sub)genre, the level of quality in the delivery of the guitar and bass is outstanding, everything works so bloody well, but I am most impressed with the drums in particular. Of course, the drumming is super tight but what really strikes me is the variety in the beats and in the sonorities, they are thick and powerful but never redundant nor predictable and always serve the songs' storytelling. 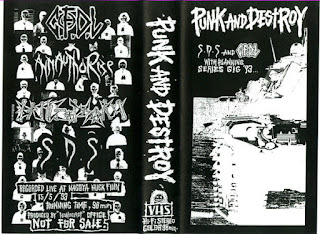 "Our wind..." is not only great musically but also textually as it sounds like a cohesive and meaningful unit rather than "just" a collection of great songs. The presence of a proper introduction and conclusion gives the record a moody, story-like quality, reminiscent of anarchopunk. It is not just a slab of top-shelf noisy Japanese crust, it also creates its own vibe, atmosphere and narrative, which is a rather ambitious move. A filmed live performance of the band in Tokyo from 1994 (and let me tell you that they ripped live) reveals that Anti Authorize also used other media than music in order to create meaning. The live set is introduced with a short montage showing gloomy, blurry images of destruction (I'm guessing) superimposed with a text in Japanese. It ends with these words: "WALK TOGETHER EQUALLY. It's time for CHANGE, LOVE & HOPE... Antiauthorize '94". And then all hell breaks loose, of course. It is nothing really spectacular, but I truly enjoy the intent to set a particular mood and offer something more than just a filmed gig. Multidimensional stuff here. Luv it.


"Our wind..." was released on MCR Company (it was MCR-077, which is pretty neat) and despite the undeniable power of the record, it is not one that seems to be particularly sought for. Go figure. 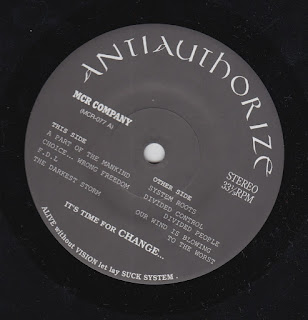 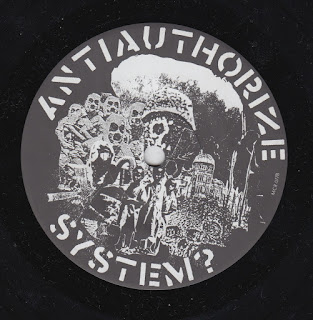 Posted by The Earslaughterers at 19:31