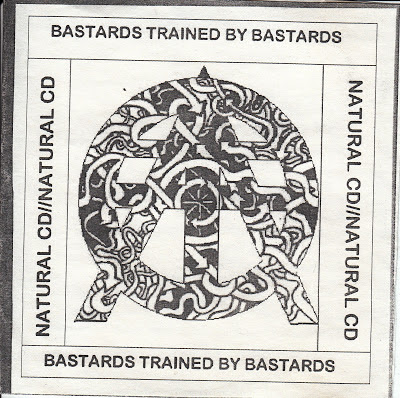 In the punk underworld, Stoke-on-Trent is known for one thing: Discharge. In fact, it is rather surprising that the city council hasn't built a statue of the "Why?" line-up before the town hall. But Stoke is not a Discharge-only city either and the oddly-named Bastards Trained by Bastards happened to originate from this very place. BTBB were a short-lived band made up of members of other local punk bands, the always excellent anarcho punx Kismet HC, the thrashy Eggraid, the spiky Wounded Moose and Friends of Ken (which I have never heard). The myface page of BTBB says that the band formed in 2002, was pretty active in 2003, then pretty much stopped, then started again in 2007, never to be heard of again (to my knowledge). Pretty chaotic to say the least.

This cdr is BTBB's only output. It is basically a live recording of their second gig (on the 15th, March, 2003 after four rehearsals to be accurate) with the addition of one song that was recorded during their fifth rehearsal. I guess BTBB was more of a side-project, a way to have some fun and spread some political ideas, rather than a "serious" band meant to last long. I got this demo in a £1 box (or £2 box, I can't remember) at an Extinction of Mankind gig in Leeds, sometime in autumn 2003. The gig was put on by the Punktured collective (remember that Rape Crisis benefit cd) and someone had set a box with various records and zines that he or she wanted to get rid of. So I bought that particular cd as well as PUS' "Death from the skies". As you can see, this demo was crafted in true DIY fashion and you will notice that whoever did the artwork and the layout was just getting used to computers. Joking aside, I do like the Oi Polloish anarcho symbol a lot. Unfortunately, the lyrics are not included with the demo, which is a shame since the boys appeared to have a lot to say from what I read in an interview in Headwound from that time. As for the name, "Bastards trained by bastards" is actually a line taken from a Conflict song. 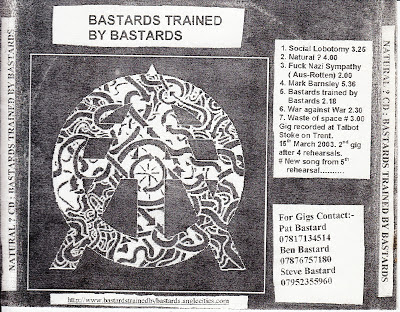 The sound on this cdr is surprisingly good. Despite it being a DIY live recording of a band's second gig, the sound is very clear, the band is quite tight and the first six songs are a perfect fit for a demo. Musically, we are definitely in 90's territory. Aus-Rotten (they cover "Fuck nazi sympathy" to great effect during the set) could be a good point of comparison here, as well as Conflict, Resist and Exist, Spite (for the more hardcore parts), Another Destructive System and Kismet HC (especially for that distinctive drumming style). They have a great song about Mark Barnsley, a working-class British anarchist who did 8 years because of a brawl in a pub involving a group of drunk students (obviously, the pigs were all too happy to nick him and left his assailants alone), one about animal rights and specism ("Natural?"), the "Obligatory war song" (yes, that's a Faction quote) called "War against war" and I am guessing "Social lobotomy" is about the our own passivity before oppression and how we are taught to be helpless and powerless (but since I cannot quite decipher the words that may be me wanting this song to be about that!). The last song was recorded during a rehearsal and is rough as fuck so be warned. It is a faster song with vocals of the high-pitched and yelled variety. In fact, the sound is so distorted, you could think it is a modern "rawpunk/noisepunk" band! 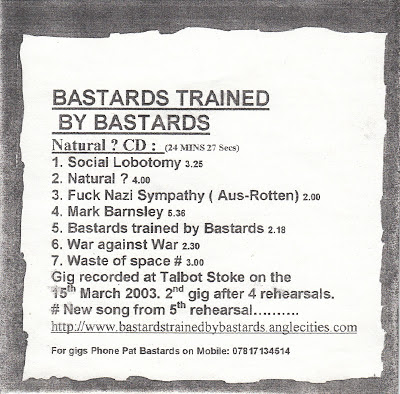 BTBB was a rather anecdotal band but there is an unmistakable energy and sincerity that make me choose to post this record (that and that annoying evil voice whispering in my ear). Beside, I like the fact that they cover "Fuck nazi sympathy" and ten years later, I think sadly we should start covering that song again. The far-right is on the rise everywhere in Europe (just take a look at the openly reactionary, nationalistic, homophobic demonstrations in France right now, Golden Dawn in Greece, bloody serial killers in Norway, the EDL in Britain and on and on and on). The bastards are organized     and disciplined (which, given their fascination with order and hierarchy, is hardly overwhelming news) and while I know that writing antifascist punk songs is not going to stop them, it can still, potentially, make us think about what we can do about that. Aus-Rotten wrote this song because of the complacency they saw around them. Not caring is not gonna cut it.