We have been talking a lot about band names on Terminal Sound Nuisance and by that I mean that you have been reading, with faithful awe, what yours truly has to say about terminology. More often than not, I find myself caught in a maelstrom of semiological circumvolutions about dis-prefixed monikers and to be honest I really enjoy that. One of life's simple joys. The band that inspired me to write this short piece today is, rather expectedly if you have already bumped into the blog, even accidentally, because, as people say, shit happens and loneliness often induces longer hours spent before a screen, not that that implies you are lonely, but you might be in which case said piece will hopefully entertain you, Axebastard. If you know anything about crust, if you have at least some basic knowledge about this mighty wave, you will be bound to know why Axebastard are called Axebastard, the subjective (un)tastefulness of such a lexical choice not withstanding. The prefix "axe" for Axegrinder and the substantive "bastard" for Hellbastard. One may propound that they could have gone for Hellgrinder but I for one am of the opinion that Axebastard was the wisest, if you can call it that, option of the two since Hellgrinder, to my ears anyway, conjures up images of Metal Punk Death Squad action rather than stenchcore goodness. 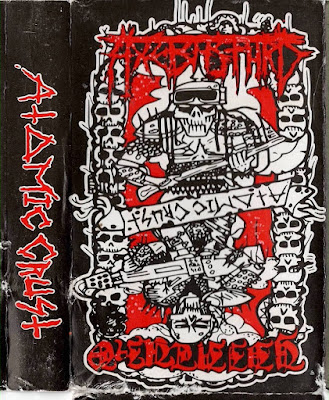 Atomic Crust is the title of this split tape just to remind you and make sure that you are well aware that, upon listening to the tape, you will very likely be exposed to crust music or affiliated. I actually hesitated before including the tape in Live by the Crust, Die by the Crust, not because it does not correspond aesthetically and artistically to the template of the series, quite the contrary, but because it was released physically in late 2012, the time limit of the selection, and both sides were recorded in 2010, which is outside of the limit. But I suppose rules are meant to be broken or as Abrasive Wheels used to sing "No rules is the first rule" so there you go: the 2012 split tape between two Finnish bands Axebastard and Ydintuho.

Before getting to the actual music, I have to admit that the choice to include this work had a lot to do with how the tape, the object looked, to be more accurate, it mostly had to do with how hyperbolically, emphatically and shamelessly CRUST it looked. It does not come with your usual cold jewel plastic case but with a foldout paper case enveloping the tape along with a separate lyric sheet. Like the vinyl or cd formats, it is not uncommon for DIY punk tapes to experiment with different sort of casing techniques, even if it makes the object more fragile and prone to tears, but still  in this case it looks absolutely brilliant. My detector measured significantly high levels of crustness just with the foldout paper and it almost exploded upon opening the thing. The artwork is saturated with crust signifying, naive and deliciously crude crasher-styled skulls with punk haircuts, war banners, empty bottles, more crusty skulls, some sort of orc, a Mad Max cosplayer with a dilapidated guitar, rows of sloppily drawn skulls, weapons from the Bronze Age, grim black and white pictures with slogans about the nuclear war and a crust skull with a circled A on the forehead. It is like a crust bingo or crust fan service and I, for one, actually really enjoy the band's intent to pay a tribute to the classic crust aesthetics while playing and having fun doing it. I mean, the tape is called Atomic Crust for a reason. Fucking lol, right? 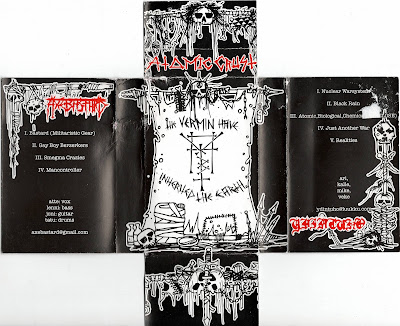 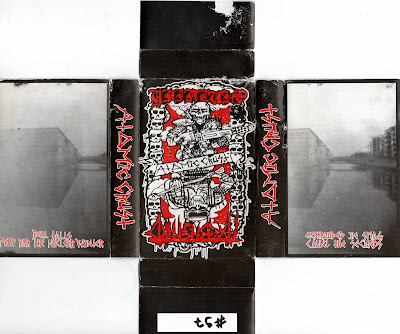 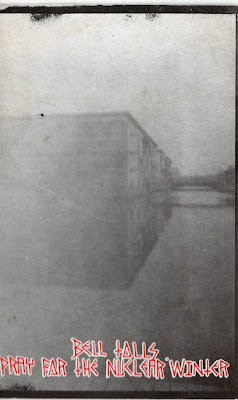 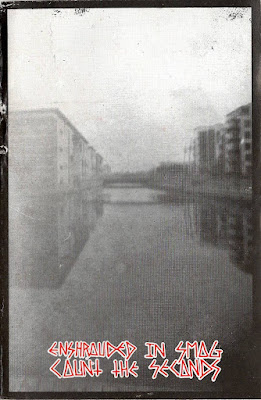 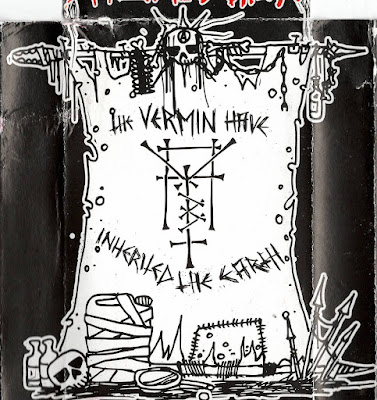 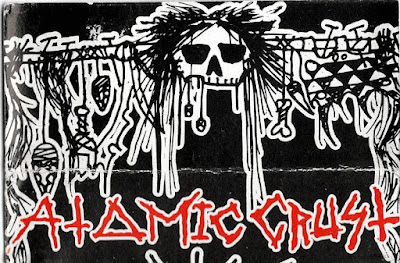 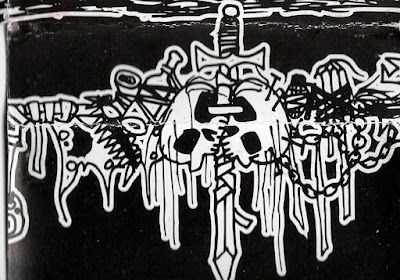 So what about the music then? Technically the first side is Ydintuho, a band from Kuusamo that I had, for some reason, never heard of although they did a split Ep with Kilmä Sota in 2012. Oh well. Ydintuho have been running since at least 2008 and are apparently still active which is a testament to resiliency in an age when the average life expectancy of a band is 18 months, 2 albums, 1 tour and 186 instagram posts. The band proudly claims to play "raw punk deathstrike" and sensibly so. The tracks were recorded in 2010 (I think) so that they aptly represent what Ydintuho were about in their early stage. It won't take anyone by surprise to learn that these Finns engage in raw and distorted d-beat punk. I can hear a distinct Japanese noize crust influence, not unlike Contrast Attitude or D-Clone with vocals reminiscent of Atrocious Madness and a healthy passion for Disclose which they cover lovingly. At that point in time, there were certainly not as many bands going for that classic Japanese crasher noize hardcore in Europe (Giftgasattack comes to mind and a bit later Electric Funeral) so while Ydintuho did not invent that particular wheel, they undeniably prefigured the rapid spread of that noize-not-music niche genre worldwide, a modest achievement perhaps but one that is meaningful if you closely consider the evolution of trends, and they remain a rare Finnish example of the style. I had not played the Ydintuho side for a long while and was very pleasantly surprised. Give the rest of their records a try, they are very much worth the attention. 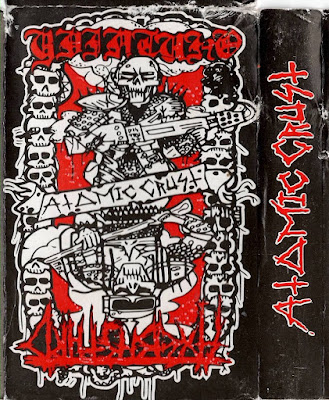 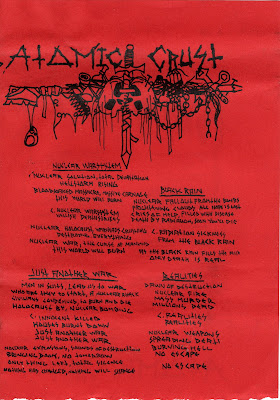 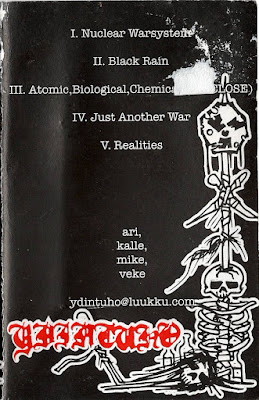 On the other side are Axebastard, the crustier element of the tape. You won't need much imagination to make a guess at what those dirty punks were up to: apocalyptic and rocking raw stenchcore. You could diachronically locate the band in that post 00's stenchcore revival wave that saw the rise of European bands like Cancer Spreading or Last Legion Alive. Sadly the band did not play for long (between 2008 and 2011 I think) and while the rawness of the four songs on Atomic Crust can be rightly appreciated for their cavemen quality, I nonetheless would have loved to see what Axebastard could have achieved with a better production and a proper vinyl release. If you are looking for dirty stenchcore with mean gruff bearish vocals, rocking cavecrust moments interspersed by heavy filthy thrashy metallic breaks, then Axebastard are tailor-made for you. They are not unlike a primitive, preliterate crust-and-proud version of Hellshock and Stormcrow and I cannot help thinking about early Cancer Spreading too, a good thing since they have stood for the Euro stenchcore sound for all of the 2010's. I like how the band tried to use several type of vocals on the opening track, the rendering is not perfect but the idea is sound, and that sort of mid-paced d-beat drumming fits well here. The second number is a groovy Extinction of Mankind-influenced song with ace double bass drumming and expert headbanging power while the third track is a faster, more traditionally pummeling 90's cavemen crust headbutt and the final one is basically a blend of these elements with a gloriously filthy mid-tempo moshing stenchcore conclusion. Nothing ground-breaking but it does leave the listener waiting for more. I am personally curious about what Axebastard would have been able to achieve with a longer format in terms of cohesion, narration and atmosphere because these four songs work very well together. 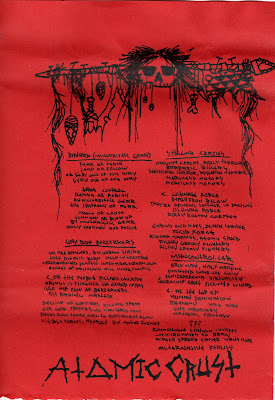 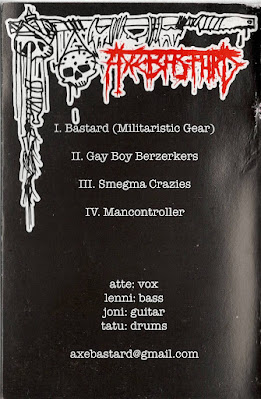 The Axebastard side was also recorded in 2010 and there is a rough 2008 rehearsal tape that you can download on their bandcamp entitled Post-Apocalyptic Visions of Darkness (just in case you were hesitant about the genre) that included a song called "Hellgrinder". Cheeky fuckers. I also found a file from 2009 that is supposedly a cdr demo with different and rawer versions (unmixed maybe?) of three songs on the tape and some visuals for the band and even a picture. This recording is nowhere to be found on soulseek so I included it in the download file, for posterity. Atomic Crust, in the end, can be said to be one for the crustiest crusters that I warmly recommend, if only for the fact that Axebastard is one of the very few Finnish stenchcore bands. That's trivia gold. 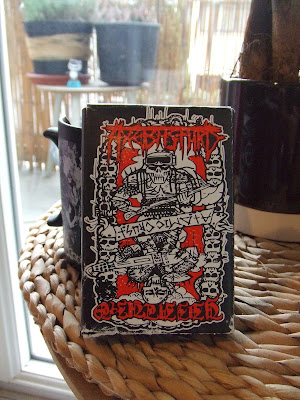 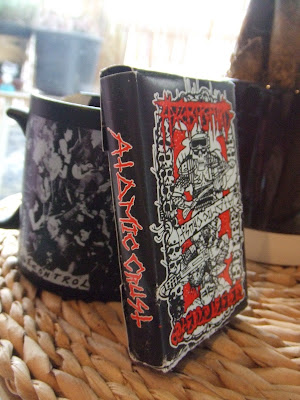 So let's axe the fucking bastard, shall we? 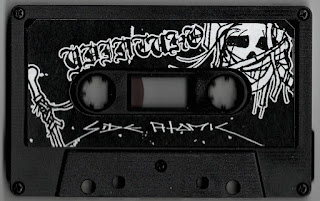 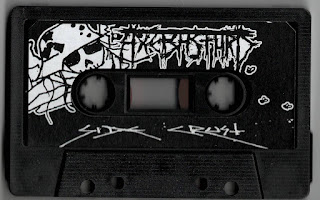 Atomic CRUST
Posted by The Earslaughterers at 08:55