It's that time of year again. On the streets, people look stuffed and exhausted while they are clumsily dragging suitcases full of meaningless gifts that they won't know what to do with in about two weeks. Books they won't read, clothes that do not fit, nasty sweets that your great-aunt bought on her last trip abroad, overcomplicated boardgames or, worse, a mainstream pop-rock album. "Happy homes destroyed and for what?" to quote a great band.

So to make up for all the consumerist frenzy - and the awkward misery it implies - that social conventions have brought upon you on this day, here is a much more punk-appropriate present for you: a Polish crust tape from the 90's. And if you live in a country where Christmas is not celebrated, well, then that's just a regular gift because we are incredibly generous and honourable at Terminal Sound Nuisance headquarters and we would probably deserve to be selected for the Nobel Punk Prize next year. 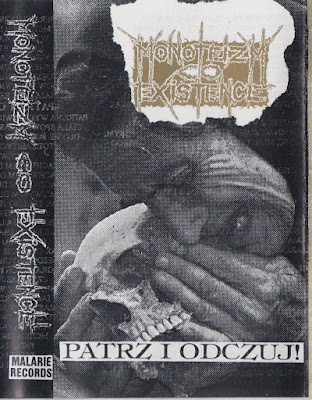 Of course, because under the patches and the extremely cool punk shirts, I am very respectful of conservative traditions and have been confirmed to be, overall, a decent, neighbourly citizen who won't hesitate to play Atrocious Madness at late hours if the situation requires it, I tried to emulate the grandiose Christmas spirit and therefore picked a band with a message of hope, togetherness, peace and interfaith dialogue. This band is Monoteizm-Co-Existence. Now, I suppose the moniker is a bit odd for a gruff metallic crust band that sounds about as friendly as a charging hippo. I am sure the band had good intentions and meant "please everyone, let's not slaughter each other in the name of imaginary friends because that's kinda unhealthy and just insane" but I cannot help being reminded of the Coexist bumper stickers that I used to see in the States. Well-meaning but really cheesy and naive. Fortunately for you, the cheesiness in Monoteizm-Co-Existence (which will be referred to as MCE from now on) did not result in them playing folk punk or alternative reggae rock. Otherwise, this post would just be another nail in the Christmasy coffin. 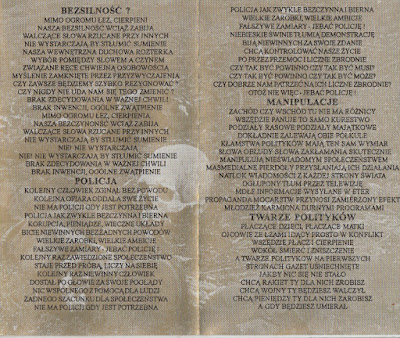 I know it is becoming like a running joke but I haven't been able to discover much about the band and most of the things I am going to assert below in a scholarly fashion are really just informed guesses. MCE were active in the second part of the 90's, a decade when crust ruled over Europe with an iron fist and a smelly armpit. They were from Kolno, a small town northwest of Bialystok (that's in northeastern Poland you ignoramus) and their first demo, entitled Oblicze Prawdy, was released in 1995 on Demonstracja Tapes, a Bialystok-based tape label (I am quite the investigator) run by Martin from Sanctus Iuda. Even a quick look at the discography of Demonstracja will show you that it was responsible for tape versions of records from the likes of Doom, Meanwhile or Agathocles, as well as demos from ace Polish crust bands like Hostility, Disgusting Lies and of course Sanctus Iuda. They even released two tapes from Sarcasm and if that is not a definitive proof of good taste, I don't know what is. Oblicze Prawdy was a rather rough and brutal crust attack with dual vocals reminiscent of Embittered, Money Drug or early Disrupt. The demo tape shows a lot of energy and anger and if you are a sucker for raw eurocrust like I am, I strongly recommend it. For some reason, I did not buy it at the Ultra Chaos Picnic festival although it was available and only got the second MCE tape. I don't remember why, I probably never will and needless to say that I feel very silly for this system failure. 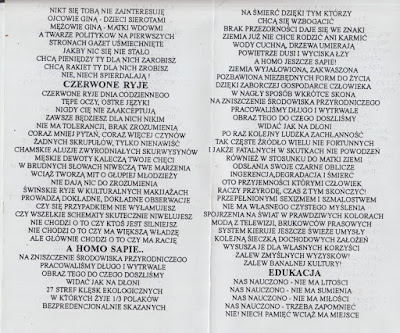 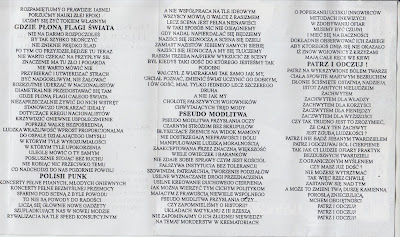 Some people prefer the first tape over the second one, and while I really enjoy it, my vote still goes for Patrz I Odczuj!. The band had improved since Oblicze Prawdy (I think Patrz I Odczuj! was released in 1998 but I am not completely certain) and there were some lineup changes as they welcomed a new bass player and recruited a new - female - vocalist. The sound became heavier, groovier and more metallic. Yes my faithful readers, you know where I am getting at, MCE were now playing raw metallic crust with dual male/female vocals, a common artistic practice in the 90's DIY punk scene and one I have been obsessed with since I first heard Nausea. As I mentioned the production is better in this second recording and I just love the dark, dirty heaviness of the guitar sound. It works great whether the band is in fast eurocrust mode or when they unleash their old-school crusty metal power, and overall the balance between both moods is amazing. The vocals are aggressive and raucous but not overly gruff, which gives the song a tasteful anarchopunk vibe (there are some overt anarcho musical references in a few songs). It is pretty obvious that MCE had been listening to a lot of Sanctus Iuda, Silna Wola and Homomilitia, but then I guess it is a pleonastic comment to even mention it considering the tremendous influence they had, while the crunchy metallic vibe that they injected into their crust recipe probably points to the cruelly underrated Hostility. Classic bands like Nausea and Hiatus are also major influences here and judging from the MCE's font, it is safe to say that you can add Extinction of Mankind to the list, which would account for the old-school crust streak running through their vernacular take on the genre. 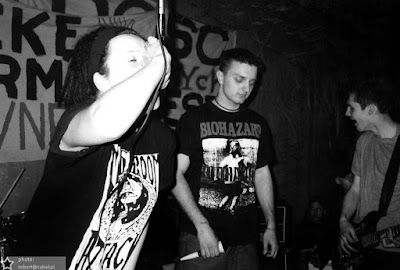 That's a picture from their '97 Poznan gig with Counterblast and Scatha... What a cracking lineup!

This is a top-shelf metallic crust tape and it is frustrating that I know so little about MCE. It was released on Malarie Records and you can still find this gem on distros for cheap (meaning for its real price). Wouldn't that make a brilliant Christmas present for 2019? 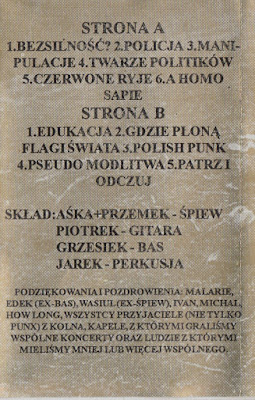 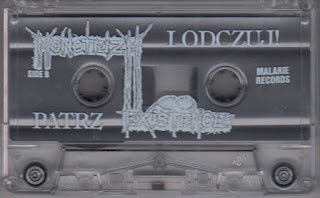 Posted by The Earslaughterers at 22:37