The idea for this modest series came to me while traveling in Poland last summer. I was at a DIY punk festival, pretty much in the middle of nowhere, not far from the Ukrainian border, called Ultra Chaos Picnic, an appellation that admittedly made me shiver with dread as I was half expecting to be trampled to death by a horde of drunks. All went very well in the end, as I evidently survived the fest, and there were many distros to browse through to my great delight. Most of them had been going for a long time which accounted for the presence of rather oldish records as well as boxes full of tapes dating back from the 90's (old stock indeed). There were quite a lot of them and I realized that I did not know half of the bands or labels involved. Most, if not all, of them were Polish, some of them demos, others proper tape albums, and all were very representative of that 90's DIY punk spirit that flourished in Europe at the time, and especially in Poland, that I am such a sucker for. Of course, the aesthetics looked very typical and defined by the time and place, if not generic, but then you could argue that a band's proclaimed timelessness is always an illusion and that all classic punk bands were all heavily conditioned by their social, political and cultural environment and products of it and that our critical perspective on a given band is also contextualized. If some genres sound dated and even corny today (like 90's crust and anarchopunk I suppose), I am sure you just need to add a layer of hip and edgy varnish to them to make them look "cool" and worthy of nostalgic longing again. I mean, just look at grunge now.

As I was trying to guess what the bands I was unfamiliar with sounded like (meaning that I was frowning heavily, a finger across my lips, trying to analyze the covers and understand what the bloke running the distro was mumbling), I was struck by a paradoxical thought. The past few years have seen punk tapes make a strong comeback in the punk scene in Western Europe and North America. While it is true that in some areas of the punk world, for structural reasons, tapes have never ceased to be a relevant format, they had pretty much vanished locally when I got into the punk scene in the early 00's. Local bands released their demos on cdr's because that was the relevant format then and that less and less people bought new tapes (this trend would increase in the following ten years to the point where many people no longer even owned a tape player). Cdr's were cheaper, it was a new, logical thing to do and we basically only used tapes to tape a record from a friend or a rehearsal. The only times I saw distros with large tape sections was when distros from Eastern Europe carrying Malarie or NNNW releases were around in Paris. It was always great since not only were we able to take a look at unknown bands with strange names we could not pronounce, but these distros also offered tape versions of bands like Resist or Oi Polloi or Detestation which were really cheap for us but still great quality with proper booklets and artwork. But it made sense for such labels and distros to deal with tapes because the format was still technologically and economically relevant and pertinent in their context at the time. Almost twenty years on and tapes are back on distro tables in an age of dematerialization and massive music streaming and it is both ironical and unsurprising that the trend came from countries where this particular format had lost all its relevance and convenience and was the stuff of old punks' war stories. If you were being literal, you could joyfully state that tapes never really disappeared, that they are still a meaningful means of sharing art because all the cool hardcore bands do tapes nowadays (both a cause and a consequence of their coolness) but the material reasons why they are doing so (trendy nostalgia for the 80's, the "charm" of the object, punk's accelerating intentional insularity and so on) are very different than those behind 90's DIY punk tapes. I don't mean to say that these are purer representations of punk. They just correspond to and serve different needs and purposes.

I am not anti-tape by any means, I still buy new ones and this is just a reflection (that could be applied, to some extent, to other formats or areas of punk). After all, there is a market for tapes, to be blunt, they are still pretty cheap to produce, nostalgia is a booming industry and there are some smashing new punk tapes being released every week, undeniably. But sometimes, in my darkest mood, I feel we are not that different from snobbish hipsters using Leica cameras to take pictures in 2018 in order to feel "authentic" and "unique". Oh well.

But I - largely - digress. Enough silly considerations about the economics and technological dynamics of the punk scene and let's get to the first tape of the batch. I picked six Polish punk tapes at this festival. Three of the bands I had never heard and three I was pretty familiar with. All the tapes were released between 1995 and 1999 and sometimes I haven't been able to find much intel about them which, if anything, proves that there are still untapped corners of the global punk scene worth investigating. The thing was that, according to my knowledgeable informers in the Polish scene, there were hundreds of crust/hardcore/thrash bands in Poland in the 90's. Literally. It was a thriving scene with many dedicated people involved, great turnouts and the amount of tapes released in this period is massive and as a consequence it is no wonder that some of these bands, two decades later, have sunk into obscurity. So let's just assume for the sake of my inflated ego that the six tapes I chose are meaningful if modest samples from the 90's Polish hardcore punk spectrum. And because it is Terminal Sound Nuisance after all, I obviously selected works that looked appealing and fitted the template: hairy fonts, nasty pictures of war and desolate imagery. 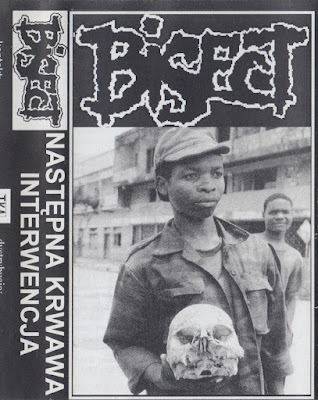 I had never heard of Bisect before getting the Następna Krwawa Interwencja tape and the element of surprise an mystery was welcome, since I rarely buy records from bands I do not know anymore (now that it is so easy to check the music online beforehand). I quite liked the name but found the gory picture of a child soldier holding a human skull pretty tasteless (but then, very 90's). What sealed the deal was the presence of a Hellkrusher cover on the tape. Yes, a cover of a 1992 Hellkrusher song ("Dying for who") recorded in 1995. Of course, I fell for it. Bisect originally hailed from Radom, a town located between Lodz and Lublin (roughly) and formed in 1993, with bassist Jancy being apparently the instigator. The first lineup included Jancy and drummer Wara (both formerly in Means of Control and the Wara also played in Homomilitia at some point) and Jaga on the guitar (from bands like The Corpse, Disgusting Lies and even Oi Polloi and Disorder). By 1995 the members had changed however with Jaga being replaced with Wasyl and the recruiting of two singers, Japko and Pieczara. Can you guess already where I am getting at? Two singers? Some dual vocal crusty stuff? Man, you are too smart for this game.

Despite the rather grindy aesthetics, Bisect were a metal-tinged crust act with dual gruff vocals and they would nor be out of place on a "90's Cavemen crust volume 2" compilation. It's not all that straight-forward though as the drummer is obviously very skilled and capable. From grinding blast beats to death-oriented double bass drumming to mean metalcore mosh parts, he manages to fit it all in more or less subtly on this recording but his technical abilities never overshadow the simple and direct crust formula (which is for better, no one wants to listen to technical cavemen crust, right?). There were a lot of top shelf crust bands in Poland in the 90's like Homomilitia, Sanctus Iuda, Silna Wola, Enough! so I am guessing that Bisect did not really stand out from the crowd at the time and even in retrospect, I suppose you could say they were quite generic in 1995. However, if you are looking for a solid, raw, energetic and honest typical 90's eurocrust band with a metal-edge and hoarse vocals, look no further (but realistically, if you have read this far, that's probably exactly what you are looking for). There are some heavy and groovy metallic breaks and intros but mostly the band rely on pummeling eurocrust to get their point across. I am reminded of mix between a rawer Toxic Bonkers, Hellkrusher and vintage Subcaos (especially in the vocals arrangements) and also, for some reason, of 00's Czech crust bands (like Dread 101 for instance). 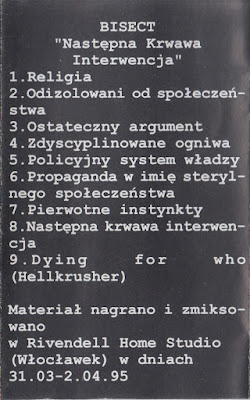 The band was pretty active in putting on shows in their areas in the mid-90's and they even recorded materials for splits with Diskonto and Stereofoniczna Pralka do Szycia (whoever they were) that sadly never saw the light of day. Następna Krwawa Interwencja was released on a label called TKA, based in Nowy Targ, that put on a couple of tapes 1994 and 1999 from Polish bands like Action Freedom or Alkochol Front and even a tape version of Disclose's demos and Extinction of Mankind's first album. The lyrics are of a political nature and are appropriately angry with topics ranging from Western imperialism, homelessness or religion in Catholic Poland (English translations are provided). Out of nowhere, Bisect reformed with a completely different lineup (made up of people from Poland, Italy and France) in Dublin in 2013 but I am not sure about the connection between the two incarnations of the band. 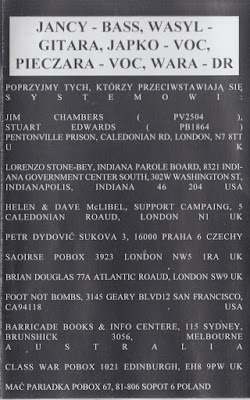 And by the way, the Hellkrusher cover is ace. 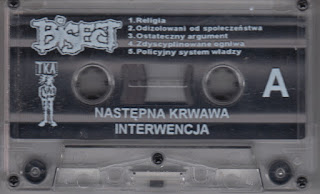 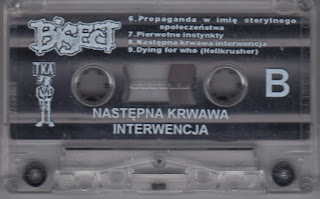 Bisect
Posted by The Earslaughterers at 14:06