Anyone who has ever been in a band (even a virtual one that never practiced and remained stuck at the "idea stage" like so many) will tell you the same thing: finding a decent moniker can be a nightmarish task. It is arguably harder in 2017, now that you can check on Discogs if the name was already used at some point by another band and realize that all the cool names have already been picked. How painful and depressing.

Judging from the number of bands called "Asmodeus", it is unlikely that this Japanese band really cared about the existence of similarly-named acts, which shows an admirable strength conviction and a fearlessness about being sued. Apparently, Asmodeus is a king of demons and he specializes in twisting people's sexual desires. I am clueless about demons to be honest but this information immediately made me ponder about two things. First, that I really should get back to watching Supernatural because it is a fun show with hot main characters (especially Dean), and second, that there must be dozens of black-metal bands with the name Asmodeus. After a quick search on Discogs, I discovered that there had been indeed quite a few of them and one in particular, from Austria, caught my attention since their page indicated that Azazel and Desdemon played in the band during the early noughties. I always find it deeply inspiring when old-school biblical demons like them remain invested in the evil scene and strive to use fresh, modern media in order to spread pain and suffering to a new crowd. Much respect. 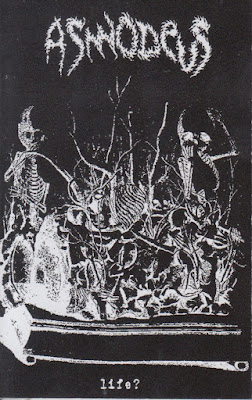 As mentioned, our Asmodeus are from Japan, Tokyo to be accurate, and although no incarnation of evil actually plays in the band (sadly), they are certainly one of the most solid crust bands that Japan has produced in the 2010's. I originally wanted to select twelve bands for this series, each one of them from a different country. But then, I really could not decide between Disturd and Asmodeus so I gave up and picked both bands. The presence of this specific Asmodeus recording can be seen as being somewhat erroneous since Life? was originally recorded and released in 2010 and the idea behind the series was to focus on crust works that are no older than five year old. However, it was properly rereleased on tape last year on Black Konflik Records, with one additional song, and I feel that this demo did not really receive enough attention the first time around. Well, certainly not from yours truly anyway. Before the reissue, I vaguely remembered seeing them mentioned on a message board, then hearing the demo (through soulseek probably), rather liking it but not quite enough to arouse my interest. Fast-forward to the summer 2016 and the news that a tape version of Life? was roaming in Malaysia. I promptly played it again and could not believe how good it sounded. Well, "good" reads inappropriate here for it would be more correct to write "how much to my liking" it was. Asmodeus' demo contained everything I love about crust music and, to my dismay, I still have not figured out why I was left unimpressed upon first bumping into it. I mean, they use the bloody Antisect font and the title of the demo is a direct reference to "Hallo there... how's life?", and normally this type of things guarantee unconditional, unequivocal love and support from myself. I felt like a traitor, probably just like a hardcore dude who's just broken his edge for half a pint of cheap lager. So from now on, I shall pursue the path of penance and flagellation to atone for my sins. Please, do not revoke my Crust Elite membership card. 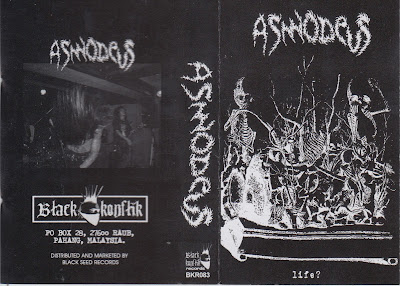 For a mere demo (but demos these days often sound as solid as Lp's), Life? is a brilliant work and releasing it again for a wider audience was the sensible thing to do. Apparently, Asmodeus was not the first band of the four members, as they all played in bands like Varaus SS (no need to tell you what this one was going for, right?), Stench Mass Genocide (called after a Sore Throat song, need I say more?), Babeldöm (great dark and fast crusty hardcore) and Buck-Teeekka (alright, that one is completely obscure but judging from a 10 year old youtube video with a shite sound, they were Confusish). Being an "ex-member of" is by no means synonymous with quality but in this case, you can tell that, even for a young band, they all focused closely on what they intended to create sonically. The band is often described as sounding like "Antisect, Axegrinder, Hellbastard and Deviated Instinct" and, while these particular references are far from irrelevant, they can be a little misleading. I would locate Life?'s creative matrix (I have not heard the 2015 Lp and therefore unable to pronounce on it) deep in a specific region of the SDS soundscape, namely In to the void. I am aware that the SDS comparison sounds a little lazy when dealing with a Japanese crust band but I cannot think of a more meaningful one. Asmodeus' overt referentiality to Antisect cannot fail to remind one of SDS' during their 90/92 era. Beside the font and the demo title, the front cover also includes plants with curves reminiscent of In darkness and the song title "Change tomorrow" is deeply rooted in the antisectish mythology in that context (without mentioning the many riffs of course). But rather than being straight references to Antisect (like Anti Authorize used), I would tend to think that they should be read as references to references to Antisect created by SDS. In other terms, they refer to antisectish referentiality and therefore substantially to SDS more than they do directly to Antisect. Know what I mean?

Life? conveys a great early SDS vibe, especially their mid-paced crunchy songs and the opening of "An abortion" is a wonderful instance of that with its super tight beats and its cold, dark metallic riffs that sound simple and yet just right. However, Asmodeus' guitar sound and riffing also points to later periods of SDS (Ameber and Digital evil) and to AGE in terms of texture and in its aggressively deranged and deformed thrashy sound. The band do not overuse it but whenever they do, it works marvelously. But what makes Asmodeus particularly stand out is not just their mastery of the "SDS sound" but also how they surprise the listener with unexpected breaks and changes of mood. The chorus to "An abortion" is surprisingly moody, the guitar takes on a melancholy tone and the bass line gets subtler and more complex, which strongly reminds me of Skaven's gloomy songwriting here. Did I see it coming? Absolutely not. But this inventiveness is Asmodeus' strong point as they achieve to blend other ingredients in their SDS crust pot. The song "闇" still builds on early SDS but this time with a mean and dirty Coitus-ish grinning chorus (how I wish more contemporary crust bands borrowed from the crusty squat crust of Coitus... but let's not digress) and vintage Deviated Instinct crunchy übercrust riffs. The following number, "虐待の連鎖", is faster and more rocking, not quite unlike Coitus at their beefiest again and even GISM (not a band I often find myself mentioning but there you go), with vocals that for some reason bring to mind Global Holocaust's for their hoarseness. "Change tomorrow" sees Asmodeus diving deep into Antisect/Axegrinder-worship with a riff respectfully borrowed from "New dark ages" and updated with SDS vibrance. It is a HEAVY song with a groovy, almost sensual hypnotic metal quality, and lovely additions of more evil-sounding backup vocals and a doom-metal break toward the end, making it almost reminiscent of Instinct of Survival at times. The last song on the tape, "生の渦" I believe, was not originally included on Life? but appeared on the Dfer cd compilation in 2012. The production is a little different, thrashier probably, but the songwriting has not changed in its conceptualization. The song starts like an Hellbastard riff fest with a heavy thrash vibe and then bursts into fast and somber Effigy-ish metal crust. This makes for quite a ride into Darkness. 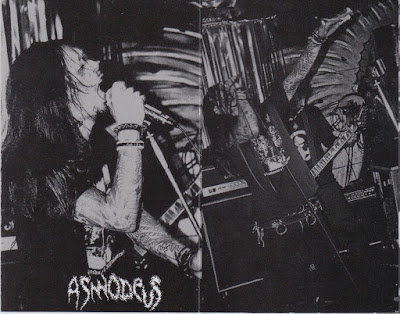 Overall the production on Life? is top notch and the balance between the instruments is exactly as it should be when you aim for classic Japanese crust. As I mentioned the guitar sound bridges the gap between SDS' main periods with a proud dexterousness while the sound of the bass is deceptively simple, without effects, not unlike Axegrinder and Effigy's actually, and delivers the compulsory groove to the whole. I am fine with the vocals, they are not overdone and at times the singer tries different things by tackling several crust repertoire. He does not necessarily nail it all the time but I appreciate the effort (I'm really being captious here). This delightful tape was released on Black Konflik, from Malaysia, a (mostly) tape label that has been focusing on (re)releasing top-shelf raw hardcore and crust for more than 15 years and is worthy of your support. I sadly have not got to listen to the Asmodeus Lp that was released on Strong Mind Japan yet (kind souls may leave a link in the comment) but I am crossing my finger well hard right now. 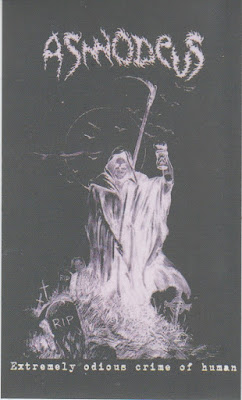 Terminal Sound Nuisance will be done with crust for a while since I need (for my sanity) to focus on things more tuneful in the immediate future. I am not sure what it will be yet. But there will possibly be another crust series with more good contemporary crust some time in the next twelve months. 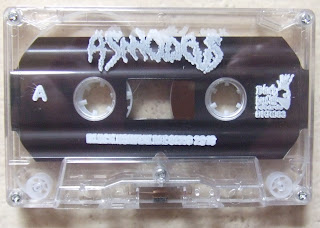 Posted by The Earslaughterers at 16:18