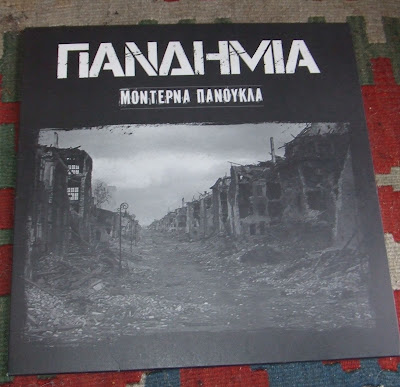 The last chapter of the Terminal Sound Nuisance Greek epics will deal with the the record that actually inspired it: Πανδημία's "Mοντέρνα Πανούκλα" Lp. It would be an understatement to say that it took everyone by surprise when it came out two years ago and that absolutely no one, apart from the local punks in Athens probably, saw it coming. In fact, no one even knew about the band until the album was released and, if it were not for its high quality, it would have been met with the same indifference that so many younger, "smaller" bands from lesser-known scenes experienced. In this day and age when so many records are released everywhere, we often tend to focus on familiar punk scenes that we feel deliver good, if predictable, punk-rock (say Portland, Malmö, Bristol or wherever you placed your trust) and dismiss the others. And a certain lack of curiosity doesn't explain everything, it is ironically also very hard and overwhelming to keep track of what is going on punk-wise. Despite means of communication that have never been so efficient, it sometimes feels like we are lost in an unreadable world of unfamiliar bands. Pandemia, like Arxi Tou Telou, were rightfully noticed because of the quality of their composition and certainly not because of any "ex-members" connection, unless you were really into Kalazaar or Räjähtää to begin with (again, things are different if you are local to Athens). 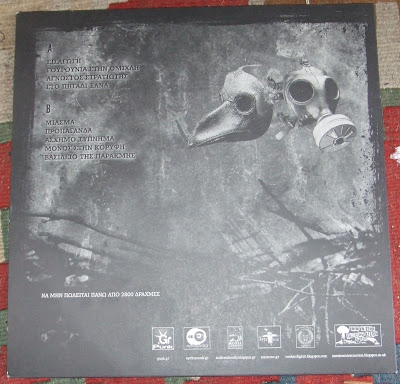 This work is very different from the previous four I posted and how could it not be? While Genia Tou Xaous, Gulag, Arnakia and Xaotiki Diastasi were essentially rooted in the early Greek punk scene (even though some of them reached their peak well into the 90's), Pandemia is decidedly a modern band, whose intent was not to rehash the classic Greek dark punk sound and go for all-out Ex-Humans or GTX worship. Given the context of the band's creation (they formed in 2008 but only recorded in 2013), I would argue that they were driven by the "postpunk" revival of the early 2010's, but not in the sense that they wanted to emulate sonically a trend that quickly, and sadly, became formulaic. Beside ripping off Skeletal Family, Vex and X-Mal Deutschland, the latest "postpunk" trend put an emphasis on moodiness and melancholy using bass-driven punk-rock and dark guitar leads, and although most of the recent postpunk bands didn't look to Greece for influence, Pandemia may have seen this as a chance to modernize and rebuild upon the old Greek dark punk sound by infusing it with a whole new bunch of influences. Or they just wanted to play dark punk music and went for it. The truth is probably somewhere between both. 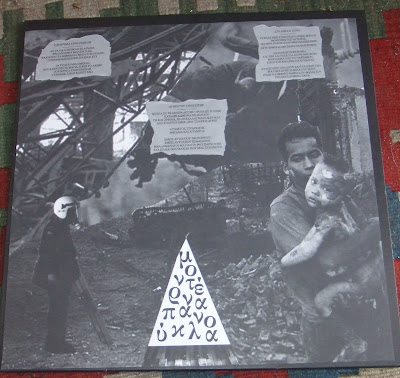 The most striking difference with the classic Greek punk sound is the thickness. "Mοντέρνα Πανούκλα"'s sound is heavy, almost oppressive, but not in a sludgy way, it feels more like an explosion of restrained frustration than an attempt to crush the listener. The guitar is far more present than on earlier Greek punk records as well and its sound more upfront. Some more or less well-meaning friends of mine (who shall remain nameless) argued that the sound texture of the guitar melodies reminded them of neocrust, and while I sensed some dismissal in such comments, they are not irrelevant as there is definitely an Ekkaia vibe to the guitar (not a bad thing as they were excellent at writing gloomy melancholy guitar tunes). Even in terms of the overall production (and indeed of aesthetics), the comparison holds to some extent as there is a relentless intensity that is not dissimilar to the early/mid-00's crusty hardcore sound. However, the songwriting itself is firmly ensconced in anthemic mid-tempo punk-rock and, seen in that light, Pandemia's Lp is clearly a new fascinating chapter in the Greek dark punk sound. 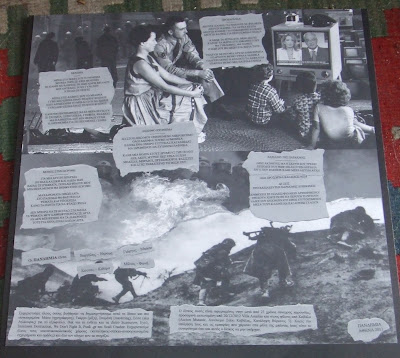 The Lp is suffused with catchy bass lines that, albeit a tad overshadowed by the potent guitar leads, progressively make more sense listen after listen. The vocals are aggressive, almost threatening and raspy but they still convey a similar sense of fighting despair, of anger in the face of alienation. Like with all the others classic Greek punk records, the moods are pretty diverse on this Lp and the music is always a tool to express them (and not the other way around and that is a crucial point in the songwriting). From open doom and gloom, to frustration, melancholy, outrage, hope, foreboding, urgency... "Mοντέρνα Πανούκλα" aptly reflects them all while remaining a cohesive unit. Musically, I would argue that the production makes it sound angrier and more raging than the other records of the series (not unlike Adiexodo perhaps), but it would be relevant to point out that the particular political context in Greece at the time of the recording certainly incited the band to go for a more tense atmosphere. Modern sounds for modern times. All the elements that characterize the classic Greek dark sound can be found in Pandemia's Lp (the smart lines on the bass, the guitar leads, the variety of drum beats, the desperate yet beautiful vocals...) but they have been updated, so to speak, so that it really feels like the band was not paying a tribute to the older generations (strictly speaking, it is not a referential Lp at all) but rather, used the essence of the 80's sound, recreated its shapes and made it genuinely relevant again. This is a rich Lp that can appeal to many. It brings to mind old anarcho bands like The System, Stalag 17 or Virus, late Peni, acts like Part1 or Nerorgasmo, but also brooding, modern dark hardcore bands, and even No Hope for the Kids. 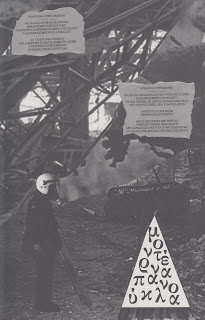 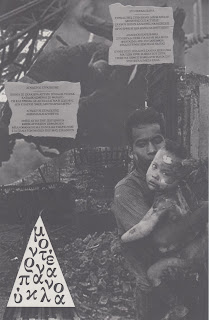 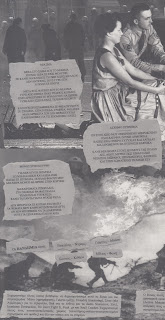 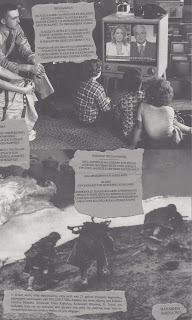 In true DIY fashion, "Mοντέρνα Πανούκλα" was the result of a collaboration between six record labels, the excellent Scarecrow records, Scull Crasher records, Eye5 records, Punk.gr and We don't fight it records from Greece, as well as Imminent Destruction records from the UK. Pandemia unfortunately split up but their follow-up, the split Lp with fellow dark punks Era of Fear, from Xanthi, is also worthwhile and probably closer to the classic Greek sound with a distinct emotionnal influence (I never thought I'd be writing this, but there you go). 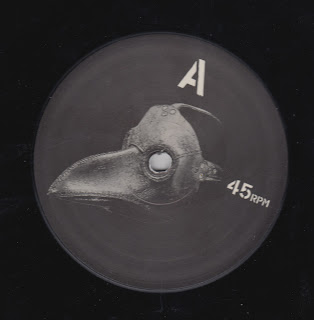 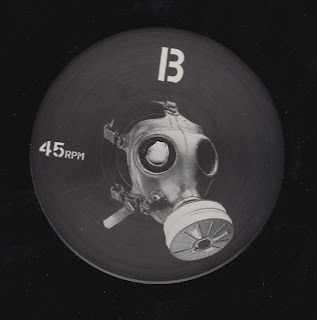 Pandemia
Posted by The Earslaughterers at 17:05