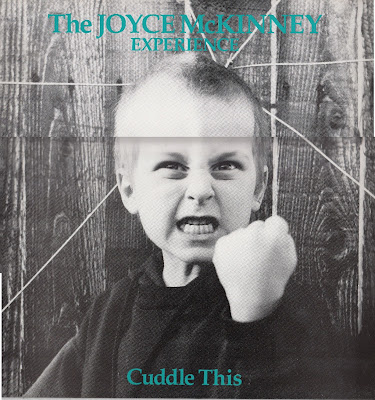 I sometimes wonder if unconventional band names and graphic identities are actually meant to test us and challenge our prejudices (as unprejudiced we like to think we all are as punks). Each punk trend creates its own codes and norms, so that when a band stands out people either tend to discard it (consciously or not) or, on the contrary they can be drawn to it (if only for the sake of boasting a position of "nonconformist"). Rubella Ballet was a prime example of a band with a genuine personality that set them apart aesthetically from their peers while at the same time completely embracing the anarchopunk values. It nevertheless took me some years to get used to their colourfulness and their outrageous use of day-glo and I still blink when I look at the cover of "If" and "Arctic Flowers".

Along with Dan and their colourful cat-themed artworks, Joyce McKinney Experience used to be a band I was suspicious about although they were part of this mid-80's British hardcore punk scene I love so much. The fact that their name referred to an American girl (Joyce McKinney) who abducted, chained to a bed and raped a Mormon priest in the 70's almost overshadowed the absence of skulls, wastelands and grim reapers from their record covers. JME were from Leamington Spa, hometown of The Varukers, but also of Depraved/Visions of Change and Bad Beach, two bands JME shared a very close connection with. So close in fact that at some point not only did Visions of Change and JME share two members, which obviously must have made it easier to go on tour, but Sharon from JME and Ian from Visions of Change were even married at some point. Talk about a close-knit scene. 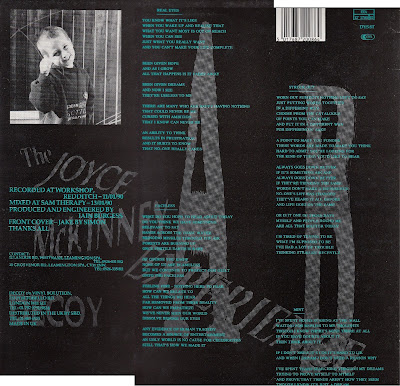 JME formed in 1986 (I guess) and managed to hold it together until 1992. In the midst of a UK scene then roaming with speed freaks or fetid post-apocalyptic madness, JME were a breath of fresh, if cider-flavoured, air. Saying this, it was not all doom and gloom music-wise during that time, especially in Leamington where Depraved perfectly embodied the powerful British version of US hardcore and then, as Visions of Change, pioneered organ-led (yes, organ, like in the strictly-prohibited-instruments-in-punk) positive hardcore punk and Bad Beach worked their own original brand of heavy weirdo hardcore. But I feel JME were the best of the lot and I dare say that they were probably the catchiest band in the Kingdom at their peak. Their music was upbeat and tuneful but also really energetic and snotty. Certainly enhanced by the presence of two great female singers, JME borrowed the energy and the guitar hooks of American hardcore and blended it with that specific brand of female-fronted anarchopunk. If Lost Cherrees, Rubella Ballet or A-Heads had been into Bad Brains, it would have sounded something like JME. 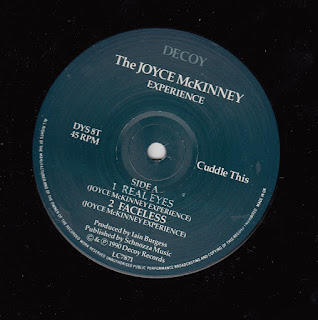 Prior to this 12'' released in 1990, JME had already had out a few records out. They appeared in 1987 on a brilliant 4-way split Lp along with Incest Brothers (crazy and fast hardcore), Decadence Within (with top songs from their classic anarcho period) and the sadly underrated Nox Mortis (moody anarchopunk at its best) entitled "Shall we dance?" and released on Meantime Records, one of the most remarkable record label of this period, founded by Dan's bass player, that also released their Lp, "Joyce offspring", in 1988. The following year, a JME Ep, "Boring rock", saw the light of day. "Cuddle this" was therefore JME's last record although the band did record two subsequent demos in 1992 when they briefly reformed. However, as catchy as they might sound, those last recordings definitely belonged to the dreaded realms of "pop-rock" and had more to do with a sunday night spent eating ice-cream on your own than a sweaty and boozy hardcore all-dayer if you know what I mean. "Cuddle this" happens to be my favourite JME's release as it saw the band at its catchiest and most melodic. While I understand Glasper when he says in Trapped in a Scene that it somehow lacks the grit of the Lp, I personally feel that "Cuddle this" was JME's crowning record. The vocals are perfect, not as snotty as before, but a bit moodier (or even poppier really) perhaps, and yet the music lost none of its contagious energy. This is quality punk music that everyone can enjoy, though probably not for the same reasons. 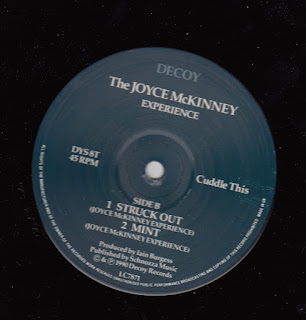 It is always difficult to evaluate in retrospect the influence that bands have had. The first time I heard JME (that was through the highly recommendable Boss Tuneage double-cd discography from 2006), they instantly reminded me of Harum-Scarum's second Lp, "Suppose we try". In fact, I am quite sure that they must have listened to quite a bit of JME when they wrote the songs for that Lp in 2001. More generally, I feel that these late 80's female-fronted UK bands, that were tuneful, energetic and intense, such as JME, Dan or Sofahead, may have had a significant influence on the female-fronted anarchopunk bands of the 90's that were aggressive and yet with good tunes, like the aforementioned Harum-Scarum, Mankind?, Burning Kitchen, maybe even Post-Regiment or La Fraction, or in more recent years bands like Signal Lost, and the important Meantime Records connection (and, in Dan's case, the Profane Existence one as well) could have played a role in spreading the word. Or maybe it's complete bollocks and all these bands had never heard of JME and I'm a deluded bastard and it is all a matter of common artistic sensibility.

Or could there be some time-traveling involved????????