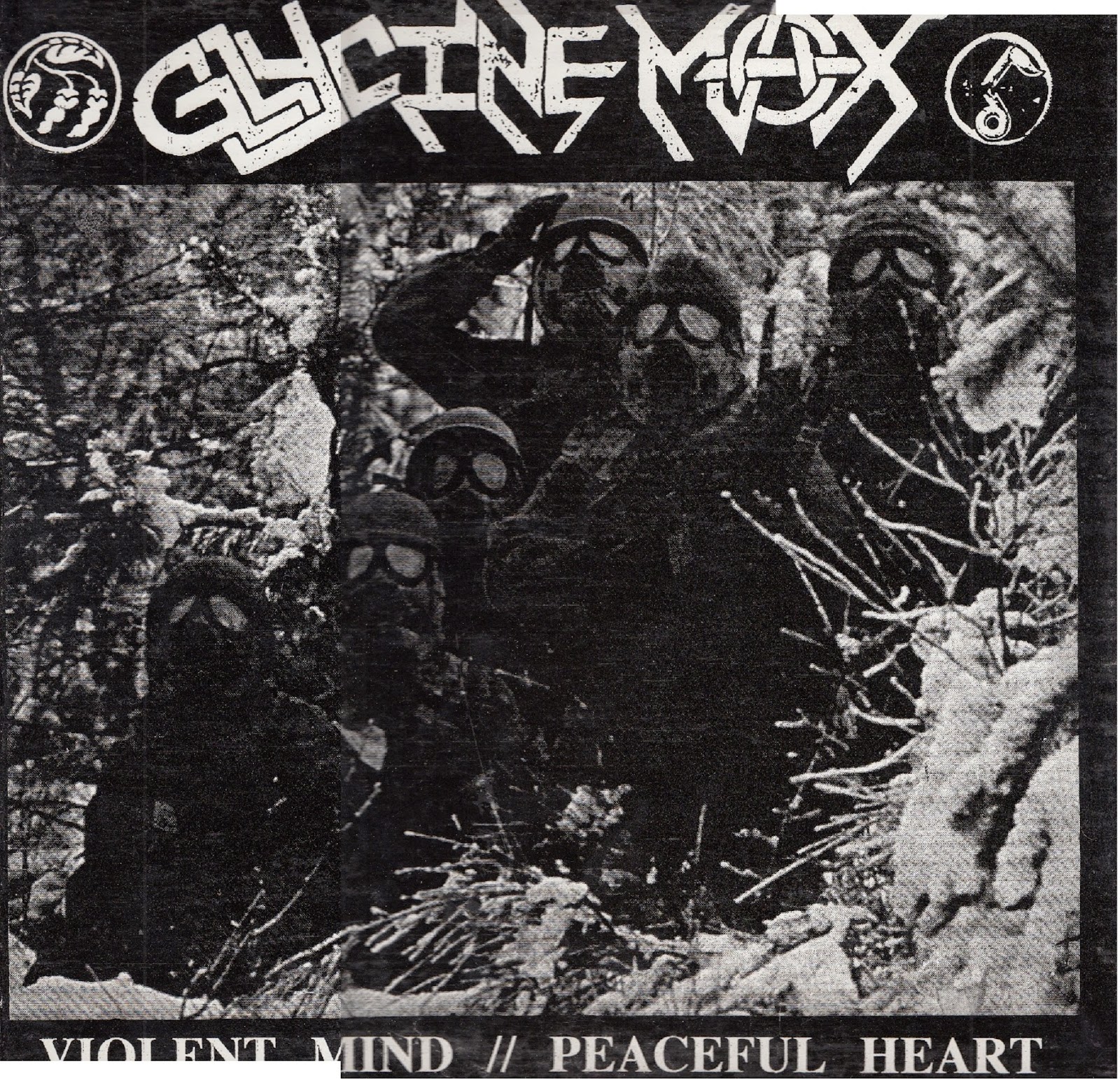 Really, how can you go wrong with a band paying tribute to Antisect and Sore Throat in their logo? Exactly. You can't.

Glycine Max crossed my mind a few days ago while I was looking for obscure and yet quality punk covers for the legendary Détruire l'Ennui radio show. We do a "punk covers special" at least twice a year and I always try to pick songs that are both little-known and likely to kick some ass. That was also an opportunity to play the Lp at home and realize how bloody brilliant it still is and how tragically overlooked the band remains. And of course, I played their Body Count cover yesterday (funny to think that this very same song has also been covered by Armistice, a band that came from that Californian anarchocrusy scene as well). 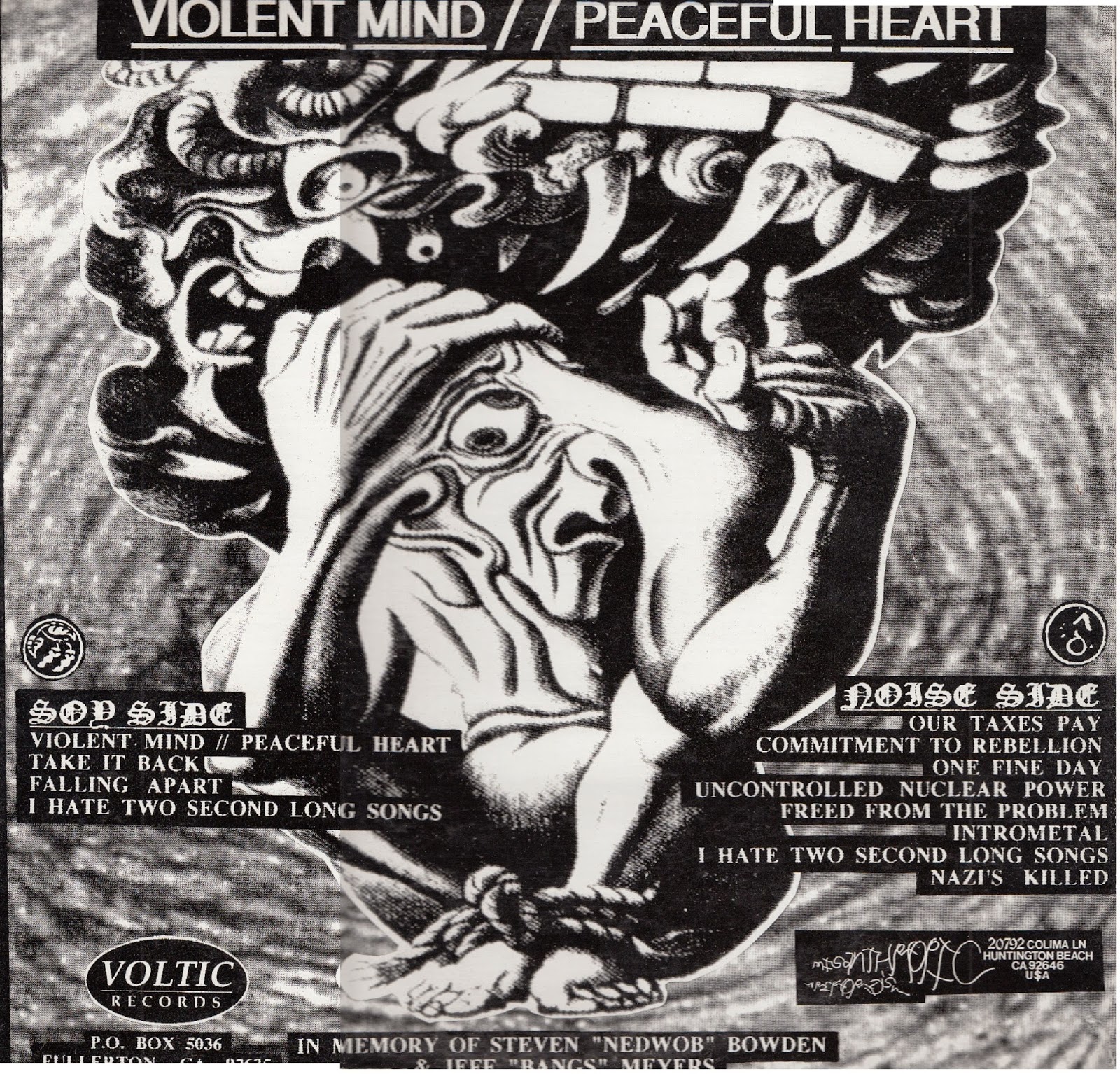 It never ceases to amaze me, in a rather negative way, how the early Californian crust wave has not profited from the 2000's stenchcore revival. In fact, this scene has remained largely ignored by the punks who discovered (or re-discovered) all the fantastic UK crust bands through modern acts such as Hellshock or Stormcrow. While it is not a rare occurrence to spot crusty punx sporting Axegrinder, Sacrilege or Deviated Instinct paraphernalia at festivals, I very seldom, if ever, see anyone with Apocalypse, A//Solution or Glycine Max patches. There could be several logical reasons for this discrepancy. After all, the Californian crust scene has been less prolific than the British one and therefore has had less influence globally throughout the years. You could also argue that these US bands were, to some extent, only trying to recreate what their UK counterparts had been doing for a couple of years and one usually has a higher opinion toward the originators of a genre (although the birth of musical subgenres can never really be tied to the bands only as there is a whole specific cultural context that precisely makes the appearance of a new genre possible, but that's another debate entirely). Finally, one could venture that the Cali bands involved in the late 80's and early 90's have had little influence over the mid/late 90's American crust acts themselves that were less metal-sounding and faster (more Swedish, less British perhaps?). If Nausea, Disrupt, Misery or even Destroy! remained classics, and not only in the States, it seems the Californian wave hardly managed to get out of California. 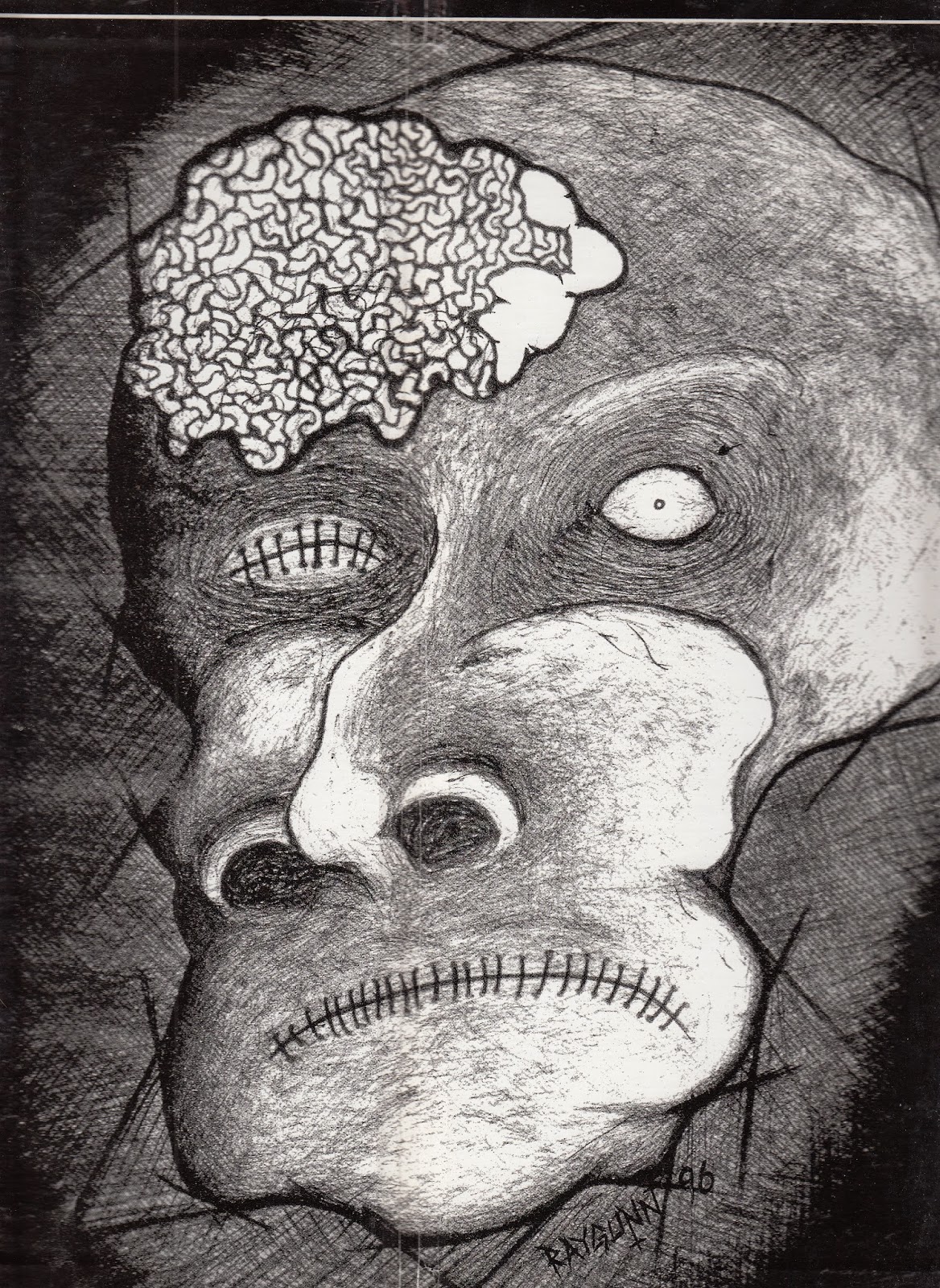 I have already ranted over the Californian scene in previous posts when dealing with Mindrot, Resist and Exist, Iconoclast, Skaven and Dystopia so I will try to not repeat myself too much. In their lifetime, from 1986 to 1991, Glycine Max only released two demos with a rather crude sound that had more to do with fast and raw hardcore punk than with mid-tempo crust punk. The first four songs on the B side of this Lp are taken from their second demo (from 1989 I believe) and show the band in a "peacepunk" mood (let's stick with the local term!) akin to Iconoclast, Diatribe, Body Count of course, early Antisect or early Legion of Parasites. It is good political hardcore punk to be sure but the real nuggets are to be found on the A side of the Lp. These were recorded in late 1990, at the height of the band's power and are vintage, classic crust anthems. Apocalyptic, dark mid-tempo metallic punk with a lot of personality (the terrific voice of the singer really helps) that brings to mind Hellbastard, Amebix or Axegrinder and fellow Californian crust heroes Apocalypse and A//Solution. Top of the shelf stenchcore indeed. The last four songs on the B side were also recorded in late 1990 and see Glycine Max in the same top-notch crusty shape but in a live environment at Gilman Street this time. The icing on the cake is the final Hellbastard cover, "Nazis killed", which, despite it being a 24 year old live recording, is easily the best Hellbastard cover I have heard so far (I will grant you that there aren't too many competitors in this category). To top it off, Glycine Max wrote great lyrics. The words to the song "Violent mind, peaceful heart", about social alienation's paradoxical effects on our own feelings and psyche, go so well with the angst-ridden tunes that the song, to me, is a prime example of a meaningful merging of shape and content. In addition to songs about similarly dark topics (see "Falling apart"), you will also mind more traditional anti-state protest songs that will make you angry and, hopefully, happy as well. 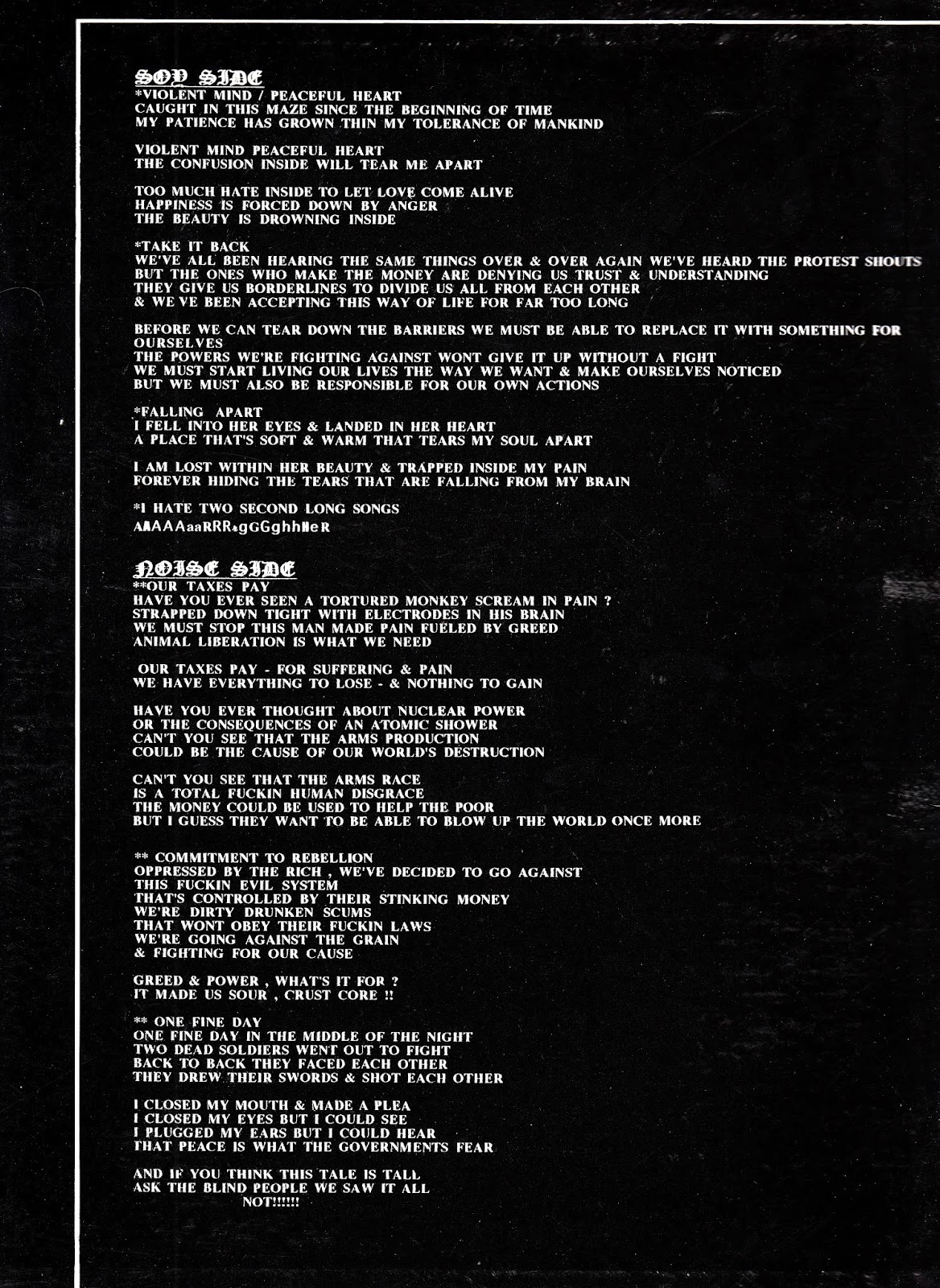 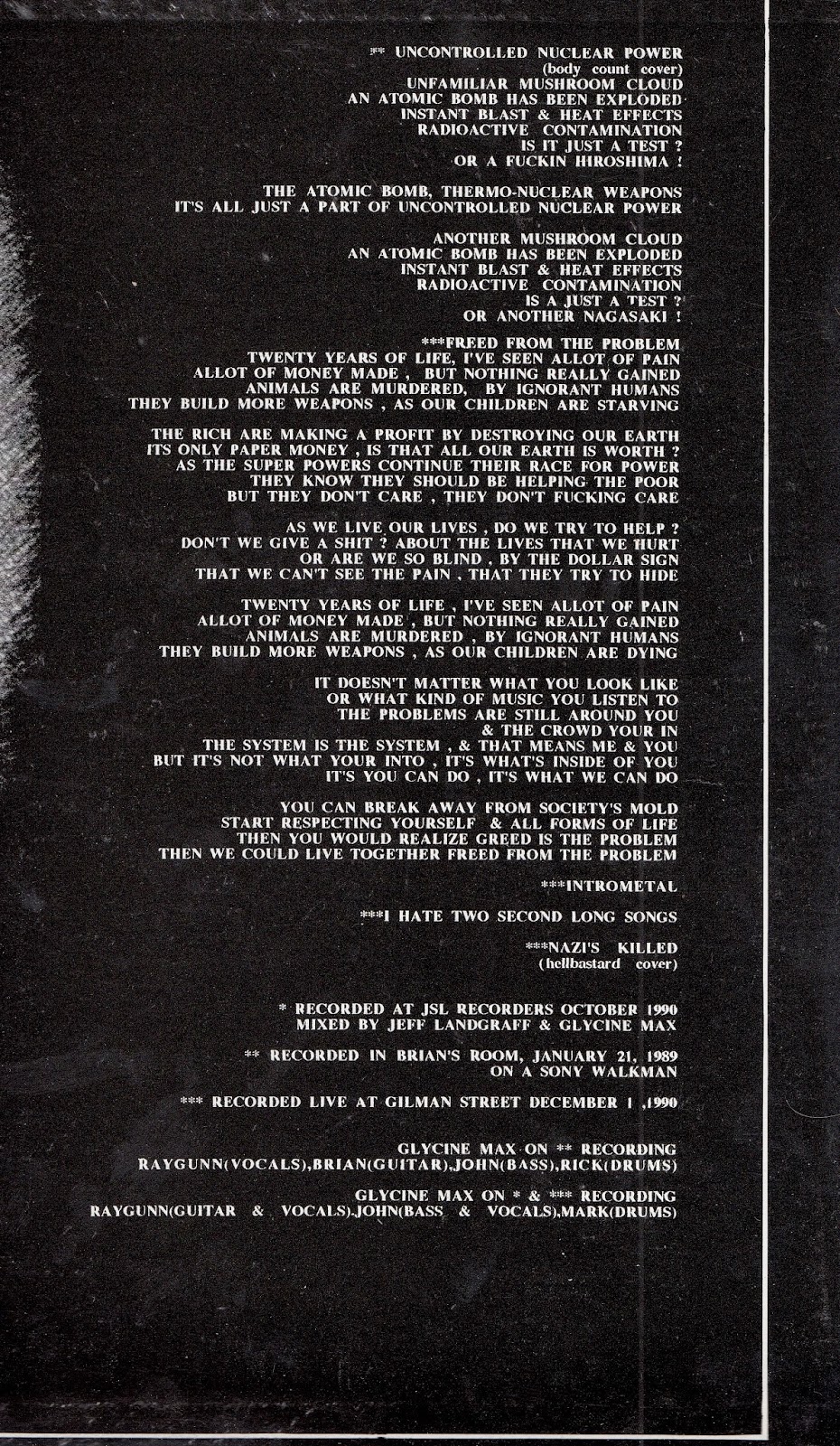 I am pretty sure that the four songs on the A side were meant to appear on a proper Lp at the time but I guess the band split up before recording the other side. That or it took six years for the labels to actually release them but that sounds a bit unlikely. By the time the "Violent mind // Peaceful heart" Lp saw the light of day, Glycine Max was sadly no more, a fact that might also account for the band's current anonymity. A fucking shame that should have been alleviated five years ago when a cd compilation with tracks from the demos and from the Lp (minus the live songs for some reason) got released. As a self-appointed nerd, it should be pointed out that the Lp studio tracks appear in slightly different versions as the quotes used as intros to the songs are not the same (digression: have you ever noticed that Scatha used the same Exorcist quote on the first track of their second Lp?). But enough digression, the cd was released in order to support the family of Glycine Max's drummer Mark (he also played in Apocalypse and Scarred for Life) who had sadly just passed away. This is a great cd and it can still be found for cheap so if you have any faith in genuine CRUST music, then do yourself a favour. The Lp was originally released on Misanthropic records, a Dystopia-related label that I already mentioned in a former post entry, and on Voltic Records, a short-lived project that released only two records (the other one being... an A//Solution cd!). 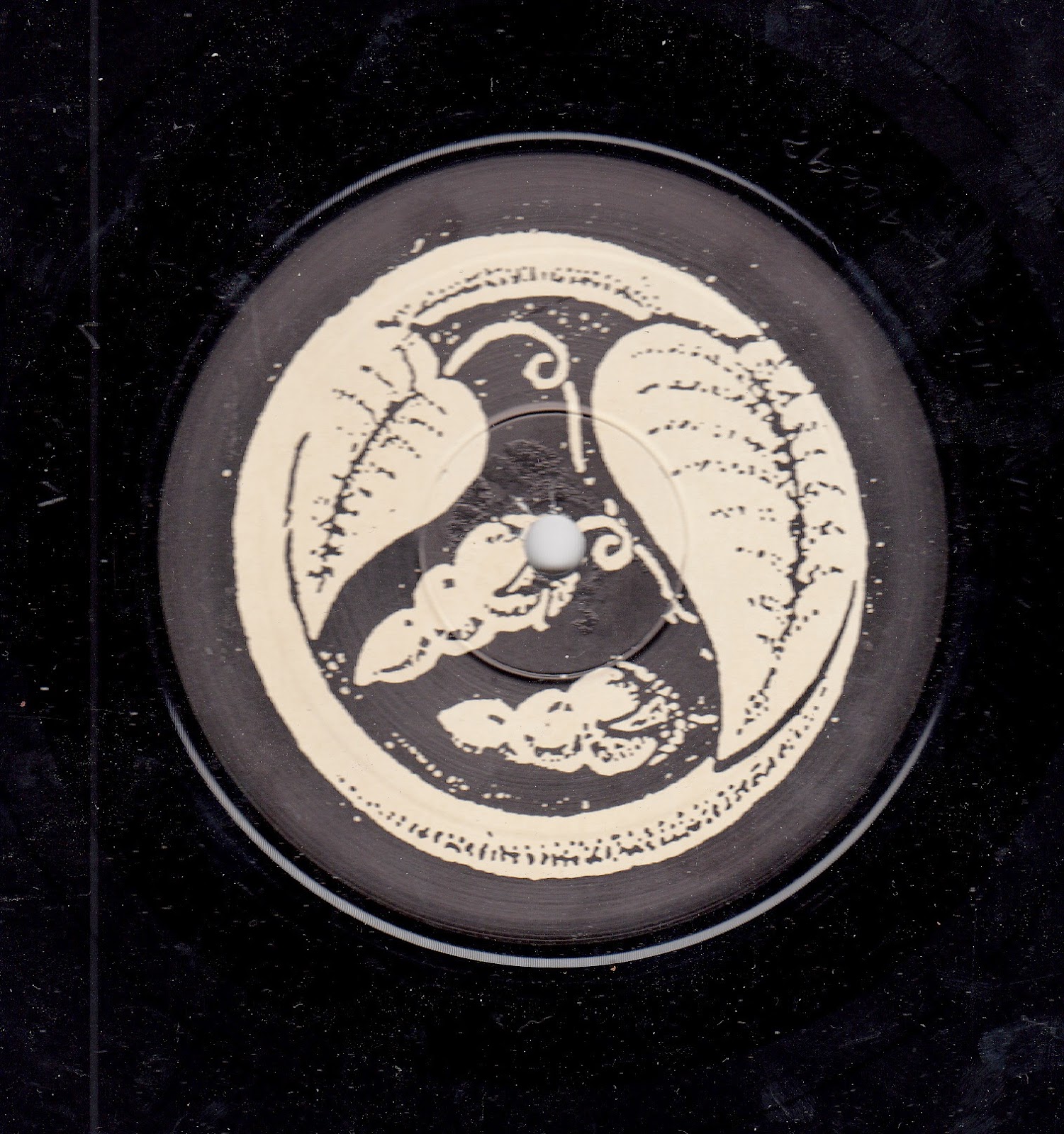 After the demise of Glycine Max, the singer Raygunn along with drummer Mark formed the excellent and underrated Final-conflictesque Scarred For Life (he also played in Dogma Mundista), while bassist John eventually played with Beat To Death. 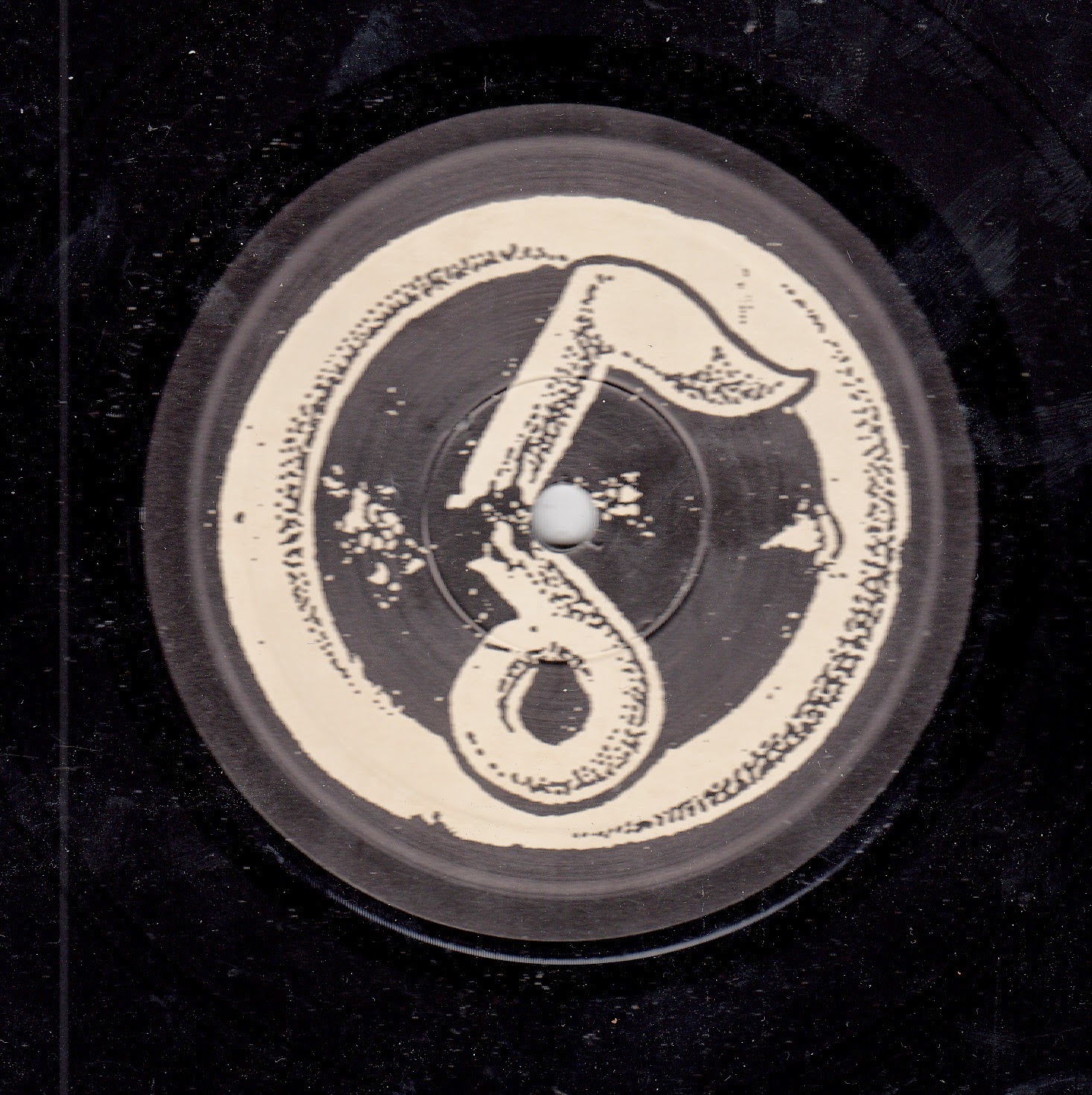 Posted by The Earslaughterers at 18:50