It often happens that I buy records I completely forget about. When I flip through my collection, I feel a bit sorry for these forgotten records because I hardly ever listen to them (but then, a lot of them are rather forgettable). This is one of the fallen soldiers and for once, this is going to be a short post because I don't have much to say about the bands, but honestly you are unlikely to meet someone who does (unless he or she was a member or a mate of the bands of course). As anecdotal as these bands might have been, it doesn't mean that they are worthless or even that they deserve this anonymity. We all know hundreds of bands who will always remain shrouded in a desperately indifferent obscurity. It is sometimes hard to explain, sometimes not so much. In the case of Skullkrusher and Article Nine, the reason is quite easy to find as both bands were quite generic and played a genre that was probably a little overdone in the late 90's/early 00's. 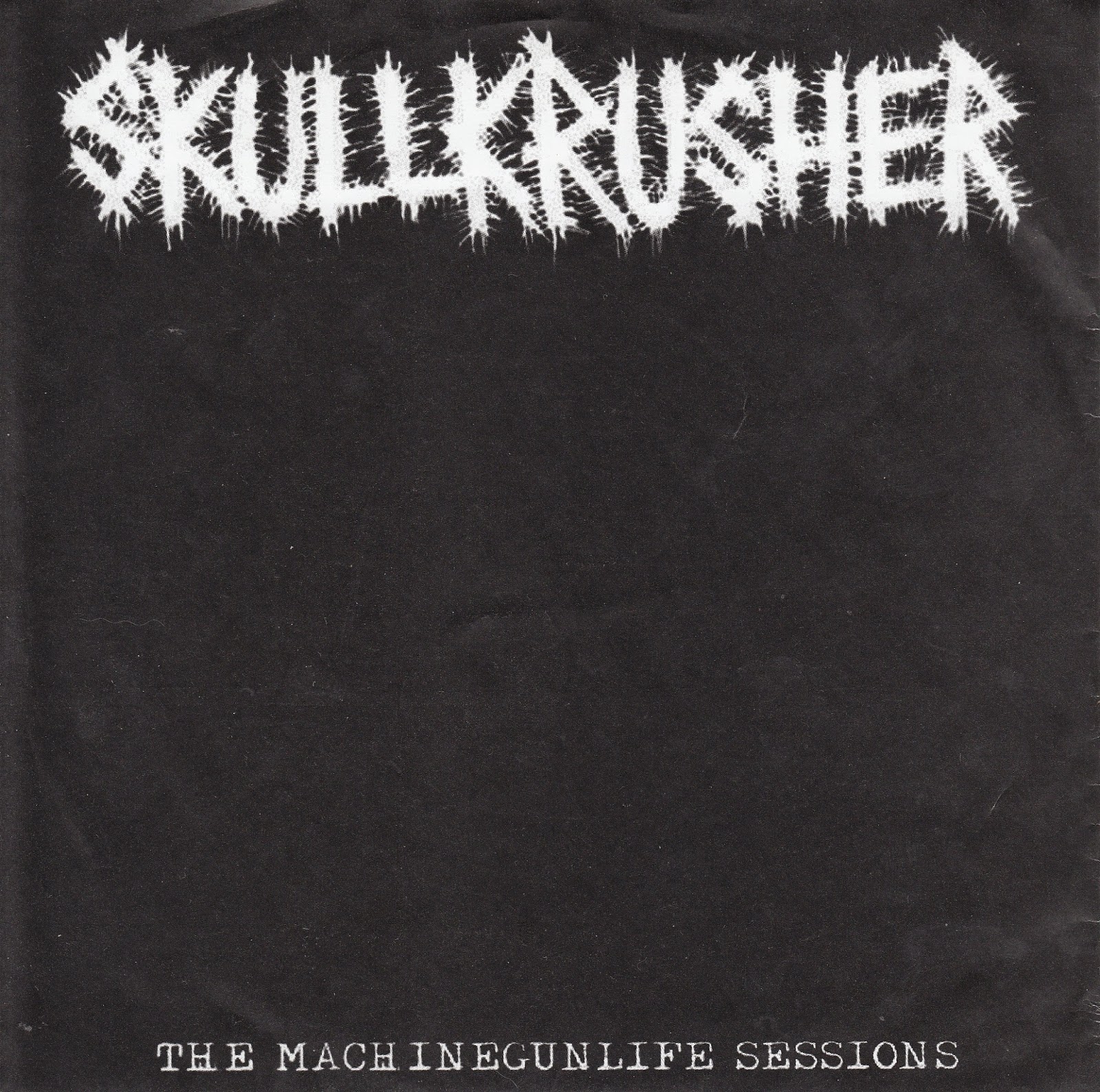 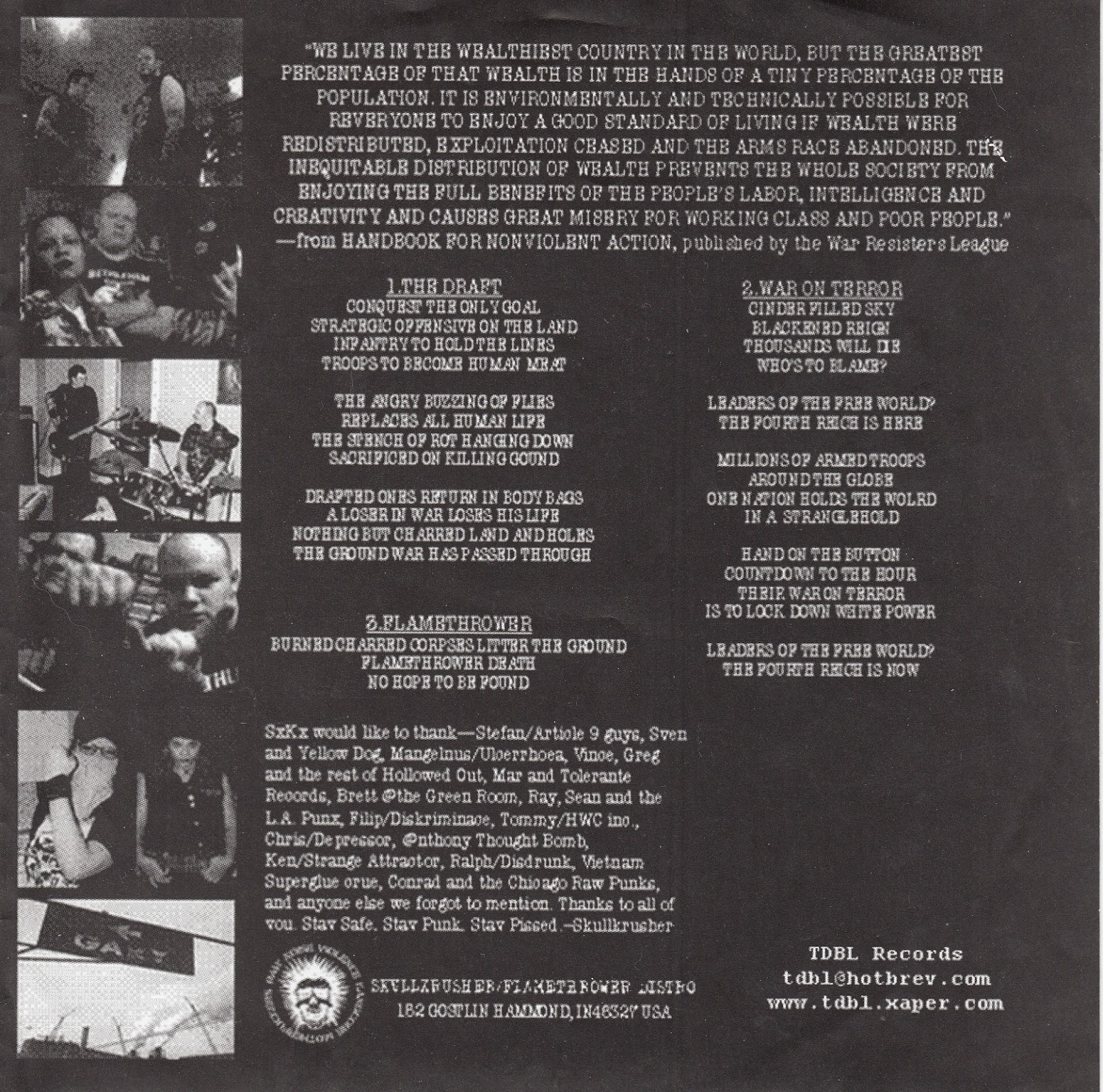 There is already a pretty good review of this Ep on the Aversion website (here) if you are interested in another opinion than mine (although I don't really see why you would to be honest). Let's start with Skullkrusher. They certainly picked a cool name but they certainly weren't the only ones either. There was a Brazilian metal band with that name and I think there's a band from Malaysia also playing the crusty d-beat thing working under that name. For the unwashed among you, Skullkrusher is obviously a reference to the mighty Onslaught song "Skullcrusher" and, I would argue, Hellkrusher. Fortunately to those allergic to lengthy guitar solos and lyrics about Satan, Skullkrusher are much closer to Hellkrusher than to Onslaught. What we have here are three songs shamelessly flying the d-beat flag and despite the utter unoriginality of this subgenre, I feel that it works very well here as the band didn't fall in some of the obvious Dis-traps. First, the sound is not too heavy and is metal-free. This is d-beat for the punx and that's how it should be. Second, the production is raw and spontaneous. I don't want too clean a sound when the D is beaten but I also personally tend to avoid overly blown-out, overdistorted rendering of the genre, not because I dislike it, but because few bands can actually pull it properly. Skullkrusher do it naturally, in an unpretentious fashion with the 90's feel that I enjoy. Early Disfer, Dischange, Hellkrusher, Decontrol, Besthöven, Holokaust are relevant points of comparison here. The presence of two types of vocals adds a bit of variety and aggression, the bass is adequately buzzing and upfront, the guitar riffs are simple and to the point (I even hear some Anti-Cimeish overtone here and there) and the drums, well, you already know what they do and they do it properly. Skullkrusher were from Chicago and released quite a few tapes between 1996 and 1999, so I am guessing they must have been pretty active at this time. These three songs were originally part of a tape called "The machinegun sessions" but I am not sure when it was actually recorded. 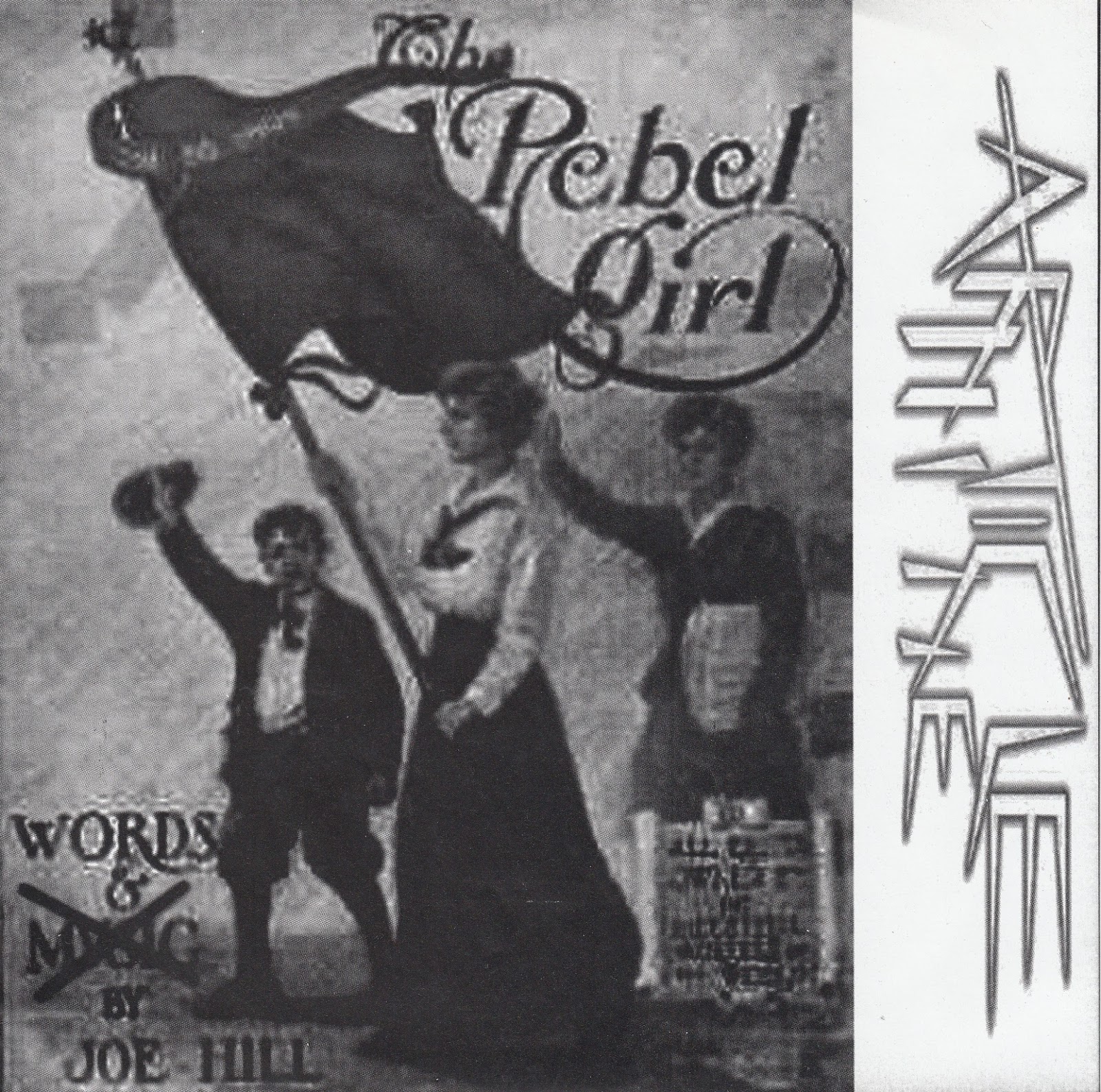 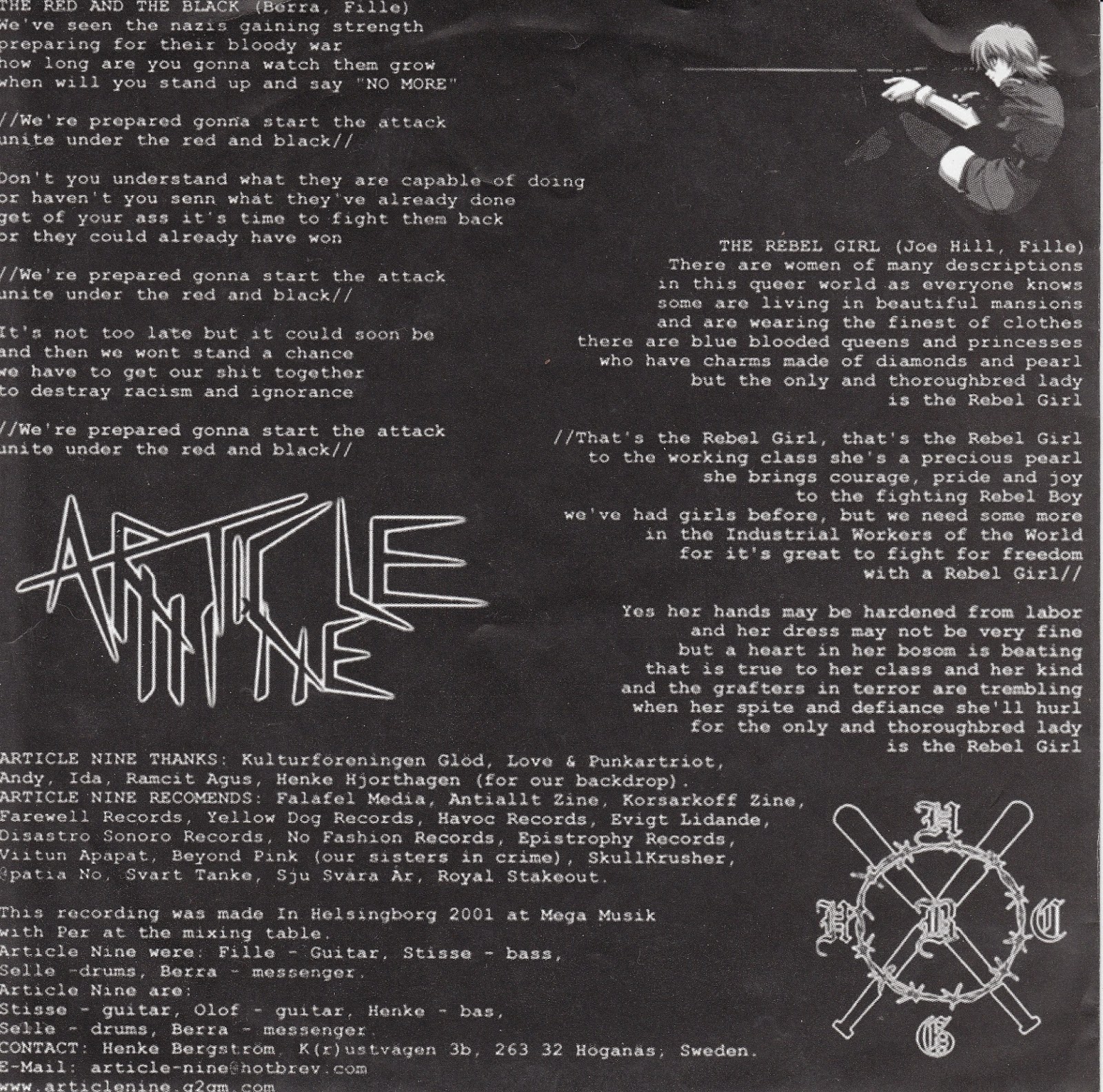 On the other side, we have Article Nine from Sweden and with them we enter the 90's Swedish crust realms. Two songs of fast, pummelling and heavy scandicrust with a couple of death-metal guitar leads, you know what to expect. This reminds me of Skitsystem though the vocals are nowhere near as harsh. Interestingly, the lyrics are not about war or destruction but clearly lean on the anarcho-syndicalist side of things with references to the red and black flag, antifascism and to the IWW. In fact, the song "The rebel girl" was written by Joe Hill, a Swedish-American itinerant worker, an anarchist labour activist and a member of the IWW who was framed and executed in 1915 for the murder of a local politician. The geezer wrote a lot of political songs and was a cartoonist for the IWW (the cover on the Article Nine's side is a reproduction of an ad for Joe Hill's song). From what wikipedia says, "The rebel girl" was written for a comrade of the IWW, Elizabeth Flynn, who was a strong feminist and advocat of women's rights. Clearly quite a refreshing cover for a crust band. This Ep was not Article Nine's only mischief, as they also did a split with Human Bastard and a full Ep during the first half of the 00's. A member of the band also played in Vaning 5 and went on to play in Massmörd. 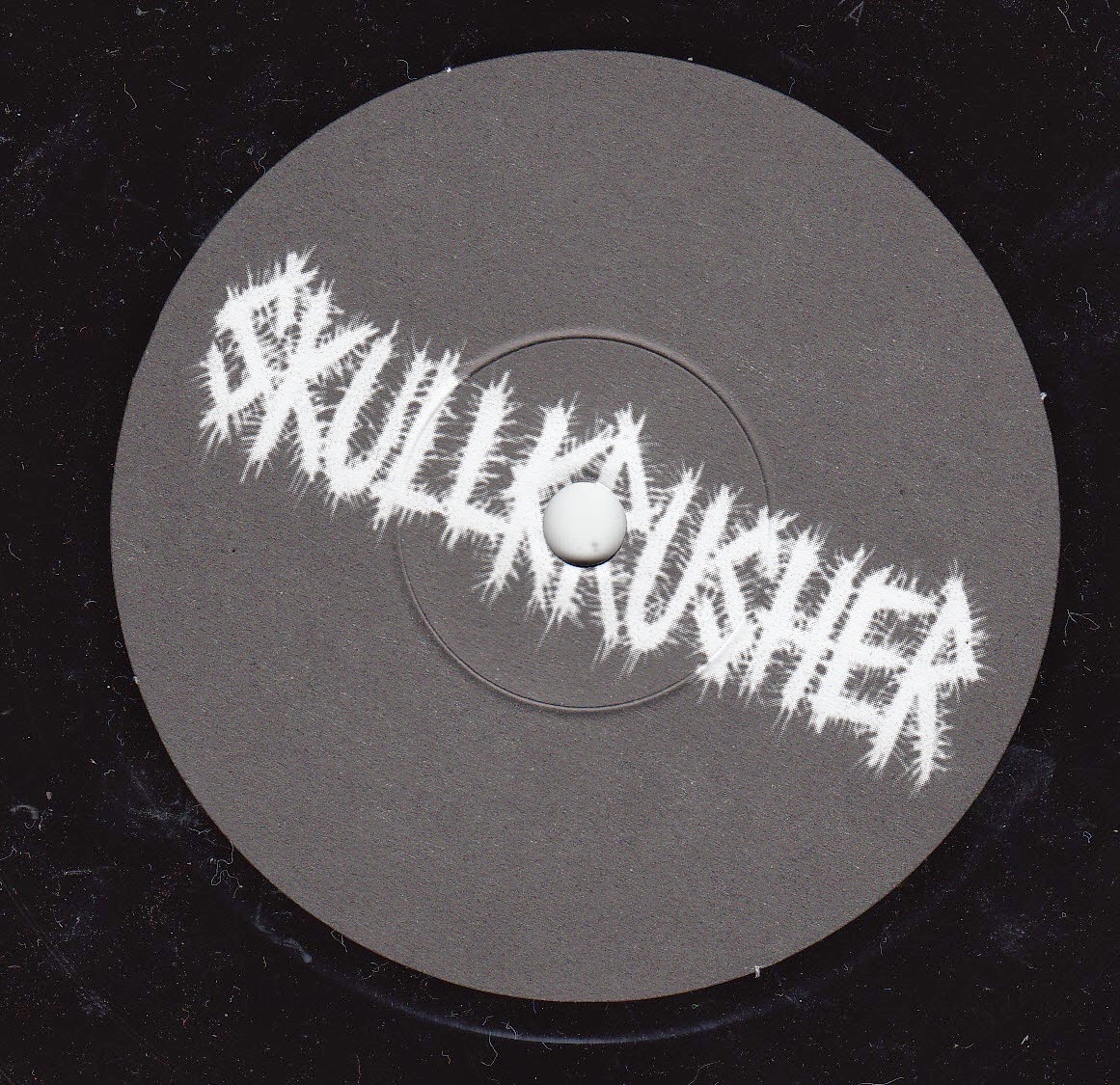 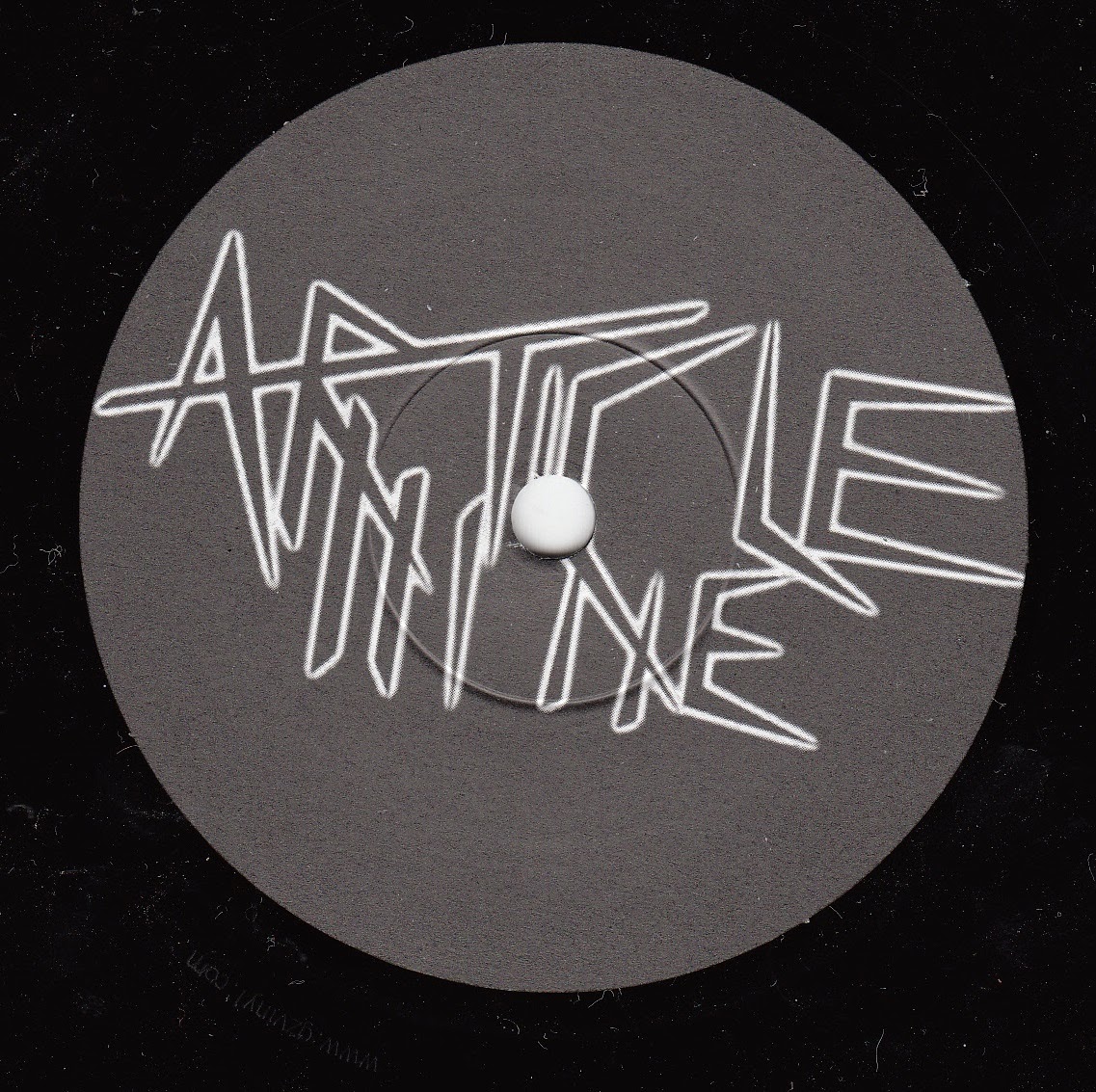 So come on, give them a chance!

Posted by The Earslaughterers at 17:20