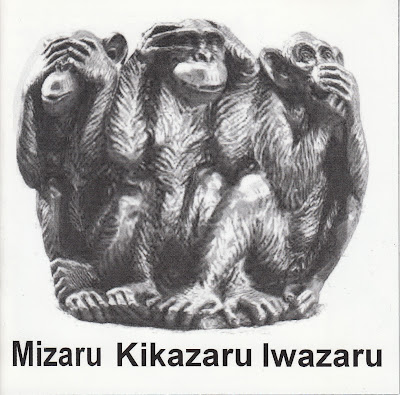 No, in spite of its title, this record isn't some rare Japanese comp, but I wouldn't be surprised if the intent behind the name was to attract the nerdiest species of the punk spectrum. Judging from the cover, it is safe to assume that "Mizaru kikazaru iwazaru" means "Hear nothing, see nothing, say nothing", which somehow rings a bell. Hardcore punk from the West Country and Wales is what you are getting here, with no less than 6 bands and 19 songs of fast and pissed punk music played with heart and bollocks from the 2000's. 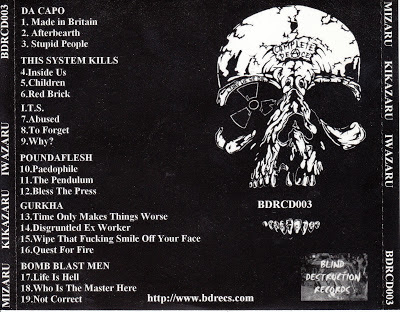 For some reason, I have found little to no information about this record. It is not even on Discogs! This is an odd omission indeed since there are a couple of rather well-known names on this one like In The Shit and Poundaflesh... The cd was released on Blind Destruction records, probably in 2005, a very fine label created by John from Spite that has been active since the mid-90's and has released some cracking records by Spite (obviously), The Restarts, Concrete Sox or Haywire throughout the years. 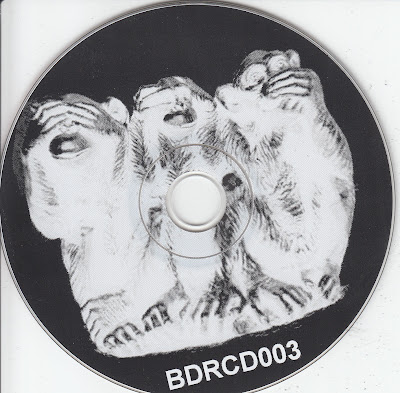 The first band is Da Capo from Bristol. I must confess I don't know much about them other than they had a member in common with the mighty Gurkha (small world). The first song, "Made in Britain" is very reminiscent of Maggot Slayer Overdrive (very small world), albeit in a more refined version. Da Capo has a very "modern", polished sound which works very well with their brand of tuneful but tense hardcore punk, somewhere between aforementioned Maggots, Left For Dead and Debris. Unfortunately, Da Capo's lyrics are not included so you will have to listen closely if you want to know what this bloody racket is all about. The three tracks were recorded in 2002 and reflect what Da Capo sounded like at that time as they evolved into a more rock'n'roll band (or so I read) afterwards.

This System Kills are next and though you may not have heard of them yet, they have Pig and Mark from Rectify and Classified Protest as members, bands with whom you are probably more familiar. Originally, This System Kills were called I Oppose Thee, under which name they contributed a song to the "Barricades and broken dreams "Conflict tribute. Musically, it is not as modern hardcore-influenced as Rectify though the band is still looking in this direction. Despite my legendary dislike for USHC, there are enough good, moody, anthemic tunes to keep me interested. The sound is excellent and the singer sounds a bit like Neil from Debris and Ruin and even like the Templars' (a strange but not groundless comparison if you listen carefully). TSK are probably not a band I would play on a daily basis, but the song-writing is so good here that the three songs make me crave for more. The lyrics to "Red bricks" - the best song of the three - are included and like Rectify, TSK write great, original political lyrics. This one is about the new industrialization and urbanization schemes, how new homes are being built on a massive scale in the country to house the new middle-class and how former mining towns are transformed to welcome this new population obsessed with consuming. Clever stuff written from the heart.

Next are In The Shit, Wales' harder-hitting punk band with three tracks recorded in 2004. This was one of the band's last recordings: it had the bass player on vocals and, let's face it, the line-up wasn't quite as potent as the ferocious first one. This said, this is still solid metallic hardcore-punk in the vein of classic 90's British hardcore punk like Spite, Slander, Truth Decay, Broken (American, I know) or Beergut 100 but I would argue that when they were at their peak, In The Shit were probably the best band of the genre around with songs that were aggressive, angry and heavy - but never overproduced - but kept this typical punk spontaneity that is so often lacking in "real", bands who kneel at the altar of Mosh. More mohawks, less bandanas please. As always, ITS were a serious band as "Why?" is an antiwar protest song and "Abused" tackles the difficult subject of child abuse and how people who have been abused or mistreated as kids can turn into abusers when they grow up in a cycle of violence and pain.

I got to see Poundaflesh in Derby in 2003. As a local band, they were playing at the Gathering of the 5000 gig along with Conflict, Subhumans, Icons of Filth and Lost Cherrees (quite a night it was) and they were absolutely brilliant. Like In The Shit, they illustrate everything that is good about 90's British hardcore punk. Poundaflesh must have formed in 2000 and I think they are still going today in spite of the death of Mark (from Concrete Sox) who used to play the guitar for them a couple of years ago. Sonically, this is really "take no prisoners", "no frills", "in your face" punk-rock we are dealing with. Comparisons to 90's bands like Spite, Policebastard or Substandard are relevant but I would also throw 90's era Varukers, One Way System and Concrete Sox (especially for the recurring metallic parts) in the name-dropping contest. In terms of lyrics, "Paedophile' is about, well paedophiles, and how they should be tortured, their bones broken and burnt alive (they only forgot the disembowelment and the heads on spikes), "The pendulum" is about the dangers of political correctness and how it can affect our judgement, while "Bless the press" is about the media's schyzophrenic and epileptic treatment of "the news" and how the press is full of shit. An angry bunch of lads to be sure.

I am not sure what they mean exactly by that, but Gurkha's plan of "putting the cunt back in the West country" always puts a smile on my face that I shall not wipe. I was lucky enough to see them play in 2005 at the 1in12 club alongside Doom (with Wayne still on vocals), The Dagda, Extinction of Mankind, Bait, Ruin, After the Massacre and Burning the Prospect (show-off time) and they were an absolute highlight as I had never heard of them before. Hailing from Bristol, Gurkha was made up of people from Maggot Slayer Overdrive and, to some extent, there are similarities between the two bands, especially in terms of riffage. However, Gurkha was a much gruffier, crustier affair than MSO, a shift aided by the distinctive vocalic performance of Martin (now the singer for Warprayer and Bullet Ridden) that brings to mind the 90's era of Genital Deformities, Venom and hyenas fighting over a bloody carcass. To say that I think Gurkha was an underrated band is itself an understatement. They are one of the most crushing band I have ever seen with their very own brand of metallic punk fury and I can't understand why far lesser bands claiming the "metalpunx" label got a lot more attention when all they did was writing lazy metal riffs they must have found in Lemmy's bin. Meanwhile, Gurkha played songs that, though metal tinged, remained firmly rooted in the most beautiful parts of the punk territory. Just imagine SDS covering Broken Bones songs or try chopping some fresh Extreme Noise Terror and Debauchery and leave marinade in a 90's era Disorder sauce with GISM leaves and a spoonful of Hellkrusher's "Wasteland". The lyrics are not included here, but two of the songs also appeared on the split with Malignant Tumour, "Wipe that fuckin' smile off your face" and "Disgruntled ex-worker". The two songs have mad-sounding lyrics full of frustration and dementia: "Wipe that smile" is about death, fear of it and body decay while "Disgruntled ex-worker" is about a bloke who goes litterally crazy and wants to get revenge and go on the rampage.

Finally, we have Bomb Blast Men, possibly the most obscure band of the six. It was a post-Dumbstruck band from Nottingham but don't expect old-school hardcore from BBM as they play mean-sounding, direct metallic punk with rough, gruffy vocals that give the songs a crusty feel. I suppose it is not too far from Extinction of Mankind's side of the split with Misery, but with less darkness and more snot and cider, or like Policebastard's more metallic moments. These last three songs have the rawest sound on the comp and they are just perfect to close the record. The drum has this pummelling quality, the guitar is effortlessly dirty and aggressive and BBM's music has "Punk as fuck" written all over it. I remember seeing them in 2003 with Extinction of Mankind and some band from Norway in Leeds and they were pretty good but I always wondered if they were a "proper" band or more of a side-project. Wherever the answer might lie, they have actually reformed with a different line-up (different singer; to be noted that BBM's guitar player is also Bullet Ridden's) and released an Ep entitled "Who is the master here?" (also the name of one of the three songs) on Vex records. I do enjoy the Ep but I don't think it quite conveys the same energy and attitude as the songs on the compilation.

Posted by The Earslaughterers at 18:50