We are finally reaching the last stage of Sonatas in D Major. Thank you for riding with us! We hope to see you soon on the Terminal Sound Nuisance coaches (we welcome men, women and children of course). We would also like to congratulate you for making it this far into yet uncharted punk territories, covered with blind alleys, dark and gloomy corners where feral d-beat bands can roam freely after the gig, looking for the odd dog end and, sometimes, even food. I will try to improve our pertinacious readers' experience in order to attract a younger audience for the next dis-themed series by using new technology. Assuming people got the proper 3d glasses for it, "3d-beat raw punk" doesn't sound too bad, does it? 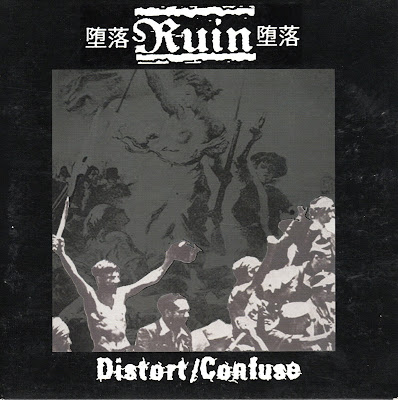 But before thinking about the futuuuuuuure, let's wrap the present series in majestic fashion with one last Ep. If the last part - with Final Blood Bath - dealt with an Ep recorded in 2002, I chose to skip a couple of years for this one, which was released in 2006. There is no particular reason for it, only that Ruin stand for a school of Discharge-influenced hardcore punk music that I had not tackled yet and felt needed to be included given the postulates of Sonatas in D Major, a series meant to cast some meaningful light upon the pre-internet d-beat phenomenon that swept through the 1990's and consolidated and legitimised the artistic practice of emulating Discharge (and later on, the practice of emulating the emulators of Discharge). Although I have to humbly admit that I am not quite the all-knowing cultural figure I wish to be, I still don't think that punks' mania for Discharge, best embodied in the d-beat style, has any equivalent in other subculture. And while I honestly don't know if such a particularism is a good thing or not, I still feel weirdly pleased and proud about this achievement, assuming it is one at all. 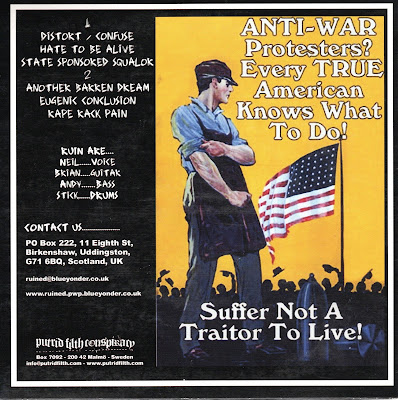 For this last part, we are back to where it all started: Britain. And we are north of the North since Ruin were from Scotland. I cannot recommend enough reading the issue of great fanzine Our Future that deals with Discharge-inspired hardcore punk bands from Scotland as it has an interview with Ruin among other bands like Social Insecurity (whose Ep was previously reviewed on Terminal Sound Nuisance), Oi Polloi and the mighty AOA. If you have never heard of Ruin, you definitely know about other bands the members used to be part of (unless you just stumbled upon the blog while looking for actual sonatas, in which case I wish to apologize but still encourage you to keep reading). In fact, Ruin was far from being the first collaboration between the guitar and bass players, Brian and Andy, since they played together in classic bands Disaffect and Scatha and in the cruelly underrated Debris along with Ruin's singer Neil. As for the drummer, it was none other than Stick, from Doom and many others, a man who, if you add up all the hours he spent beating the D on the drums, is estimated to have spent a whole year of his life (368 days in fact) behind his kit playing variations of the exact same beat. A genuine punk hero. 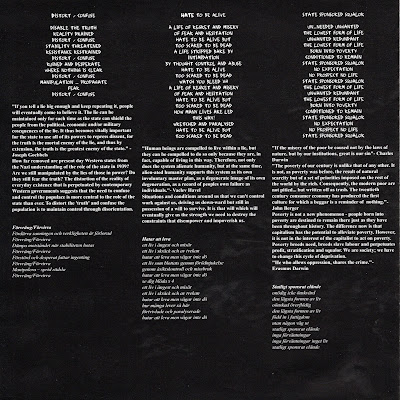 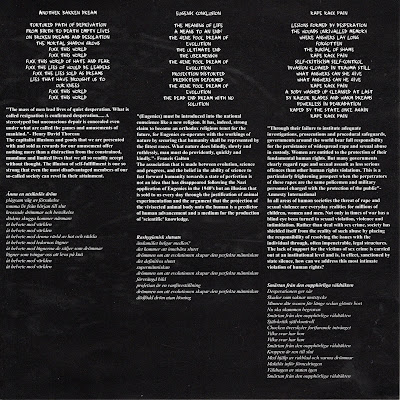 With such an experienced lineup, Ruin were unsurprisingly quick in releasing their first Lp in 2005, entitled Ghost of the Past and released on Agipunk for the vinyl version and MCR Company for the cd. It was a very solid album with some genuinely cracking numbers and a heavy, crushing production that went straight for the throat. Truth be told, Ruin were not a "just like" d-beat band in the same way as Disaster or Meanwhile. The Hear Nothing See Nothing Say Nothing influence is certainly strong and foundational but the band added other dischargic flavours to their recipe, most notably 90's crusty UK dis-core and mid-80's Swedish hardcore. Ghost of the Past certainly set the standards pretty high and everything in that album, from the songwriting, to the musicianship, the lyrics and the visuals, screamt that they definitely knew their craft and were clear about their creative intent, as the inclusion of two tasteful covers (of Disclose and Ultraviolent) confirmed. A split Ep with Pause, from Finland, saw the light of day on Fight Records the same year, with a top Mau Maus cover this time, and another Ep, Distort/Confuse, was released in 2006 on Putrid Filth Conspiracy, a Swedish label based in Malmö and run by Rodrigo (from Intensity, Kontrovers and Satanic Surfers) that was prolific from the late 90's to the late 00's. 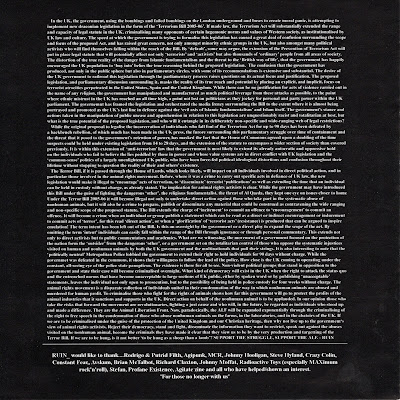 Distort/Confuse is an excellent record of angry, politically-charged, heavy Discharge-influenced hardcore punk. It is a more focused effort than the album in terms of songwriting and probably one of the most intense UK hardcore Ep's of the decade. I am aware that qualifiers such as "intense" or "relentless" often tend to be misused in reviews but I cannot really think of more relevant attributes in this case. Ruin created eight minutes of furious and desperate hardcore that leaves the listener somewhat dizzy. The sonic equivalent of being trampled by an angry hippo (but they are generally angry, aren't they?). I had not played this record for a while before the series and I was surprised at how mean and powerful it sounded. As I said, Ruin did not really play straight-forward d-beat hardcore and opted for a variety of scando-influenced paces that went from fast and pummeling to superfast and pummeling, a bit like how Discard sped up the original Discharge rhythm, if you know what I mean. Mean-sounding bands like Totalitär, Asocial or No Security plainly come to mind, to which you could add the gruff heaviness of local beasts like Excrement of War, Hellkrusher and of course mid/late 90's Doom. The massive riffs sound quite classic but the band always add a twist to the songwriting or use a different guitar texture on a lead or a slight change of pace to keep things unpredictable while staying in the strict perimeters of dis-oriented hardcore punk. It requires a trained ear for the D and Ruin plainly had it. The number "Hate to be alive" is a fantastic reworking of the canonical mid-tempo Discharge song and exemplifies how it can be done with taste. 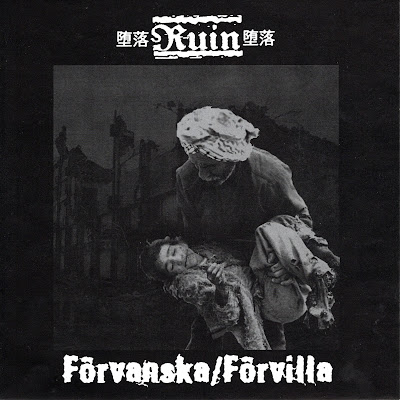 The production is perfect for what the band wanted to achieve, crunchy, aggressive and heavy, the balance between the instruments is solid and Neil is an amazing vocalist, with a low, deep and expressive voice that manages to convey the primal anger and rage adequate to the style and still add on some warmth and genuine human emotion in the tone and accentuation. The singing style combined with the particular vocal tone set aside Ruin for me and I think this voice is the ideal vessel for lyrics that are all accurately political and belong to a specific context (the mid-00's war on terror, the rise of austerity politics, eugenics, rape culture) instead of playing with the usual Discharge mythology. If the lyrics rely on the classic syntax and metrics of Discharge-inspired haikus, they are complemented by explanatory texts developing the political message and Swedish translations (for the label's compatriots). There is also a long essay about the sociopolitical climate of mid-00's Britain and especially the Terror Bill which completely criminalized the ALF and other groups promoting direct actions and set the stage for even more state control (and state violence of course). Interesting read highlighting how relevant Ruin were trying to be.

The next and last Ruin record was a 2007 split Lp with TRIBE, an ace metallic tribal crust act with Angus and Brian from Scatha and members of Fastard, and it was another scorcher building on a similar basis of Sweden-meets-the-North in a Discharge-themed pub, this time with a stronger anarcho vibe (and a Raw Power cover!). Quality stuff. 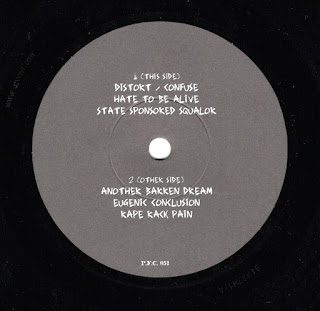 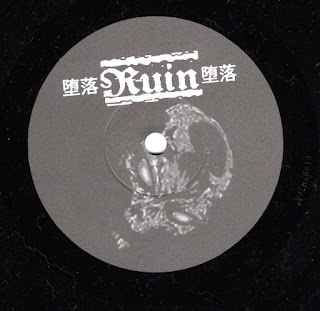