How criminal would the absence of Meanwhile have been in the context of a series dedicated to d-beat music? To exclude the most consistent "just like Discharge" band to ever come out of Sweden, an exploit that is no mean feat to say the least, the band whose very artistic path was heavily criticized on Active Minds' Dis Getting Pathetic... cult Ep, would have looked as either a silly provocation or the definite proof that I have no idea what I am talking about.

Although it is technically Meanwhile's first appearance on Terminal Sound Nuisance, the band's former incarnation, Dischange, was previously dealt with on two occasions: the split with Excrement of War and the Crust and Anguished Life compilation cd. I am not sure why the members felt the need to switch from Dischange to Meanwhile in the mid-90's (the first record under the Meanwhile moniker was the Remaining Right: Silence 1995 album). Maybe they realized that "Dischange" was too goofy-sounding and that the idea to combine the dis prefix with a random word made them look a bit silly after all. Besides, by '95, there were many bands rocking a Dis-name, especially in Sweden, so that, despite them objectively and gloriously pioneering the genre, they may have thought that picking a Discharge-related but dis-free moniker was a wise move. And so they went for a Discharge song: Meanwhile. The practice of selecting a Discharge hit as a name for your Discharge-influenced band is an old, time-approved one that many bands (Fight Back, Decontrol, Realities of War, Visions of War...) have relied on throughout the years. It provides your band with a Discharge reference that is quite explicit but that still requires people to be familiar with the Discharge gospel, maybe not all faithful but at least believers. And so Dischange renamed themselves Meanwhile, and of course "Meanwhile" is a brilliant Discharge song that is beloved by all although it is not their most transparent title. But Meanwhile's music speaks so much for itself anyway, loud and clear, that you couldn't sound much more like Discharge and stand for the d-beat subgenre than Meanwhile do. They are that iconic. This said, I tend to think it is an objectively pretty strange name for a hardcore punk band, and while I love the implications hidden in the meaning of "meanwhile" (the idea of different realities for instance), it still is an adverb, a lexical category that is uncommon in the naming of punk bands. Let's face it, not many hardcore unit are called "Henceforth" or "Afterwards" and I don't remember thinking about the Discharge song the first time I heard Meanwhile (it was on The Best Crust Album in the World ever! compilation cd, a deceitful work if there ever was one), I was just a little confused as to why they weren't called Disdoom 47 or something unequivocal like that. 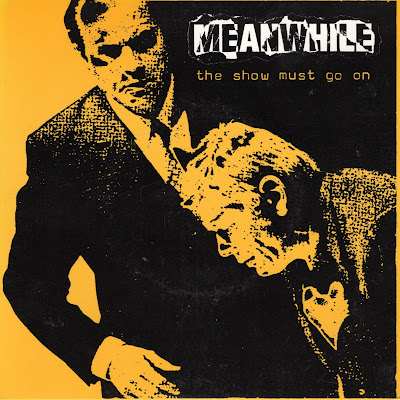 If you are not familiar with Dischange/Meanwhile, here are a couple of details you should know. They were from Eskilstuna, Sweden, and started playing as a three-piece under the name Dischange in 1989. Jallo, who also drummed in No Security, was the guitar player (and vocalist at first) while Kenko, who also played the guitar for No Security at the time, was beating the D in Dischange, so that it could be quite relevant to see the band as some kind of Discharge-oriented side-project when they started. After the split Ep with Excrement of War, Dischange recruited a proper singer, Jocke, a tremendous addition to the band as his rough-hewn shouted vocal style fitted the Discharge-worship perfectly: aggressive but not overdone with the proper Cal-inspired prosodic elements. The band progressively got better and better, rebaptized themselves Meanwhile, and recorded what is arguably their best work in 1996, their third album entitled The Road to Hell. I personally enjoy everything Dischange/Meanwhile did, but I rate that album as one of the finest examples of "just like Discharge" d-beat with some songs being genuine punk hits. 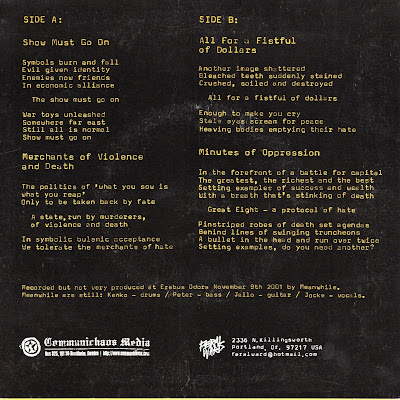 The Ep The Show must Go on was recorded in November, 2001, and was the follow-up to the very strong Same Shit New Millenium 2000 Lp on Sound Pollution. By that time, Meanwhile had started to incorporate more rocking elements to their d-beat tornado, reminiscent of Motörhead at their hard-hitting best. In general, I get extremely suspicious whenever I read phrases such as "motörcrust" or the even more appalling "d-beat'n'roll". In fact, if you want to get me out of a venue, just tell me that it is a Metal Punk Death Squad night and that a "d-beat'n'roll" band is playing next, and I will rush outside and remain in hiding for at least a few weeks, protecting myself from the aftermath of such abominations... But yeah, I am not a big Motörhead fan and the chances that you are going to spoil a decent d-beat song with lame Lemmy impersonations are always high. But Meanwhile can and do pull it with class as their rocking d-beat sound actually convincing, heavy and groovy, without overdoing or overproducing it and keeping it angry. While their '00 Lp, and most of their releases really, enjoyed a solid production emphasizing the Discharge power without sacrificing the punk rawness, The Show must Go on is purposefully underproduced, or, as the band put it, "not very produced". Seeing that Kenko is a sound engineer at Communichaos Studio, the raw sound is not accidental. It could be an attempt at sounding as direct, spontaneous and aggressive as possible, not unlike some sort of return to the hardcore punk roots out of a desire to sound meaner and grittier, maybe as a counterpoint to the massive production that many d-beat/crust bands opted for at the time (like Disfear or Skitsystem). Whatever the intent was, I love this Ep. It opens with the eponymous "The show must go on", a one-minute long, crunchy and rocking mid-paced dischargy number, while the three remaining songs are anthemic bass-driven raw d-beat scorchers with a primitive Motörhead vibe. It sounds mean and direct with a dirty rock'n'roll energy that works well with the format (an full album with such a production would have been riskier I suppose). That the result sounds so pissed and dynamic shows that even with, or maybe especially with, such a limited genre as orthodoxal d-beat, you need to focus on writing solid songs in order to succeed and no amount of guitar layers or distortion pedals will change that. Genuine d-beat raw punk.

The Show must Go on was a cojoint release between Communichaos Media, run by Kenko, a label that also put out materials from Imperial Leather, Burning Kitchen (he also played in both) and DS-13, and Feral Ward, a well-known Portland-based label run by Yannick from Tragedy that reissued the two first Meanwhile albums and the 2008 Lp Reality or Nothing, all top-shelf works. 1500 copies of this Ep were pressed so that it is not too difficult to bring this lovely geezer home. 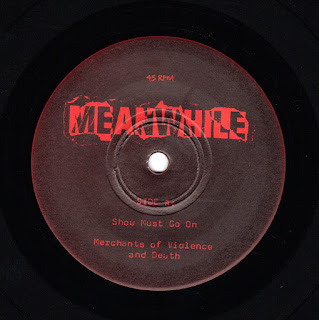 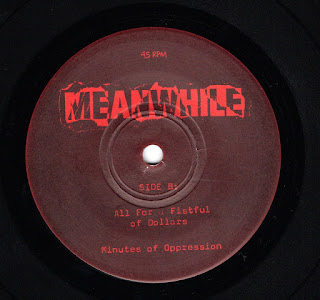 The D must go on
Posted by The Earslaughterers at 16:36