That one was definitely just around the corner. 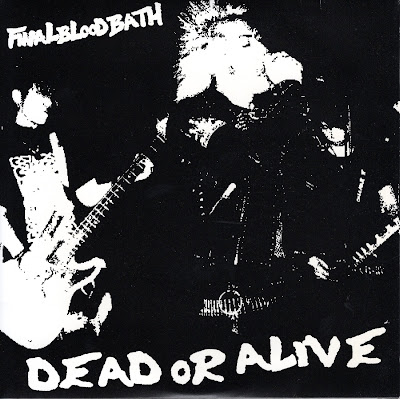 The price of pixels


As tackled in the previous entry, a common way to pay tribute to the Stoke-on-Trent deity has long been to adopt a title taken from the holy scriptures - with Why being obviously the Old Testament of a vengeful d-beat - as your band's name. It is probably the most demonstratively effective fashion to show your love for Discharge to the world and, more importantly, to fellow Discharge-lovers who may be tempted to get your records and help you cover your petrol expenses during tours. If you use the classic Discharge font not just once but twice on the record cover (for the moniker and the title), then it clearly screams that you mean business and see yourself as a serious contender. And finally if one of your songs has the same name as a Discharge anthem but is not a Discharge cover ("Decontrol" in the present case), then it is undeniably synonymous with demanding a shot at the World D-beat Federation title. It is a bold move that reflects an unbreakable self-confidence and possibly feeds on an Icarus complex but I suppose that you could see Final Blood Bath in that light after all. 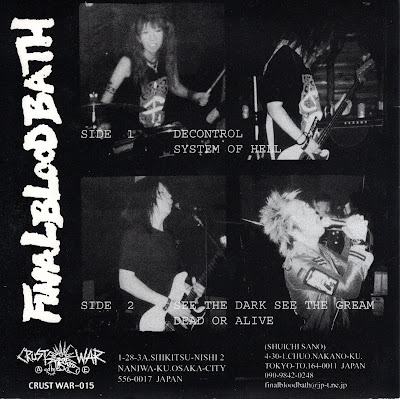 There is not much information floating around about them but they were from Tokyo and must have formed in 2000 seeing that there is a live tape from a gig that took place in March, 2001. A eight-song (demo?) tape entitled Dead or Alive was also released, probably before the Ep's, but I haven't heard it. This tape is still quite fascinating since Final Blood Bath did not merely include the Discharge font and other references on the cover, they went further and re-used the Fight Back cover picture. Of course Active Minds did the same thing a couple of years before but the point they were making was of a very different nature and, as usual with them, was the strong means to formulate a strong criticism of d-beat as a subgenre, the validity of which they were arguing against (a battle Active Minds obviously lost as subsequent years confirmed). Final Blood Bath's use of the same Discharge photograph comes from the completely opposite critical stance: the picture is both an overt tribute and an identificatory trope. Still, if you think about it, Final Blood Bath basically put a picture of another band on the cover of their own tape, an action turning the classic Fight Back band shot into something akin to a religious representation, an icon that far transcends what it originally depicted - teenage British punks playing live in the early 80's - to become a symbol, the signified. 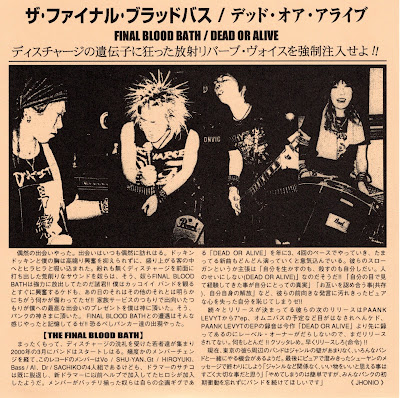 Final Blood Bath (who will be referred to as FBB from now on because of global warming and that) picked a great Discharge song for their band although it is admittedly a bit of a mouthful. But then by the early 00's, the catchiest Discharge song titles had already been taken and bands had to resort to names like Four Monstrous Nuclear Stockpiles in order to exist at all. Those were tough years for the D as the 90's wave was surely fading and only punk fanatics like Disclose or Meanwhile still engage willingly in the strictest Discharge worship. FBB belonged to that category of bands for whom the Discharge '80/'83 canon was creatively-speaking both the basis and the aim to their sound. Meaning that they carefully used some classic Discharge elements in order to craft a new and paradoxically fresh-sounding tribute to Discharge. I remember that the mate of mine who was distributing Crust War Records in Paris at the time introduced Dead or Alive to me in such a fashion: "they are an absolute Never Again rip-off with cheesy vocals and a Japanese vibe. Great stuff". And I guess he was right. He also described Zoe as "terrible Amebix-like heavy metal with members wearing make-up. It's crap and you will love it", and I guess he was also right. Contrary to most of the 90's d-beat legions, FBB did not try to go for harsh, hoarse vocals but rather opted for a reverbed tone highly reminiscent of Never Again but also and even more so of the more metallic, thrashier post-1982 Discharge. Until quite recently, the general consensus was that the last great Discharge record was the State Violence State Control Ep, but the 2010's have seen a growing number of people claiming that Warning or The Price of Silence were equally great (some raving lunatics even believe that Brave New World is not that bad if you forget that it is a Discharge Lp... The fools!). I don't dislike those records but never really loved them as I distinctly remember that the songs were at the end of my first Discharge cd (one that contained the Hear Nothing Lp and the '82/'83 singles) and I used to wonder why all the UK bands had turned shite around the mid-80's, a principle I had theorized after suffering a double cd Blitz discography. But anyway, the influence of such records as Warning and The Price of Silence was rather low on the d-beat production at the time so FBB's song "See the dark see the gream", an ace bouncy mid-paced blend of "The price of silence" and "Born to die in the gutter" sounds refreshing in the context and clearly points to Final Bombs in terms of intent, the legendary d-beat-free Discharge-loving heavy band. Although I have to say that I have no clue as to what "the gream" is meant to be (a grim gleam?). If you listen closely to Dead or Alive, you will find many details, dis-nuggets (some bass lines, intonations, guitar leads and so on) that refer to '82/'83 Discharge which, in the early 00's, paradoxically made FBB's songwriting original in its referential range. The basis for the cake is devout Never Again worship but the icing is clearly '82/'83. I just love that Ep. My only tiny complaint would be that the effect on the vocals, if it does achieve the intended result in terms of recreating a "1983 Cal vibe", lacks a little in aggression. But this is the price, the price to pay. 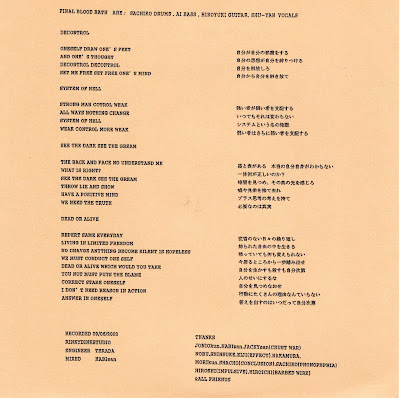 Dead or Alive was recorded in June, 2002 and was Crust War's fifteenth release and it was mixed by Habi, the drummer of Gloom and Defector, who managed to confer a raw but energetic vibe to the sound. The cover of the Ep is a live shot of FBB and it is full of leather and studs and charged hair and it is perfectly natural. What I love however is the (involuntary?) mise en abyme that lies in the presence of a Fight Back patch on the singer's right shoulder. It is a live shot inserted in a live shot, the second live shot - the cover - being a reference to the first one - the detail. Amazing, right? What I don't quite love as much is the highly pixelated quality of the cover, a common flaw in those years. It is odd to think that older records have aged much better visually than those that used a digital technology that was in its infancy. I don't remember noticing the pixels much at the time but in retrospect I cannot believe labels and bands thought they could get away with such results... FBB recorded another Ep just a week before Dead or Alive, a self-titled work released on Paank Levyt that also comes recommended but is not quite as good in my opinion (it is another pixel fest of course). In 2003, FBB then shortened their name for Final and also changed direction with more of a metal-punk vibe and more studs. They recorded an Ep for Crust War under the Final moniker that I personally find really enjoyable and powerful, a bit like a cross between Painajainen, Broken Bones and first-raising Japanese hardcore (they called their new style "Kamikaze gravecore metal" which makes me giggle all the time). I only wish they had done a full-on cavemen crust band called Final Bath. That would have been legendary. 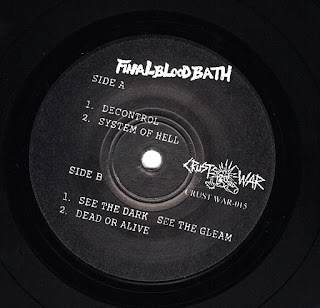 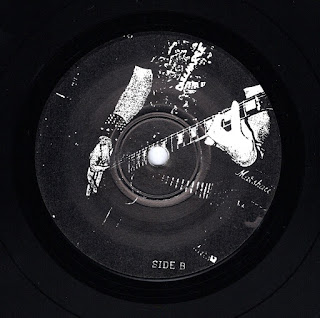 Posted by The Earslaughterers at 10:14