Don't act so surprised, you could have seen this one coming from miles away. It was high time I dealt properly with the Swedish fury that came out of the 1990's and as a result, thanks to the utmost seriousness and humility that characterize me, I proved to be, as per usual, amazingly successful. But let's get to the customarily lengthy introduction first. 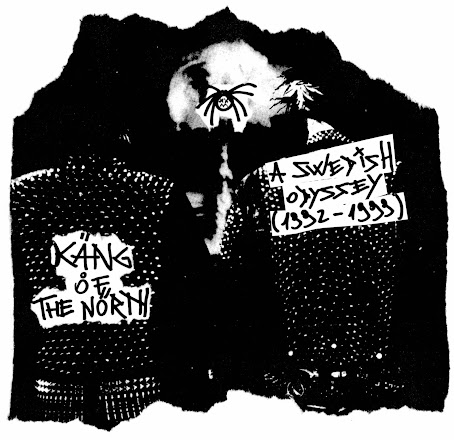 It is true that I have already touched upon the 90's wave of Dis-inspired hardcore punk that swept across Sweden in the two classic series about D-beat and Discharge love, namely The Chronicles of Dis and Sonatas in D Major, and with the glorious compilation The Beat to End All Beats. Besides, Sweden's crustcore heroes like Warcollapse or 3-Way Cum have already been reviewed at length on Terminal Sound Nuisance and even invited to the famous Christmas celebration A Crustmas Carol. So what I mean to say is that there is little point in rephrasing what has been thoroughly developed before. However, the scope of Käng of the North (I mean, lol, right?) is quite different. Indeed, it aims at covering all the different branches of Dis-centric punk schools that bloomed vigorously in Sweden while the previous series about the specific conception and evolution of d-beat and crust had an international focus, although Swedish bands obviously played an important part in both. Therefore, the inclusion of Meanwhile or Warcollapse on Käng of the North has to be seen from the synchronic perspective of the national explosion of käng-inspired hardcore and crust music in the 90's.

Even a well-meaning and open-minded individual untrained to the subtleties of the D-related subgenres would probably feel a little lost with this cryptic compilation and think that he or she has just been cruelly subjected to 75 minutes of the exact same song in a row played by 58 bands and, well, it cannot be denied that Käng of the North can turn into a rather confusing experience, albeit a potentially very pleasing, if not epiphanic, one. The primary purpose of the selection is not, however, to demonstrate that 90's Swedish discore was redundant and generic, although to an extent it was deliberately repetitive indeed, but to illustrate the subtleties and the very significant variations in terms of sound, pace, musicianship, vocal tones (and of course the degree of Discharge love) there were between the different subgenres. Käng of the North is as much about similarities as it is about differences and both can be very enjoyable. After all, isn't the devil in the d-tails?

The whole range of Swedish brutality is represented in Käng of the North, from the contemporary gruff 90's eurocrust style of Holocrust or Genocide SS, to the raw mangel mania of Krigshot or Dismachine, the "just like Discharge" style of Meanwhile or Discard, the raw retro punky käng style of Diskonto or Aparat, the massive and nasty rocking sound of Driller Killer or Wolfpack, the shitlicking chaos of Discontrol or Fucking Chaos (!), the rather clean and precise sound hardcore sound of Svart Snö or Sunday Morning Einsteins, the death-metallic vibe of Skitsystem, the pub-friendly cruising d-beat of Fleshrevels and Avskum, the anarchocrust vibe of Scumbrigade and ENS or the unbeatable riff-driven raw and raspy catchiness of scandicore's references Totalitär and No Security. 80's Swedish hardcore and its historic Discharge roots are, in varying degrees, the cultural and creative ties between all these bands and you will notice that, while some bands went for very clean and heavy "modern" production, others were quite content to keep a rough and ready sound, both takes of course making for distinct styles of hardcore but also conveying different intents and subjective tastes, although the bands could be equally influenced by Anti-Cimex, Doom or Svart Parad.

Undeniably, Sweden was a unique case in the DIY international punk scene in the 90's - and it still is even if many scenes have copied the käng style outside Sweden from the 90's on - and its number of Dis-oriented bands is particularly impressive (in fact, from a French point of view, it even looks insultingly superior). There could be many reasons for the development of this trend: the country's own specific hardcore background with its unlimited passion for Discharge, Mob 47 and Anti-Cimex combined with a couple of genuinely excellent and recognized driving local bands; the worldwide crust and extreme metal explosion in the early 90's; a strong rock culture nationwide; an easy access to practice space and instrument and nothing better to do in the winter. Or perhaps there was something in the water or, even more plausible, after misunderstanding the lyrics of Discharge, some benevolent punk pilots just dropped hundreds of copies of Why and Hear Nothing - literally dis, dis from abooooove - on Sweden's major cities.

We either live in strange times or punk's intellectual laziness is just more visible today. Whereas the overwhelming quantity of music instantly available is staggering, in parallel, most critical receptions of old and new punk works have been paradoxically reduced to monosyllabic comments on social media or youtube (when it's not just casually "liked") while internet's vicious equalizing process has caused the decontextualization of punk music. As a result, very different-sounding Dis bands are often being dumped in vague, ill-defined "crust" or "d-beat" categories, that are meant to stand for any band that plays faster and harder than Black Flag or GBH. Hopefully, the compilation will emphasize the sometimes subtle, but nonetheless real, crucial differences that define and distinguish Dispense from Dissober. As I pointed out, all the bands are essentially Dis-centric entities building on 80's käng in order to revive, rework, develop, replicate, toughen up, crustify or dischargify the legacy and I left out the US-influenced Swedish bands, the slower crust units, as well as the melodic hardcore, the 90's anarchopunk and the grindcore acts. I tried to be as exhaustive as possible but some 90's Swedish bands fitting in with my analytical postulate of research may very well have escaped my accurate panoptic vision, so feel free to add any band that I unluckily missed in the comment section. Or better even, send me the lossless files with the full bio will you?

I would like to thank Zeno for the rips he sent me a while back and proved to be very helpful in the making of Käng of the North. Thanks mate.

Here are the culprits that are bound to lighten up your New Year's Eve lockdown party, all tracks were recorded between 1992 and 1999 and I did my best to offer quality rips as usual:

Posted by The Earslaughterers at 13:57