This entry might prove tricky to write since I am not much of a Disgust fan. Don't get me wrong, I do enjoy Throw Into Oblivion tremendously, but as a band in the specific context of the 90's, I cannot say Disgust, as an entity, are particularly inspiring. I cannot really imagine a poignant, tear-inducing biopic about them for instance. For what such a record is worth, they were the first to be advertised an "all-star" d-beat band in History, demonstrating that, even regarding a subgenre as pure and noble as the holy D, one must remain quite vigilant. I am not saying that they sullied the respectable and legitimate practice of being Discharge by proxy, but their career did not exactly contribute to its good name. 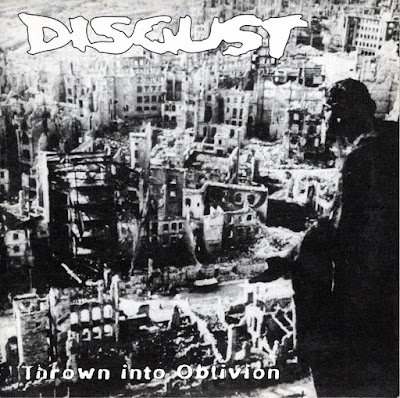 Disgust's origin story started well though. Dave Ellesmere - he who played the drums on a record you may have heard about called Why - was so disappointed with his former band's latest offering, Massacre Divine, "we were horrified at what they were doing" he said, his voice heavy with sorrow, and who could blame him,  it is a horrifying record indeed, that he decided to form a band that would sound like Discharge should still have been sounding like, namely like their '81/'82 era, "pretty much a strict template that you don't want to mess with". In order to turn these noble aspirations into reality, Dave picked up his favourite guitar and proceeded to recruit Steve Beatty, then owner of Plastic Head Distribution and formerly the drummer for anarchopunk band Stone the Crowz in the mid 80's, on vocals, Lee Barrett (who worked with Steve at Plastic Head) on the bass and Andy Baker (ex Varukers/Warwound/Sacrilege) on the drums. Unfortunately, this lineup lasted only a couple of rehearsals and promotional leaflets proclaiming with grandiloquence the second coming of Discharge in the guise of Disgust, had to be reprinted with a new lineup, Steve switching to drums because Andy left and Barney from Napalm Death (yes, I know) taking on the singer position. Because metal bands always have, by law, at least two guitar players, Gary Sumner, whom Dave knew from their glory days together in The Insane and Blitzkrieg, joined as well. With such a long "ex members" list, it is little wonder that Earache, smelling blood and cash, signed Disgust before they even played live. But then, Barney left and Disgust, without having set foot on a live stage, experienced yet another lineup change, with the arrival of England's prime gargling growler, Dean from Extreme Noise Terror, behind the microphone. It was this lineup that recorded the Brutality of War Lp in 1993 for Earache Records. 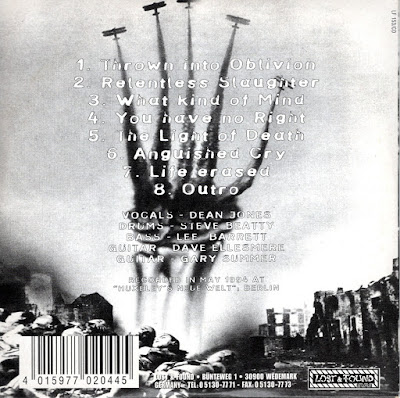 The high five of the apocalypse

Your assessment of early Disgust will totally depend on how bilious you are feeling today and on your level of cynicism. Of course, you could see the whole operation as a quick and easy way for a bunch of no longer relevant ex punks (is someone yelling "sellouts" at the back?) to make a comeback in the hardcore and extreme metal scenes. As far as I am concerned, Disgust's backstory sounds like the corny genesis of a heavy metal band made up of lads who used to play in bands that were kinda famous at some point (but to honest, a lot of hardcore supergroup have been promoting themselves exactly in this fashion for years in the DIY scene). You could also debate the idea that they were an actual band at all, since, being all spread out across the country, they pretty much wrote the songs on the day in the recording studio and, by their own admission, did not rehearse much, if at all, and did not get along well with each other so they cannot have done many gigs. Not really the Network of Friends mentality if you ask me. So even though Brutality of War was released the same year as Dischange's Seeing Feeling Bleeding, Disclose's Once the War Started and Disfear's A Brutal Sight of War, it can hardly be said that they were comparable works, since the aforementioned trio of Dis were just young hardcore bands that were part of the DIY punk fabric and not a so-called superband supported by a big metal label. So even though the output can and should be compared, the bands as entities and the contexts of production cannot. As for the intention behind the music, I am not in a position to pass judgements or attribute punk points (I ran out of them a while ago). I would hazard the opinion that Disgust's stance looked more opportunistic than Disclose's romanticism, although I have no doubt that the members of the band all dearly loved Discharge. In the end, a fitting description could be that Disgust was the perfect introduction to d-beat's stern extravaganza for your average metalhead. 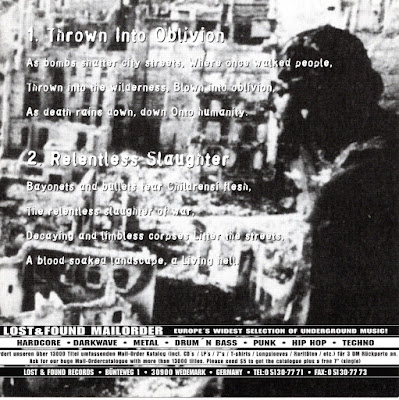 This said, and as peevish as my vision of the band can be, I have absolutely no doubt that the lads truthfully understood and related deeply to vintage Discharge. As Dave confessed, Disgust was meant to be a Discharge tribute band and on that level there is no denying the sheer raw power of Brutality of War. It is a great d-beat album, germane to the proper codes inherent to the genre and it basically hits all the right buttons. Apart from a couple of odd-sounding arrangements with the guitars (the one reserve I would formulate about the Lp is the slightly sloppy coordination between the guitars at times, which is surprising given the resumes of the people involved), Brutality of War does not fall in the usual traps one would be bound to associate with the idea of a d-beat album released on Earache in 1993. First, it is not an overproduced metal disaster, which would have been the biggest and most predictable mistake (one the band would eventually make). Of course, the production is clear and well-balanced, and objectively much cleaner than, say, on the Dischange Lp's, but it sounds like a punk record and not like an extreme metal one: raw, energetic and aggressive and it manages to reproduce Discharge's relentless brutality well enough. You can tell that the guys were really focused on dischargian mimesis and they completely deserve their inclusion in the "just like" category. I mean, even Dean does not overdo his proverbial growls and tries his best to melt in the collective D; which is how it should be done since, if anything, d-beat is a mystical sonic experience that, when well executed, transmits an uplifting feeling of harmony and of togetherness with the impending self-destruction of humankind, a bit like with psychedelic rock but with speed and cider instead of lsd. Brutality of War sounds and looks like a classic d-beat album and Disgust is a brilliant dis-name, these facts of life have to be dealt with as much dignity as we can muster.

Thrown Into Oblivion a live recording, first released on vinyl as an Ep in 1995 and on cd in 1997, both formats on the notorious Lost and Found Records from Germany. It was recorded during a Disgust's performance in Berlin at the Festivals of Hate tour that saw them share the stage with Cannibal Corpse, Samael and Morbid Angel, a lineup that shows how involved in and committed to the punk scene Disgust were as a band. In spite of an awkward moment when Dean invites, very loudly, the Cannibal Corpse bloke to grunt on stage during a song (I hold nothing against Cannibal Corpse but am completely indifferent to them), displaying once again that kind of corny metal festival mentality, Thrown Into Oblivion is, and it pains me a little to say that, a thunderous d-beat record. If Brutality of War felt a tad long and redundant in places (the Lp could have done without a few songs to be fair), Thrown Into Oblivion is a short sharp shock of Discharge-loving hardcore punk. The sound is bloody huge, and of course it would be, it is a metal festival, but the brutality of the set , made up of the best songs of the album, is awe-inspiring. That's what the end of the world should sound like. Eight songs of crushing "just like" d-beat that abides by the inexpugnable laws laid by the Stoke-on-Trent apostles who saved punk-rock in 1980. I guess it would not be erroneous to point out that Dean is a bit loud in the mix but his presence has never been subtle on stage so that was to be expected. The band is otherwise really tight, in spite of the scarcity of their rehearsals, and if you are looking for the sonic equivalent of being powerslammed by the Hulk wearing a studded jacket with Discharge painted on his back in order to make your friday livelier, you have just found the correct artifact. 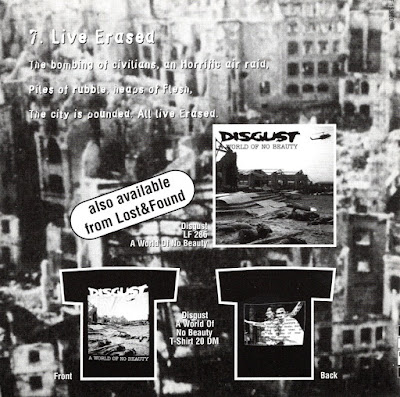 All sizes for men, women and children,


The cd itself comes in a cardboard sleeve and sadly looks like a promotional giveaway rather than the best example of a live d-beat album recorded in the 90's, which Throw Into Oblivion objectively is. And I hate when ads for band merch find their way onto the insert. I have just bought the bloody cd already, let me breathe. Disgust would record the mediocre A World of No Beauty for Nuclear Blast (a metal label once again) in 1997, an album that chiefly made all the mistakes that Brutality of War wisely managed to circumvent. It is the perfect example of what a d-beat album should not sound like, so I guess you can thank the band for providing a counterexample: an overproduced, comlacent, uninspired metallic d-beat mess that is gruelling to listen to. As for 2002's The Horror of it all..., seldom has an album worn its title as aptly as this one. With only one original member from what was not really a proper band to begin with, this last Disgust album is to be avoided at all cost and I feel a bit sad for Crimes Against Humanity Records to have been entangled with what was essentially a crime against d-beat. 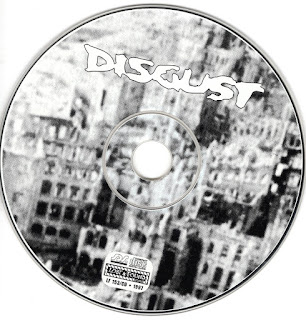 Thrown into disgust
Posted by The Earslaughterers at 11:42