What does this word convey to the average wanker on the street? Clichés like football, beaches, parties, favelas and transexuals. I remember my stepmum telling me in a drunken state that she had sunbathed in Brazil more times than she could remember, and thus was a bit of a cultural expert, and that she couldn't possibly imagine Brazilians playing punk because it was not in the "Brazilian mentality". Of course, she didn't use the word "punk" because to her, anything faster than Oasis sounds like noise (or "ruido" in this case). The next morning, I played Rot and Brigada do Odio really loud, and I proved my point. Sort of. 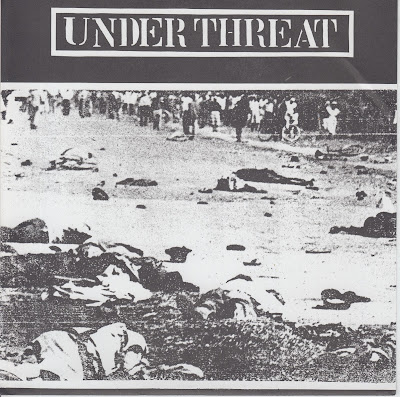 What does the word "Brazil" convey to me? That's an easy one: in-your-face, intense, sloppy punk brutality. I am not going to do a dissertation about Brazilian punk since the country has had a long, prolific and dense love story with punk and metal for the past 35 years. But there is undeniably such a  thing as a Brazilian punk sound so that I can always spot a band from that area when I hear one. For some reason, crust was never Brazil's favourite genre and while they embraced hardcore and grindcore (and anything brutal and fast fast), they never really seemed to fell for Amebix-type bands. Acts like Extreme Noise Terror, Doom or Disrupt were certainly influences on many extreme bands but there were actually few local bands that played all-out crustcore, as if they had picked some elements from it in order to make their own stew, rather than follow the crust trend. The 90's provided many bands that were crust-influenced (like Subcut or Cruel Face for instance) but few that were actually crust if you know what I mean. 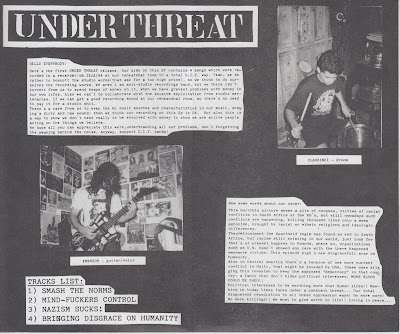 There are exceptions to this of course, and bands like Dischord, Masher and No Prejudice definitely carried the crust torch as brutally as they could. And you had Under Threat, a band that started as a side-project of the mighty Rot's drummer. Like the vast majority of Brazilian punk bands, Under Threat were from Sao Paulo (one of the world's punk capitals), and like most of their extreme music comrades, they were incredibly sloppy. Now, they were not "sloppy" in the same sense that the first demos of Disorder or Doom are sloppy. In that context, "sloppy" implies a sound that is direct and raw, if not rough, and yet intense and completely comfortable. It is not even a matter of technical abilities as the geezers can play, they just think that a DIY rehearsal sound conveys the energy and essence of the genre better than a proper studio. As Under Threat wrote it themselves on the Ep's insert:


"There's a care from us to keep the Hc music sources and characteristics in our music, showing a dirty and raw sound; then we think our recording on this Ep is OK. But also this is a way to show we don't need really to be involved with money to show we are active people acting on the things we believe".

If you ever need a quote to illustrate the difference between the 90's and our present decade, then look no further. Under Threat didn't try hard to have a "raw punk sound", they didn't need special effects, they didn't need a studio and they didn't even need a bass player (yes, you are reading correctly, on this recording Under Threat were a fucking duo!). They just came in their own DIY practice space and unleashed a barrage of simple and effective distorted crusty punk. That's probably where a lot of the typical 90's Sao Paulo punk sound originated from: they didn't try to sound, they just did. And that's why a band like Neurose Urbana will always be more "raw" and aggressive than its heirs. Now, it doesn't mean that there was never any level of production involved or that the songs are rushed, but it underlines a certain lack of self-reflexivity and self-consciousness that is refreshing when compared with the abusive and excessive self-referentiality of current days. 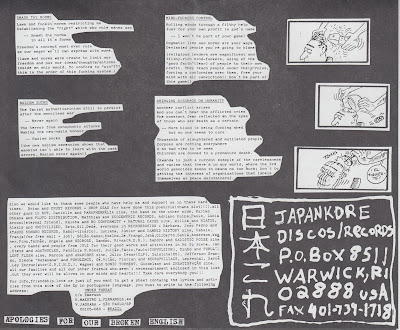 But back to our lovable sloppy slice of crust. This was Under Threat's first release and it must be said that their subsequent split Lp with Battle of Disarm or the split Ep with their noise comrades Dischord were not as sloppy and rough. The first time I listened to these four songs, I couldn't help but smile as it sounds really thin, very much like a tape recorder was placed in the middle of the rehearsal room. Some of you will probably think that it sounds like shit, but I personally find the Under Threat side quite marvelous as it epitomized the energy and the exuberant aggression of early 90's crustcore. Just imagine the first take of the first Disrupt demo but with only two members and you won't be too far. Just simple, fuzzy, fast, pummeling, dual vocals crustcore. And what vocals they are! They are so over-the-top and uncontrived that it works perfectly for the genre. This is miraculous practice room Sao Paulo crustcore and you need these songs in your life. 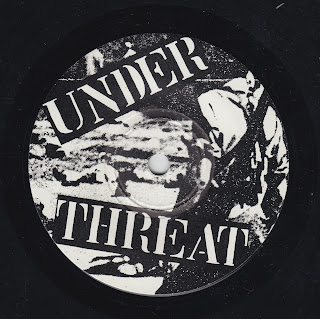 Following this Ep, the band got a little more serious, with one full-time singer, a bass player and a second guitar. They gradually went for a slightly more Scandinavian, crusty D-beat style, and even though their sound improved significantly, they always kept that "sloppy and proud" touch. Lyrically, Under Threat proved to be quite political, despite the broken English, and even wrote a short text explaining their cover choice for the Ep and how a picture from the Apartheid era was still relevant not only to South Africa, but also to Latin America. 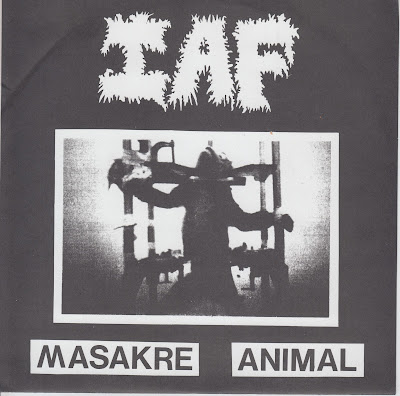 On the flip side are three songs from IAF (meaning "Ideal Anti Fascista") from Barcelona. Believe me, after the Under Threat side, they will almost sound overproduced. IAF existed for 10 years, from 1994 to 2004 roughly, and involved old-timers from bands like Violent Headache and later on Mobcharge and Totälickers (and probably many others). This split Ep was the band's first offering and it is a relevant look to what the band would come to be not so long after. While their 1998 Ep or the 2000's split Ep with HOW showed a strong influence from the faster brand of Swedish hardcore (think Scumbrigade meets Disfear) and super fast hardcore, this 1994 record has punkier production and songwriting that reminds me of mid-90's anarchopunk bands like Antiproduct or Disaffect but with a Dropdead touch. It is an enjoyable listen actually and I strongly recommend their Sludge Records follow-up. Lyrics are, obviously, of a political nature, this time with an emphasis on animal suffering and corridas. 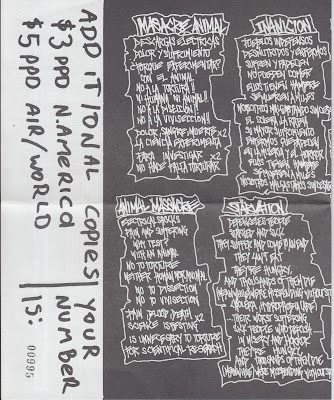 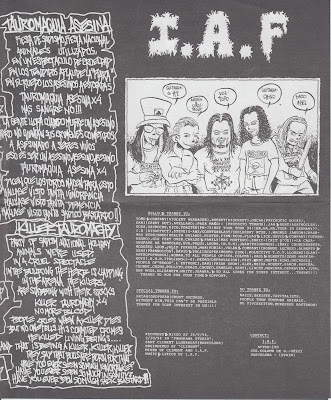 This split Ep was released on Japankore Records, a small label run by Dropdead's drummer that was originally dedicated to putting out noisy Japanese punk-rock like Disclose. Well, Under Threat were from Brazil but they still gave the Japanese a run for their money in terms of distortedness, although I am sure their recording budget, if there even was one, was much lower, not even the price of a Disclose Ep on Discogs in 2015. 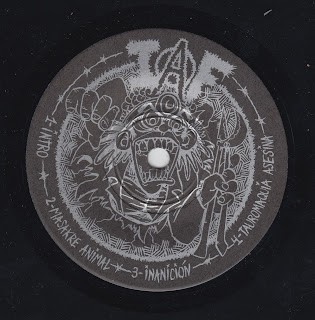 Posted by The Earslaughterers at 16:20